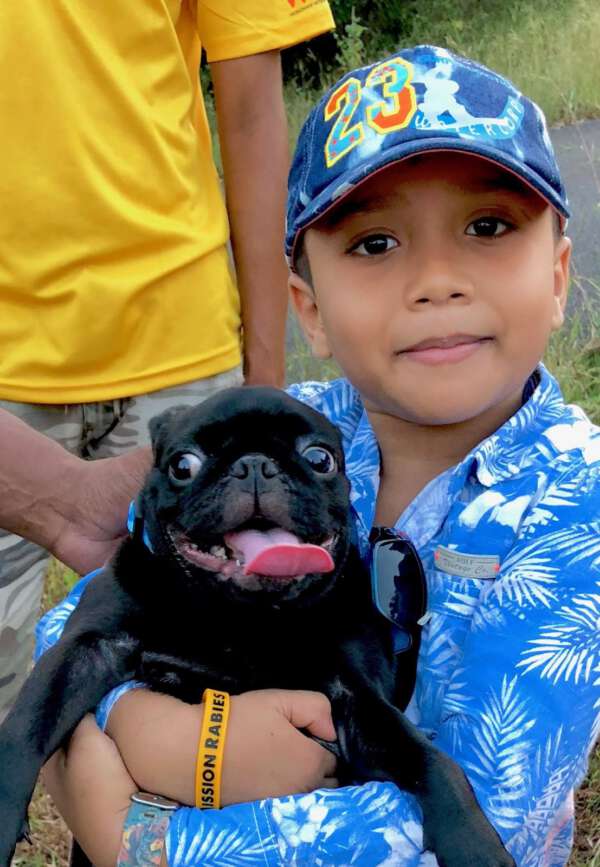 In my previous post, I described Goa as a city of crazy contrasts and contradictions, and that’s true. There is one thing, however, that remains consistent about Goa, and that is its residents: the kindest, friendliest, and most appreciative people I’ve ever had the honor of meeting.

Although I knew that the impetus behind Mission Rabies is to reduce the incidence of rabies in both people and dogs, as a veterinarian, the initial appeal of the project for me was the veterinary aspect.  I love dogs and I want to help them, and I somehow imagined that this project was all about the dogs.

But then we got in the truck, and we drove into Goa, and we began to walk through a few neighborhoods, and people would shout hello to us from their porches. School children would smile and wave. People come bounding out of their homes to offer us tea, and the dog owners hugged us and thanked us and say, “God bless you”, and I suddenly realized that this project is not just about dogs.  It’s equally about the people. I quickly found myself wanting to help these folks as much as I wanted to help the dogs. This desire to help both people and animals was the same motivation that drove me to become a veterinarian in the first place and, after having retired from clinical practice for a year and a half, it was wonderful to get back in touch with those feelings. These people are so kind, and you want to be able to return that kindness, and Mission Rabies is the perfect way to do it.

Check out the construction workers below.  They spotted our bright yellow Mission Rabies shirts, and they stopped what they were doing so they could call down to us and say hi, and thank us for what we were doing.

Here’s another Mission Rabies admirer, insisting on getting a selfie with Alyssa.

Here are some more wonderful residents of Goa.

This elderly woman was so sweet.  She instantly adored Alyssa and just had to go over and hold her face in her hands.  It’s such a warm moment, and I’m glad I captured it on my cellphone.

I made sure to get a photo with her as well.

This guy below was really great.  I thought he had a small farm. He doesn’t.  It’s just his home, however, it is populated with almost every species you can think of.  The guy is just an animal lover, and he somehow accumulates animals that need a place to live.  He had dogs, cats, chickens, goats, a pig, and a cow. All pets.

I’ve always loved goats, and I really enjoyed playing with his little goat.

Motorcycle is a common mode of transportation here, and it’s not unusual to see an entire family of four on one bike.

This family heard that we were in the area vaccinating dogs, so they brought their dog to us on…what else?

I really enjoyed seeing people drag their pets over to the area where they knew we were going door to door.

Going door to door was very illuminating.  You get to see how the residents of Goa truly live, and you get a very good sense of just how much they love their dogs.

One thing I liked about going door to door was seeing the different outfits the women were wearing.  Indian women like colorful clothes, and some of the attire was stunning. Check it out!

This woman was amazing.  We were in a very impoverished area, the homes being nothing but small shacks made of corrugated tin.  We arrived in the area and announced our presence, and out came this woman, dressed in this absolutely stunning outfit.  I asked if I could take her picture, and she fidgeted and fussed a bit, making sure that she looked just right before she let me photograph her.

And then there were the kids.

For Indian people, family is everything.  When we went vaccinating door to door, children were present at most of the homes.  Indian children are beautiful and well-mannered.  They also find our work fascinating.  They watch in awe as you catch, vaccinate, and paint the dogs. It’s like having your own personal fan club.  It was very common, after visiting a home and vaccinating their dogs, to have the kids follow us as we continued on our route.  They loved being around us, and vice versa.

I carried a large stack of Mission Rabies wristbands with me in my bag, and wore three or four of them on my wrist.  After vaccinating their dogs, before we left, I would remove one of my wristbands and give it to the kid.  You can’t imagine how much this brightens their day.  I’ve seen kids run off with their wristband, literally leaping with joy. They’re made of rubber, but to these kids, it may as well be gold. They LOVE these wristbands!  I love looking at the photos of the children I met on this trip, and in many of the photos, you can see the Mission Rabies wristband sitting proudly on their wrist.  I think we probably interacted with more children than the other teams, because my teammate Alyssa is a mom, and she had a young son at home that she clearly missed, and she made up for that by stopping to chat with practically every child in Goa.

Check out these adorable Indian children.

You wanna make friends for life?  Give a kid a Mission Rabies wrist band.  Check out the tough guys below. That’s Lynel, with four Indian boys, all showing off their wristbands.

This is classic Alyssa, chatting with a little boy and putting a MR wrist band on him. The kid is clearly delighted.

This is pretty funny:  I gave this kid a wrist band, and I started to take some photos of him putting it on. When I looked at the pictures, I noticed that his dog had photobombed the second picture.

Most of the dogs we encountered in Goa were mixed breed, but we occasionally saw a purebred.  This kid is very proud of his (cockeyed) pug, and his Mission Rabies wrist band.

Another classic Alyssa moment.  We passed by a schoolhouse, and Alyssa ran into a couple of kids, and well… you know the rest.  Out came the bracelets, and whammo! Instant audience.

I will admit, these school kids were pretty cool.  So smart, and so polite.

Often, after taking a kid’s photo, Alyssa would show the kid the photo, which never failed to delight.

These Mission Rabies projects are hard work, so after a week of chasing down dogs in the stifling heat, we all took a break and went off on a weekend meditation retreat.  You’ll read all about it in my next post.