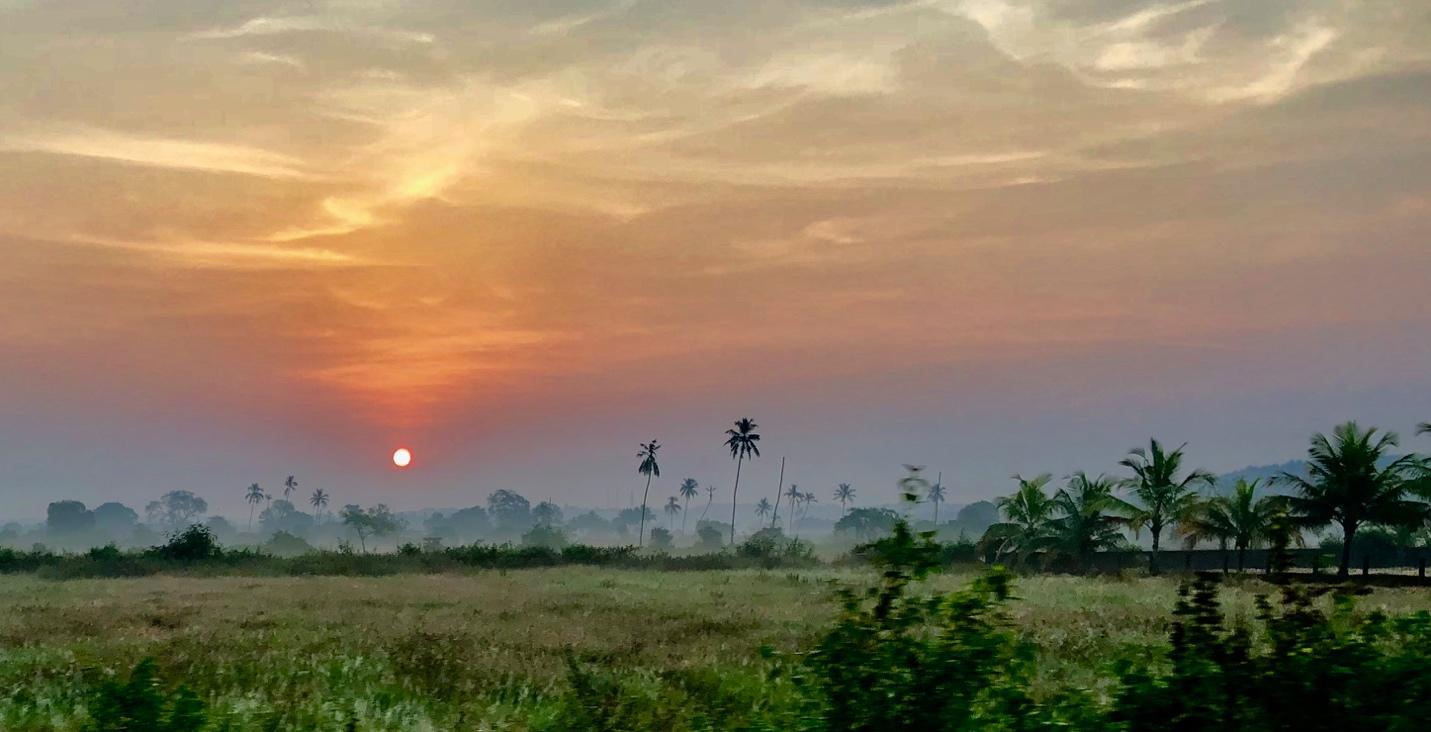 The two weeks of this vaccination drive were amazing.  Goa had me totally mesmerized. Rather than blog about the trip chronologically, I’m going to highlight some of the most memorable aspects of the entire mission.  I thought I’d start with the scenery and natural beauty.

Goa is a state on the western coast of India. The Portuguese first landed there in the early 16th century and soon conquered it.  The Portuguese ruled Goa for more than four and a half centuries. After India gained independence from Great Britain in 1947, India asked Portugal to give those territories to India, but Portugal refused. The Indian army invaded in 1961 and annexed Goa, making it officially part of India.

Goa is a head-spinning study in contrasts.  You’ll marvel at its stunning beauty, yet be repelled by the grime and ugliness.  One moment it’s blissfully serene; a few minutes later it’s painfully noisy.  You’ll breathe in the sweet aroma of incense as you walk past a temple; a dozen steps later, you’re repelled by the stench of something decomposing nearby. You’ll drive for miles past green rice fields, and moments later you’re in heavy traffic, edging precariously along the shoulder of the road to make room for a bus lumbering toward you in the opposite direction.  Goa is anything you can imagine: it’s rural, suburban, and urban; it’s empty and crowded; it’s peaceful and chaotic and fascinating.

Goa is a beach resort town, and of course, the beach scenes were beautiful. In North Goa, the main beaches, from North to South, are Anjuna, Baga, Calangute, and Candolim.  Although they blend from one to the other, each one has its own look and feel.  Although we didn’t do it often, I enjoyed the days where we pursued dogs on the beach.  It’s strenuous work, to run through sand while wearing a backpack. It’s nice being by the beach, though. The sound of the ocean, the sunlight glinting off the water, and music emanating from the beach shacks adds a nice dimension to the day, allowing you to occasionally forget just what hard work this is.  Of the four beaches we encountered, I enjoyed Anjuna the most.  Anjuna is a former hippie enclave, and there’s still a few vestiges of that – bookstore cafes, artsy lounges, vegan restaurants – that give the place a laid-back vibe.

The rural scenes were also lovely.  We visited a few farms, and the fields surrounding them were beautiful and serene.

Walking through the streets and alleys, we saw a lot of natural beauty.  Lots of lush foliage, and an occasional stream.

I found a lot of the plants to be pretty interesting.  I loved this fuchsia colored ornamental plant, which was present in some of the yards and gardens.

All throughout the trip, I kept spotting this plant, or a variation of it.  I’m not sure if the leaves start out completely green and then acquire more and more yellow spots over time, or if they start out with the yellow spots.  Some leaves had just a few yellow speckles. On others, the spots began to coalesce so that most of the leaf was yellow. Regardless, I thought it was beautiful.

Our days started very early.  One advantage of the early start is that we got to see some beautiful sunrises.

Our days usually ended around 6:00 or 6:30 pm, and that often allowed us to see some gorgeous sunsets as well.   The sunrises were nice, but the sunset were completely stunning.

The picture below is my favorite.  The shades of orange, grey and green all blending seamlessly was really a sight to behold.

I would visit Goa just for the scenery alone!  But there was much more to this trip than just the beautiful scenery.  In my next post, I’ll tell you about the kindhearted people and the delightful children of Goa.