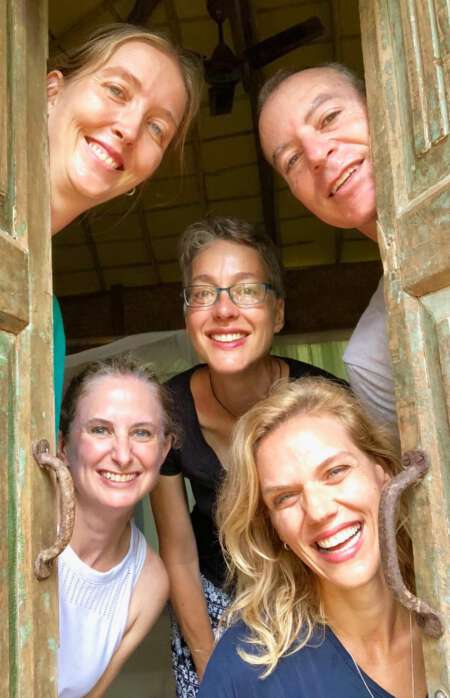 The Mission Rabies vaccination drive is exhilarating, but it’s physically taxing work.  You wake up early and spend nearly the entire day chasing down dogs, in stifling heat and humidity.  Fortunately, the Mission Rabies folks provided us with the opportunity to recharge our batteries after the first week, by arranging a relaxing, meditation retreat for the volunteers.

On Saturday morning, we all met early at the reception area, and two cars drove us to the retreat a few hours away.

The drive was kinda fun, as we all chatted and shared stories from our first week.

The hotel is hidden away in the jungles of south Goa.

Again, being a city boy, hiking through the jungle isn’t an everyday occurrence for me, so this was new and exciting.

After trudging up a steep path, we finally reached the hotel and reception area.

The main building was lovely. There was a big table to sit and eat, and lots of other seating areas. A nice, airy canopy overhead provided lots of light.

I really liked this sign that they had posted in the reception area.  Deep in the Goan jungle, there was no WiFi. Some folks might find that inconvenient, but the point of the retreat was to get away from it all and relax, and I liked the idea of being unable to access the internet.

It was all about calmness and relaxation.  “The art of being” was the motto here.

The grounds were beautiful. Scattered over several acres are small huts and treehouses, surrounded by tropical forest.

We were allotted two 5-person complexes and one 2-person hut for the 12 of us.

I shared number 18 with Alyssa, Dawn, Claudia, and Jo.

The main room of our little complex had a queen bed, draped with mosquito netting. Claudia and Jo shared that one.

On the left was a small room off of the main room, containing a twin bed, also draped with netting.  That was my room.

The advantage of being the only unpaired guy in the group: my own room and bed!

On the right was a doorway that led to an outside room with a small sink, a closed off area with an outdoor shower.

I wasn’t used to using an outdoor bathroom, but no big deal.

Until I saw the toilet.

This toilet wasn’t a regular toilet.  It was an outdoor toilet – a hole in the ground that you squat over.  There were even little indentations indicating where you should place your feet when you squat. You flush the so-called toilet by pouring water from a nearby bucket down the hole when you’re finished.  I sorta like getting out of my comfort zone, but maybe this was a little too out of my zone.  Anyway…

Outside, before you enter the main room, were stairs that led to a treehouse three stories above the ground.  This was the most unique room, and was where Dawn and Alyssa slept.

Once we got situated, I got some really nice photos of the group.

Claudia, Dawn, Jo, and Alyssa on the treehouse steps.

Initially, I was thinking of staying at the Mission Rabies hotel that weekend and check out the beach and souvenir shops. But Goa is a large state, and the vaccine drive only covered northern Goa. I wanted to see what the other areas of Goa were like.  In south Goa, the beach town of Palolem is very popular, and we were there just before tourist season officially began.  So, Saturday afternoon, after breakfast at the hotel, we split into groups and took taxis into Palolem.

The breakfast at the hotel was great.  Oatmeal, fresh fruit, and idli, but not the white idli that we had at our Mission Rabies hotel. These idli used Goan rice, which gave it a reddish color.

I also liked that a cat was sleeping on the table during breakfast.

The restaurants and cafés in Palolem had that hippie, nutty-crunchy vibe, too.

The beauty of the beach was striking.  Unlike the beaches of North Goa, which are crowded and a little rough around the edges, the beach at Palolem is pristine and peaceful and gorgeous.

In some places, the person-to-bovine ratio was almost 1:1

As we strolled the length of the beach, we came upon a really nice restaurant and we all decided to stop and have lunch there.

We continued to walk the length of the beach, soaking up the natural beauty.  I liked the muted colors of the water and sand, and it was nice being among the local vacationers.

There were dogs roaming and sleeping on the beach, and they were friendly and adorable and we stopped frequently to pat them.

This dog was so sweet and friendly. She dug a hole in the sand, because the sand below the surface is cooler.  I would have loved to take her back home. Sigh.

Although cows are a common sight, I still got a kick out of seeing cows and dogs hanging out together.

People sometimes make fun of me and my ridiculous selfie stick, but hey, that stick allowed me to get great pics of me and my posse on the beach.

While strolling along the beach, I spotted something colorful in the sand.  It looked like some kind of Japanese toy.

I turned it over, though, and it had legs!

After the beach, we went back to the main drag and did some souvenir shopping.

I passed by a spice shop and got some spices to bring home for Mark.

We then grabbed a cab back to the retreat, where we made our way to our huts.

I’m a seasoned traveler and have stayed in many hotels over the years, but none have been in the middle of a literal jungle.  I’ve only gone camping in the woods once, and that was about 40 years ago, and certainly not at a meditation retreat. After dinner, I got into my small bed draped in white mosquito netting, and went to sleep.  I’m a poor sleeper, and I woke several times during the evening.  The lighting around our hut caused my room to be flooded with a pale, peaceful glow. The jungle was completely silent.  This was a meditation retreat, so I went with the flow and I meditated/contemplated, in the jungles of Goa. As I lay there, thousands of miles from home, in the woods, under the stars, in a magical country like India, a wave of peaceful contentment washed over me. It’s hard to put into words, but I really felt like I knew my exact place in the world.  The sign at the reception area saying that in the jungle you’ll find a better connection was right on the money.

The next day, some of my fellow volunteers went back into town for more shopping, but I declined.

This jungle retreat was really beautiful and serene, and I remained in meditation mode the rest of the weekend.

I found a quiet spot in our little housing area and meditated for 20 minutes, and then I walked one of the trails on the grounds, enjoying the quiet, and communing with nature.

I spotted this very cute cat on the trail.

I love cats, and it was nice to be able to spend a little time with one, after spending that first week working with dogs exclusively.

My nature walk was pretty nice.

There were a lot of interesting butterflies flitting about on the trail.

I even spotted a slug on a tree trunk.

The coolest, though, were the monkeys hopping around up in the trees.  They were pretty fast and not easy to photograph, but I managed to snag a photo of one.

The retreat was exactly what we all needed to before the start of the second half of the mission.