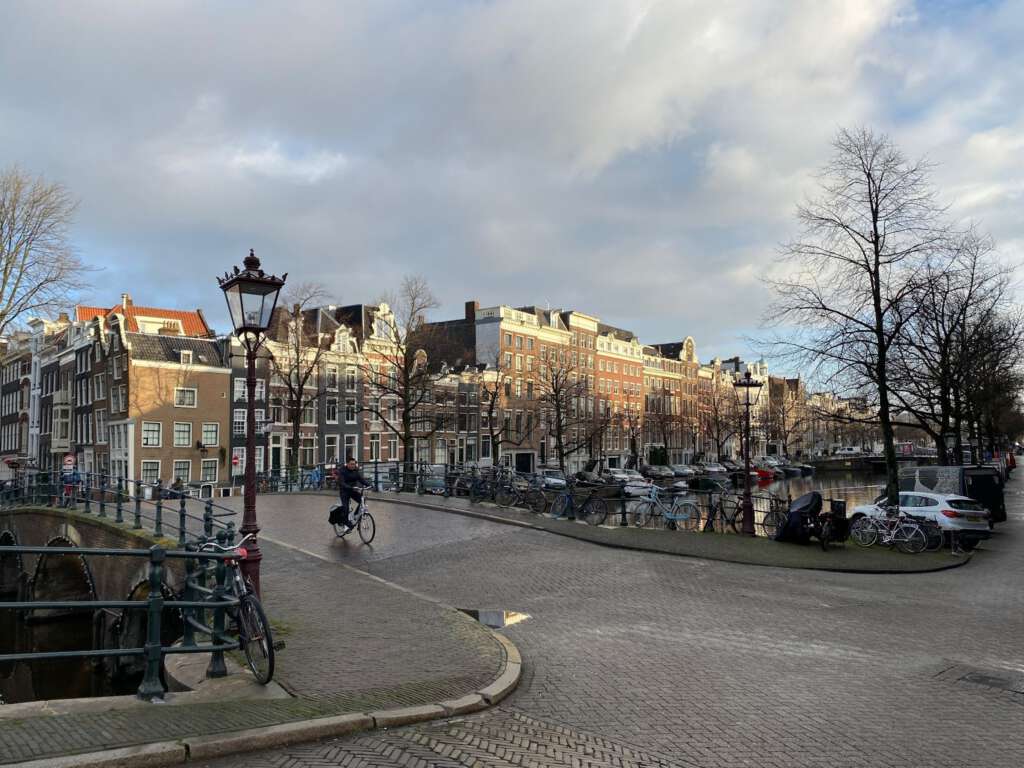 Amsterdam is my favorite city.  When I sold my veterinary practice and retired four years ago, I bought an apartment there, so I would have a place of my own to stay during my frequent visits.

I had an especially great time there in August of 2019, first with my friend Robb who visited the first week of August during Amsterdam Pride, and then with three of my college buddies a week later.

A few months later, in January 2020, I visited again, to take my third Dutch language class.

Then the pandemic hit, and that put the kibosh on everybody’s travel plans.  I haven’t been to The Netherlands in a year and a half.

Happily, that dry spell is about to end.  In about ten days, I’ll be off to Amsterdam.  I’m staying for an entire month, and I’m desperately looking forward to it.  But I’m getting a little dismayed, as I keep reading about a major resurgence of Covid in The Netherlands.  Hospitalizations are up 51% in just a week, and Amsterdam is starting to institute a few new restrictions.  Bars and restaurants must close at midnight.  Public gatherings are being curtailed again.  Amsterdam Pride, which traditionally takes place during that first week of August, has essentially been canceled.  Museums are restricting crowd size, and visits to museums must be planned in advance.

I’ve been keeping up with the Dutch news by reading The Netherland Times online, at www.nltimes.nl.  For a while, Amsterdam had a 9:00 p.m. curfew, where everything closed down, and you were prohibited from even being on the street after 9:00 p.m.  I check the news daily, hoping that they don’t reinstitute this.  I envisioned the city waking up and coming alive, in similar fashion to New York, after months of pandemic restrictions, but barely 50% of Amsterdam residents are vaccinated, compared to about 73% of New Yorkers, and it looks like the Dutch are paying the price for that.

For me, this trip is mostly going to be about furthering my photography, and immersing myself in Dutch culture once again.  I’ve been enthusiastically pursuing my photography in the past few months.  First, I bought a Ricoh GRIII camera to take my photography to the next level.

However, I found myself using it less often than I imagined, for two reasons.  The first: the Ricoh has a fixed lens, with a somewhat wide focal length of 28 mm.  I’ve read many articles and watched several videos that claim that you do eventually get used to this wide angle, and that ultimately it makes you a better photographer because you learn to compose photos with a lot of subject matter in the frame.  If you want to zoom, say these articles and videos, you zoom “with your feet” i.e., you physically move in closer. Frankly, I just couldn’t get used to 28mm.  It just feels too far away. I admit that I probably haven’t given it enough time, and I do plan on giving it another shot at some point in the future.  The bigger reason why I don’t use it much, however, is that I can’t be as stealthy with the Ricoh as I can be with my iPhone, despite the Ricoh being pretty tiny. I’ve really mastered the stealth factor with the iPhone.

I then bought a Fuji X-T30, perhaps a little impulsively, because I had been reading that if you really want to progress to the next level, you need a camera that allows you to change lenses.

Photographers rave about Fuji cameras, mainly the realism of the colors.

The camera also has several built-in color simulation options that result in beautiful photos coming right out of the camera, with minimal need for editing.  (Another reason why people like Fuji cameras is that they are beautiful in appearance. It’s a superficial reason, but it’s hard to argue with it. They are lovely to look at.) Street photography is my favorite style of photography, and although the Fuji X-T30 is frequently cited as being great for taking street photos due to its small size, to me this camera is huge, especially compared to the iPhone and the Ricoh.

Don’t be fooled by the photo above, comparing the Fuji and Ricoh; keep in mind that the Fuji pic is the camera without the lens, while the Ricoh is shown with the fixed lens fully extended. Here’s what it looks like with the 18 – 55mm lens attached:

I initially thought the Ricoh might end up being my go-to camera for street photography, given its portability, but I had no illusions that the Fuji would be the camera that I bring everywhere.  I didn’t buy it for street photography.  I bought the Fuji because it’s a real camera, and if I ever want to really be proficient in photography, I have to move beyond letting my iPhone mindlessly determine the aperture, shutter speed, and ISO for me.

Well, I’ve had this Fuji camera probably for a year now, and I can still count on two hands the number of times I’ve used it.  I’ve gone through the user’s manual, watched many videos, and read several articles about this camera, and then promptly forgot it all.  So, I’ve made the decision that when I’m in Amsterdam next month, I will use the Fuji exclusively.  My goal is to master the controls on this camera, becoming super-comfortable using it.  I suspect that I will take a few “street” photos while I’m there, but as I said, the size and bulkiness of the lens makes it less than ideal for that.  Most of the photos will be regular travel photos – scenery, architecture, etc. – although I hope to be somewhat creative if possible.

Although their lenses tend to be pretty large, Fuji did come out with a lens recently that has a lot of people talking.  It’s a 27mm lens, which translates to about 41mm on a full-frame camera.  Some people think 35mm is the perfect focal length for street photography, while others swear that 50mm is more ideal.  This lens, at 41 mm, seems the perfect compromise.  I find that with my iPhone, half the time my photos are taken with the phone’s 1x lens, and half with the 2x.  The 1x lens is equal to 26mm, and the 2x is 52 mm.  To have a lens with a fixed focal length somewhere between those two options, like this Fuji lens, seems perfect for me.  What makes this lens truly ideal for street photography, however, is the physical size of the lens.  It’s a “pancake” lens; it’s small and flat.  It’s probably the smallest lens that Fuji makes.

What people are really raving about, though, is the presence of an aperture ring on the lens.  The previous incarnation did not have the ring, so you had to set the aperture using the internal menu, which was a little inconvenient.  This lens has the aperture settings right on the lens, for easy selection.  Plus… the lens is weather resistant. It’s a major improvement.  I went to B&H Photo to see it for myself, but I was told that it’s sold out and is on backorder.  I went to Adorama and was told the same thing.  I looked online. It’s on backorder everywhere, with no estimated arrival date.  The company can’t make them fast enough to meet demand.  I went ahead and ordered one from B&H, hoping that they would receive it before I leave for Amsterdam, but I suspect that won’t happen.  I even looked on Dutch websites to see if they had it in some camera shops in Amsterdam, but it’s sold out there as well.  I don’t need this lens to use my Fuji, but it would be easier and more convenient to have a small, light lens on the camera while I bike around Amsterdam, instead of the clunky 18 – 55mm lens, but if I have to tool around with this big lens, so be it.

As for getting back into Dutch culture, I hope to do that by practicing my Dutch, and by returning to my favorite museums.  I’ve gone through all 36 of my Dutch lessons again in the past few weeks, and have been watching Dutch videos with Dutch subtitles.  As for museums, knowing that I would be returning to Amsterdam in August, I renewed my MuseumCard.

For 65 euros, I get free admission to dozens of museums in the city (and entire country).  I went online and reserved entry tickets for the Rijksmuseum, Stedelijk Museum, van Gogh Museum, Rembrandt House, Old Church, New Church, Jewish Museum, Anne Frank House, FOAM (a photography museum), House Marseille (another photography museum), and Allard Pierson Museum.  A different museum every two or three days.  I picked 11:00 a.m. as my entry time, giving me the rest of the afternoon to take photos.

If you follow me on Facebook, you’ve surely seen photos from my One-a-Day Project.  This is a little project I designed for myself in 2021, in which I post a reasonably interesting photo that I’ve taken on that specific day.  If I take ten great photos, I pick the one I deem most worthy, and I post it.  If I don’t go out on a particular day, I’m not allowed to pick an unused one from a previous day. The posted photo must be taken that day. It was meant to inspire me to go out and shoot every day, whether I was in the mood or not.  If I don’t go out for whatever reason (laziness, bad weather), I’ll at least take a photo indoors, usually of my cat Glitter. So far, about 97% of the photos I’ve posted were taken with the iPhone, 2% with the Ricoh, and maybe 1% with the Fuji.  Well, in August, nearly all of the photos for the One-a-Day Project will be from the Fuji. This will be a nice change, and I hope my Facebook friends who’ve been following the project and making comments notice the change.