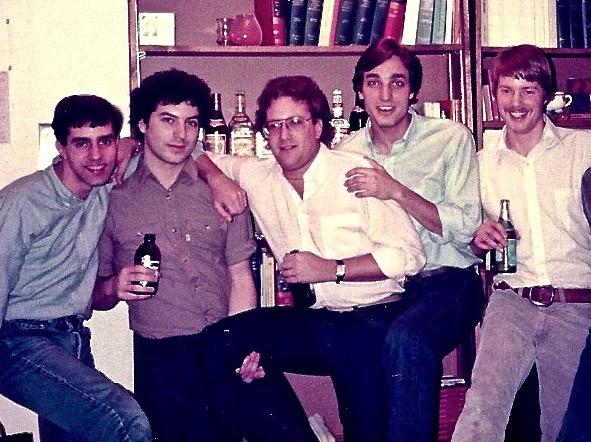 Men Of The Woods in Amsterdam Pt.1 – Celebrating 41 Years of Friendship

In early 1978, as I was finishing up my freshman year of college at New York University (NYU), I realized that this wasn’t the collegiate experience that I was expecting or hoping for.  I was still living at home, riding the subway into the city for my classes, and then coming back home to Brooklyn to try to study. This didn’t feel like college. It felt like a job. My parents, always intensely supportive of my academic endeavors, were walking on eggshells, afraid to make noise for fear of disturbing my studies.  Something had to give. I decided that I would transfer to a different school, to live on an actual campus, in an actual dorm room, and maybe experience college the way I had always imagined it to be.

This was a big decision for me.  I graduated high school in 1977, however, most of my high school friends were a year behind me, and they all still lived in Brooklyn.  I didn’t see them daily like I used to, but on the weekends we continued to hang out, smoke weed, drink beer, and go to concerts and bars.  Typical teenage stuff. Except for my friend Neil, I hadn’t made any new friends at NYU. Perhaps if I lived in one of the NYU dorms, I would have. In May, my high school friends would be graduating and presumably going off to college as well.  My pool of friends would dwindle. It was time for a change.

A few acquaintances from high school had gotten into some of the State University of New York (SUNY) schools, and I heard that they were all very happy there.  Brockport, Stonybrook, Oneonta, and Binghamton were the most talked about. New Paltz was another popular one, but it had a sordid reputation as a party school, and I was ready to curtail some of the partying and start focusing on my future career in veterinary medicine. I crossed New Paltz off my list. I applied and was accepted to a few of the other SUNY schools (I can’t remember exactly which ones), and I elected to attend SUNY Binghamton.  It turned out to be one of the best decisions of my life.

At Binghamton, there were several dormitory complexes.  Ours was on a hill, and had the quaint, pastoral name of “College in The Woods”, often shortened to just “The Woods”.  There were four dormitories in the complex: Cayuga Hall, Seneca Hall, Onondaga Hall, and Oneida Hall, each named for one of the Finger Lakes.  I lived in Cayuga, at the bottom of the hill.

During my first semester, I was randomly assigned a roommate.  This turned out to be Jimmy Sanders, from Long Island. On the same floor, in the room next door, were Mike Plumeau, from Carmel, and Chaz Schatzle, from Wappinger’s Falls.  On the ground floor of Cayuga Hall were suites that housed four students instead of two. In one of those suites lived Barry Phillips, also from Long Island. Barry, Chaz, Mike, and Jimmy formed the initial core of my group of friends.

The dorms were co-ed.  Along the hallways were rooms that were shared by two roommates.  In the corners of the hallways were suites. These suites housed six students, in three bedrooms.  All of the bedrooms opened onto a central lounge area. The lounge area was great for parties, and each suite had its own bathroom.  We got word that two of the three bedrooms in a suite in Oneida Hall were available. I had become close friends with Barry, and he and I agreed to share one of those rooms.  Chaz and Mike agreed to share the other. Jimmy became good friends with Mike Cuda, and they roomed together, but sadly, not in the suite, as the third room was already occupied by two guys (Abe, who was cool, and Loren, who was not.)  After three semesters in that suite, we said goodbye to campus housing and elected to move into a house off campus. Barry had graduated by then. We needed a fourth housemate, and we invited another Mike (Rosen) to come live with us. And thus you have the “Men-of-the-Woods”:  Barry (a.k.a. “Dweezle” or “The Dweez”), Jimmy (no nickname), Chaz (a.k.a. “The Gland”), and me (“Snaldo”), plus the three Mikes, all addressed by their last names – “Plumeau”, “Cuda”, and “Rosen” – to avoid confusion.

“True friends are like diamonds: bright, beautiful, valuable, and always in style.”  I don’t remember where I read that, or who said it, but it sums up perfectly my feelings on friends and friendship.  I had a great group of friends in high school, some of whom I am still in touch with. My veterinary school class was very close, and I retain enduring friendships with many classmates. In fact, I created and am the administrator of our veterinary class Facebook page.  But it was during those Binghamton years where I made the most meaningful friendships in my life. To describe all of the insanity, hilarity, and camaraderie that occurred during those years would take forever and could easily fill a book (or another hundred blog posts), but it bonded us like brothers.

After we all graduated, we each pursued our own lives and dreams.  We stayed in touch with each other, but it wasn’t as easy back then as it is today.  There was no e-mail, no cell phones, no Facebook, no Skype. In those primitive days, there were snail mail and telephone calls, and that’s it.  We all knew where we each were geographically (although that changed frequently for some of us), and knew most of the major details of each other’s lives, but technology precluded us being closely tied to each other.

As the years went on and technology exploded, we were able to communicate more easily, and through perseverance and fortunate scheduling, in 2014, six of us were able to get together in New York City for a reunion.

Needless to say, we had a great time.   We even got to recreate the famour “hair picture” 35 years later.  Much less hair for all of us.

After dinner, we went to the rooftop of Jimmy’s Manhattan apartment on Lewis Street (his “man cave”, as he calls it), and with the Williamsburg bridge dramatically lit up behind us, we each in turn gave a 15 or 20 minute synopsis of what we were doing and where our lives had led us over the past 20 years.

Barry gave a riveting account of how he tracked down his father, decades after he walked out on his family.  It was an incredible detective story. (I will have to convince him to author a guest post all about it, on this blog, in the future.) It finally became my turn.  Although quite a bit had happened to each of us since our last gathering, my life had certainly undergone a fundamental change. I had come to terms with my sexuality several years before, and was living as an out, proud, happy gay man.  I had also been partnered with Mark for 14 years, and he was naturally a major part of my life. With all of us being so close, it felt inherently wrong to not be able to share this aspect of my life. And yet, no matter how progressive society has evolved and no matter how well you think you know your friends, every gay man has experienced some expression of homophobia, and there’s always that fear that you might not be accepted.

Of course, these fears were completely unfounded.  No one blinked. No one cared. Later on, in fact, Mike Cuda quietly mentioned to me that he had a brother who died of AIDS several years before.  The fear that I had about my buddies accepting me was my own internalized homophobia, an issue that every gay man has to face and conquer. These guys certainly made that easy.

The next day, we all met for brunch, and it was decided that this reunion has to become a regular event.  Although we had spent many years apart, during those three years in Binghamton, we were like trees that grow side by side.  Our roots got tangled, and it looks like they always will be.

We’ve gotten together a few times since that first meet-up in New York.  In 2016, we rented a house in Woodstock, New York, and amazingly, all seven of us were able to attend.

The following year, five of us convened at Mike Cuda’s vacation home in the Thousand Islands, on the border of New York and Canada.

Last year, we were all prepared to reunite in Santa Fe at Chaz’s house, but an infuriating last minute flight cancellation put the kibosh on those plans.  Meanwhile, I had purchased an apartment in Amsterdam, and was in the process of furnishing it and making it hospitable for future guests. We decided that yes, in 2019, it would be a European reunion.  Sadly, Jimmy and Cuda would be unable to attend, but the other four were onboard. And then, the day before departure, Barry sent me a message that a sudden medical emergency involving his wife would be causing him to cancel.  Barry and I are close, and his not being able to come was a real blow. But a family emergency comes first, obviously. Meanwhile, I await the arrival of Plumeau, Rosen, and Chaz, for an Amsterdam adventure.