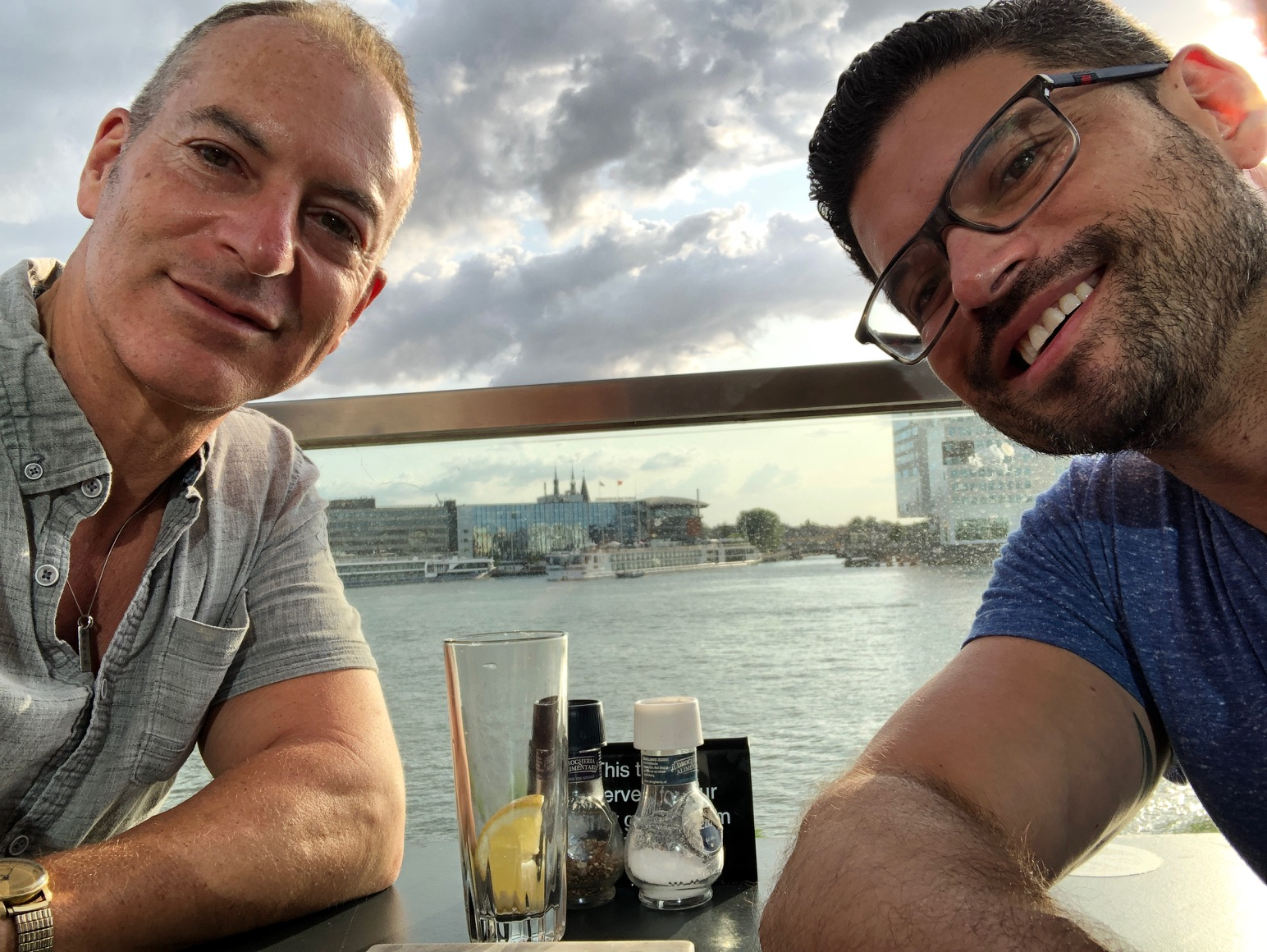 After spending a week in Amsterdam by myself, I prepared the apartment for Robb’s visit.  The Anne Frank Room (i.e. the hidden little upstairs bedroom) was clean, and the bed was freshly made.  I put a small fan up there, because being on the top floor, it can get a bit warm. I set my alarm for 6:00 a.m. Tuesday morning, allowing me enough time to get to the airport to pick him up.

His flight was on time, and I met him at the gate.  We grabbed a train to Central Station, and 18 minutes later, we emerged from the station and headed to the apartment.  Fifteen minutes after that, he was in the apartment, unpacking. Robb is a nurse, and he’s used to long stretches with little sleep, which he handles remarkably well.  I thought he’d need a major nap and some time to recover, but after just about an hour’s rest, he was raring to go. We hit the street, and I conducted a brief walking tour.

My apartment is two minutes from Dam Square, so we hit that first.

The square had the usual mix of tourists and cheesy performers.  I showed him the Royal Palace and the New Church (which, at 600 years old, is still newer than the Old Church, which is 700 years old.)

Robb exchanged some dollars for euros at Pott Exchange (they have the best rates, plus, I love that name), and then we admired the Monument of the Dam before strolling down popular Warmoesstraat.  That street used to be a very wild, raunchy street, but it’s become tamer and more touristy over the last decade or so. We had to stop at the ever popular Condomerie for the usual tourist photo. The end of Warmoesstraat leads right into another cool street, Zeedijk. Right near the junction of those streets is a cafe with outside tables that overlooks some canal houses, and the view is really lovely, very reminiscent of Venice.  As you walk up Zeedijk past those homes, there’s a little gap, allowing you to view that cafe from the viewpoint of the canal homes.

Although Amsterdam doesn’t have a real Chinatown per se, Zeedijk is the closest approximation, with a variety of Asian restaurants, grocery stores, and a temple on that street. When the street ends, you find yourself at Newmarket, a nice square surrounded by all sorts of cafes. The centerpiece of that square is De Waag, the old weigh station, where goods plundered by the Dutch East India Company were weighed after the ships returned from their journeys.  De Waag is now a really nice restaurant.

At the southern end of Newmarket is a street that I like.  I forget the name of it. The street has some cute shops and cafes, including of my favorite cafes, Betty Blue.

We stopped there to rest and grab some lunch. From there, I took Robb to the edge of the Amstel River, where you can watch the tourist boats cruise by, and you have a wonderful view of canal houses on the water.

Our loop of the north-east part of the centrum continued, over the bridge where romantic couples like to add their “love lock” – a little metal lock with both person’s name, and usually the date – to the current collection.  Last February, I attached a lock with me and Mark’s name on it, in honor of our 18th anniversary. I didn’t realize at the time that it would be removed by the city a few days later.

Anyway, we continued on, past the bizarrely popular rubber duck store (yes, they sell only rubber ducks), and eventually back to the apartment, where we took it easy before venturing out again.

As most people know, Amsterdam “tolerates” the use of some recreational drugs.  “Coffeeshops” that sell pot and hashish (smokeables and edibles) are scattered throughout the city.  Psychedelic mushrooms are also legally available here. Back in the planning stages of this trip, I mentioned this to Robb, and we both agreed that it might be fun to give them a try.   I mentioned this to my friend Brad, who is an expert on these matters. Brad was staying in my Amsterdam apartment when I spoke to him about this, and he agreed to ask around to find out which ones were the best.  A little while later, he had his answer, and he offered to get them for me and leave them in the apartment. When I arrived, I found these waiting for me.

Robb and I decided to give them a try that evening.  Both of us were big fans of the television comedy Broad City, and I think we were both hoping for the same kind of experience that Abby and Ilana had when they took mushrooms together (a truly hilarious episode).  Alas, it came nowhere close, but it was still a lot of fun. Around 6 p.m., we ate a little snack inside the apartment. Then we split one packet of mushrooms between us. Brad heard that these were pretty strong and that an entire packet per person might be too much.  They tasted awful, like old, rotten oatmeal. We then started strolling around. The plan was to stroll through the very pretty Jordaan neighborhood, eventually making our way to the five-minute ferry that takes you across the IJ river, just north of Central Station. The EYE is an art-house museum and cinema with a great restaurant that had an outdoor terrace overlooking the water.

We strolled past a favorite site of mine, the Homomonument, which commemorates all people oppressed or persecuted for their homosexuality and then past the Anne Frank House, into the Jordaan.  The streets are really pretty and quiet, and the small canals are very picturesque. After an hour of strolling, we both agreed that the mushrooms were having no effect. I don’t know if we just didn’t do enough of them, or if eating beforehand was dampening the effect of them.  So we split the second, disgusting packet. We then moseyed in the direction of the ferry. Both of us started feeling a bit queasy, and Robb started to worry a bit about it, as he sometimes experiences sea sickness. I told him that this was literally a five minute ferry ride. He didn’t get sick, but those shrooms were not sitting very well.  The ferry ride was short but fun.

The EYE museum is a very cool looking building.

We got lucky, scoring a great waterside table. Robb ordered the steak, and I ordered the ravioli.  As we waited for the food to arrive, my mushrooms finally started kicking in. It was mild, though. No amazing visuals.  But things definitely looked nicely enhanced. And everything we said and did seemed hilarious to me. Robb insisted that he wasn’t experiencing any effects, but he was sure laughing a lot. Both of us were definitely still feeling very queasy, just as our food arrived.  We didn’t know if eating would settle our stomachs, or if it would be disastrous, but we weren’t about to take a pass on this great looking food, so we ate, smiling and giggling all the while.

Fortunately we succeeded, and after more meal mirth, we meandered back to the ferry.  During the ferry ride and the walk back to the apartment, the effects of the mushrooms intensified, and it was a fun walk. As usual, Robb claimed to be minimally affected. You never know with him. We finally reached the apartment, trudged up the four flights, and called it a night.