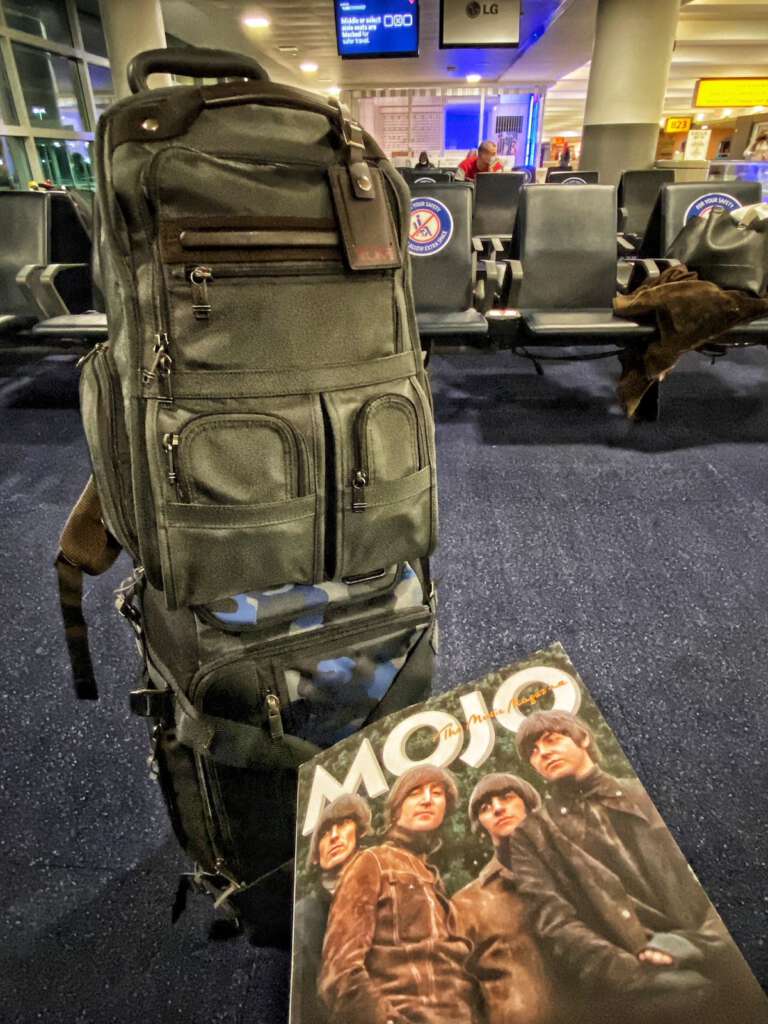 Mike arrived in New York last night.  His plane landed at Newark, and he took the train to Penn Station, and then walked to my apartment.  He had a memorable flight, mainly because a passenger on his flight fainted in the aisle.  Oh, I should mention that the passenger was … him!  Apparently, a crappy night’s sleep, a very early wake-up (2:45 a.m.), and not enough water was enough to dehydrate him to the point of passing out.  A little rest and some juice on-board, and he was fine.  We had dinner at home; Mark made tacos.  Then we went to The Strand bookstore so Mike could peruse the comics and graphic novels before heading back in time for our weekly zoom call with the rest of our college buddy group. They wished us bon voyage.

This morning we had breakfast (omelets, made by me), and then we puttered around, checking our respective suitcases and backpacks to make sure we had everything we needed.  I’m a pretty obsessive planner, and I was reasonably confident that we were ready for the journey.  The only thing we both didn’t have with us was our all-important negative Covid test, an absolute requirement to fly in KLM.

Last week, my pre-colonoscopy Covid test results were reported 14 hours after the sample was taken, and the results were in my inbox when I woke up at 7 a.m.  Yesterday I took the test at approximately the same time of day, but there were no results in my inbox at 7:00 a.m.  No results at 8:00.  Or 9:00.  Or noon.  I sent a message to my doctor through my online patient portal asking if he could call the lab and find out what was going on.  He wrote back saying that the sample was at the lab and it was being run. Mike had taken his test two days ago and he, too, hadn’t gotten the results.  At noon, he left the apartment to meet up with a friend here in the city for about two hours.  At 2:30, Mike texted me that his test results had arrived, and they were negative.  Mine still hadn’t shown up.

Mike returned around 3:00.  I printed out his test results.  I kept busy on the computer, reading articles and trying not to panic.  And then, while browsing Facebook, I received a notification in the top right corner of the screen.  Yes! Whew!  At 3:12 pm, 33 minutes before the car service was due to pick us up, my negative Covid test hit the inbox.  I feel bad for one of the volunteers, Britt.  She sent a message in our WhatsApp thread saying that she was turned away in Minneapolis because her Covid test had expired by six hours!  The next flight to Arusha was 48 hours later.  What a nightmare!

At the airport.  My two crammed-full bags and my Mojo magazine on my lap.

One thing both Mike and I were worried about was the weight of our bags.  Neither of us were going to check any bags; it was going to be all carry-on.  The weight limit for checked bags is 23 kg.  For carry-on, it’s much less, and both of us exceeded it substantially.   My plan was to skip going to the ticket counter to check in, because they often weigh your bags there.  Instead, because we had downloaded our boarding passes, we went right to the security lanes.

The airport was very empty.  I haven’t flown for a year, and I really didn’t know what to expect.  It was really a pleasure being in an airport this empty.   Security didn’t go totally smoothly, though.  Both of us had our backpacks pulled aside for inspection.  And our suitcases.  In my suitcase, the big metal water bottle aroused some suspicion on their x-ray scanner.  In my backpack, they found and inspected a small cannister of alcohol wipes, determined that it wasn’t explosive, and let me through.  Mike had his insect spray confiscated, and his sunscreen.  I guess he better prepare to get burnt and bitten.

While waiting at our gate, Jane recognized us and came over to introduce herself.  Jane is another volunteer for this Mission Rabies project.  In our Mission Rabies WhatsApp group, Jane mentioned that she was leaving from JFK this evening.  I told her to look out for me and Mike, since we all have the same flight itinerary.  Jane is originally from the U.K.  She now lives in the U.S. splitting her time between New York and Florida.  I asked her where she lives in New York, and she said Bleecker Street.  I mentioned that when I moved back to New York in 1997, I lived at 77 Bleecker Street.  Believe it or not, that’s where she currently resides!  There are eleven volunteers on this trip, from the U.K. and the U.S.A, and two of them once lived in the same apartment building.  Bizarre.

I had no idea if our flight was going to be really full, or really empty.  Mark said that he thought it would be very full, because airlines can’t afford to run flight that are only half-full.  I didn’t think it would be very full, especially during this Covid resurgence, but he thought it would be, especially since the first leg of our journey is to Amsterdam, a very popular city.  It turns out that he was wrong.  The flight is very empty.  The seating arrangement on the flight is three seats on the left, three in the middle, and three on the right.  I’m in the middle section and I have all three seats to myself.  Mike is on the right, and he’s got the same situation.  I don’t think I’ll get tired on this flight, but if I do, I can lay across all three seats.  I’ll probably be pretty tired on the second leg of the trip.  Hopefully that flight will be similarly empty.  I suspect it will be.  Amsterdam is a lot more popular than Arusha, Tanzania, and if this flight is this empty, that flight should be even more so.

I don’t think there’s more than 60 or 70 people on this flight.  About two-thirds of them are orthodox Jews, for some reason.  Lots of black clothing, beards, and funky hairdos.  The flight crew doesn’t seem very strict.  I was allowed to keep this laptop open on my lap, typing away, while the flight was taking off.  KLM is a Dutch airline, so when the flight attendant came by with water and headphones, I spoke to her in Dutch.  I told her that I needed to practice my Dutch, so she said (in Dutch) that she will speak only in Dutch to me for the duration of the flight.

The in-flight entertainment is pretty crappy.  Just a handful of movies, nothing really interesting.  I guess I’ll just read my magazines and relax for the rest of the flight.  Next time I write, I’ll either be in Amsterdam or Tanzania.

There was no time to write while in Amsterdam, as our layover was pretty short.  The flight from Amsterdam to Kilimanjaro was a little more full than the first leg of the trip, but still relatively sparse.  I got my aisle seat, and was hoping no one would take the window seat, but someone did.  However, with the plane being so empty, I was able to move to another row, where I once again had all three seats to myself.  I didn’t get tired on the first leg of the trip, but I started to feel pretty wiped out about two hours into the flight.  I can’t sleep on a plane, but I was able to achieve a reasonably trance-like state for a few hours, stretched across the seats, and I wasn’t really tired when we arrived in Tanzania.   Half of the people on the flight did not get off the plane; their final destination was Dar Es Salaam, so they stayed on board for a brief layover before the plane took off again.

I’m a little jealous of Mike. He can sleep anywhere.  For example, even while in the airport, with a laptop on his lap, Mike can fall asleep.  Behind the mask, he looks like he’s working.  But he’s asleep.

At the airport, they checked everyone’s temperature before letting us continue on to passport control.  Most of the people were getting a visa on arrival.  Mike and I already had our visas, so we got through passport control faster.  I was a bit worried because our visa wasn’t set to start until the next day, but the passport agent either didn’t notice, or didn’t care.  As we exited the airport, we saw a currency exchange booth, and Mike and I each converted 20 U.S. dollars into about 88,000 Tanzanian shillings.   At the currency booth, we were joined by Courtnie, another volunteer.  None of us realized that she was on the same flight.  She said she thought she recognized us (Mike, Jane, and I had posted pictures of ourselves in the WhatsApp group), but she wasn’t sure, so she didn’t say anything.  Courtnie is a veterinary technician (or “nurse”, as they refer to themselves in Scotland.  Courtnie is from Glasgow, and her Scottish accent is pretty thick, but still understandable.

While we were gabbing at the money exchange booth, our driver appeared, wearing a Mission Rabies shirt.  He took us to the hotel, the Tanz Hands Guesthouse, where Amy and Helena were waiting for us.  We were soon joined by Susan, another volunteer, although she wasn’t actually part of the Mission Rabies project.  The Worldwide Veterinary Service is running a spay/neuter project here as well, and Susan is part of that project.  She’ll be spaying and neutering all day during the next two weeks.  We had a very nice dinner and did some chatting before retiring to our rooms.  My room is pretty large, with a king-sized bed.  There’s a big square frame around the bed, from which is draped a large mosquito net.  There’s no air-conditioning or ceiling fan, but neither is really necessary.  It’s about 60 degrees at night, and the room temperature is comfortable.  I unpacked my suitcase and backpack, set up my toiletries in the bathroom, and set up my phone charger on the bedside table.  I’m going to hit the sack.  Tomorrow is a “free day”.  Let’s see how we’re going to fill it.

January 2021, I joined the team of Mission Rabies volunteers on another vaccination drive. The destination: TANZANIA!

Our intention, as always, is to vaccinate as many dogs as possible, with a goal of immunizing 70% of the dog population. At this level of immunity, the rabies cycle is broken.

To do this type of work is expensive and requires many resources.  If you support the work that I am doing with this amazing organization, I ask that you make a donation to the cause.  Every dollar helps. During the mission, I will be posting many photos, as I did when I was in Goa, so you can see up close the wonderful work we do.