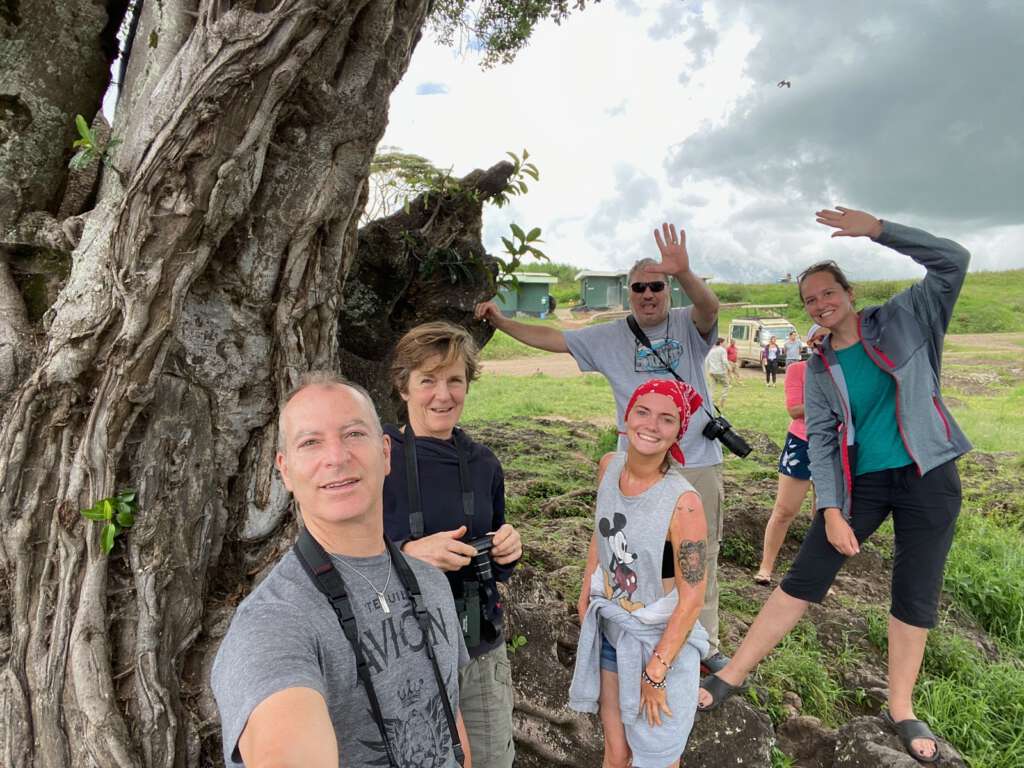 Last night I packed my bags for the big safari.  A towel, some soap and shampoo, contact lens stuff, insect spray, sunscreen, a change of clothes, and my Fujifilm camera (plus extra battery).  Headed off to breakfast with my similarly excited colleagues, and then we went out to the parking lot to the safari vehicles, which were already waiting.  Nine of us were going.  We broke into a group of five (me, Mike, Courtnie, Britt, and Jo), and four (Rob, Nick, Mandy, and Erica).  It worked out well because Britt and Rob are both birders, so each vehicle had someone who would be able to identify the many species of birds we were expected to encounter.

The ride to Tarangire was surprisingly quick.  The grounds were lovely. The first part of the park isn’t the game viewing area per se.  It’s called the conservation park, because the Masai tribe still live there.  We saw their little huts scattered across the conservation area, near the areas where they do their farming.  It’s amazing to see these people still living off the land this way, in peace and harmony with the animals, actually living among them.

The national park was beautiful.  We saw a variety of wildlife, very similar to the animals that Mark and I saw on safari in Kenya last year.  Impala, baboons, black faced vervets (smaller monkeys), warthogs, and giraffes.  There were wildebeest, too, which we hadn’t seen in Kenya.  There were elephants on this safari as well.  We saw elephants at an orphanage in Kenya, but not on the safari.  Britt was in our vehicle, and as a birder, she was able to identify all of the birds we encountered.

After a full morning of animal viewing, we drove to the picnic area where we found a table big enough for all 9 of us, and were served a very nice, hot lunch of rice, vegetables, and (for the first time since arriving in Tanzania) some meat.  It was chicken, and it was very good.  The meal was provided by the safari company.  The views from the picnic area were pretty nice, and there were lots of monkeys around, making lunch entertaining.  After our meal, we were given some small bananas for dessert.  A few unclaimed bananas were sitting on the table.  Suddenly, a monkey jumped on our table just inches from us, looked at us quickly, and then grabbed the unclaimed bananas and zoomed away.  We were shocked at the brazenness of it all.

We headed back to the park for some more animal viewing, and then drove to the lodge that would be providing accommodations for us for the evening.  Initially, I was told that we were going to be sleeping in tents, but one of the volunteers who went on the trip last year (she skipped it this year) was describing the accommodations, and she made it sound like we were going to be in small rooms.  I asked if there were electrical outlets and wifi and bathrooms and she said yes, so again, I thought we were going to be in actual rooms.  So I was a little surprised when they took us to a small lawn that was dotted with little tents and said that these were our accommodations for the night.

The tents were small, and they were to be shared by two people.  There was a sleeping bag and a small pillow.  The bathrooms and showers were located in a building about 300 feet away.  I fell asleep to the sound of crickets and birds.

We all got up bright and early, had a very nice breakfast, and hit the road to the Ngorongoro Crater.

Like Tarangire National Park, the first area you encounter isn’t the park.  It’s the “conservation area”.  The Masai still live on this land, in peace and harmony with the animals.  You can see the little huts that they live in.  It’s amazing that they’ve retained that way of life.

Driving a bit further in, we got to the first lookout point over the crater. There really are no words to describe the breathtaking view.

The vastness, the majesty… just awe-inspiring.  Definitely a moment for photos and selfies.

We then took the safari truck 610 meters down into the crater.

The wildlife you see in the crater is everything you could dream of.  We saw giraffes, elephants, impala, baboons, warthogs, jackals, hyenas, zebras, dik-diks, elands, wildebeest, rhinos, hippos, ostriches, buzzards, vultures, buffaloes, waterboks, storks, cranes, bustards, egrets, ibises, and over a dozen other birds that were identified by Britt, the birder in our group.  I did two safaris last year in Kenya, and they were great, but nothing like this.  Unfortunately, because I used my Fujifilm camera instead of my iPhone, the images of the animals I saw exceed the maximum size that I can post on this blog.  But you saw the same animals in the photos from Tarangire National Park above.

After viewing wildlife all morning, we took a break at a rest spot in the crater, by a lake.  A stunningly beautiful scene.

I broke out the selfie stick and got a pic of me, Mandy, Courtnie, Mike, and Jo at the bank of the lake.  In the lake were hippos; they came up to surface a few times.

We ate lunch not far from the lake.  All morning we’d seen beautiful blue/turquoise birds, and some lovely yellow birds.

Well, these birds have gotten pretty used to people, and they hovered around us at lunch time, scrounging for scraps.  They even landed right on our plates and grabbed some food.

We drove back up and out of the crater (the rapid ascent made our ears pop), and headed back to our hotel in Arusha.   We took a quick detour, though, to a prominent souvenir shop on the way.

Once back, Mike and I had to deal with a new issue:  the Netherlands issued strict new rules for flights landing in, or going through, the country.  A negative, rapid covid test would need to be done FOUR HOURS (!) before flight departure.  As a result, KLM was canceling our particular flight, and that included our return flight,  from Dar Es Salaam to NYC.  There are other airlines that fly from this area to NYC, like Emirates, Qatar Airlines, Kenya Airways, Turkish Airlines, and others.  We’ll figure it out later in the week.  Traveling during covid times is a challenge, I tell ya.