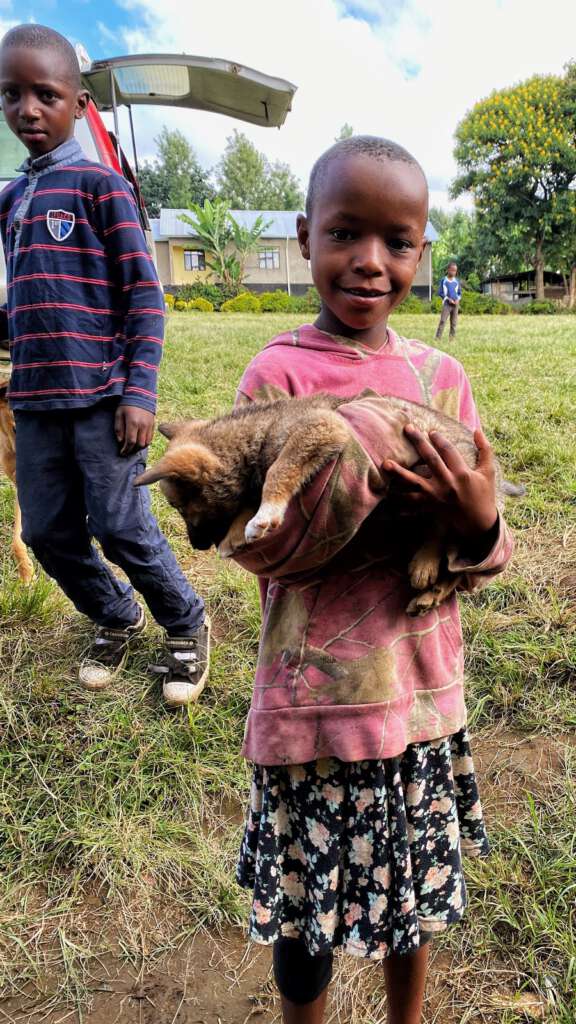 Mission Rabies Tanzania – Day 8, The Second Half of the Vaccination Drive Begins! Pt11

Today could only be described as exhilarating.   We started this first day of our second week with what we thought would be a quick trip to the medical clinic to get my second post-exposure rabies vaccine (I got scratched by a kitten last week).  Well, today is Saturday, and the doctor doesn’t arrive until 9:00.  We couldn’t wait that long, so we went to the site where we were to set up our static clinic, Seela Primary School.  There’s a big field that slopes downward, and the school is at the bottom of the slope.   When we arrived, there were already a few kids with their dogs, waiting for us.  We put up our banner and set up our supplies.  A minute later, they were crawling out of the woodwork.  Dog after dog after dog, led by kids, the majority of whom were under 10 years of age.  We quickly went into assembly line mode, with me vaccinating, our driver marking the head, Lucy filling out the card, and Courtnie entering their data in the app.  Vaccinate-mark-card-app, vaccinate-mark-card-app, vaccinate-mark-card-app.  After an hour, we had vaccinated 22 dogs, which is one more dog than we had done for the entire day last Wednesday.

There was a tiny break in the action, and Courtnie insisted that the driver and I zoom off to get our vaccination now, while there was a break.  I didn’t think this was a real lull, just a tiny pause, but she insisted that I just go and get it over with so it’s not hanging over our heads.  So we left.  At the clinic, there were a few people ahead of us, but we managed to get my vaccination and our driver’s vaccination (he was bitten last week).  Then we stopped to refill our water supply before heading back to the primary school.  Stealthily took this picture of a kid at the doctor’s office; he had a toothache.

When we arrived back to the primary school, it was mayhem.   They had run out of vaccination cards (the extras were in the supply box, which was in the back of the truck that we were in. We never even considered that they’d run out of cards.)  As we arrived, a crowd of kids were patiently (well, a little impatiently) lined up, waiting to get their vaccination cards.  Their dogs had already been vaccinated.

Other people were standing around with their dogs, waiting for the next round of vaccinations to start back up.  We had also run out of the stickers that had the vaccination serial number on them.  I sat down next to Courtnie, grabbed a stack of vaccination cards, and frantically began filling in the date and vaccine serial number on all of them. Normally, Lucy asks the people their name, their dog’s name, and the dog’s gender in Swahili and writes it on the card.  There was no way that Lucy could handle all of this by herself, so Courtnie was doing it as well.

This can be tricky because some of the Tanzanian first names and surnames are difficult to understand and spell, and many of the kids speak quickly, softly, or both.  Courtnie and I have learned many of the basic Swahili words and phrases (Hello, how are you, I am fine, what is your name, dog, cat, thank you, good bye, etc.), but “Could you repeat that?” was not one of them, so if we didn’t quite catch the kid’s name, we would ask their name again.  They looked puzzled by this, thinking they had given the wrong answer.  The best approach was just to take our best guess as to what they said, and write it down phonetically as best we could.

Asking the dog’s name was easy; 80% of the dogs are named Simba.  After I filled out all of the cards, there were a few kids still in line, so I did some of the interviews.  It was pretty odd (and really wonderful, actually) sitting there looking into the face of an adorable, shy six year-old girl and asking her name and her dog’s name, and hearing her politely answer in her quiet, sweet voice.  As I was frantically putting stickers on the cards and filling them out, I had an audience watching over my shoulder.  I pulled out my phone, put it in selfie mode, and took a quick picture.

We finally got caught up and we were able to vaccinate the rest of the dogs.  A small crowd of kids gathered around watching all of the festivities, and they stuck around afterward, as is typical.  One kid (Kevin) stuck around and began helping us out.

Many of the kids bringing the dogs were very young and were unable to properly restrain their dog for us to vaccinate.  In those instances, Kevin took over, restraining the dog properly.  It was very helpful.  When he wasn’t helping us out, he hung out with the kids, paying special attention to the young ones.  He picked up a little kid and walked around with him, even though the kid wasn’t his sibling.  He also put his arm out against a pole so that a small kid could do pull-ups on his arm.  He was just a genuinely kind guy.

When things finally settled down, I was able to talk to him a bit.  He spoke English pretty well and he was flattered when I told him so.  He said he was 18, and just finished secondary school in Dar Es Salaam.  But his parents had just split up, and he had to come back to Arusha.  Now he was living with his grandmother.  To pass the time, I showed the kids how I can grip one of the poles in front of the school and extend my body perpendicular to it (a gymnastic trick I learned years ago), and they all tried copying me, some succeeding, some not.  As the crowd of kids thinned out, I tried entertaining them by showing them photos from back home, photos that I had taken in various parts of New York City.  I also showed them some short videos I had taken of a boat ride that Mark and I had taken around Manhattan  The videos showed the downtown Manhattan skyline as the sun was setting.  Kevin remarked how beautiful it was. He then asked me, in his halting English, if there would ever be a way to get to America and have a better life.  It was heartbreaking.   I don’t harbor any illusions about what I, personally, can and cannot do for people.  But I got his name and email address, and his phone number, and when I get back to the US, I’m going to ask around about programs that sponsor kids in other countries, to help them come to the US and get an education.

As things finally came to an end at our static point clinic, we did a little announcing and roaming, to try to get a few more vaccinations done before calling it a day.  On the ride back, our driver had to return the big water container in the truck.  The place he had to bring it was a huge, bustling market.  He asked if we wanted to walk through the market with him.  We definitely did.  These are the kinds of places that I enjoy seeing when I travel.  It was crowded and nobody wore masks, so I made sure I kept mine on tightly.

We finally got back to the hotel, exhausted after a crazy busy day.  Now I have to contend with trying to figure out if our original flight on KLM is really canceled, and what to do about it.