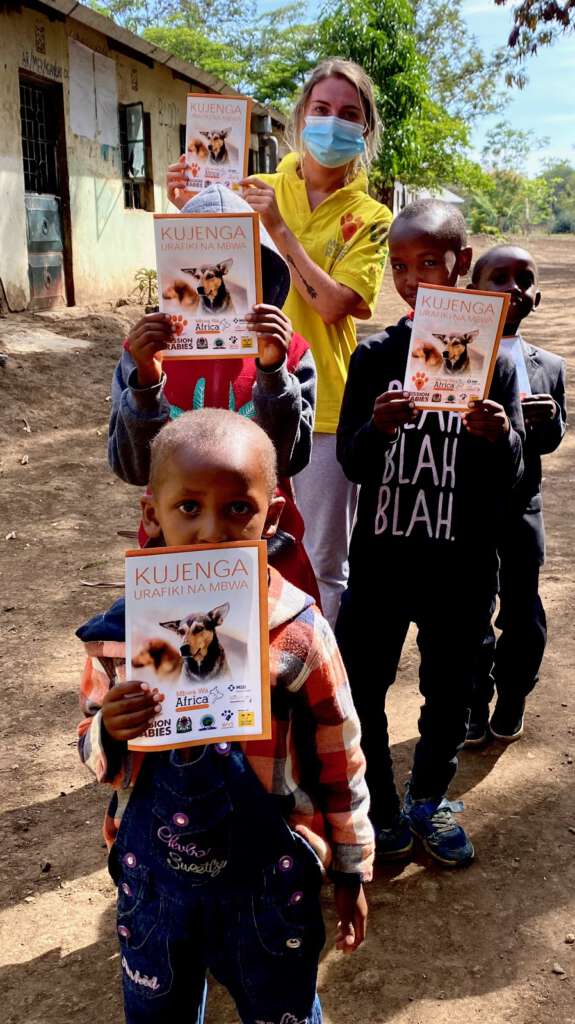 Well, it’s confirmed.  Our KLM flight is definitely a no-go.  Initially, KLM sent me an email saying that our flight was a Covid-Tested corridor flight and is therefore exempt from the new Netherlands regulations.  Now I’ve received an email that said that the first email was sent in error.  Our flight is NOT a Covid-Tested corridor flight.  It was just a regular ol’ flight, and it has been canceled.  Tonight we’ll do our best to book a new one.  Sigh.  Not the kind of stress you want to have on a trip like this.

Today’s format was a repeat of yesterday’s:  static point clinic in the morning, roaming static clinic in the afternoon.  Once again we set up shop at a primary school, this time in the area of Seela.

We arrived, put up our banner, made a makeshift table of sorts out of our big water container and supply box, and the kids and dogs started appearing.

It was much slower than yesterday, though.  Steady, but not frantic or overwhelming.  It’s Sunday and a lot of people are in church, but we did get a fair share of dogs, and a few cats.

One guy arrived with a friend on a motorcycle.  Between the two of them was their dog.  The dog seemed perfectly comfortable riding on the motorcycle.  His dog looked great and he really was taking excellent care of it.

After vaccinating a bunch of dogs in the morning, some of the kids stuck around and kept us entertained.  We had a lot of fun with them.  Courtney pulled up snapchat on her phone.  It’s an app where, when you look at the screen, the appearance of your face changes.  You can select a variety of options, such as adding dog ears and a nose, or a beard, or a cat’s face.

Courtney went through the gamut of options, and the kids found many of them hilarious, although one kid found it all just a bit shocking.

Courtney took a picture of me using the filter that turns your face into a child’s face.  Definitely freaky.

Later, I folded some of the brochures into paper airplanes, which they enjoyed playing with.  We gave them Oreos and other snacks we had (they weren’t sure what to make of the dried figs I gave them), and I showed them pictures from the safari we recently went on.  In general, we had a pretty fun time.

Finally, it slowed down to a trickle, so we packed up our gear and did some roaming.  We stopped by a few homes to vaccinate their dogs (and cats), but we were having trouble getting a good signal to follow our map. Our truck also got stuck in the mud and we had to get out and push.  Courtnie and I both got out and pushed, and ended up covered in mud.  Courtnie bore the brunt of it.  Her sneakers got immersed in the mud, and she also fell and got mud all over her butt.  It was then that we decided to call it a day.

I got back to the hotel and went to my room.  I opened the door, and there, on my bed, was one of the little cats that lives on the hotel grounds.  She must have sneaked into my room in the morning without my knowing, and I locked her in all day.  She looked pretty comfy on the bed, but she did get up and dart out when I approached her. The other day, Courtnie went to the supermarket nearby and bought some packets of cat food for the guesthouse cats (there are two of them. They have similar markings.  They do not get along with each other, however.)

I scoured the room and didn’t find any evidence of cat pee or poop, so I guess I got lucky.  After de-mudding myself at the hotel, I popped by Mike’s room and using his Macbook Pro, we logged into the Qatar Airways website to see what flight options we had.  It turns out that Qatar Airways had a flight on that same evening, departing around the same time as our original flight, and arriving in New York around the same time that the original KLM flight was supposed to land!  We went ahead and booked that flight.  Now, our original itinerary doesn’t have to change at all.  We can still go to Zanzibar and Dar Es Salaam exactly as we planned.  Mike, however, had to make a minor change.  Because our flight arrives at JFK an hour later than the original KLM flight, Mike would end up missing his connecting flight to Portland.  So he rebooked the next flight, which leaves the following morning. Mike will stay over my apartment for a night before flying back to Portland the next day.  I’m glad that’s all out of the way.