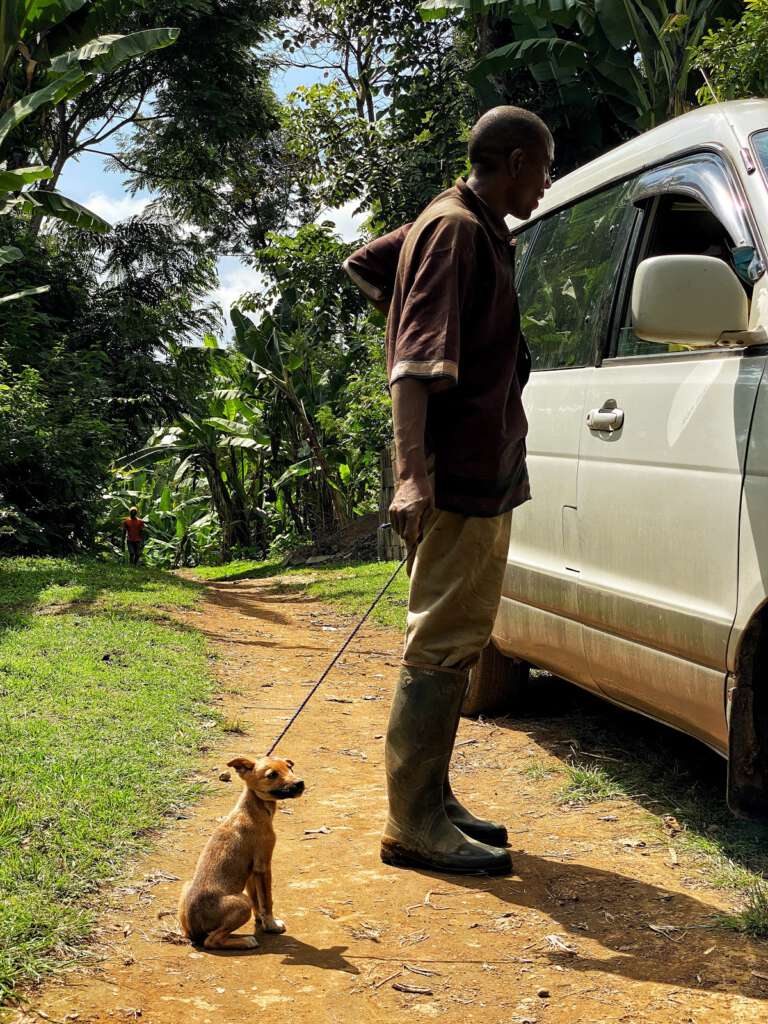 Today marked the last day of the first week of our Mission Rabies Tanzania project.  Our assignment today was to go back to an area up in the mountains called Nkoarisambu.

A Mission Rabies team had already been there, but the post-vaccine survey revealed that we’d fallen shy of the 70% needed to break the cycle and stop the spread of rabies.  So we went back to try to vaccinate a few more.

These kinds of assignments feel a little less rewarding because you don’t get to vaccinate very many dogs; most of the people you encounter tell you that their dogs have already been vaccinated by us.  But this makes the ones that we do vaccinate feel even more important, because it’s these ones, the ones that managed to hide the first time we came around, that will take us over the 70% threshold when we do finally snag them.

I’d been teasing Mike about his ability to fall asleep anywhere, at any time.  I can understand being tired after a long day of vaccinating in the hot sun, but this morning he fell asleep while sitting in the van, waiting for the day to begin.

I had the camera ready, and Courtnie happily joined in the teasing.

Before our own team started the day, we had to take Courtnie to the local hospital for her second post-exposure vaccination.  The drive to the hospital took us through Arusha as the day was beginning, and people were out and about. Markets were opening, and it all made for an interesting scene out the window of the van.  We spend a lot of our time driving the back roads to the villages that we’re servicing.  We don’t spend much time on the main roads, so it was nice to go through them on the way to the hospital this morning, to see more of what bustling Arusha is really like.

Anyway, we were headed to the hospital because Courtnie had gotten a tiny, tiny scratch by a cat.  Although the scratches were really small, Helena insisted that she get the vaccine; better safe than sorry.  The day before Courtnie had gotten scratched I, too, had gotten a few tiny scratches by a kitten who was being held improperly by its owner.  At the time, I insisted that they just let me clean it really well and not go for vaccination. The scratches were barely perceptible, but yes, they did puncture the skin a little. I was starting to feel guilty about it, so I mentioned to Amy (the coordinator) about the scratches on the drive, and she said hey, we’re already on our way to the hospital for Courtnie, might as well get a shot for you too.  So I got my first one while Courtnie got her second one.  On Saturday morning, before the next week begins, I’ll get my second one.

We had a LOT of ground to cover.  This involved us driving very slowly on brutally bumpy roads, tossing us around in the backseat like dolls.  There’s no air conditioning in our truck.  Courtnie’s window doesn’t open, and my window is broken so that it opens only four inches.  I’ve tried pushing it down more, but it’s no use.  It’s stuck.  Poor Courtnie.  She was so warm back there that she was pouring water over her head, while in the truck.  When we do stop, though, no matter how short an interval, I immediately open the door and we zoom out of the van, enjoying the breeze.

Once again, we started the day with an adorable puppy. (Cover image of this post)

I think that starting the day with puppies sets a good tone for the day.  This little pup was so cute.  He was enjoying having his head scratched as much as I enjoyed doing it.

We’re way up in the mountains, and the homes up here are very nice by Tanzanian standards.  People take pride in their dwellings up here, and many of the yards and pathways are very nicely landscaped.  We serviced one home that was a small farm.

They had chickens, goats, cows, and a few dogs, which we vaccinated.  The farm was lovely.  Nicely manicured lawn, clean and healthy looking animals, and a very jovial, very appreciative owner.  It was a very enjoyable visit.  His dog was very sweet, and I got a great picture of him sitting by the car, after he was vaccinated.

We continued driving through all the mountainside paths.  We then hit a clearing, and the view was amazing.  Majestic mountains, lush green valleys… it was gorgeous.

Lucy showed us a strawberry bush, and we ate wild strawberries.

As the clock approached noon, we looked for a place to take our lunch break.  The organization packs lunches for us.  We’re not allowed to eat in the truck, because that would require taking off our masks, and we can’t do that unless we can socially distance, which is impossible in the truck.  We saw a nice home with an adjacent small building on the property.  That building had a small porch with a small overhanging awning that provided a little shade.  Our team leader, Lucy, asked the owner if we could sit on the porch and have lunch, and they said yes.  While we were eating, the owner’s daughter shyly appeared to observe us.  She is 19 years old.  We said hi, and she answered us in halting, but very good English.  We had a nice conversation with her, asking about her life in Tanzania.  She is going to college; she wants to be a teacher.  I really like interacting with the local people.  We took a few photos before it was time to get back to work.

I wasn’t worried about the machete in her hand.

In fact, Courtnie borrowed it and pretended to attack me with it.

The rest of the afternoon went the same.  We drove through some beautiful parts of the mountain, stopped, and then went into homes and vaccinated (or attempted to).  Kids were everywhere as usual, and I got this pretty cool picture of these two boys.

As the end of the day approached, we visited one more home which was located a bit off in the distance.  As we followed the winding path to the home, a clearing opened up, and the view of the valley below was amazing.  We had to stop and take it all in.  Our driver Eminoel and team leader Lucy take these views for granted, so they always seem a bit surprised at our reaction to the scenery, but they find it flattering that we’re so taken in by the beauty of the place.  Even they had to admit that the view from up here was incredible. We posed for a few photos before continuing on to the house. Unfortunately, the owner wasn’t in, so we didn’t get to vaccinate his dogs, but the journey was worth it, just for the views.

At dinner, the WiFi connection was pretty strong, and we were able to watch, on my iPhone, the inauguration of Joe Biden and Kamala Harris.  It was a great ending to the day.

Tomorrow begins the safari weekend!  I cannot wait to get to the Ngorongoro Crater!