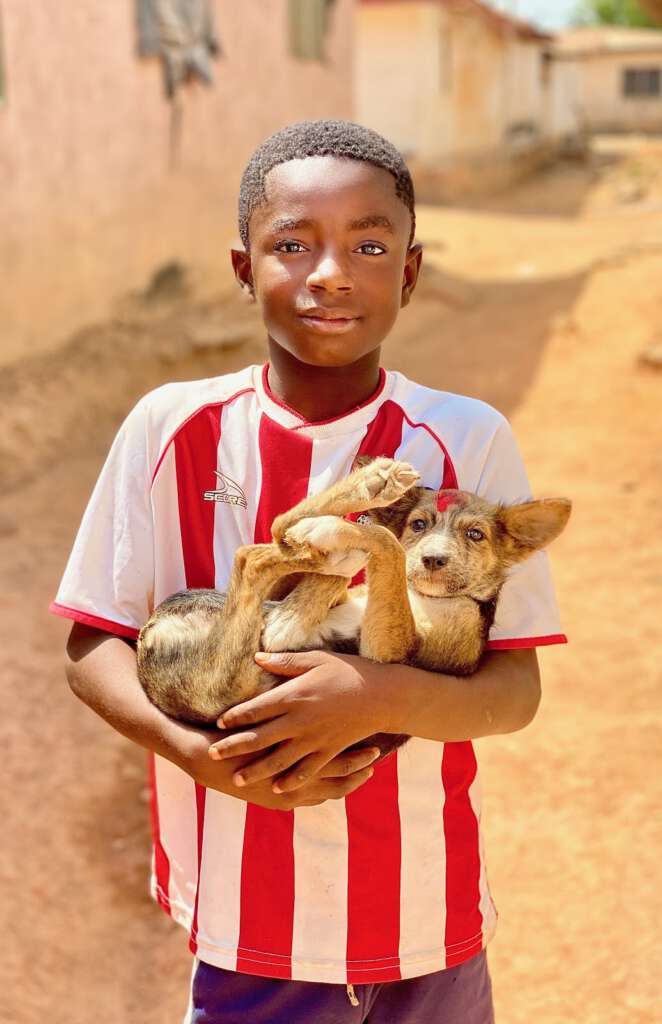 Day 2 started out well; excellent breakfast, then, off we went to the Mission Rabies Ghana Health Center, to load up our bags, meet with our teams, and hit the road.  I saw Jo there testing out one of the megaphones, and I asked her if she could do her very realistic impression of how a dog with rabies barks. Rabies causes discomfort in the throat, impairing the ability to swallow and changing the sound of their bark.  Apparently, they sound just like this:

Today, the makeup of our team was different.  Charlotte, the Ghanaian veterinarian, was assigned a different team today.  The Community Health Officer (CHO) from yesterday was also different today. Instead, we picked up two new women, Janet and Kumiya.

Our first stop was the local market, where the team members purchased food to eat later, at lunchtime.  Even though I usually don’t buy anything, I like to get out of the truck and check out the scene. There are lots of kids around, and they’re very friendly and try to engage me somehow, and that leads to good photo opportunities.  You can see one of the Mission Rabies banners hanging in the market.

I did see one woman, though, who really caught my eye.  She was selling avocados, and she had a beautiful, worldly face.  I have no problem asking people if I can take their photo, but I just felt weird asking this elderly woman for permission.  I asked Adusei if he could ask her for me. He did, and she smiled and said okay.

Today, we were doing a static point clinic, in an area called Abuontem.  It was in an open area, with no shade. We arrived to find people sitting on benches with their dogs, waiting for us to show up.

Whoever notified the community that we were giving free rabies vaccines today did a very good job.

I don’t think Kumiya had gone out on a Mission Rabies assignment before, because she wasn’t all that familiar with the protocol, but she picked it up really quickly.  We got into a pretty good groove. The sun was blazing, though, and I was definitely starting to feel that heat. Fortunately, it was decided that we would move to a nearby building that normally serves as a community maternity center.

There was a small outdoor terrace area where we could vaccinate the dogs, but when not vaccinating, we could sit inside, under a ceiling fan.  I was a little concerned that we had moved from a very central, visible area, to a more isolated area, but I needn’t have worried. People were coming with their dogs at a nice steady clip.  The majority of these dog owners were kids. Kids and dogs are great photographic subjects, and I didn’t let these opportunities slip by.

They love their dogs, and they are proud owners displaying their just-vaccinated dogs.

Everything was going very smoothly today, and then… we received some truly terrible news.  Mission Rabies works with local community officials to spread the word about rabies and rabies prevention.  I’ve mentioned these folks in the last post, and in the second paragraph of this post as well. They are known as Community Health Officers (CHO), and amongst their many community tasks is going to the schools and giving talks to the children about the dangers of rabies and the importance of vaccination.  Yesterday, one of the CHOs, a woman in her 30’s, married with two young children, did not come home from work last night. Today, it was discovered that she had been attacked and killed by a group of men sometime after getting off the bus from work. Her body was found this afternoon. Janet and Kumiya both knew her, and they broke down and cried when they heard the news. All of the teams out in the field received a WhatsApp message that we should wrap things up early today, and meet back at our base no later than 12:30 this afternoon.  The rest of the day was canceled out of respect for this colleague. Kumiya showed me a video of the woman in a school classroom, educating a group of children about rabies. By all accounts, she was a wonderful person.

All of the teams met back at the base, and then were driven back to the hotel.  I wasn’t expecting to have the afternoon free, and wasn’t sure how to spend my free time.  I asked one of the guys who works at the hotel how far up the road was the next village, and whether I could access the lake from there.  The section of the lake that we have exposure to via the hotel is beautiful, but it’s just a tiny section, and I wanted to see if there was another viewpoint.  He said it was about a 15-minute walk, and that yes, I could get to the lake from there. I grabbed some water, put on some sunscreen, and started trudging up the road.

For the first ten minutes, it was nothing but dirt. Then a few goats appeared. I soon found myself in a small village.

Some kids were pumping water from a well.  Others were carrying the water back to their homes in pails, on their heads.

I also passed a little bodega selling drinks and snacks.  This is a very religious country, and many local businesses have dramatic, religious names, like Blood of Christ Barber Shop or Repent Now Bakery.  This little shop was called “By The Grace of God”.

As I passed by the houses, I kept hearing shouts of “Hi!” and “Hello!!” from all directions.   I’m sure they never see any tourists in these parts, and certainly not white ones. Everyone found me fascinating.  One woman called over to me, and I decided to go over and talk to her. She was there with her whole family. She and her husband spoke surprisingly good English.  The kids did not.

I told her I was from the U.S. and that I was here working with an organization that vaccinates dogs against rabies.  The father said something to one of his sons, and he went inside the house and came out with a Mission Rabies educational leaflet!  I said yes, that’s who I’m working with. He must have picked up this leaflet in school. That was very encouraging to see.

I then walked through his plot of land, and soon arrived at the lake.

I had a small trail of children following me, and of course I ended up taking their photos as well.

I then went back through that family’s yard, and chatted with them some more before heading back to the hotel.  I was thinking to myself that this was an amazing experience and that I should have spent more time in the village, when I saw Anke coming toward me on the road.  I had mentioned that I was going to check out the next village earlier, and she initially declined my invitation to join me. But I guess she decided to check it out herself.  I told her about the village, and then decided that I should see a bit more of it, so I asked Anke if I could join her, and she said yes. I went back to the village with her, and I saw the lake one more time.  I’m glad I did.

Ghana is a small, very poor country, and this is a very remote, non-tourisy area, and I will never see or experience anything like this ever again.

I went back to my room, freshened up a little, and then headed down to our stretch of the lake again, to try to catch the sunset.  As I was heading down, Laura was heading up. She said that she was down by the lake and she saw a dog that appeared to have it’s muzzle wired shut!  She was heading back to the hotel to ask Jo what to do about it. I headed down to the lake and was taking photos and relaxing, and I was suddenly approached by a small, friendly dog.

As it came closer, I could see that there was something wrapped around its muzzle, very tightly.  The muzzle was swollen and the dog was completely unable to open its mouth. Whether this dog got its muzzle stuck in a fishing net, or if someone deliberately did this to the dog was hard to say, but I suspect the latter.  The dog let me pat it, and I took a photo of its face. Very upsetting.

I headed back toward the hotel and asked one of the workers if he had scissors.  He did not, but he did have a blade from a box-cutter, and I took that and headed down to the lake in the hope of cutting that wire, but when I got back there, the dog was gone.  I looked for it and called for it, but it never re-appeared. Extremely upsetting and frustrating. I waited and searched for that dog some more, but it was gone.  This is going to disturb me for a while. I will search for it tomorrow before breakfast.

[Spoiler alert:  things with this dog worked out fine in the end.  I know that the people reading my blog are animal lovers like me, and I don’t want to leave anyone too worried or upset about something like this.]

I hung out and watched the setting sun.  It was stunning. Completely peaceful and quiet on the lake, with the beautiful orange sun setting above the trees.

Recently here in this region, a 12-year old boy died of rabies after being bitten by a dog. There is still much work to be done here, and in Asia as well. Our Mission Rabies work is helping to reduce these awful incidents. To continue this work requires financial resources, the vast majority of which come from individual donations. If you’ve enjoy my postings and support the work I’ve been doing, I hope you’ll take a moment to make a donation to help support my mission in Ghana and future missions.

To do this type of work is expensive and requires many resources.  If you support the work that I am doing with this amazing organization, I ask that you make a donation to the cause.  Every dollar helps.