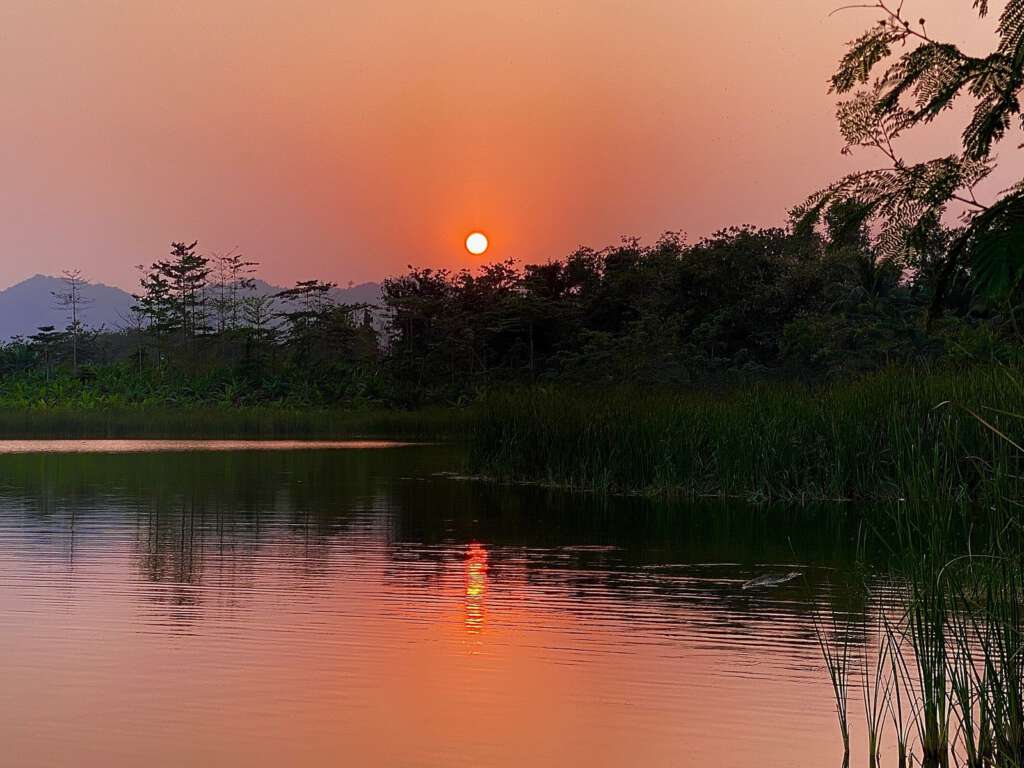 Mission Rabies Ghana – Chapter 6: Visit to Adagya, and Fishing on the Lake

Today we went out to a very remote area today, a village called Adagya, and set up a static point clinic at another community maternity center.  Our team was me and Adusei, Charlotte, and a new Community Health Officer (CHO) named Naomi. And our driver, Moses, of course. We all met up at the base, loaded our bags, and headed out.  A lot of socializing happens in the morning at the base camp.

As usual, we stopped at the market down the street for Adusei, Charlotte, and the driver to grab some food for lunch.  As I mentioned previously, this is my favorite part of the day, as there’s a lot of activity, and it’s all very interesting.  I saw the lovely avocado lady again, and we smiled at each other.

Lots of school kids were around, waiting for their public transport bus to take them to their school.  It’s interesting to see all the different school uniforms.

I also get to see all sorts of different foods being cooked and sold on the street.

I asked Adusei and Charlotte about some of them, and today I bought these deep fried things. I guess they were some kind of fritter.

They were very tasty, and very inexpensive, each one costing about 4 cents in US money.

The drive to the static point clinic was pretty long, about 40 minutes.  I don’t know exactly where it was on the map, but it really felt like the middle of nowhere. I took a brief video of the drive.  I think during these drives you really get to see the landscape here in central Ghana. It’s a good overview of the homes, shops, terrain, and people. You can also see the many half-finished construction projects that are everywhere.

After we arrived, Charlotte, Adusei, and the driver went out in the truck, with the megaphone, and announced that we were offering free vaccines.

It would be a couple of minutes before dogs started arriving, so I took a little stroll toward the nearby school.

I saw some kids playing volleyball, so I strolled over.

They noticed me and gave me a bunch of stares, and I was sort of hoping they would call me over and I’d get to chat with them a bit. There’s no better way to get to know a country and its people than by just talking.  But the truck arrived back at the clinic, so I had to head back and get ready. About five minutes later, people and dogs started arriving in droves.

Much of the day was spent at the static point clinic, vaccinating dog after dog.  There were lots of puppies today, including a basket of tiny lil’ ones, brought by a group of kids.

During a lull in the action, I decided to learn a few words in Twi (pronounced “tree”), the local language.  I had already learned male (“bema”) and female (“oba”), and had freaked out a few people yesterday when I was filling out the patient form on the cell phone app and I pointed to their dog and asked “oba or bema?”  Today, I added “eti sen” (how are you), “aane” (yes), “dabi” (no), and “medase” (thank you) to the vocabulary. Later on, a kid walked by while I was sitting outside the clinic. He waved, and I waved back and said, “Eti sen”, and he was stunned, and then gave me a huge smile.  I also started saying “medase” after I took photos of the people, and they thought it was amazing that I could speak their language. I can tell you very assuredly that tourists do not come to this part of the country, especially a white guy, and I remained an endless source of fascination for the locals, especially after uttering a few words in their native tongue.  I’m going to try to expand my vocabulary a little every day.

As the day was coming to a close, the static clinic started to get a little slow, so I went out with Charlotte and we roamed the area in the truck, announcing free vaccines out the window with a megaphone.  A few more people came out of their homes with their dogs, and we vaccinated a few more, to end the day on a high note.

I immediately headed down to the lake, rather than go back to my room.  The sun starts setting here right around 5:30, and by 6:00 it is no longer visible.  I found my wooden bench and grabbed a seat, and watched the last 15 minutes of the sun in the sky.  Just beautiful.

I was also hoping that I’d see the dog from yesterday (see my last posting), but alas, I think it’s gone forever.   It was a social, friendly dog, and I can only hope that some kind person sees what’s going on with this dog and removes that wire. I don’t want to think about it much more, as it will only upset me.  All I can do is hope that someone does the right thing. People here really seem to love their dogs, so I’m going to try to remain optimistic.

People fish in this lake, and while I was watching the sun set, there were a bunch of local guys working a huge fishing net.  I watched them drag it through the water for a while.

I also passed by their basket and was amazed to see it filled with lots of small fish, and one huge fish.

One of the guys saw me looking in the basket and he came over, pulled the big one out of the basket, and posed for a proud photo.

I didn’t stick around to see the spoils of this most recent turn with the net, but I’ll bet they snagged a lot more.

Dinner tonight was great: sweet and sour vegetables, and white rice.  All the meals provided by Mission Rabies are vegetarian, and some are better than others.  This one was pretty good. I haven’t had meat for five days now.

Today was Peter’s birthday.  He’s one of the volunteers. His wife, Ingrid, arranged for there to be some cakes at the dinner. This was the first night that there was any kind of dessert, and I guess I’m not the only one here with a sweet tooth, because those cakes vanished in seconds. It was great.

Looking forward to vaccinating the next group of Ghanaian doggies.