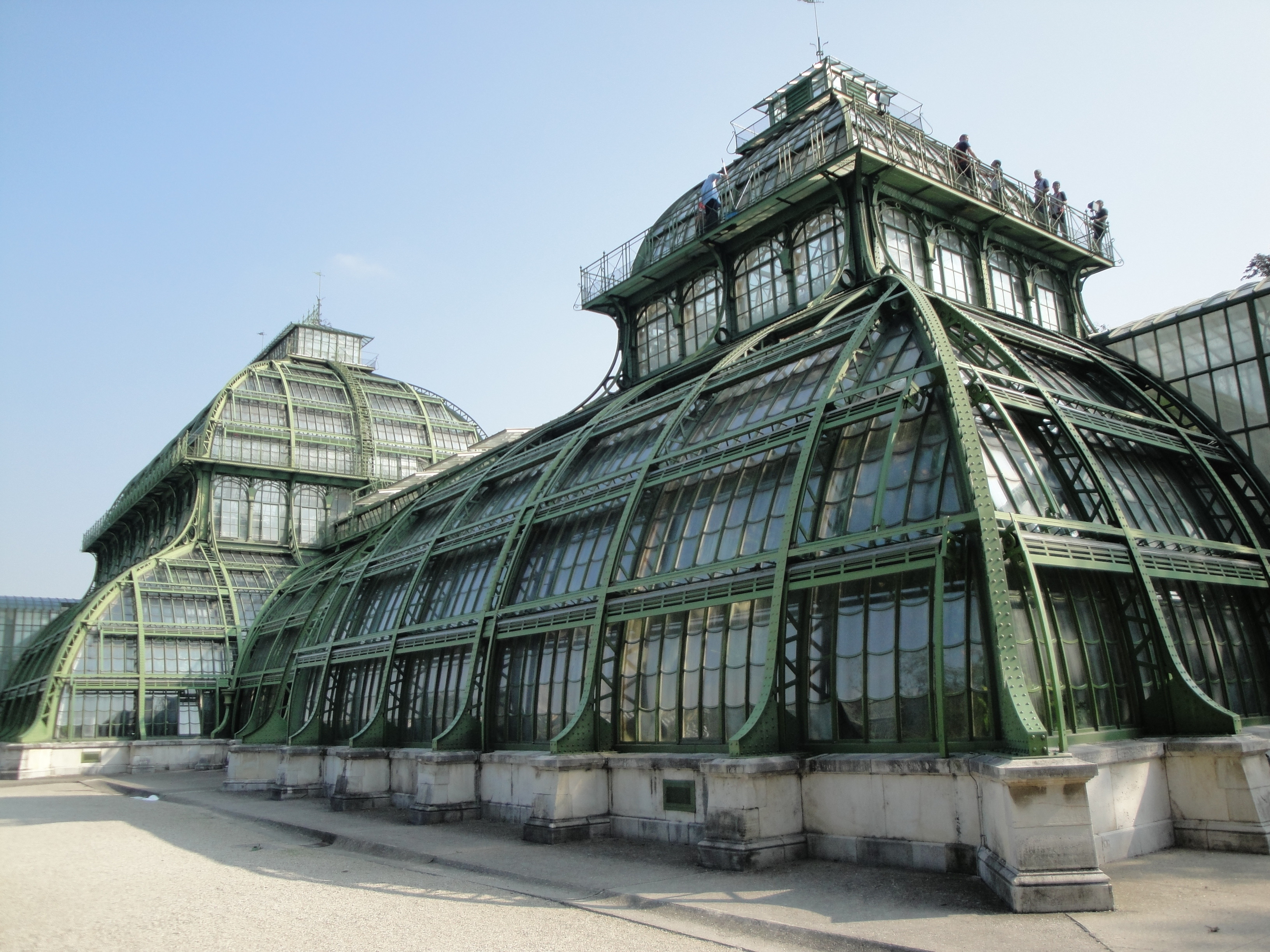 Once again, I’m sitting on a train, heading to a new country. This time, the Czech Republic. This train is very fancy. I’m in a private, six car booth. We have all six seats to ourselves. The door is closed, and its as quiet as a tomb. There are many stops between here and Czech Republic, so I suspect the seats in our little room will fill up. Might as well enjoy the silence for now. It’s 10:00 a.m. The Vienna portion of our trip is over, sadly. We’ll be in the Czech Republic at 2:30 p.m. Vienna has been really interesting. This is a very diverse, cultured city. On Monday, we took the train from our Metro station a few stops to the Schonbrun Palace. This is the former summer residence of the imperial family. Lots of gardens, trees, statues, and alleyways.

We took a tour inside and saw the breathtaking decorations in the staterooms, and the more understated apartments that were occupied by Franz Joseph and Empress Elizabeth. After exploring the palace, we strolled the grounds, taking photos of amazing gardens and statues. We skipped the zoo and the garden labyrinth, and instead visited the Palmhouse, a magnificent tropical greenhouse erected in 1882. It houses a vast collection of exotic plants. We took the train back to the center of the city, to Karlzplatz, and found the famous Trzesniewski restaurant, where we were treated to a huge array of little finger sandwiches. We chose six and shared them, eating at one of the stand-up tables outside, like the locals do. A few minutes later, we went back to the Opera house, to admire it during the daylight.

We saw the famous Hotel Sacher right behind the Opera house. It is here that the Sachertorte was invented. I strolled across the street to see the Monument Against War and Fascism again, in the daylight, and then strolled up the street to the Kaisergruft, the imperial burial crypt of the Hapsburg dynasty.

This was very solumn, peaceful, and a bit creepy (in a fascinating way).

The crypt was dark, damp, and deadly quiet, and we had the entire place to ourselves. I took many photos of the somewhat gruesome adornments on some of the crypts.

Across the street from the crypt, there was a cool fountain, the Donner Fountain. The four figures on the statue represent the tributaries of the Danube. We continued walking up Kartnerstrasse, a grand mall-like street with high-end shops. At the end of the street, Kartnerstrasse runs into Stephansplatz, Vienna’s colorful and fun main square. Situated in the center of Vienna, St. Stephen’s church is the soul of the city itself. The church has stood on this site for 800 years. We marveled at the sumptuous interior, and took lots of photos. To get a better view of the city, we foolishly paid 3 euros to climb the south tower, because it supposedly offered a better view than the north tower. Well, the north tower at least had an elevator to get to the top. To get to the top of the south tower, I had to climb 343 steps in a tightly winding spiral staircase. By the time I reached the top, I was ready to collapse. The views were spectacular, though. Facing the church is Hass Haus, a shining modern building of glass and blue-green marble that curves elegantly around onto the next street, the Graben. The building has a very pleasing asymmetrical appearance, with lopsided cubes of marble attached to the façade, a protruding structure high up resembling a diving board, and a Japanese bridge inside. Lots of fancy shops and restaurants are found in this building. From the church, I strolled down Graben, another busy shopping street, with many smart boutiques and neat rows of cafes. In the center of this street is the giant Column of the Plague. During the Plague of 1679, Emperor Leopold I vowed to commemorate Vienna’s eventual deliverance by commissioning the building of a Baroque plague column. Devised by the Jesuits, the most striking image shows a saintly figure andan angel supervising the destruction of a hag representing the plague, while the bewigged Emperor above prays. Graben dead-ends into Kolmarkt, Vienna’s most elegant shopping street. I spotted the famous Demel, the ultimate pastry palace, and got a scoop of blueberry gelato, and a couple of chocolate bars to bring back home. Kohlmarkt ends at another plaza, Michaelerplatz, where you come face to face with the grand entry façade of the Hofburg Palace. We’ll be tackling the palace tomorrow. Across from the entry façade is Loos Haus, a bank designed by Adolf Loos, one of Vienna’s best-known architects. We’d seen the major sights of Old Vienna.

We headed back to the hotel, rested, showered, and then headed back to the same area, for dinner, then a casual stroll around the city before calling it a night. Tuesday’s itinerary was a big one. In the morning, we were up bright and early to see the Hofburg Palace, a vast complex containing the former imperial apartments, several museums, a chapel, a church, the Austrian National Library, the Winter Riding School, and the President of Austria’s offices.

The plan was to visit a museum or two and stroll the grounds, but the Spanish Riding School was having a warm-up session which was open to the public.

The origins of the Spanish Riding School are obscure, but it is believed to have been founded in 1572 to cultivate the classic skills of haute ecole horsemanship. These horses, the famous Lipizzaner stallions, from Spain, are bred and trained from the age of three. In the building known as the Winter Riding School, you can see 80-minute shows, set to music. The building was built in 1729 and is beautiful. I took many photos and short films of the morning exercise session (despite several announcements that photos and videos were forbidden). (Hey, you know me… the moment you tell me I’m not allowed to do something…) The riders had great uniforms, with black bicorn hats, coffee-colored waisted, double-breasted jackets with two rows of brass buttons, pale leather gloves, buckskin jodhpurs, and long boots. Traditional Viennese music plays over the sound system. I’ve always loved horses, and I watched the training, enthralled. Check out the video below. You can see how majestic the horses look, and how beautiful the arena is where they perform. After the horses, we checked out the state apartments, including the rooms occupied by Franz Joseph and Empress Elisabeth. The ticket included the “Sisi” Museum. Sisi was the nickname given to the Empress, who is a beloved figure with a cult of personality surrounding her, much like Evita Peron. The museum was pretty interesting. Apparently, to preserve her beauty, Elisabeth slept with a piece of raw veal on her face every night. The veal was held in place by a leather face mask. That must’ve smelled great in the morning. We were hoping to take a tour of the Opera house, but the unplanned horse-training session put us a few hours behind, and we were starving. The Opera house would have to wait. We headed to Naschmarkt, Vienna’s liveliest market, with some of the best snack bars in Vienna. On the way, we passed a very interesting building, The Secession, designed as a showcase for the Secession movement’s artists. It has a striking filigree globe of entwined laurel leaves on the roof. On the façade, in gold letters, it says “Der Zeit ihre Kunst, der Kunst ihre Freiheit”, which translates as, “To every Age its Art, to Art its Freedom”. Alongside the building is the marvelous statue of Mark Anthony in his chariot being drawn by lions. We skipped going into the Secession, although I would have liked to see their best known exhibit, Gustav Klimt’s Beethove Frieze. It covers three walls and is 100 ft long. After admiring the Secession building, we went to Naschmarkt and I got some traditional Wiener schnitzel. In the background, I could see Theater an der Wein, the oldest theater in Vienna, designed in 1801. We strolled down the street after lunch, to the Wagner Apartments, two remarkable apartment buildings designed by Otto Wagner in 1899. Number 38 has sparkling ornament, and Number 40 has subtle flower patterns in pink, blue, and green. Number 40 is also known as Majolikahaus, after the glazed pottery used for the weather-resistant surface decoration. The building next to it, Number 42, is in historicist style, and is exactly what Secession architects were rebelling against. Decisions, decisions. Do we head to the Opera house for a 50 minute tour, at 4:00, or do we head to the Kunsthistorisches Museum? The Museum closes at 6:00. We had time for one or the other, but not both. We decided on the museum, mainly because the walk to the museum involved passing some stunning buildings. The Kunsthistorisches Museum (Museum of the History of Art) is visited by more than one and a half million people every year. The interior is incredible, and the collection is vast. I made sure we saw the highlights – Hunters in the Snow by Bruegel, The Artist’s Studio by Vermeer, and Portrait of the Infanta Margarita Teresa by Diego Velazquez – before they closed. By now we were ready to chill out, and so we went back to the hotel. We had no specific dinner plans, so we headed back toward the Opera house, and strolled the surrounding streets, choosing whatever restaurant that appealed to us. We found a really nice outdoor restaurant, and I tried tafelspitz, the national dish. This dish consists of slices of boiled beef with root vegetables, served with two dipping sauces (applesauce with horseradish, or sour cream and chive). Our last night in Vienna wouldn’t be complete without a visit to the Café Sacher, for a slice of their world famous Sachertorte, and a cup of hot chocolate.

Time to say so long, farewell, auf wiedersehen, good bye, to Vienna. By my watch, we’ll be in the Czech Republic in two hours.