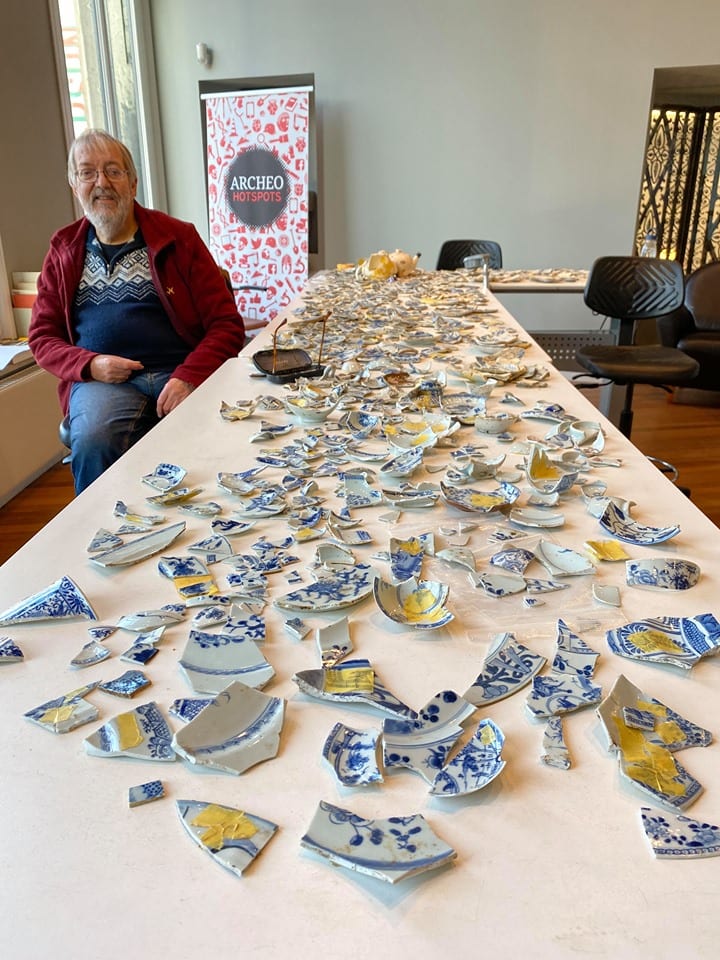 Piecing Together Pottery at the Allard Pierson Museum, Amsterdam

In March of last year, I visited the Allard Pierson Museum in Amsterdam.

I had purchased a MuseumCard which gave me access to a slew of museums in Amsterdam and elsewhere in the Netherlands, and I had been methodically going down the list and visiting each one.

The Allard Pierson is an archaeological museum with a permanent collection that contains Etruscan, Greek and Roman artifacts.

Some exhibits were okay, but in a city with strikingly fabulous museums like the Rijksmuseum, Van Gogh Museum, Stedelijk Museum and Rembrandt House, I guess I’ve gotten a bit spoiled.  I liked the Egyptian sarcophagus and the mummies, and the Hellenistic Cabinet was pretty nice.

During my visit, I stumbled upon a room that looked a little like a laboratory.  There was a long table in the room, covered with shards of pottery.

There were three guys sitting around, trying to put together the pieces in their original form, either a cup or plate or bowl or pitcher.

I looked around the room and one of the guys invited me in.  He explained to me that these pieces of pottery were discovered during excavation of a site not far from the museum.  Some type of housing was going to be erected on the site where they were excavating, and while they were readying the foundation, they came upon a trove of pottery shards from a few hundred years ago.  They’re not priceless, but they do give more information about Dutch life back in those days, and any reconstructed pieces have educational and historical value.

I chatted with the guys further.

All three guys I met are retired. I believe the four guys involved are Sam, Eugene, Frans, and Rick. They volunteer at the museum, sitting at the table trying to piece together the shards of pottery. The reconstruction of the pottery is the minor part of the job, however. Their real role is basically to be goodwill ambassadors for the museum, explaining about the artifacts and promoting the museum.  The best part of their job, though, is that they get to hang out with each other and just chat away all day! These guys have been friends for years, and what better way to spend your retirement than to hang out all afternoon with your buddies, laughing and telling stories while playing with pottery?

In the course of our conversation, I told them that I bought an apartment in Amsterdam and that I was taking Dutch lessons.  They thought that was pretty cool. They said that they are there every Tuesday and Thursday, and that I was welcome to join them whenever I’m in town.

A few months later, in August, I was back in town, and I stopped in.  I reminded them about our conversation back in March, and Sam remembered me right away.

We sat around chatting for a good two hours, exchanging stories about our lives.  I had a great time.

Five months later, I was back in Amsterdam, to take the next level of my Dutch language class.  I’ve been taking Dutch lessons, on and off, for about three years now. I missed last August’s classes because I had friends visiting me in Amsterdam, and I didn’t take classes during the previous winter school.  I figured that if I skipped this year’s winter school, I would feel so removed from the language that I’d never be able to get back into it. So I spent the past four months trying to get myself up to speed, before classes began.  The class schedule has turned out to be pretty intense, and my Tuesdays and Thursdays have been consumed with classes and homework. But I really wanted to pop in on the pottery guys once before I left. On my final Thursday in Amsterdam, my class didn’t start until 1:30, so I rode over on my bike to the museum at 11:00 to say hello.

Everything was different.  Soon after I had left Amsterdam last August, the museum underwent a big renovation.  Interestingly, they moved the pottery area into a large salon on the main floor, adjacent to the remodeled cafe.

There’s no need to actually gain entry to the museum; the pottery room is now part of the cafe and gift-shop area.  I went in, they remembered me right away.

I bought hot chocolate for the three of us, and we chatted like old friends.

We talked about my Dutch classes, and I read them a passage from the textbook that described important Dutch inventors and inventions.  Sam is a history buff already knew what I was describing, but he enjoyed hearing it again, and he said that my accent was pretty good. Before I knew it, it was 12:30 and I had to get going.

I will be back in Amsterdam in August, and you can be sure that I will stop by the museum again.  I want to see what changes they’ve made to the museum and the exhibits, and of course, I want to hang out with my fellow retirees once more.