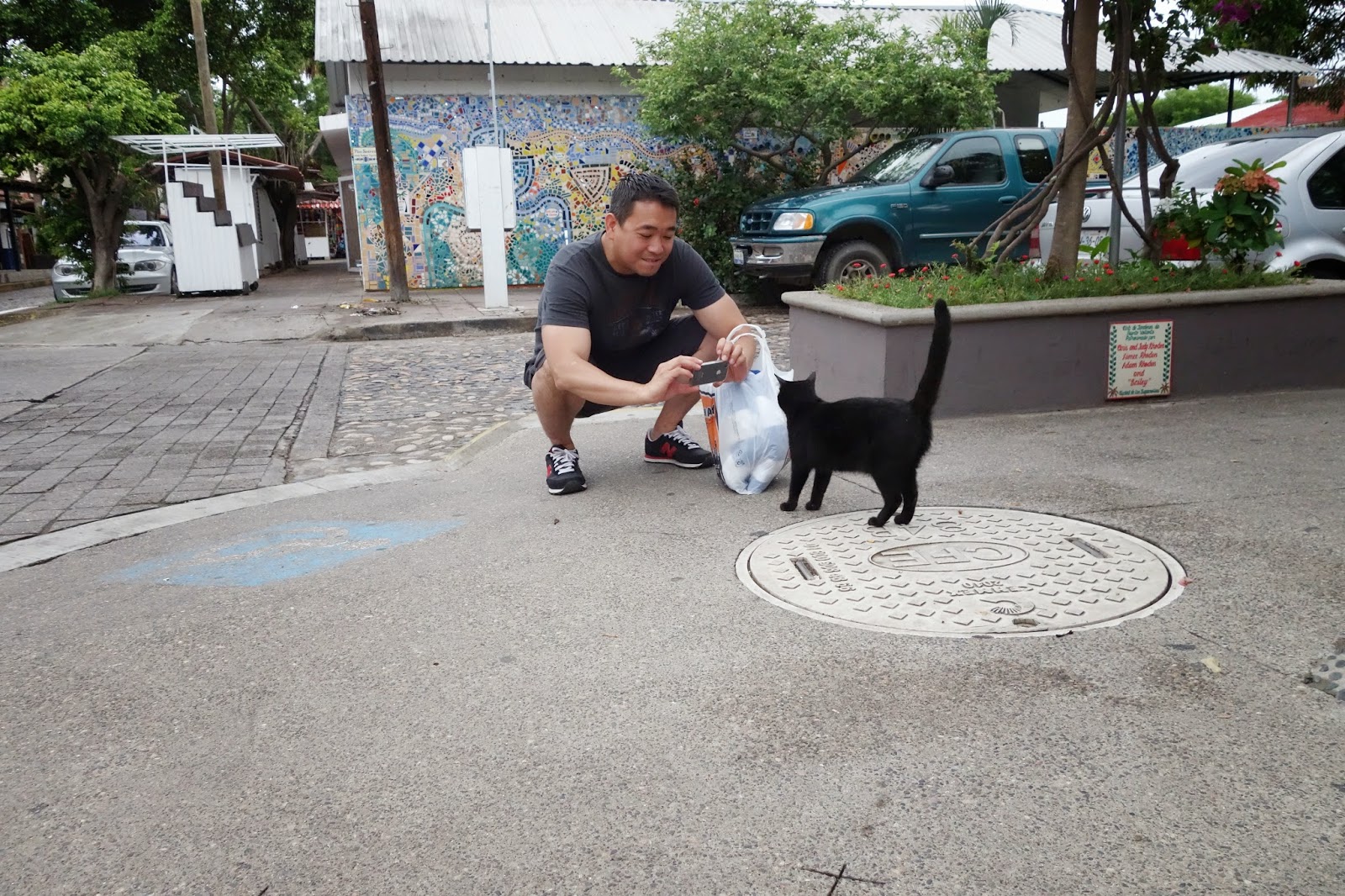 We had just gotten back from a ten day vacation to Morocco, so this seemed a little indulgent, but Mexico is inexpensive, and we hadn’t been to the beach in years.

After my Morocco trip and before this Mexico trip, I did take one more photography class, and the added instruction did make a difference.  So this blog post is more about photography than cats.

The cobblestone streets were charming.

I had read that Fredy’s Tucan was the best place for breakfast so we sought it out.

Nearby was Margarita Grill, which proudly proclaimed to have the best margaritas in town.

They had cats on the premises.

The black one let me pat her, while the calico looked on.

Inside was a longhaired black and white one, who I would end up feeding shrimp to at dinner two days later.

We crossed the street and checked out that fancy mosaic-tiled wall.

We made our way to the beach, despite it being overcast.   The “blue chairs”

There’s no idea how wide the beach might be, or how far back it goes. I like the way the color of water contrasts with the color of the sand.

The fluffy clouds, blue mountains, green water, white foam, tan sand, and the one lone kid enjoying it all.

We left the beach and did a little shopping.  At one store was an adorable puppy.

We strolled west along the malecon,

The barrier separating the beach from the walkway:

As we strolled further west, we wandered down a few less-touristy streets.  We passed by a place that really had me puzzled.  It wasn’t marked, so I have no idea what kind of facility it was at all. It had a white gate in front, with a mesh wire screen.  Inside were a bunch of cats.

They looked reasonably healthy.  Some of the photos are blurry because of the mesh screen.  A few cats had this weird red substance on their fur around their shoulders.

The cats looked clean and calm.

This one is clearly relaxed and chillin’.

Further down the street was a shop with another handsome cat inside.

Then we hit Vallarta Square, a little plaza surrounded by a mall and some shops.

People were relaxing, watching the pigeons.

From the plaza, you could see the beautiful church, called Our Lady of Guadalupe.

Sitting on top of the spire is the Crown of Our Lady, which was placed on the main tower in 1965.

The inside was pretty,

An excellent view of the beach and mountains.

I got this nice picture of the resort just next to the Blue Chairs, with colored umbrellas that look like they belonged in a cocktail.

We ate at Fajita Republic.  You can see, the food is pretty good lookin’.

But what was even better is that on the ledge above us, the restaurant cat decided to make an appearance.

I went over to say hi.

Another overcast day.  We woke up early and decided to go into town kinda early.  It was after sunrise, but still early.  I thought I’d get a few nice photos if possible.  I thought this was a nice morning shot

I tried increasing the shutter speed to get the individual droplets of water.  The sand in front is eerie.

For this shot of boats on the water, I used a camera setting where a narrow horizontal strip in the center of the picture was in focus, while the stuff above and below was blurred.  Interesting effect.

Then I tried the “watercolor” setting and took these two cool photos.  Looks like a watercolor painting indeed.

I used a filter that gave the picture a faded appearance, as if the photo was 40 years old and had been left on a table in the sun.

This one was taken with a filter that only recorded red.  Looks like colorized print from the ‘40s.  Love it.

My last beach picture of the morning was this one of the rocks and water, with this tree-covered cliff in the foreground and the blue-gray mountains in the background.  It felt like we were on a deserted island.

We ate breakfast, and then quickly headed back to the hotel, because today was the big day.  On the agenda:  zip lining!  In a fit of craziness, I signed Mark and I up for a jungle zip-lining adventure.  They drive you to the jungle and you put on a harness, grab a pulley handle, and zip through the jungle on 11 different zip lines.  Mark and I usually just keep to ourselves when we travel, but we saw that 8 others signed up for this, so it gave us an opportunity to meet other travelers.  We departed from our hotel at 10:45 a.m.  We were introduced to our fellow adventurers and immediately we all had a nice rapport.

When we arrived, they outfitted us with red bandannas, so that if we were to fall off a zip line and were lying dead or paralyzed on the ground, we’d be easier to spot.  How comforting.   Before you go, they give you some complimentary rum punch!

Then we were fitted with our harnesses.

Okay, we were ready!  Here’s the group

Okay, so I’m harnessed up, with my pulley, ready to rock.  That’s Abraham, one of the staff, making sure I’m safely hooked up.

The first two zip lines were kinda easy. But then, they throw you into a big one right away.  It was called “Tunel”, and was 600 meters long, and 170 meters high.

About 450 meters along the way, your zip line goes through a tunnel, which is kinda scary.  Here I am trying to withstand the g forces.
For the next zip line, I was given the option of going along in the “Superman” pose.  This line is high above the jungle.  Way high.  It’s terrifying.

When I was a kid, like all kids I tried to imagine what it must be like to fly, like a bird.  Everyone’s thought about it.  Well, for a good 20 seconds, I really got to experience, as close as I’ll probably ever get, what it must be like to be able to fly.  It was really amazing.  The excitement and the wonder overrode the terror. You can see by the look on my face how I was feeling.

The last line was called “Tom and Jerry”.  It was two lines, side by side, allowing two riders to race to the end.  I went alongside Mark, which was fun.

It really was a fantastic time.   After all that exertion, we paused afterward for a nice group meal.

On the premises was a macaw.  Strangely, I have a way with big birds, and this one flirted with me, and then let me scratch her head.

Some of the other folks were amazed that she let me do this.

We returned to the hotel and rested for a bit, and then headed back into town for dinner.   The margaritas we had at the zip lining place were great, and we were in the mood for more.  So we hit Margarita Grill, where they boldly proclaim that they have the best margarita in town.

I ordered a shrimp burrito, and I must’ve fed half of the shrimp to the cute black and white cat that I saw in the place yesterday!

After dinner, we moseyed on down to the beach to catch the beautiful sunset.  Beachgoers against the glowing water.

The sky was an amazing collection of yellows, oranges, greys and purples.

Back at the hotel that night, there was a party in the restaurant with great drink specials and some flamboyant entertainment.

Our last full day in Puerto Vallarta. Green chairs and some orange chairs.

Went back to the hotel, showered, rested, then went back out for a walk along the malecon to the very western part of town.  Mark likes to check out local supermarkets whenever we visit a foreign country.  He feels that they give a good idea of how the locals really live.  So we strolled west.  I saw this cute outdoor flea market in a pretty park across the road.

We then strolled back, along the water’s edge.

Further down was a little outdoor amphitheater, and there was a performance going on.

It was group after group of young girls doing a snappy little dance routine.

Here’s a minute-long video of the typical act that afternoon. The girls were cute and the crowd was enjoying it.

We continued further up the beach, where it was quiet and serene.

Although it was overcast for much of the trip, the zip lining adventure, and the amazing sunsets made the trip really wonderful.