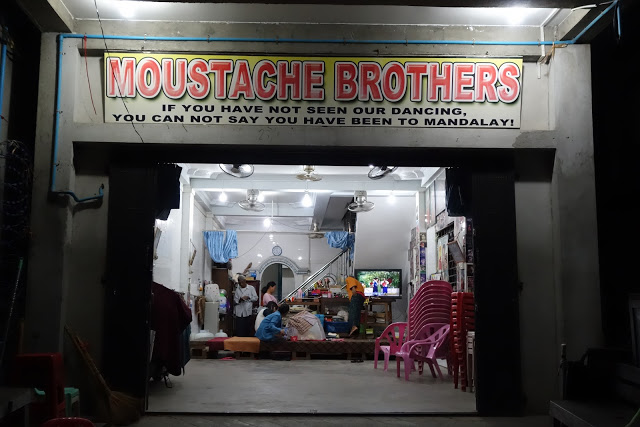 My Trip to Burma: The famous Moustache Brothers. No trip to Mandalay is complete without a visit here.

March 13, 2016 Arnold Plotnick
After an amazing day, jam-packed day, we went back to the hotel, chilled out a bit, and then grabbed a cab to see the Moustache Brothers.  If you don’t know they’re story, you’re in for a treat.

The Moustache Brothers are a daring group of performers. Active for more than three decades, these guys continue to do something quite risky every single night: they criticize the regime in Myanmar. This has not been without personal risk.

During an Independence Day event in 1996, the three brothers performed at Aung San Suu Kyi’s compound in Yangon.  In front of more than a thousand of her supporters, two of the performers (Par Par Lay and Lu Zaw) entertained the crowd with the following lines: “Everybody starving except for the government. They love to take things. So when you are in Burma, please don’t steal – the government doesn’t like competition.”  Compared to what we’re used to – Steven Colbert and Jon Stewart – this was pretty tame political satire.  Not in Burma, though. After the show, Par Par Lay and Lu Zaw were arrested and sentenced to seven years of hard labor, and were forbidden to perform publicly in Myanmar. 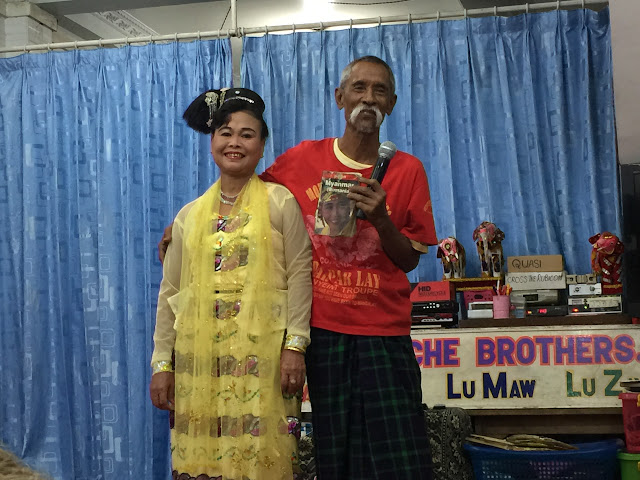 At the time of their arrest, the Moustache Brothers were already so well known as advocates for free speech that an international outcry occurred, with rights groups and American entertainers Bill Maher and Rob Reiner leading the chorus.  A petition by cosmetics retailer The Body Shoppe produced three million signatures.  Partly as a result of these efforts, the sentence was commuted to five years and seven months. 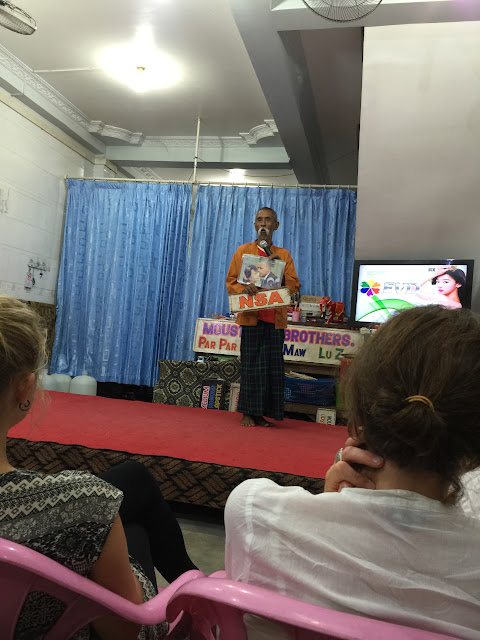 Undeterred, they rejoined the third member of their troupe, Lu Maw, in 2001 and resumed their show.  How do they get away with it?  Well, political satire is prohibited from being performed publicly, so they performed it at their Mandalay home instead. When the government then decreed that they weren’t allowed to perform there either, they decided to do the same act without costumes or makeup, since it then could not be called a “show”.  Somehow, this ruse worked, and they’ve been performing ever since. At first, police officers were stationed outside the house, but the tourists and journalists continued coming. In fact, it was probably the presence of so many foreigners in the audience that deterred the authorities from cracking down again. The police are now no longer deployed here.  Seven nights a week, from their home garage, for gatherings of as many as 40 foreigners, they perform their shtick. The cost: 10,000 kyat.  That’s about $8.25.  The night I went, there were 14 people in the audience. Sadly, Par Par Lay, the leader of the group, died in 2013 at the age of 67. Mr. Par Par Lay was a pro-democracy activist and an avid supporter of Aung San Suu Kyi, whose NLD just won a landslide victory in the election..  He was a participant in the violent nationwide uprising in favor of  democracy in 1988. Although the cause of death was never determined, Lu Maw blames a kidney infection caused by years of drinking lead contaminated water at two prison camps in northern Myanmar. 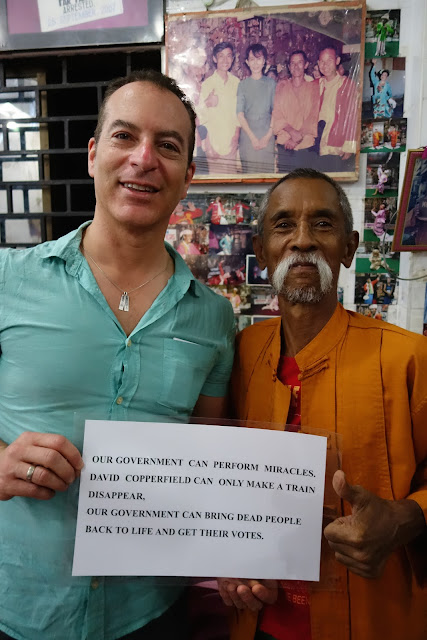 The two remaining performers, Lu Zaw and Lu Maw, have carried on.  On the way back to our hotel after a day of sightseeing, we detoured to their home-slash-performance space to get tickets for tonight’s performance.  We were immediately greeted by Lu Maw, who handed me a laminated sheet with a subversive, anti-government joke!  He asked where I was from, and I said the U.S, and he said he liked our president.  I asked if I could take a photo with him, and he said yes of course, but steered me over to a spot in the garage so that above our heads is a photo of him with The Lady.  Lu Maw adores Aung San Suu Kyi and everything she stands for.  He mentions her, and President Obama, several times during the performance.


I bought two t-shirts (now prized possessions), and told him I’d see him later.       The rest of the troupe consists of the performers’ wives, and five other relatives.  Their determination to continue defying the government is partly a tribute to Mr. Par Par Lay, and these days they still perform an updated version of the very jokes that he created and that got him into such trouble. Despite his fame and the fact that he meets curious foreigners every single day, Lu Maw (the only one who speaks English) still enjoys chatting with whoever pops by during the day.  Lu Zaw and Lu Maw consider their work a calling and they plan to continue doing it for the rest of their lives. My respect for these guys knows no bounds.  I was happy to pay the admission ticket to the show, and I purchased two t-shirts, which I consider my best souvenirs from Burma.

Below are scenes from the show.  Admittedly, it’s not the funniest show in the world, and the stage production and sound system are primitive. Still, there’s a message behind the comedy, and I was happy to support it. 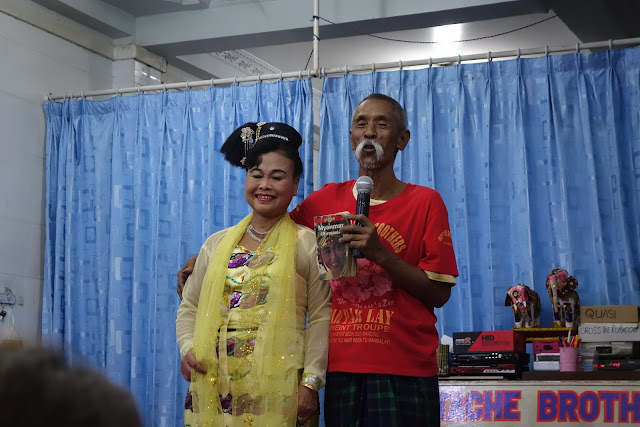 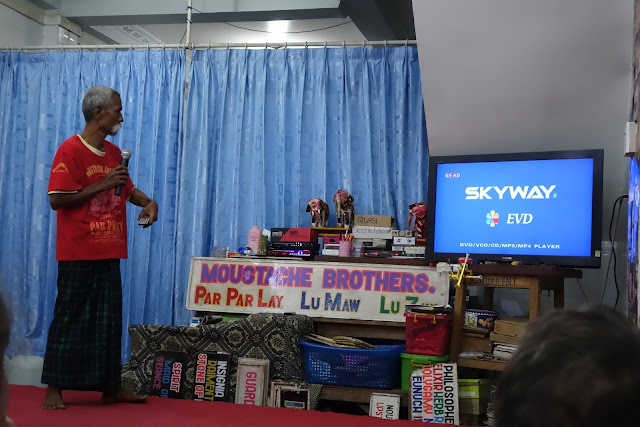 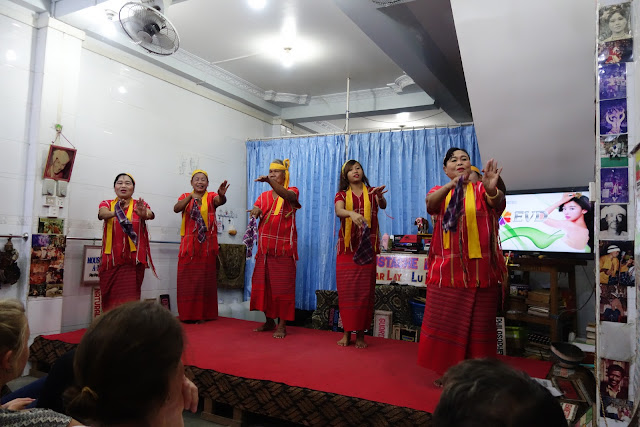 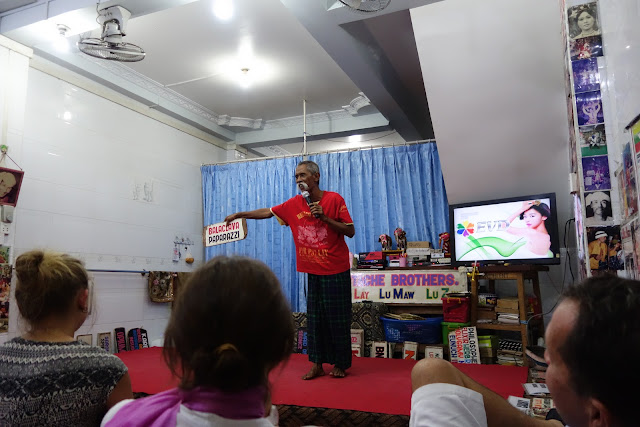 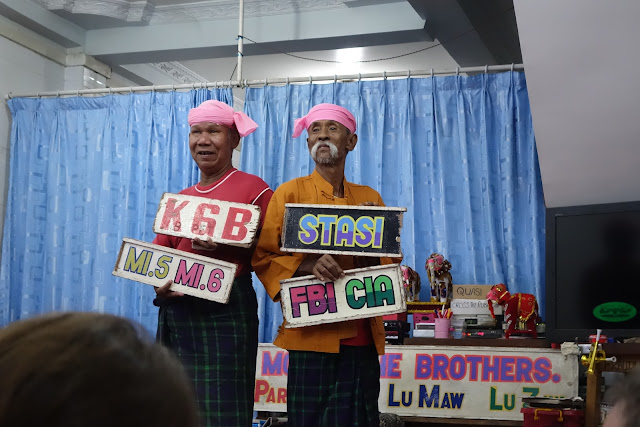