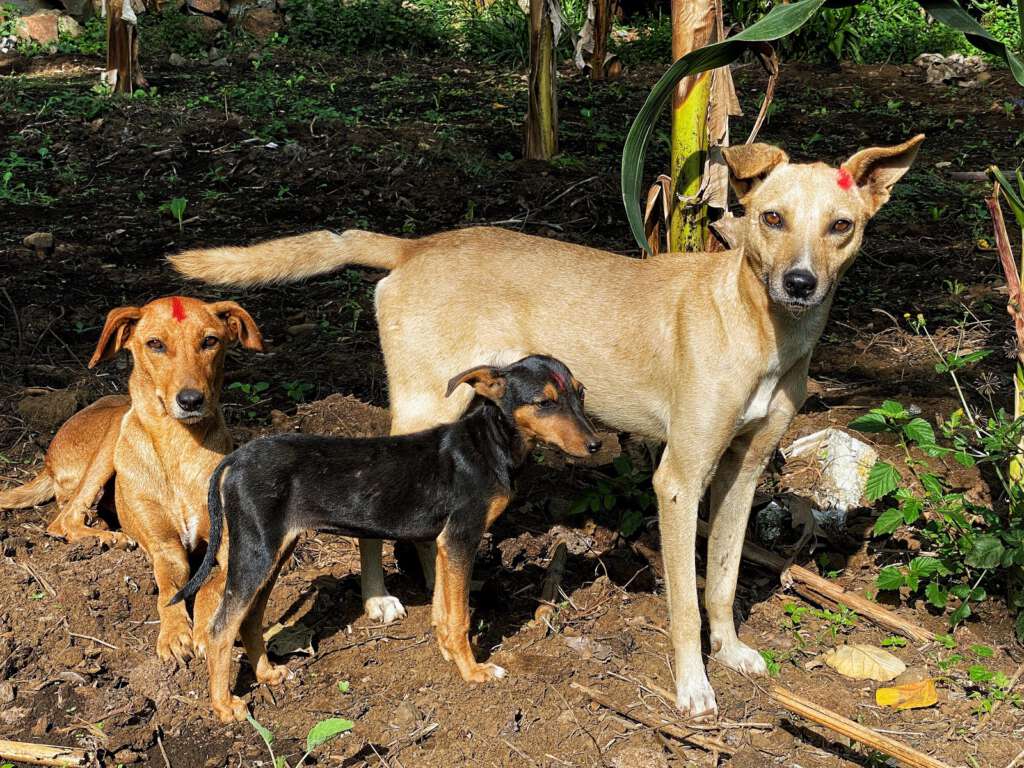 Mission Rabies Tanzania – Day 11, This Vaccination Drive is Coming to a End. Pt14

Great day today.  We were roaming again, in an area called Singisi.  It’s a pretty area, with lots of lush green foliage.  Many interesting pathways and homes.  Courtnie had to get her pre-flight Covid test this morning, along with several other volunteers who are flying to the UK on Thursday, so I was by myself in the morning.  I had no idea if it was going to be a busy day or a slow day.  It turned out to be pretty busy, so I had to do the vaccinating as well as entering the owner’s info in the phone app.  Not a big deal, just tedious. The questionnaire on the app has a lot of entries to fill.  The pace was pretty steady.  We’d drive around for a bit making our announcement, and then we’d see someone off in the distance coming toward our truck with a dog and we’d stop to vaccinate it.  Once we were parked, other dog and cat owners would start appearing.  It tended to go that way all day.  We vaccinated around 40 dogs and cats before Courtnie was able to join us.

As usual, there were a lot of kids around, and we acquired a little fanclub of sorts.  Kids followed our truck everywhere we went.

Once we were stopped, Courtnie and I found ways to entertain them.  We would take their photo and then show it to them, which always elicited a smile.  I’m not sure how many of these kids have ever seen an iPhone or have had their picture taken, let alone have it shown to them right afterward.   It was all a lot of fun.

Today was also a good day from a photographer’s perspective.  Lots of opportunities for cool shots.  For example, I saw this kid crouched on the ground near a building.  The color photo was okay, but I thought it would look better in black and white, and it does.  I cropped it and increased the contrast a bit. It looks timeless, like it could have been taken in the 1930s or 1940s.

I also got some great pictures of kids.

One of my favorites is this action shot of a kid running down the road hitting a wheel.  I think I composed it pretty well, and I like the black and white version better. I used “leading lines”, namely, the road, to lead your eyes.   Having the kid in the foreground works well, as you’re basically seeing things from his perspective.  And the dog works, too.  The fact that he’s only halfway in the picture suggests he walked right into the photo, giving the picture more of a sense of action.  Anyway, it’s one of my faves.

A few more cool pics from today: this girl holding her cat.

This boy lovingly holding his sister.

This contemplative boy in the woods.

And these kids waving goodbye as we drove away.

The day ended well.  We vaccinated 103 animals today.  Probably 95 dogs and 8 cats, if I had to guess.  According to Lucy, in the four years that she’s been doing this project, they had never vaccinated more than 100 dogs in this area, so 103 is an impressive number, she says.

Of course, we couldn’t end the day without getting stuck in the mud once more.  Last time I helped push the truck and got sprayed with mud (thought not as bad as Courtnie), and I strained my back a little.  This time, I stood back and watched the younger, stronger folks push the truck.

Tonight I’ll do a little packing.  Tomorrow is the last day of the project.  Hard to believe it has gone by so fast.  The day after tomorrow, we fly out of Kilimanjaro, to Zanzibar!