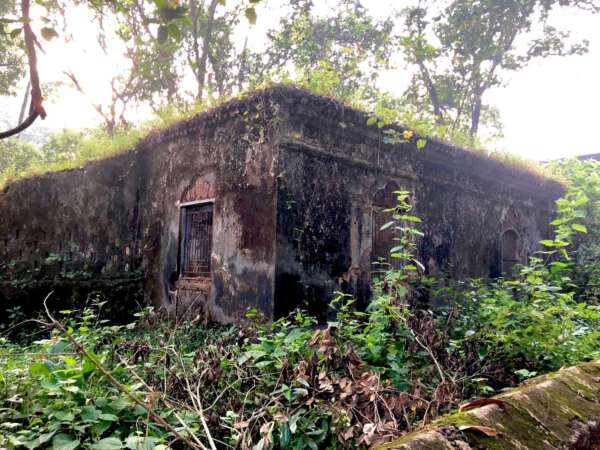 Yes, I already did a post about the scenery in Goa, but I guess I just can’t help myself. There’s so much to see.  Walking up and down the streets and alleys of Goa really made an impression. There were so many quiet leafy paths, and so much interesting architecture.  I’d see shacks and sheds that appear to have been abandoned for years, now surrounded by overgrown grass and plants, and they’re just beautiful, in their own humble way.  Maybe I’m crazy, but these silly things had me enthralled, and even though we were on a mission to find and vaccinate dogs, I never took for granted the natural beauty of this city.

For example, the building below.  We didn’t find any dogs here, but check out the building.  The crumbling walls, the broken windows, the colors… all those shades of black and gray and tan and pink, surrounded by the greenery.  There’s a lot of character in this old crumbling building.

The majority of the people in India are Hindu (about 80%), followed by Muslim (15%).  Christianity accounts for a little less than 2% of the population. In Goa, however, about 25% of the population are Christian, consisting almost entirely of Roman Catholic.  After the Portuguese Conquest of Goa in 1510, Goa’s indigenous population underwent a major conversion to Christianity. In many of the houses we visited, there were crucifixes and images of the Virgin Mary.  Many homes had Christian symbols outside, as part of the architecture, like this cross below.

This building, off in some yard somewhere, surrounded by boulders and covered with vines, caught my eye right away.  Not knowing how old it was or what it was used for just adds to the mysterious beauty.

This old stone fence might seem kind of boring at first glance, but the plants and moss growing on it give it such strength and character.

The storage buildings below never failed to fascinate me. How old are they?  What were they originally used for? I’d love to know.

This building, with the interesting grates in the windows, the intricate molding around the roof, and the weather beaten look, had me mesmerized.

Check out these steps!  So enchanting, as if out of a fairy tale.

I have no idea what this structure below might be.  It looks like the last remaining wall of a building that long ago began to disintegrate.

This old weathered church, with the pinks and the blues, was pretty striking.

The steps below look more modern than those in some of the previous photos, but constant exposure to the elements gave it a beautiful antiquated look amongst the water-stained concrete and the stately pillars.

This neglected bicycle against this old wall, to me, is like a picture postcard.  That new leather seat is definitely out of place.

Wow.  Check out this abandoned building below, behind this amazing fence.  I think this must have been some kind of estate in the past, as I could see other, larger buildings behind this one.  Unfortunately, there was no time to stop and explore.

Paths and yards also had me intrigued.  As I’ve said before, I live in Manhattan and I am a city boy through and through.  These simple visions of rural scenery were so pleasant to witness. I loved walking down these lush paths and climbing up steps and small hills.

Some of these yards were in disarray, but if they were mine, I don’t think I’d change a thing.

I’ll end this post with these three lovely paths.  In the next post, I’ll give my readers what I know they really want.  Dogs, dogs, and more dogs!