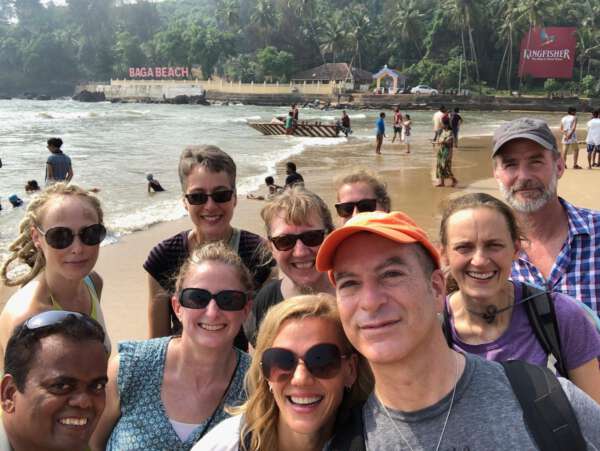 Mission Rabies Goa – Chapter 7: Orientation, and then… the Beach!

I woke up refreshed this morning, despite having a difficult time falling asleep last night.  I had taken a nap before dinner, and after dinner I just wasn’t tired.  Eventually, Satan’s aspirin (i.e. Ambien) did the trick.   I lumbered downstairs and headed over to the restaurant for breakfast with my fellow volunteers.  The non-Indian fare was pretty nondescript: slices of white bread (no toaster), some jam, and some butter.  There were slices of papaya, and a few small Asian bananas.  There was an Indian dish offered, too.  It was whole chick peas in a curry sauce, that you ate with roti.  It was very good.  I had two portions.

After breakfast, we headed back to the lobby of our villa for orientation. The couches and chairs were arranged in a semi-circle, around a screen.

Amy presented a slide show that covered everything.  We reviewed the disease rabies, talked about the Mission Rabies organization, and then went into the logistics of what we’ll be doing tomorrow.

Every team has a team leader who we haven’t met yet, two local animal handlers, and two volunteers from our group.  I thought each team would have three volunteers – a vaccinator, a painter, and a data recorder, but I was mistaken.  There will be two volunteers from our group on each team, and each volunteer will be cross-trained so that they can do all of the tasks.  This should make the position more interesting. We discussed how to draw up the vaccines, how to put together the kit for the next day, how to minimize getting ill (dehydration, heat stroke, snake bites), and how to minimize our risk of rabies.  At the end of the two-hour orientation, we were given our bright yellow, easy-to-spot Mission Rabies shirts (two per volunteer) and a Mission Rabies wristband, and we headed over to the restaurant for lunch.

Lunch consisted of a dish I was unfamiliar with: idli, which are difficult to describe.  They’re not really small round breads, but they’re not really muffins or pancakes, either.  They have an odd consistency, similar to polenta, in my opinion.

It was served with some kind of curry that you either dip the idli into, or you pour the curry over it.  The idli themselves are pretty bland, but coupled with the curry, it was pretty tasty.

It’s the northernmost beach in North Goa.  From there, we would leisurely stroll south along the coast, hitting Calangute beach, but probably not as far south as Candolim beach.  A stroll like that takes a few hours, and it was already around 3:00.  It starts getting dark around 6:30, and dinner is at 7:30, so we’d have to head back around 6:00 in order to have enough time for a mandatory shower (we were sweating like mad) before dinner.     There were 12 of us, and we took two large cabs/vans, each holding six of us.  It took about 15 minutes to get there.  The driver dropped us off at the entrance to Baga Beach.  There were a lot of typical resort-type shops selling t-shirts, bathing suits, hats, trinkets, etc.

As soon as we parked the cab, there was a dark Indian woman holding up several necklaces standing there, asking us if we wanted to purchase her jewelry, literally before our feet touched the ground.    We strolled past dozens of people, nearly all locals, as we made our way onto the beach.  Immediately we were greeted by a super-friendly beach dog.

We surveyed the festive scene and took some group selfies.

We then leisurely strolled along the coast, where the water met the sand, and absorbed the essence of Goa: the sun, the crowds, the kids digging holes and building sand castles, and gathered on lounge chairs absorbing the rays of the sun.

There were young guys everywhere, hustling anyone who looked like a tourist with pleas to come to their beach club to eat, to rent a chair, or to have a drink.  They were all pretty friendly, a few more insistent than the others, but always respectful and with a smile. We politely declined and continued to stroll south, enjoying the sun, engaging the friendly dogs, and marveling at the occasional cow sunning itself on the beach as if it was a tourist on vacation.

We eventually stopped at a beach bar and sat around drinking wine (Dawn and Claudia), beer (Alyssa), and a banana lassi (me).

There were dogs all over the beach and they were all so cute.

This scruffy-faced one was particularly friendly with Dawn and Alyssa.

Claudia got a little doggie action, too, as did Helen.

After that, we did some souvenir shopping along the main tourist drag before catching a cab back to the hotel.

While out shopping, I attracted a different kind of dog.

We finally headed back to the hotel and had another tasty Indian dinner, and then back to our respective rooms to mentally prepare for Day 1.  Earlier in the day, I found out that my team leader was a local animal handler named Frank, and that my other teammate was going to be Alyssa (yay!).  Our team name is “The Leopards”.  Let’s see how many dogs The Leopards are going to vaccinate tomorrow.