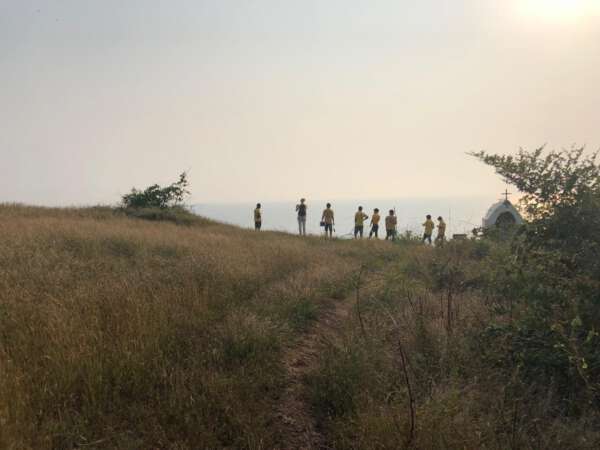 All good things eventually must come to an end, and that includes this incredible adventure.  The vaccinating and caring for the animals goes on all year, but these Mission Rabies volunteer projects are only two weeks long, and the last day had (all too quickly) arrived.

We gathered at the reception area in the morning as usual, and rolled out with the trucks for the final time.

There was definitely a different atmosphere.  It was a light-hearted day. The morning was spent chasing down dogs at the beach, which was a nice way to spend the final day.

After that came breakfast.  We went to a pretty sizeable roadside café, where we ran into one of the other teams.  The food was great, and the atmosphere was pretty festive. Much of the time was spent taking photos.

There was a vertical pole nearby, and I showed everyone my gymnastic trick, where I can grasp the pole and hold my body perpendicular to it.  A local resident insisted that I do it again so he could get a picture with me. A few of the boys tried to do it, but couldn’t, and they were impressed that an old guy like me could do this. I may be 58, but I ain’t over the hill just yet.

We went back to the beach, caught a few more dogs, and then took more photos.  I think it was no coincidence that Frank took us to the most scenic beach for our last day.  It was a perfect spot for photos.

We took some silly photos, like this one of me capturing Alyssa in a net.

The boys were definitely the masters of the nets, but on the last day, they let us pose holding them.

During the first week of this project, the animal handlers were a bit shy and they mostly kept to themselves.  But when you spend every day together, you can’t help but become friends, and you can see from these pictures that we became a close-knit group.

We went back to the hotel for lunch, and there was a celebration and an award ceremony.

The volunteer teams during the two weeks before us had vaccinated 5000, and our group vaccinated 6000.

We all received a photo of the whole group, and a coffee mug with that same photo on it.

Jo Bailey works for Mission Rabies.  She lives in Malawi (!) and oversees the projects that go on there.  She was with us for the Goa project. She received recognition for her hard work.  I recently found out that she’ll be on the Ghana vaccination drive in February. She’s super nice and I’m psyched that I get to work with her again.

Our team, the Leopards, did okay, but it was Lynel and Dawn’s team, the Camels, that really kicked some serious butt.  Here they are getting the award for the team with the most dogs vaccinated.


The two weeks spent on this project were the most interesting, exciting, and rewarding two weeks of my life.  People tend to overuse the phrase “life-changing”, and I hesitated at first, out of fear of sounding cliché, but I can’t deny it. It was a game changer for me. I met some truly wonderful people and formed lasting friendships.

In 2014, there were 17 human deaths from rabies in Goa. That year, Mission Rabies began their Goa project, and the number of rabies deaths have decreased steadily every year. When our mission concluded at the end of October, there had been no deaths from rabies so far. Well, there were no deaths in November or December. Zero deaths for the year 2018.  It’s an amazing accomplishment. This program is making a difference in the lives of many people, and I’m proud to have been a part it. In a few months, I get to do it all again, in Ghana. You can be sure that I’ll have my camera ready and will be blogging all about it.