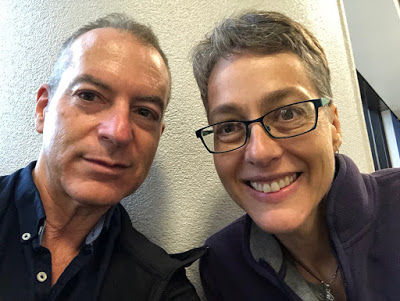 I am on the airplane now, composing this blog post on my new Chromebook. I’ve never written a blog post (or anything, for that matter) on an airplane.  Pretty neat.

Yesterday, I purchased a selfie stick.  I went for one with a wire, rather than a bluetooth one.  One less device I have to charge.  Well, last night I thought I’d test it out, and it turned out to be defective.  The piece that holds the phone did not screw into the stick properly.  Very frustrating. I had thrown the receipt in the trash, and Mark had tossed egg shells and some old vegetables in the trash, and I had to root through that nasty garbage to find the receipt.  But I found it, and after my haircut, I exchanged the defective selfie stick for a new one. I made sure to test it out before leaving the store.  This particular Best Buy was just a block away from The Strand, one of my favorite book stores, and I couldn’t resist popping by.  I came very close to buying a used copy of Richard Lloyd’s autobiography (he’s the guitarist from the band Television, whose classic album, Marquee Moon, is one of my all time faves), but I resisted.  I’ll wait for the paperback, and then maybe buy it on Amazon.

I was going to walk home, but I got lazy and took the subway from Union Square to 28th Street.  It was almost 11:00, and I was thinking about lunch, so I popped into Sunsweet Market and bought a hero sandwich and a container of chocolate pudding, which I had been craving for days.   I went home, finished the laundry, ate lunch (I could have eaten three of those puddings), and then tried to take a nap, knowing that I can’t really sleep on an airplane.  As soon as I got into bed, Glitter jumped on the bed and was aggressively lookin’ for some lovin’.  I patted her and fawned over her, and she purred up a storm before settling down next to me.  We napped for about an hour and a half.

Jessie Foley from Mission Rabies set up a WhatsApp group about two weeks ago, to make communication between team members easier.  Because of hurricane Michael, there was some concern about air travel.  As we were all trading messages, it became apparent that four of us were on the same flight to Mumbai!  This was a great relief to me.  Given that my last few flights were fraught with problems, I’d become paranoid about delays and cancellations, and with the storms predicted for this afternoon, I envisioned myself stranded in Newark, frantically trying to rebook my cancelled flight.  Knowing that there were four of us on the same flight, I felt that there was safety in numbers.

I was planning on leaving my apartment for Penn Station at 4:30, to catch a 5:00 train to Newark International Airport, but I was dressed, packed, and ready to leave at 4:00.  So after playing with the cats for ten minutes, I left the apartment a bit early.  It was raining pretty badly, but the walk to Penn Station  was only four blocks. I got there quickly, and just made it on to the crowded 4:30 train.

United’s check-in process is pretty unpleasant.  At Newark, at least.  If you’re a business or first class passenger, you’re treated like royalty.  If you’re flying economy, the area where you check in is in a dark, unfriendly corner, where everything is done by kiosk. I went to a kiosk to get my boarding pass, but I was interrupted midway through the process, with the screen instructing me to flag down a United representative.  I found one hovering in the area.  I had to show her my valid visa for entry into India. She inspected it, typed something into the computer at the kiosk, and I was able to get my boarding pass.

I headed to the dreaded security gate.  My suitcase and backpack were filled with many lotions and potions, some of which exceeded the 3 oz. limit.  In addition, I had all sorts of cables and chargers and plug adaptors, and I figured there was no way I was going to get through security without being flagged.  Well, thank goodness for TSA precheck.  I breezed through security and made my way to my gate.  I then received a WhatsApp message from Claudia, a fellow veterinarian and Mission Rabies teammate.  She was already at the gate, sitting in the corner.  I arrived at the gate, spotted her, and went over and introduced myself.  We soon received messages from Dawn and Alyssa, the two other participants on this same flight.  They work for Brief Media, one of the sponsors of the mission.  Their initial flights had landed at Newark, and they would be joining us momentarily.   A few minutes later, they showed up.  I fully expected the other teammates to be really nice, given that we’re all animal lovers and all feel the same way about helping the people of India with this rabies problem.  I wasn’t disappointed. Everyone was super-friendly and we quickly bonded.  We decided to grab some food before the flight (I had already eaten, so I just grabbed a drink), and we chatted away until our flight was ready to board.  Despite the weather, our flight left on time.  What a relief.

I was considering paying for an upgrade to Economy Plus, which gives you five additional inches of legroom, but it was an additional $219, and the only ones available were middle seats, so I declined.  I asked if they had any exit row seats that I could switch to, and they did, but it was an aisle seat, and considering that this was a 15-hour overnight flight, I wanted a window seat, so I’d have a wall to lean against in any feeble attempt to get some sleep, something I find impossible to do on an airplane.

Our flight was scheduled to depart at 8:15 p.m.  We lifted off at 8:35, which was pretty decent.  The pilot announced that we would be arriving in Mumbai about 20 minutes early, also a nice surprise (assuming that this stays true).   Once we got underway, it wasn’t long before dinner was served.  Although this is a flight to India, it’s a United flight, not an Air India flight, and I wasn’t expecting an Indian-inflected meal, but that’ what we got, and it was interesting (and pretty tasty).  The entree wasn’t particularly Indian: four-cheese orzo with spinach and tomatoes, but the side dishes weren’t your standard fare.  It was a little cup of pitted black olives, and a small dessert cup containing something called rasmalai.  I thought it was rice pudding, but it was actually two chunks of paneer cheese in a sweet flavored milk, with almonds, pistachios and cardamom. It was great.  They also served tiny little container that said “pickled vegetables”. I didn’t see how they could fit actualy vegetables in a container the size of a pat of butter.  It turned out to be some kind of spread, presumably for the bread roll.  I tried some, and it was pretty spicy. Not hot-spicy, but flavorful-spicy.  All in all, the meal was great.  They then served drinks, and when I asked for a diet coke, the flight attendant gave me the entire can, rather than just pouring me a cup.  Love when that happens.   So far, on this flight, I’ve drunk two 20-ounce diet Snapples, a 12-oz can of coke, and a glass of water, and I still don’t have to pee, after 8 ½ hours.  I guess these flights really do dehydrate you, like they say.

I read two magazines and about 40 pages of my book (“I Can’t Breathe: A Killing on Bay Street” by Matt Taibbi, about the death of Eric Garner, the black guy from Staten Island who was arrested for selling loose cigarettes, was put in a choke hold by the police, and died as a result.  Excellent but disturbing book), and then tried to get some sleep.  My Ostrich lite travel pillow is the best travel pillow I’ve ever used, but I still wasn’t able to get any actual real sleep. I simply cannot sleep in a chair.

I’ve been listening to music for the past hour.  They say that the music that you listened to in high school remains your music of choice throughout your life, and that has been mostly true for this flight.  While the rest of the plane sleeps, I’ve been rocking out to Bowie, the Velvet Underground, Bob Dylan, The Clash, Pink Floyd (early Syd Barrett stuff), Talking Heads, and Wire.  It’s 4:55 a.m., New York time.  Eight hours in the air.  Six more to go. Can I go the entire flight without urinating?  That’s the question, isn’t it?

One-hour and forty-five minutes until we land. About three hours ago, the girl in the middle seat got up to use the bathroom, so I decided to do the same, to keep the disturbances to a minimum.  The flight attendants gave out a snack a few hours ago.  Even the snack had a bit of Indian flair: a little bread roll with apricot chai cream cheese, and a tiny bag of m&m’s.  Although I was pretty tired, I decided to check out the in-flight entertainment.  The movies were pretty current, but being a MoviePass maven, I’d seen nearly all fo the ones that I had wanted to see.  I did find one that I missed, though:  All the Money in the World, the film about the kidnapping of J. Paul Getty’s grandson, and how, despite being the richest man in the world, he held off paying the ransom until the kidnappers cut off his grandson’s ear.  Excellent movie, and it helped two hours pass by.  I just finished reading the latest issue of Out.  I also ate two Kind bars.  I’m starving.  They still haven’t turned on the cabin lights, even though we’re 90 minutes from landing. I hope they serve breakfast soon.  This is the longest non-stop flight I’ve ever been on.  I don’t know how my fellow Mission Rabies travelers can withstand a five hour layover in Mumbai after a flight like this.  They admitted that my itinerary, i.e. staying overnight in Mumbai and flying to Goa the next day, was probably the better way to do it.  Especially since there’s nothing pressing to do on Saturday in Goa.  Sunday is the first official day, where we have orientation.  I hope the orientation isn’t an all day affair.  It would be nice to go into the town and see some sights.

Cabin lights just came on.  Next post will hopefully be from my hotel room in Mumbai, or better yet, from the poolside at our hotel in Goa!