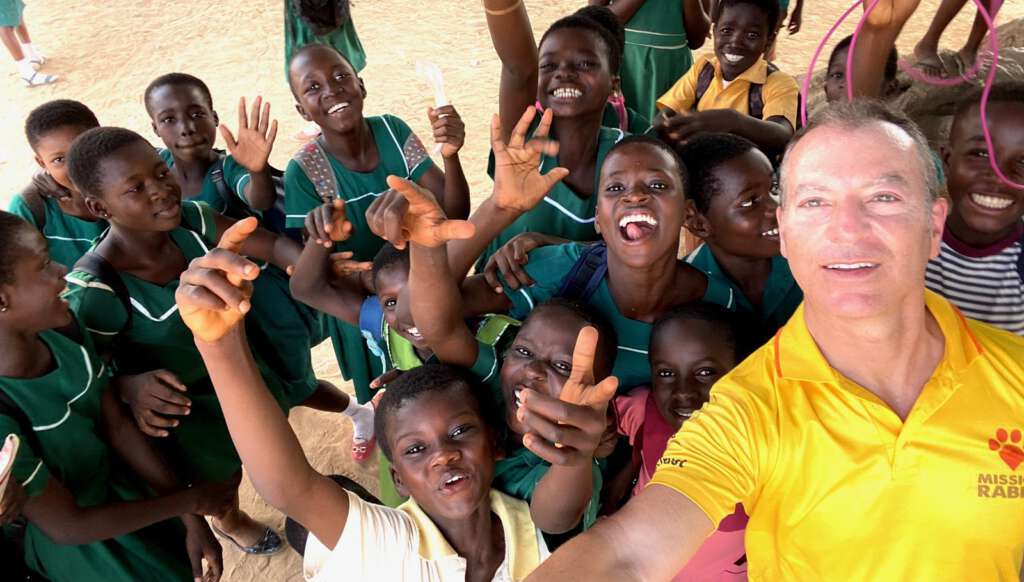 After meeting at the base camp, we packed our bags and headed out fully stocked. Again we detoured at the little market, and I got to see Avocado Lady again. It’s my morning ritual.

Today was a strange day.  I was initially told that our group would be heading back to the static point clinic that we operated on Tuesday, before the day got cut short.  We saw quite a few dogs in a short period of time. When we headed to that area, though, a funeral was taking place right in that area, and it would have been difficult (and disrespectful) to operate a vaccination clinic there.

So we went door to door instead. The area we serviced today was called Abuontem.

The first home we went to did have a dog there.  It was a 120-pound Rottweiler named Achilles, and he was all muscle.  He seemed friendly, but also very protective of the wispy 100-pound woman who was trying to restrain him.  I let him smell my hand, and he was curious and friendly, but boisterous. As I went around him to try to approach him from behind, he lunged at me and bit my left upper arm.  It wasn’t a vicious, deep nasty bite; it was just a little nip. His upper incisors scraped my skin, and one canine did sink into my flesh a bit and made a hole. Although it was a pretty small hole, blood came pouring out of it.  It didn’t hurt, and I felt totally fine. I went inside the home of the woman who owned the dog and did what we were instructed to do: wash the wound immediately with soap and water for a full 15 minutes. Every group has a first aid kit, and I got ours out, and Adusei applied a bandage to it.

In a few minutes, however, blood seeped through the bandage, so I found another bandage and put that on, and that worked pretty well.

We went to a school to speak to someone about setting up a static clinic here later in the day. While we were there, I checked out some of the classrooms.

There were “Speak English” signs everywhere, and one classroom had computers (old ones, but still) on every desk.

On a white board up front, there were instructions about how to use the keyboard.

There were also some notebooks belonging to some of the students, and I looked through some of them.  Everything was in English.

We left the school and continued on our vaccination mission.  This area seemed pretty poor, although there were some homes that were definitely middle class.  At one home, there was a cross-shaped wooden stake in the ground, and when the owner’s son leaned against it, I thought it made for a great picture.

I really can’t get used to the landscape here.  Some homes are simple, suburban homes. Others are homes with a lot of land that serves as a kind of farmland, with animals of all stripes running around.

Some other places just seem to pop up out of nowhere, in the midst of piles of trash and rubble.

You couldn’t pick a terrain more different from the way I live now, or could ever imagine living, and it really puts so many things about my life into perspective.

About an hour and a half later, II could see blood pooling beneath my second arm bandage, so we went to one of the local community clinics for another bandage change.  Visiting a community health center in Abuontem, Ghana was an experience in itself. They applied a good bandage, and I was on my way. But first, I had to pee, so I asked the woman at the clinic where there was a bathroom.  She looked a little distressed at this request, and led me to some nearby building where some guys were sitting around, and asked where there was a washroom. They said they didn’t really know. I said to the woman, a little flabbergasted, “what do people do when they have to urinate around here?” and she said, “oh, you just have to urinate?”  I said yeah, and she said oh, that is no problem. “When people have to poo-poo, it’s not easy to find a place. But if you have to urinate, it is easier.” No kidding, this is what she said. As for where to urinate, she took me around the back of the building, pointed to the landscape of rocks and rubble, and said, “just go anywhere”. Again, I’m serious.  There was a pile of bricks a few feet away, and I urinated on the bricks. Then I went back to our truck, and off we went, to vaccinate some more dogs.

I prefer the static point clinics over the roaming static clinics for a few reasons.  The main one is that I feel like we see more dogs there. I don’t know what the numbers show, but whenever we were doing static point clinics, it seemed like the people just kept on coming, while with the roaming clinics, it felt like we were spending more of our time driving, and not much vaccinating.  There are other reasons why I don’t like being in the truck that much. First of all, there’s so much stuff in that back seat that I always feel cramped back there, even with only two people back there, and most of the time, we’ve had three people crammed in the back. Another reason why I don’t like being in the truck is that the driver tends to play a radio station that features a preacher angrily yelling fire and brimstone at the top of his lungs.  I should be thankful that it’s in a language I don’t understand. The other folks in the truck totally ignore it, but I can’t, because the guy is literally yelling, non-stop. It gives me a headache. Yesterday I asked him if he could put on some music, and he did. Today, the jabbering began, and again I asked him to play music instead, and he switched to a station that was playing some really cool reggae, so that was nice.

One advantage of the roaming static clinics and the door-to-door vaccination runs is that you just get to see more of the terrain, more of the homes, and sometimes even go inside some of them.  It all seems so incongruous and fascinating. There are no streets, per se. No street signs, no avenue names. I don’t know how people manage to navigate here. The roads are all just dirt and rubble, and everywhere it looks like the place has just been bombed.  There’s literally rocks and rubble and bricks and cinder blocks everywhere. Everything is covered in red dust, and the ground is littered with small black plastic bags in various states of decomposition. Then you go inside one of these homes and there’ll be marble floors and a big screen TV.   Another home, right up the road, however, will be in horrible disrepair. And everywhere you look, there are chickens and goats and dogs and cats and barefoot children. It’s just so different from anything I’ve ever experienced. This is exactly what makes travel so fascinating.

Today we visited a home to vaccinate a bunch of dogs on their property, and there were kids and animals running around everywhere.  I think we vaccinated seven dogs on the property. We got the four dogs.

We managed to snag these two as well.

The last dog was hiding under a shed, and with great persistence from some of the kids, they coaxed it out and we vaccinated it.

I also saw this little goat. It had such a cute, childish, high-pitched bleat.  I had to get a video.

The two boys who coaxed the last dog out from under the shed were really nice and friendly.  One of the boys was using some mud to delineate a soccer pitch on the ground, and then they started playing a game using little colored pieces of plastic.

They played for a bit, and when one of the boys scored the winning goal, he jumped up and started celebrating.

Kids are basically the same everywhere.  Whether you’re wearing fancy Little League uniforms and playing with modern equipment, or using a dirt playing field and some bottle caps, it really doesn’t matter.  The joy of playing a game outdoors with your friends transcends all economic and class boundaries.

The kid with the long nightshirt was a real ham, by the way.  Not shy in front of the camera, that’s for sure.

After stopping by a few more homes and vaccinating a few more dogs, we headed back toward the school we visited in the morning. This was the most bizarre (and most fun) part of the day for me. I had the window down, and some of the kids said hi to me.  When I said hi back, they all shouted hi, and then they started running over to the truck.

Then some kids wanted to high-five me, and I obliged.  This caused many more to give it a try, and soon they were all grabbing and touching my hand like I was Justin Bieber or one of the Kardashians.

The kids were so happy and excited to have a stranger visiting their neck of the woods.

We decided to set up a static clinic right there on the grounds of the school, and we had a big audience. Those kids watched every move we made.  They went crazy when I took out the camera, and I got a lot of nice pics.

I had the selfie stick and I made a video.  I was really humbled by the sheer joy and sweetness of these children.

We vaccinated a few more dogs, and then headed back to our base a little early so I could get my post-exposure vaccination.

I know for certain that the Rottweiler wasn’t rabid, and I am current on my rabies vaccination, but there’s no leeway with the treatment.  Ya get bit, ya get injected. Not a big deal. I got my first vaccination today, and am technically due for another on Sunday night, but it’s okay to delay until Monday morning.

Tomorrow is the last day of the first week.  Helena is going to join our team for the day, and she’s fun, so it should be a nice way to end the week.  I was undecided about going horseback riding on Saturday, since I haven’t done it in ages, but it looks like everyone in the group is going, and it would be a good way to bond with them even further. Plus, the place where they do it is on the opposite shore of the lake, and I’d like to see as much of the lake as possible while I’m here.  Sunday, I’d like to find a way to go into Kumasi, and apparently a few other people want to go as well, so we’ll probably arrange a group transport. I can’t wait.