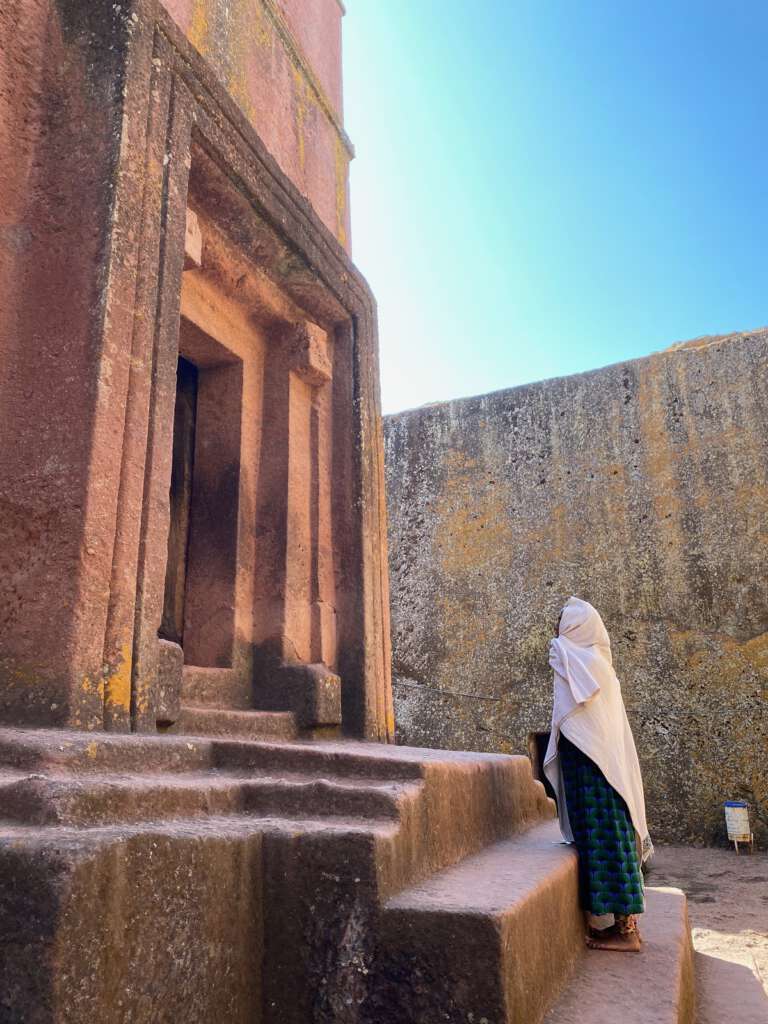 Today we woke up earlier than usual.  Sunday is a very important day of worship for the residents of Lalibela, and the procession of people heading to the church for services is an awe-inspiring sight.  Our hotel knows that tourists like to watch the processional, so they had breakfast prepared early for us. Hailu came to pick us up at the hotel right at 7:00 a.m., and we headed to Bet Medhane Alem, the very first church we visited, in the northern cluster.  These may be historical treasures, but they are also active churches that are still used today.

Worshippers gathered around the church with prayer books and quietly prayed.

The services were broadcast over a loudspeaker, and the sound of the service was solemn and hypnotic.

People just kept on coming.  All of the churches were busy, inside and out.

Everyone was praying.  It made for some really nice photos, like this woman quietly reflecting by the side of one of the churches.

This man was reading the scriptures.  I don’t know why the edges of the pages are colored hot pink, but it looks pretty cool.

This woman had her child with her on her back.  She was devoutly praying against the wall of one of the churches.

Priests were blessing the congregants.  It was quite a sight. One of the churches houses a famous 7 kg gold cross, and people attend services here so that the priest can bless the worshippers with that gold cross.  We went inside, where there were lots of families.

Mark sat down with this one friendly family and started chatting with the kids.  One girl challenged Mark to name a country in Europe and she will tell him the capital.  She put on an impressive performance, correctly naming each one we threw at her, until we stumped her with Denmark.

We then visited the main attraction, Bet Giyorgis.

This church stands alone, isolated from the other two clusters.

It’s a monolithic church, the only one in Lalibela that isn’t covered by a protective shelter.

It’s nothing short of a masterpiece.

It’s a three-tiered plinth in the shape of a Greek cross.

The view from above is the town’s most iconic sight.

The church is approximately 15m in height. It is excavated below ground level in a sunken courtyard enclosed by precipitous walls.  Its most remarkable feature is that it is carved in the shape of a symmetrical cross-shaped tower.

We made our way down, so that we could go inside, as well as walk around the small courtyard in which the church is situated.

As impressive as it is on the outside, the inside is surprisingly small and unadorned, but very atmospheric.

The case that these women are praying in front of contains an 800-year old olive wood box that holds some of the church’s treasures.

The courtyard was small but interesting.  There was a striking little alcove in one of the walls in the courtyard.

When I got closer, I realized that this is a tomb, and could see some mummified skeletal remains inside.

We soaked up the atmosphere a little bit more, and then were taken by tuk-tuk to Kana Restaurant, a lovely eatery.

After lunch, back at the hotel, Mark fell asleep immediately.  I decided to go back out while he slept, take a walk, keep my iPhone in my pocket, and just experience the town without feeling the need to document anything with photographs or videos.

As usual, I didn’t get very far before some kids latched on to me.  I know that some of these kids are friendly to the tourists in the hope of getting some kind of monetary gift, but they’re not all little hustlers.  They genuinely like visitors and like sharing their lives with us and hearing about our lives as well. I chatted with a young boy named Richard. I asked him about school.  He said that he lives in the countryside. He came to Lalibela because there are no secondary schools in the countryside, only primary schools. I asked him what he was studying in school, and he said biology and chemistry.  I asked him what profession he wanted to be, and he said a veterinarian. I told him that I’m a veterinarian, and his face really lit up. A few more kids joined us, and pretty soon I was walking with a sizable entourage. I felt like a celebrity with these kids.  Usually on our trips, Mark and I keep to ourselves, but on this trip, we decided to be more open to talking and interacting with the locals, and it made all the difference. I really felt a kinship with these kids. I don’t have any photos of this very enjoyable walk, as I stayed true to my intentions and I kept my phone in my pocket.

I made my way back to the hotel, woke up Mark, and we got ready for the monastery we were going to visit, St. Neakutoleab, which was 7 km away, and was built into the side of a mountain. The entry fee was about $3. We were lucky, because next month, the fee drastically increases to $20.

On the tuk-tuk ride, the views from the mountainside were amazing.

Lush green valleys below and clear blue skies above.

We walked a little further, and there it was, right there in the mountain: the monastery.

The monastery is fascinating. It is in a cave, and is comprised of several rooms stretching from east to west, with the mountain literally jutting out above you.

The rooms inside aren’t all that much different from those of the other churches in town, but the atmosphere is very different, very close to nature.

Water flows from the rocks jutting out above the monastery, and also drips from the ceiling inside the monastery.  This water is considered holy, and the priest who stays in the monastery collects the water in stone bowls. The sound of the constantly flowing water was soothing and hypnotic, and the views were beautiful. There are lots of birds up on the mountain, adding to the charm of the place. If I were a priest in this town, this is the monastery I’d want to be assigned to.

With this monastery trip, our guided tour came to an end.  The tuk-tuk ride back to the hotel was memorable for being super-bumpy.  We were being jostled like crazy. At one point, after a particularly wild stretch, Hailu turned around and shouted to us in the back seat, “African massage!”.  We arrived back at our hotel, thanked him profusely, and said our goodbyes. I cannot overstate how knowledgeable and considerate our guide was. He really made all the difference.  If you decide to visit Lalibela, I would urge you to book him as your guide. His full name is Hailemariam Abebe, but he’s known to all as Hailu. His phone number is +251 92 018 3334.  Send him a message on WhatsApp requesting him to be your guide. It will enrich your life considerably.

It was still daylight when arrived back at the monastery, and we headed to restaurant Ben Abebe one final time, to catch our last Lalibela sunset.

The next morning, we had an hour or two before our ride to the airport.  I told Mark about my nice walk through the town the day before, so we did another one before departing.  Once again, we picked up an entourage of sweet kids.

I had noticed earlier in the trip that there a lot of outdoor foosball tables in Lalibela.  I mentioned this to one of the kids we were walking with, and he said yeah, it was very popular there.  I’m curious about where all the foosball tables came from. Anyway, I decided to walk over to where some kids were playing and watch.  The kids were surprised to see us come over, but they kept on playing, and it was fun rooting them on.

It was getting close to departure time, so we headed back to the hotel.  I spotted some sheep on the side of the road just resting, and I asked Mark to take a picture of me with the sheep.  One of the kids, Gabriel, saw me going over to the sheep, and he wanted to be in the photo, so he ran over and grabbed the smallest sheep, picked it up, and posed for the camera.  After that, he tore a scrap of paper out of a notebook that he had with him and wrote down his e-mail address and asked me to send him the photos that I had taken. When I got home, I did send him the photos, and every few weeks, he sends me a short email asking me how I’m doing.  It’s pretty neat that I have a young pen pal in Lalibela.

We flew from Lalibela’s tiny airport back to Addis Ababa for one final night in Ethiopia.