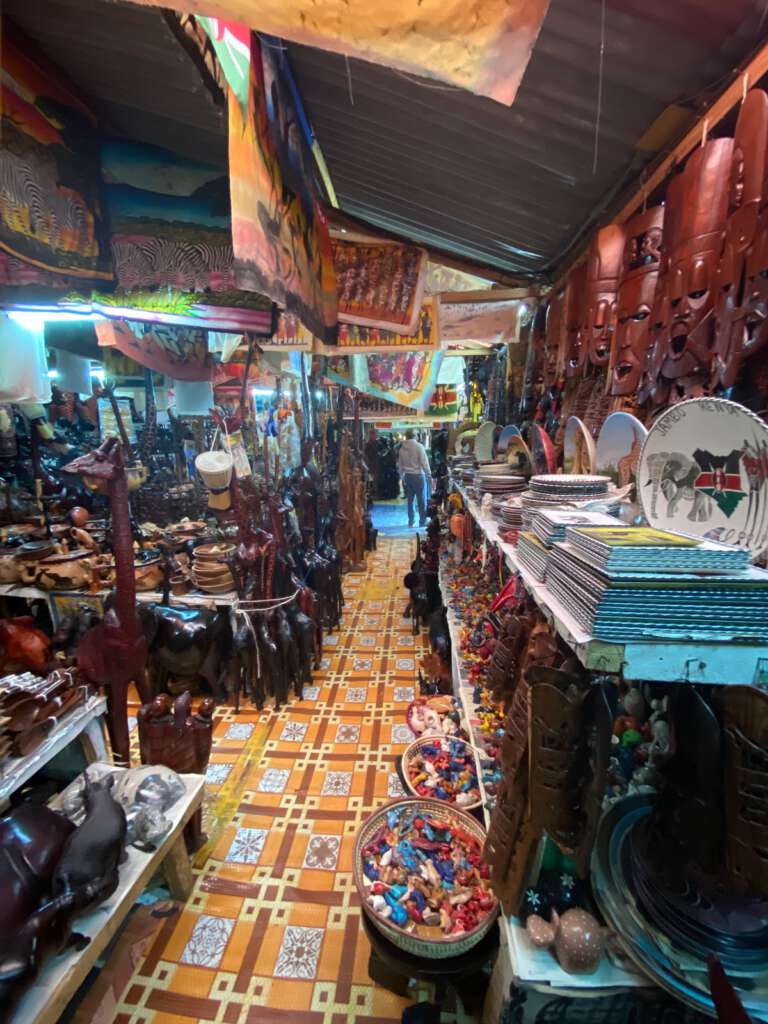 Kenya and Ethiopia – Part 4: Buying a Tourist Souvenir at the Right Price (How to Haggle Abroad)

I mentioned in a previous post about how Mark overpaid for a bowl in one of the souvenir shops.  Mark doesn’t like to haggle, and neither do I. It’s demeaning to negotiate prices with someone, especially when you know this is how they make a living and you want to pay them a fair rate for their goods. And yet, you don’t want to just walk in and pay five times the value of an item like a tourist-idiot.  It’s a conundrum. I’d rather pay a few dollars extra to a vendor with honest prices, than to a vendor who has marked up the price based on my appearance. Which brings me to how I avoid haggling over prices when I travel. It’s probably not a unique tactic, but I’ve never seen this approach discussed anywhere. Here’s the idea in a nutshell:

Here’s how it works.  Hopefully you’ve at least been to some other shops just to get a general idea of what a bowl or statue or mask might cost.  Let’s say that you want a bowl of a particular size and particular look, and the general price of the bowls you’ve seen is $15 to $40, and you really don’t want to pay more than $15.

You walk into the store and you tell the sales guy, “I’m flying back the the U.S. tomorrow and I don’t want to take any Kenyan (or Ethiopian or whatever) money back home with me.  This is the last of my money. I have $15 left. I was hoping to buy a bowl. Which bowls go for around $15?”

He/She will show you the bowls, and will initially point out cheap bowls and say that these are $15.  You immediately look at them with a grimace, so it’s obvious that you don’t really like them. You go over to the fancy big bowls and say “what about these?”  He’ll say “oh, no, those are $40.” Then you go to some smaller bowls – these are the ones that you actually really want – and say “what about these?” and he’ll say, no, those are $20 or $25.”  You look disappointed, and you keep looking. He will try to steer you to the cheaper bowls, but you say no, I really don’t like these.  I really like that type over there, and you eye the one that he said was $25. In a few minutes he’ll probably say, “Okay, I can let you have it for $20”.   That’s not a bad deal, however, this is where you get to remind him, “I only have $15. I don’t want to go back to the U.S. with it. This is the very last of my local money.”   And you keep looking. You paw at the bowls you want, picking them up and putting them down, and then maybe check out one or two other things, but always coming back to the bowl you really want.  He’ll then say, okay, $18. Again, you remind him, “Sorry, I can’t do it. I only have $15 left. I leave for the airport tomorrow morning.” It really frustrates these guys because they’re used to squeezing more money out of people.  Having a fixed price on your end really throws them off their game.

If they don’t budge, you just say, oh well…I guess I’ll just have to spend the money on food at the airport.  And then you walk out.

They will run after you and say okay, $15.  Trust me, they will. If they don’t, then you know that he went as low as he could reasonably go, because these guys hardly ever let someone leave without a sale.  If you really liked the item, wait a minute, then go back, tell them you borrowed $3 from a friend, and give them the $18.   But by saying you only have $15 at the outset, they’re forced to keep it around your desired price range.

So that’s how I do it.  I set my price, and then I haggle over merchandise.  I get what I want, at a price that I’ve already pre-set, or the shopkeeper lets a sale go simply because my set budget was too low.  I don’t remember when I came up with this tactic, but it’s worked every time.