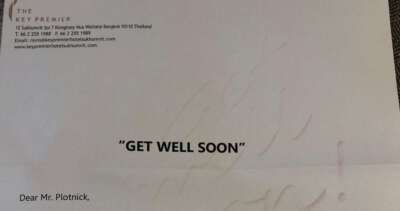 I was given a copy of the CT report.  I took a photo of the report, and then send an instant message to my friend Slobodan, a radiologist in Boston.  I met Slobodan over 20 years ago, when we both lived in Baltimore.  I would see him around at bars and parties, and we were friendly, but we never hung out much.  Years later, with the advent of social media, we became Facebook friends, and I enjoyed following the tales of his extensive travels.  He is an avid, adventurous traveler, having been to well over 150 countries, if you can imagine that.  I sent Slobodan a message that I was in a hospital in Bangkok, and what did he think of this CT report? It didn’t take long for him to get back to me.  He was very impressed with the quality of the report. He said that with my stones being less than 8 mm in diameter, I should pass them with no problem.  He didn’t think I would need any procedures to be done, and that IV fluids alone would be a reasonable treatment.  I was very grateful for his assessment.

The next day, I met the urologist.  He was a soft-spoken Thai doctor who looked to be in his mid-30s.  He took his time with me, slowly explaining what he thought would be the best course of treatment.  He recommended doing a procedure called laser lithotripsy, where he uses a laser to blast the stones into dust, which I would then pee out.  He said that the two stones near the bladder would be easy to laser. As for the stone in the kidney, he wasn’t sure what would happen with it. He felt that the pain and discomfort I was experiencing was due to the two lower stones, and that the stone in the kidney might just end up staying there, quiescent, not causing me any problems for months or years.  Or maybe not.  He couldn’t really predict.

I have had laser lithotripsy performed in the past, on a stone that got lodged in my ureter on a trip to Argentina, and it was absolutely awful, and I did NOT want to have it done.  I told him that I thought the two stones would likely pass, being that they’re small.  He said that with there being two of them, it was hard to speculate. I wanted to discuss the laser lithotripsy with some people, especially Slobodan, so I told the doctor that I wasn’t ready to decide just yet.  He said he’ll check in on me later, that I didn’t need to decide right then.  He left the room. I rested a bit, and then had to use the bathroom. I urinated, and lo and behold, I passed a stone!

Now I was more confident than ever that the second lower stone would pass soon, so I was going to decline the procedure.  I spoke to Slobodan, and he agreed.  I then got in touch with the doctor and told him I had passed a stone. He ordered an x-ray. It showed that I still had the one lower stone, which would probably pass.  But the larger stone, in my kidney, had now shifted, and was starting to migrate down the ureter. He again recommended the laser lithotripsy, but said he wouldn’t be opposed to sending me home on a medication (called tamsulosin) that would increase the chances of the stones passing.  I said I’d like to give that a try.  I did some reading on the drug, and the studies showed a pretty decent success rate for stones greater than 5 mm (mine was 8 mm). I paid my bill, was given a bunch of medications (pain medicine, antibiotics, and the tamsulosin). I went back to my hotel room.

Three hours later, I was in agony again.  I recognized this pain as the type I had when I was in Argentina.  This was the ureter trying to propel a stone that is lodged.  The pain was incredible.  I couldn’t believe that I might have to go back to the hospital a mere three hours after being released.  But there was no other recourse. I couldn’t deal with this type of pain.  I needed morphine. So… back I went.  I was re-admitted to the hospital, and given the painkillers I desperately needed. Another x-ray was taken, and nothing had changed.  I was given IV fluids and was kept overnight, and the next day, I met with the urologist again.  This time, he recommended regular lithotripsy, where they use shock waves to pummel the large kidney stone into smaller fragments.  This sounded better than the laser procedure, and was a little less expensive. I agreed to it. This would require anesthesia. Fine by me; I didn’t care at this point.

The next morning, I was taken to the very modern wing of the hospital where the procedure was to take place.  I met with the anesthesiologist, and then was taken to the lithotripsy area.  I mentioned that the room was pretty cold, and one of the nurses actually brought over a small heater that blew warm air in my direction! Such attentive service! I was transferred over to the lithotripsy table.  It looked like a big cushiony massage table, except that instead of there being a piece of the table cut out so that your face fits in it when you’re lying down, there’s a semi-circular section of the table missing, right where your kidney lays.  I guess that’s where the ultrasonic blaster ends up being placed.  I was speaking to the anesthesiologist, and he said that he was going to begin. I saw him start the injection of propofol.

I woke up suddenly in the recovery area.

I felt fine, at first.  I was amazed at how quickly I seemed to have just popped awake.  Then I started feeling some kidney cramping, and the pain just got worse and worse.  I called for the nurse, telling her that I needed something for the pain, and I was given a morphine injection.  I was taken back to my room to recover further.  Luckily, I was back in my room in time for lunch.

The food at this hospital was excellent. How often do you hear people say that?! Spaghetti with meat sauce, garlic bread, mushroom soup, some kind of Asian apple/pear fruit, and juice. Yum.

Over the next several hours, I passed six small stones.  These were pieces of the larger stone that had been ultrasonically pummeled into little bits.  I put the fragments next to the first stone I passed.  I was starting a little collection.

The next day, I met with the urologist.  He ordered another x-ray.  This radiograph showed nothing but tiny little fragments of kidney stone in my ureter, which he said would pass easily, but that I might feel a little discomfort when they did pass.  He said I could stay in the hospital one more day if I wanted, or I could be released, if I was anxious to go.  My original itinerary had me arriving in Chiang Mai on Sunday night, to start the spay/neuter project on Monday morning.  It was now Wednesday at noon. I thought, maybe if I was released now, I could possibly catch a flight to Chiang Mai around 4:00 and be there by 5:30 or 6:00. I opted to be released ASAP.  I wanted to salvage some part of the project, especially since I had agreed to write an article about the experience for Catster, the magazine for which I write a bimonthly column.

I was discharged swiftly, and I walked back to the hotel.  The staff at the desk was shocked to see me casually stroll in, and they all asked how I was feeling.  I said I was now feeling well, and that I was going to go up to my room to finish packing so that I could check out.  I told them that I needed a flight to Chiang Mai, and they offered to help me get one.  I thanked them and went up to my room.

About 20 minutes later, there was a knock on the door. I opened the door to see a smartly dressed woman holding a flower arrangement in a nice vase.

Accompanying her was three of the front desk staff.  She gave me the flowers, and the concierge handed me a letter on the hotel’s stationery with a big “Get Well Soon” printed on it.

I was very humbled by this kind gesture.  It was my first time at this hotel, The Key Premier, and I was just a short-term guest.  I don’t know if this is more of a reflection of the hotel, or of Thai people in general, but it was a heartwarming act, and it really brightened my spirits.  I headed downstairs.  It was around 1:00. The concierge took out her phone and started searching for flights to Chiang Mai. It’s a popular destination, and at least three local airlines offer several daily flights, at many different times.  She found a flight that departed at 3:45.  I filled in all my info on the site, on her phone, and then entered my credit card info, but it kept saying that the flight was full. The concierge then called the airline directly and booked it for me, giving them my credit card info over the phone.  It was amazing service. For a domestic flight, I needed to be at the airport at 2:30ish.  I asked if there was enough time to get there, and they said yes, and somehow, before I had even started to ask, there was a cab parked outside the hotel, waiting for me. If you ever travel to Bangkok, you absolutely must stay at the Key Premier Sukhumvit Hotel.  These people are the greatest.

While in the taxi, I send a WhatsApp message to Dr. Miglio, the veterinarian who runs the training center in Chiang Mai. We had sent many messages to each other as this kidney stone drama unfolded, with its many twists and turns.  Once it was decided that I was to undergo lithotripsy, I had texted him telling him that it looked like I wouldn’t be able to come to Chiang Mai.  I quickly updated him, telling him that I was on my way, and he said that he would send Ian Clarke, the director of operations, to the airport to meet me.  Finally, my Chiang Mai experience was going to happen.