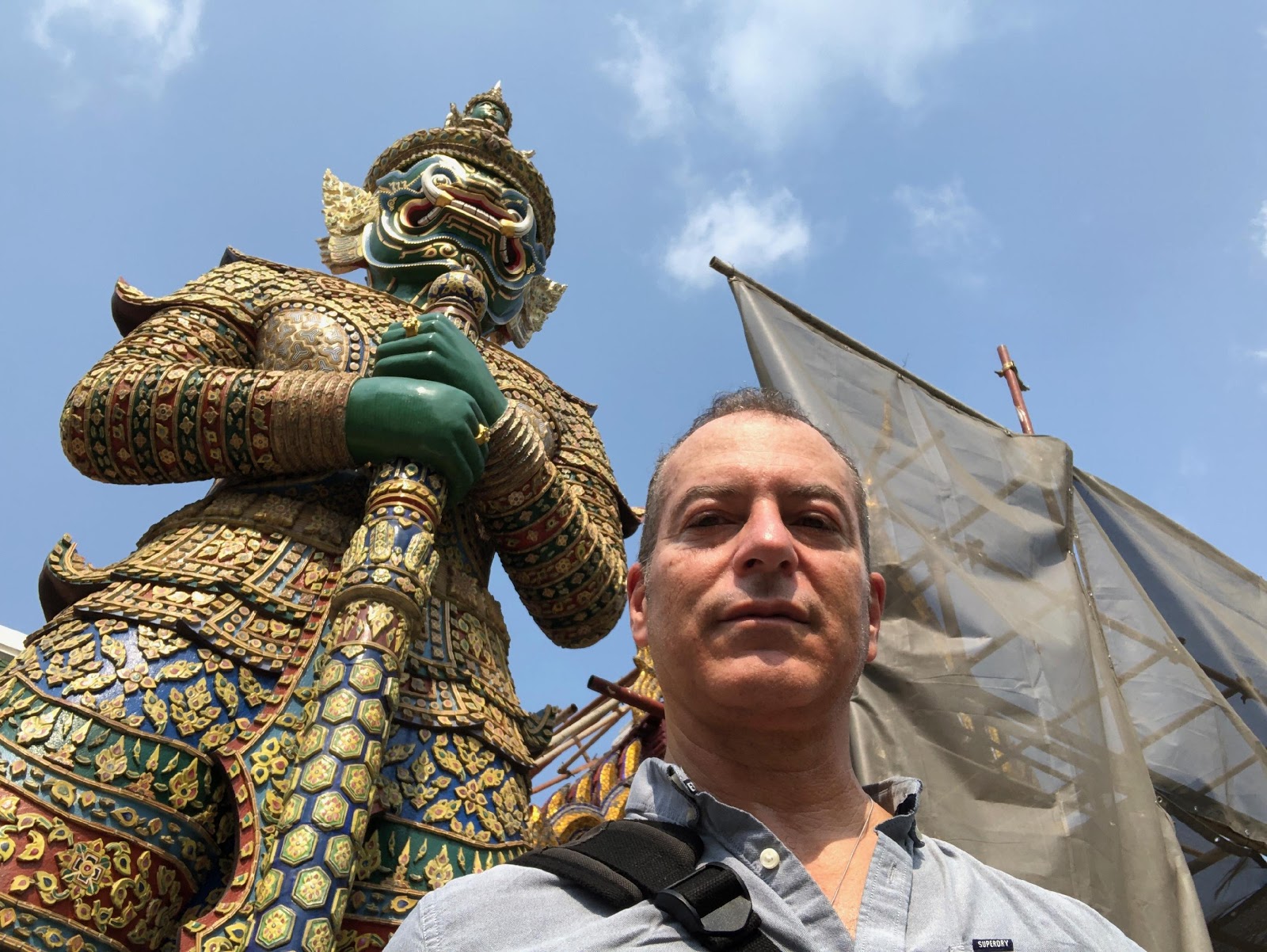 I snagged a great seat – a window seat in the emergency row, with lots of legroom – on the flight from Amsterdam to Bangkok.

Bangkok has an Airport Rail Link, which is very similar to New York’s Airtrain.  And the BTS train system is just like the New York subway.  So rather than take a cab, I elected to do things like a native, and it went as smoothly as can be.  I took the Rail Link to the last stop, Phaya Thai, then switched to the BTS.  I got off at the station Nana. Google Maps pointed me in the direction of my hotel, a mere 6-minute walk.  I arrived at the Key Premier Sukhumvit Hotel and settled in.

You couldn’t ask for a better location or a nicer hotel.

The rooms were nicely appointed, the bed was super comfortable, and the breakfast buffet was amazing: a great variety of Thai dishes, fruits, pastries, and drinks.  On every table was a card allowing you to order eggs.  You just fill out the style in which you want it cooked and the ingredients you want mixed in, and they bring it out to you.

I had my Bangkok agenda loosely planned, On day 1, I would explore the Phra Nakhon area, visiting the Grand Palace, Wat Pho, and a few other temples.  On day 2, Chinatown and a few more temples.  On day 3, the massive Chatuchak Weekend Market. The next day, I’d be off to Chiang Mai.

Day 1 started out well.  It was a sweltering hot day.  Google Maps suggested I take the BTS train, and then a bus, to the Grand Palace.  Before I left the hotel, I asked the concierge if this was a reasonable plan.  He said the bus took a very long time and that it was easier and more pleasant to take the ferry.

A ferry sounded much more pleasant to me as well, so I took the BTS train three stops to the Siam station, and then switched to the Silom line and rode it to the end, to Saphan Taksin station, and then a very short walk to the Sathorn Pier.

I ran to catch a ferry that appeared to be about to depart.  I sprinted onto it, to soon discover that this ferry was merely going just to the other side of the Chao Phraya river.  It cost me 5 baht (about 17 cents) to cross the river, and another 5 baht to go back. D’oh!

I then walked a few meters to the proper ferry station, and for 20 baht, I took the ferry to the Tha Thien stop, and strolled toward the Grand Palace.

I thought I was well prepared, having taken a bottle of water and a washcloth to dab the perspiration from my face throughout the day (it was about 93 degrees, and as humid as a greenhouse). But I had forgotten to apply sunscreen, and I also probably should have packed a hat.  So I ducked into a store and bought a tube of overpriced sunscreen. As I got closer to the palace, a woman in a nearby shop tried to sell me some sheer, wispy pants that resembled pajama bottoms, saying that they won’t let you into the Grand Palace in shorts, and that I’ll need long pants, and these were only 100 baht.  As a New Yorker, I was born suspicious, so I did an internal eye roll and kept walking.  I got through the palace gate and was walking with the masses toward the ticket booth when a security guard stopped me, forcing me to detour to a nearby shop on the grounds where I had to purchase long pants, as shorts were indeed verboten. Of course, their same flimsy long pants were 200 baht. Sigh. I had been to the palace before, about ten years ago, with Mark and his parents, and much of it was coming back to me.  Amazingly ornamented buildings and monuments.

I particularly liked the hall with the incredible wall murals.

Unfortunately, the place is a hot tourist attraction, and there are always a ton of visitors, allowing no time to really linger and appreciate the architectural treasures before being jostled or prodded.

I left the Grand Palace and walked ten minutes in the blazing heat to the next temple, Wat Pho.  On the way, I spotted an adorable kitty and bent down to pat her. She loved the attention.

I remembered this place pretty clearly from the last time I visited.  It’s hard to forget the 150-meter long reclining Buddha. Although I had seen it before, it retained all of its ability to stun the second time around.

The last time we were here, we didn’t walk around the rest of the Wat Pho complex much.  I think most people come to see the big-ass Buddha and then split. There’s actually a ton of stuff to see here.

I saw this concrete…  I don’t know what you even call it.  Just an architectural structure on the grounds.

But I spotted something moving inside. I peeked inside through one of the holes in the concrete and saw a cat.  I tried to encourage her to come out, but she just moved further away. I put my iPhone camera right up to one of the spaces that was carved into the side, and took one of my best pictures of the trip.

After about a half hour of visiting the various sites, I came upon a young guy feeding two cats some dry cat kibble.  I went over and asked him if he always brings cat food with him when he travels.  He said, in an accent I couldn’t quite place, that he feels bad for the street cats, so he usually does carry food with him. I told him that I was a cat veterinarian and that I’ve done the same thing, including bringing antibiotic eye drops with me, if the place I’m going to is known for having a lot of stray cats.  He thought that was pretty cool. I told him that I had just seen four cats on the grounds, and he asked if I could show him where. I took him to the spots. The cats were still there. He fed them all. There are kind people in this world.

There were two temples in the area that I did not visit on our last trip to Bangkok, so I put them on the itinerary.  Although they weren’t far from Wat Pho, everything seemed far in this heat.  The first temple was Wat Ratchaphradit. It’s a small temple. I found it easily enough.  It was totally deserted. Serene, but not very impressive. Nearby, on the other side of the khlong (canal) was Wat Racthabophit, supposedly a magnificent temple.  I trudged there, only to find that it was closed while under renovation.  I was actually a bit relieved, as the Grand Palace and Wat Pho were larger and more extensive than I had remembered, and I had seen my share of wats for the day. I was getting watted out.

The weather was really unbearably hot.  I had a handkerchief with me and was constantly dabbing my head with it, until it was completely wet.  Knowing that this is kidney stone inducing weather, I was drinking obsessively, bottle after bottle of water.  I wasn’t hungry, as the constant water drinking filled my stomach and killed any hunger.  I walked a block or two, looking to maybe buy a smoothie or iced tea.  I hate drinking water and was getting sick of it. A nearby street seemed relatively busy, so I wandered over, and was surprised to find, nestled between two ugly storefronts, a very modern cafe called Cafe 14.  I was a sweaty mess, and I was grateful that this cafe was (weakly, but adequately) air-conditioned. I ordered a Thai iced tea, and drank it pretty quickly.  I ordered a second one, and tried nursing it for a while at my table, as I slowly cooled off.  After a new minutes, I used the restroom. Despite all of the stone-preventative drinking I had done, it was to no avail. I was getting twinges in my right kidney. I wanted to visit the National Gallery and the amulet market, but this put the kibosh on those plans. I thought it best to just go back to the hotel and rest up. I found a tuk-tuk and told the driver where my hotel was.  It was a 40-minute ride.  About 20 minutes into the ride, I desperately had to urinate. All of the liquid I drank was now doing what it was supposed to do. I thought I would just wait until I got back to the hotel, but I could tell that I wouldn’t be able to hold out. I leaned forward and asked the driver if there was any way to stop at a toilet on the way. He immediately said yes, and in two minutes he pulled into a gas station and right up to a toilet, as if he had planned it the entire time.  He dutifully waited for me, and we zoomed right back onto the road.  That act of consideration earned him an extra 50 baht as a tip. Although I wasn’t in any serious pain, the presence of a little blood in my urine was getting me a bit distressed. This happened in Myanmar, first in the city of Bagan. Three days later, in Inle Lake, Myanmar, I was in groaning in agony. I took it easy at the hotel the rest of the day and everything was fine.