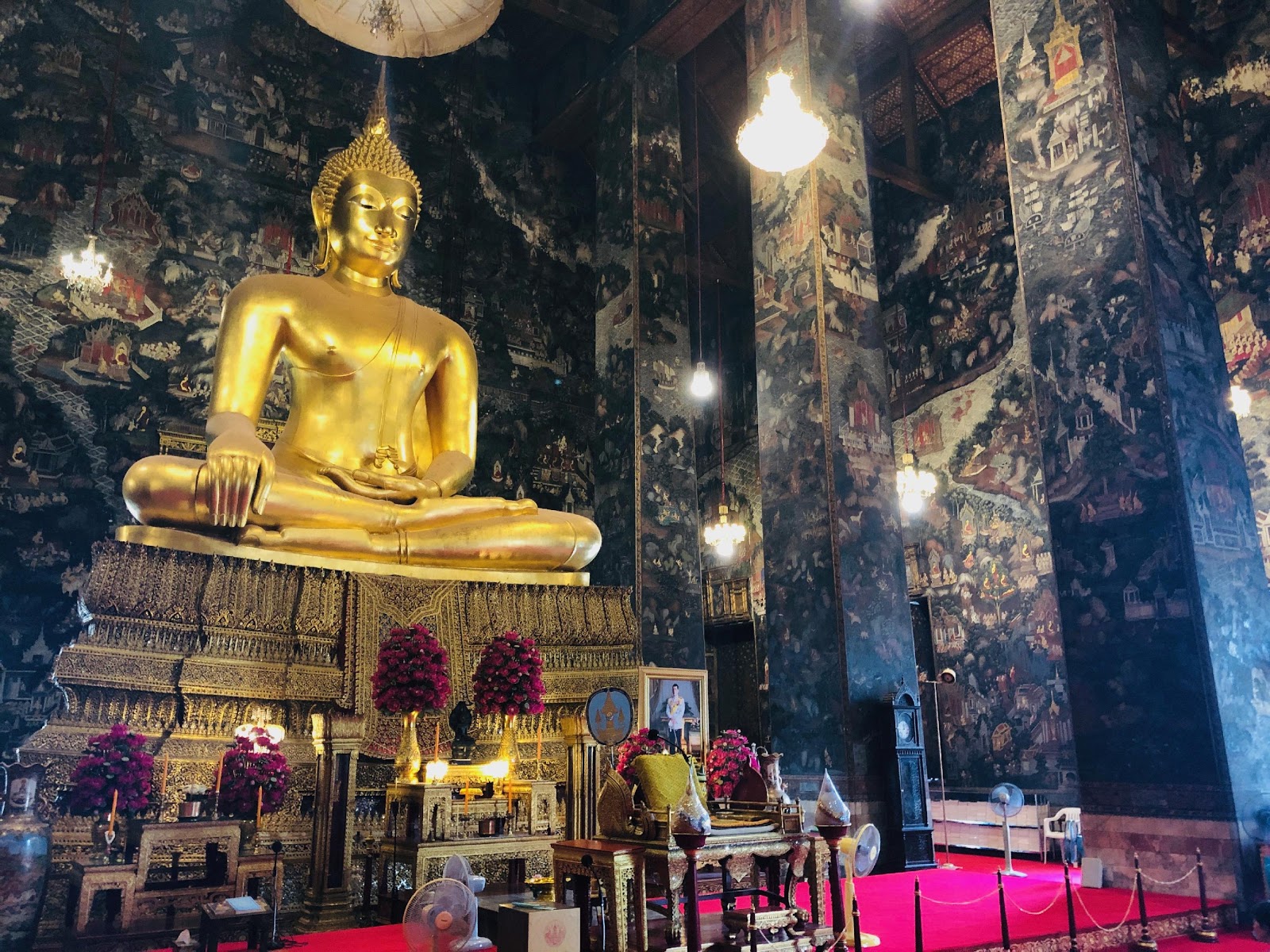 For Day 2, the itinerary was lighter:  A visit to another temple (Wat Suthat), and then a local park, and then finish the day strolling through Bangkok’s extensive Chinatown.

First, I chowed down at the hotel’s excellent buffet.

I took a tuk-tuk to Wat Suthat, just north of Chinatown.

Wat Suthat is one of the city’s most beautiful and biggest temples.

It was amazing.  The gallery at the periphery houses 156 statues of the Buddha, and the main hall has a 27-foot tall Buddha cast in bronze.  I’ve been to temples that have rows of Buddha statues before, and there’s always something so awe-inspiring about it.

There were many monks on the grounds, reading and studying, and everywhere you turned you’d fine a statue or shrine or a pagoda or a monument.

The place oozed serenity and holiness.  It was fabulous. I found one room that was populated by many identical statues.  They didn’t look like Buddhas. I suspect they were supposed to depict monks. There was incense burning somewhere, and a tape of some very melodic chanting was playing over discreetly hidden speakers.  It was so atmospheric.

Monks fascinate me.  Their devotion to a life of peace, meditation, and serenity has always mesmerized me.  I wonder, if I had grown up in a Buddhist country like Thailand or Burma, if I would have taken that path.  I certainly can’t imagine a life like that now, but one of my goals in retirement is to eventually participate in a meditation retreat; a short one, maybe 3 or 5 days.  It’s probably the closest I’ll ever come to that kind of life.

Before I left, I had to visit the 27 foot high bronze Buddha in the main hall.  Beautiful.

After Wat Suthat, I went to a public park and relaxed on the grass.  The park was a short, pleasant walk away. It was quiet and picturesque, and I found a nice spot on the grass where I could relax and soak up some of the peaceful ambiance.

I passed through a busy section of town with many stalls selling everything imaginable. One stall was selling hats, and I realized that it would be wise to get one, to shield my head and face from the brutal sun.  I bought a plain grey baseball cap for only 100 baht ($3.30).  Perfect.

One of my guidebooks recommended a small but striking temple called Wat Chakkawat, near Thanon Yaowarat, the main road that runs through Chinatown.  I found the temple, which was actually part of a complex of buildings that were pretty neat.  It was pretty deserted, so I had it all to myself.  One wall of the temple had many man-made niches, into which people inserted all sorts of statues and offerings. After popping in and out of the various temples (including one which housed a few large, living crocodiles), I made my way into the heart of Chinatown.

Thanon Yaowarat is Chinatown’s main thoroughfare. It runs for about a mile, and is loaded with silversmiths, apothecaries, cheap restaurants, and authentic (and somewhat dirty) food stalls. Some sections of the street seemed to have mainly electronics shops.  On the next block, it was nothing but bookstores, and then mostly appliance shops. It really wasn’t much different than many of the other Chinatowns in countries across the world.

The time now being 2:30 p.m., I grabbed a tuk-tuk to make it to the National Gallery with enough time to see the exhibits (the museum closes at 4:00), and then it was a 15 minute walk along the waterfront to the amulet market.

The National Gallery was small and a bit drab, however the temporary art exhibits make it worth the visit.

The paintings in the permanent collection were mainly Thai kings and princes. They were there more for historical importance than artistic merit.  There were two temporary exhibits, one of which featured a Thai painter whose style I really liked. That alone made the visit to the museum worthwhile.

I left the museum and then proceeded to stroll along the riverbank to the amulet market.  The path to the market took me through a university campus, and it was nice seeing all the students around.  I had the Chao Phraya river on my right, and the sun reflecting off the water was pretty.  The section of town where they sell all the amulets has its own type of charm. I scanned the market, looking for a little amulet to get for my friend Matt.

He’s a spiritual type who collects things like this, and I try to bring him something of significance whenever I visit a place that has an aura of holiness to it, like India or Thailand.  I did find a nice triangular stone amulet, which I know he’ll enjoy.

Right outside the amulet market, I spotted a cat sleeping on a glass display case. She was pretty cute.

I continued walking in that neighborhood, literally stopping every 30 to 45 minutes to get another drink or smoothie, given the oppressive heat, and my paranoia about kidney stones.  While wandering, I passed an interesting little alley and decided to stroll down it. I thought it might be a street with vendors selling interesting items or street food.  It actually was just a regular ol’ street, but in a pretty low income neighborhood. The street was narrow and everyone had their doors open, trying to keep their homes a little cooler.  Mothers were cooking, children were playing, cats and dogs were running around. It was a very authentic, interesting slice of Bangkok life.

I did see something that, as a veterinarian, I found moving, and I did take a photo.  There was a pet rabbit on the ground. The rabbit must have suffered a spinal injury at some point in its life (which is common for rabbits), and it was paralyzed in the rear legs.  Well, this rabbit clearly meant a lot to someone, because they had fashioned a makeshift wheelchair for this bunny.  I’ve seen carts for paralyzed dogs before, but never for a rabbit. The rabbit looked clean and comfortable. It shows that it doesn’t matter where you are in the world. People are people, and we form deep bonds with our pets, and we’re willing to do whatever we can to care for them and keep them around, and this applies across all countries and cultures.  It warmed my heart and made my day.

Alas, the train station appeared, and I hopped on the train and went back to my hotel.  So far today: no pain, no discomfort.  I’m feeling hopeful about this kidney stuff.