After visiting the Royal Granaries in Meknes, we decided to skip the medina in Meknes.  It was a tough decision, but we had hired our driver, Naji, just for the day, and we had to decide what to do:  explore the souks and food stalls in the Meknes medina, or visit the American Fondouk, a veterinary hospital just outside the Fes medina.  For me, this was an easy decision.  I’m a veterinarian, and I was struck by the number of stray cats in the cities we visited, and how so many of them are in ill health.  I was also very aware of the number of mules and donkeys in the Marrakech and Fes, and was anxious to learn about their veterinary care as well.   Naji wasn’t sure of their operating hours, but we were willing to risk it.

The drive back to Fes was about 90 minutes.  As we got close, Naji pointed out a white compound with tall green hedges all around it.  “There it is”, he said.  I spotted the American flag alongside the Moroccan flag. 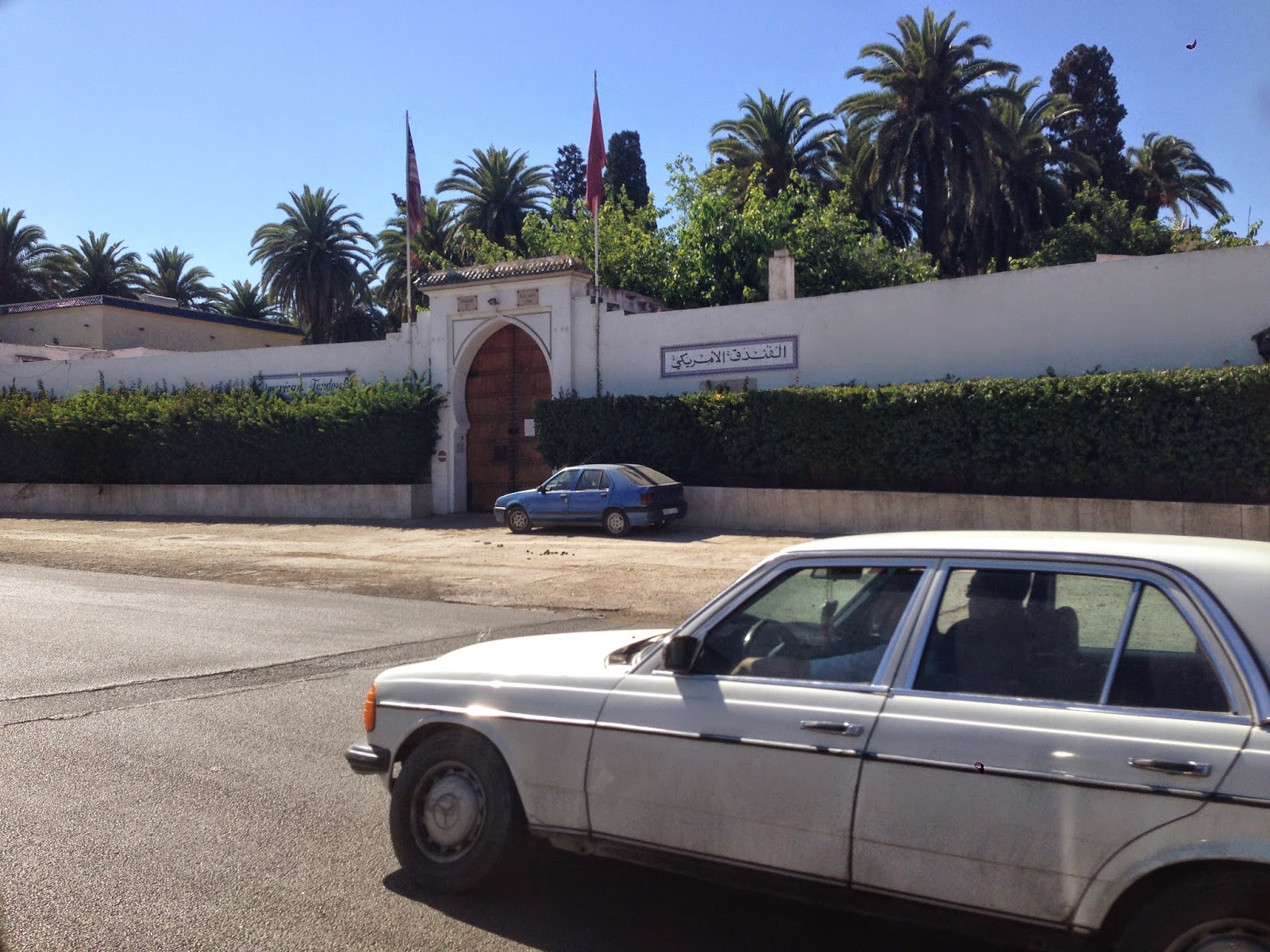 Obscured by the hedges was the sign identifying the building.

After about a young woman answered the door, and Naji began speaking to her in Arabic.  She went back inside to speak to someone.  The door opened again, and a young man in coveralls appeared.  He and Naji had a short conversation, during which Naji told him that I was a veterinarian from NYC and that I was interested in seeing the Fondouk.  The young man was Dr. Ahmed Khairoun, a recent graduate of Morocco’s veterinary school.  He was doing an internship there, and agreed to give me a tour!
So what exactly is this place?  Here’s the scoop.  Europe has been, and likely always will be, the world’s most desirable travel destination. In the 1920s, however, nearby Morocco was at the heyday of European tours, becoming an increasingly fashionable vacation spot.   When American tourist Amy Bend Bishop passed through Fez on an extended tour of Europe and the Mediterranean in 1927, however, the beauty of Morocco was offset by what she saw as the horrible conditions of animals, especially working equines (donkeys and mules), which numbered over 40,000.  The country depended on agriculture, and draft and pack animals were worked hard by their owners, most of whom could not afford (and didn’t understand the importance of) proper animal husbandry and nutrition, nor the value of good veterinary care.
Ms. Bishop, who was the wife of eccentric (and wealthy) gallery owner Cortlandt Field Bishop, could not sit idly by.  She urged Dr. Sydney Coleman, a well-known New York animal activist, and Dr. Frances Rowley, then president of the MSPCA, to build a hospital to provide free veterinary for the neglected animals of Morocco.  She donated $8000 to the project, an enormous sum of money in 1927.  The service was named the American Fondouk (which translates as “inn” in Arabic).  Built around a shaded courtyard on the Rue de Taza just outside the city, it has operated there ever since.
I went inside, and indeed, I was in a shaded courtyard. 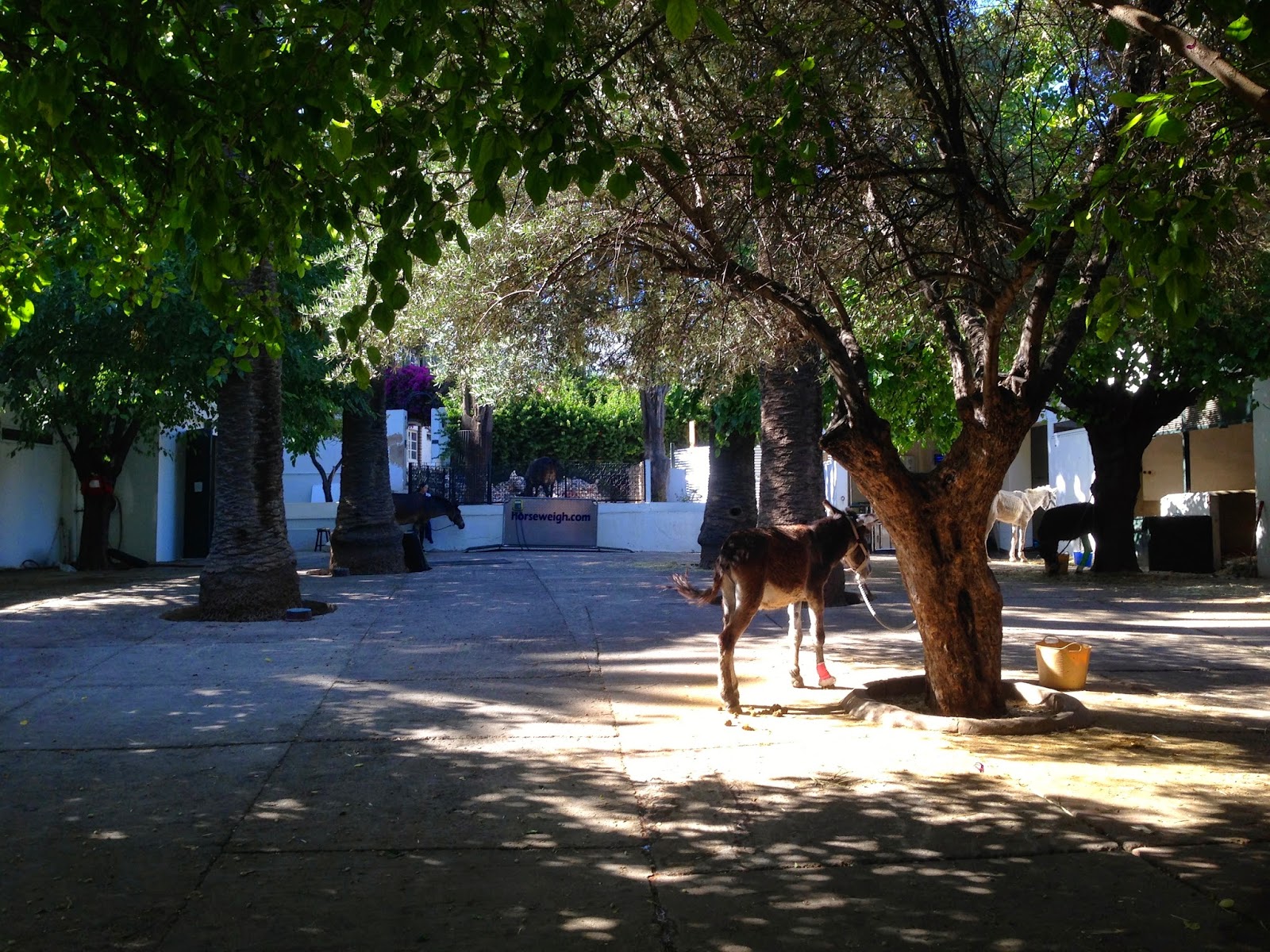 I wasn’t alone, though.  The eyes of many horses and donkeys were upon me, as the periphery of the courtyard was dotted with stalls and enclosures for the many equids in the courtyard. 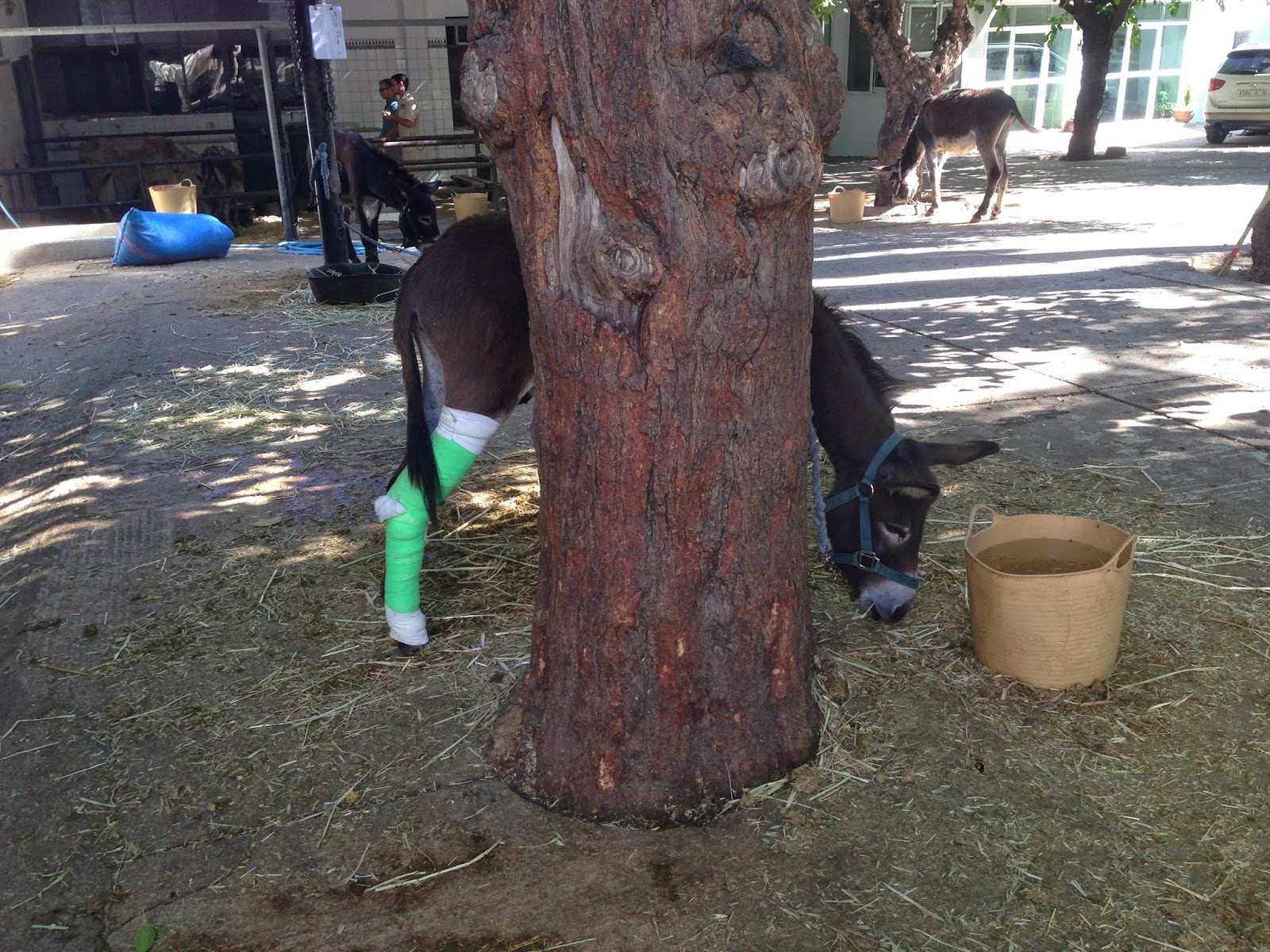 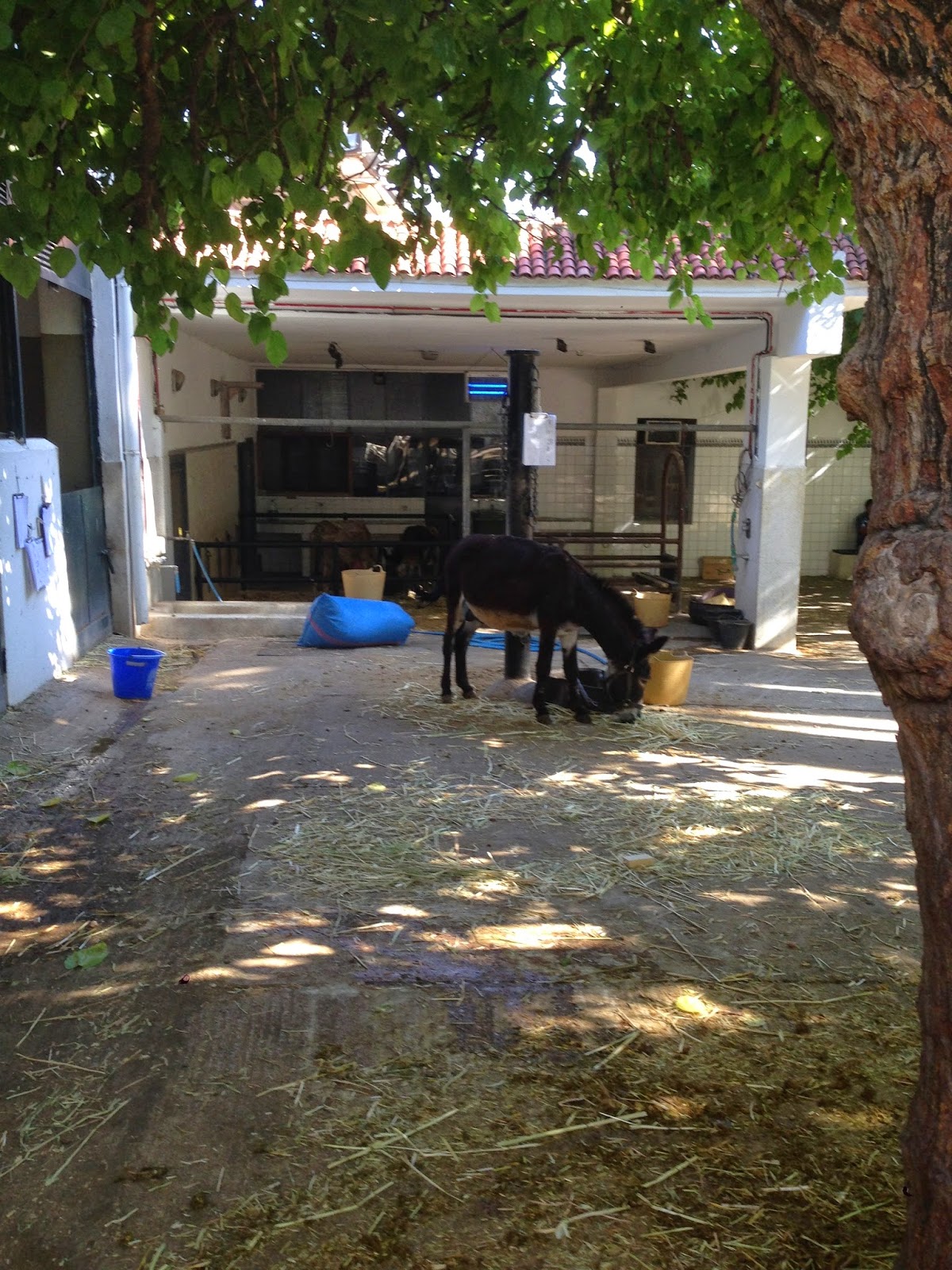 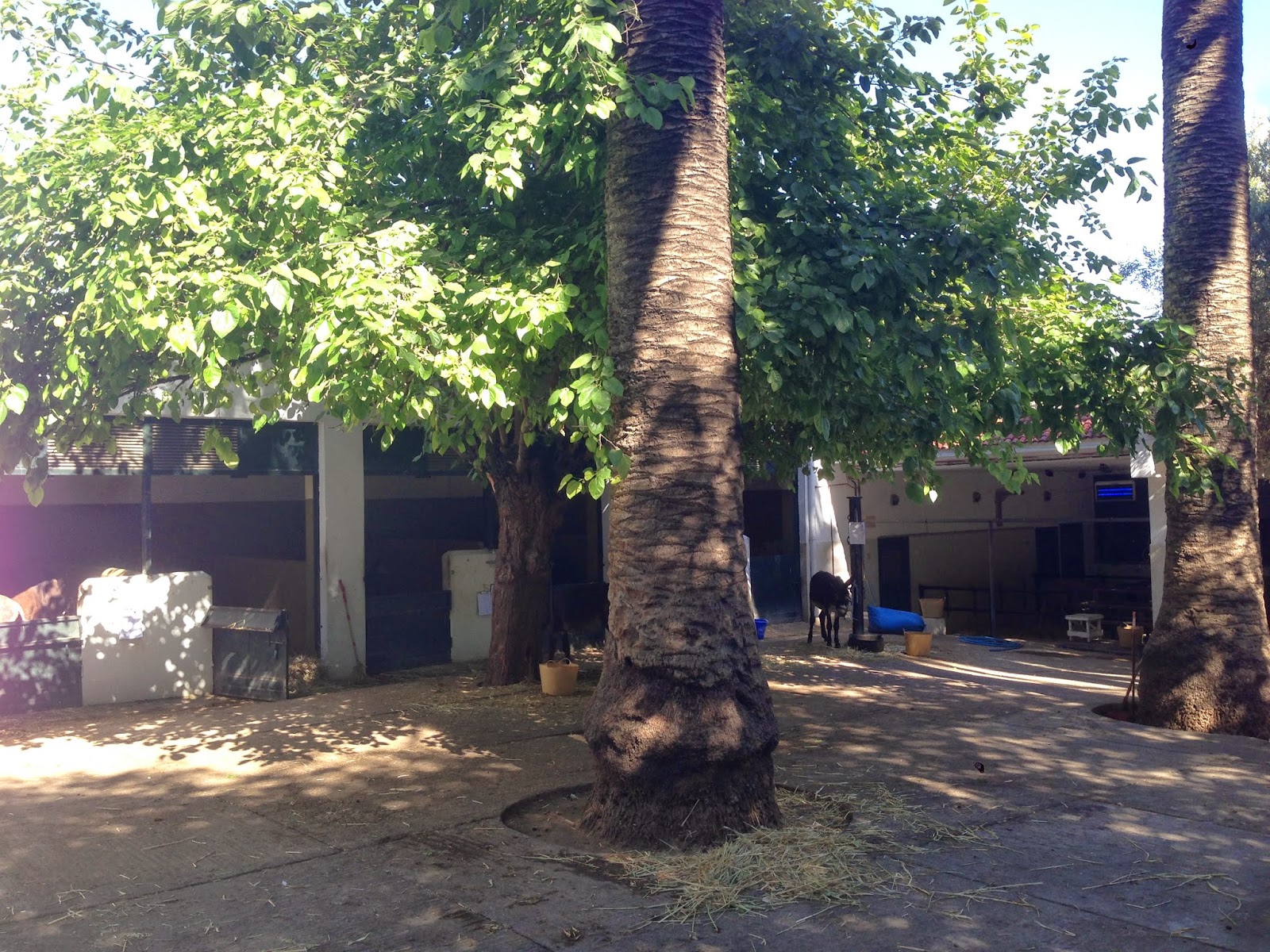 Dr. Khairoun conducted “rounds”, going from stall to stall and giving me rundown of why the animal was there, and how it was being treated. 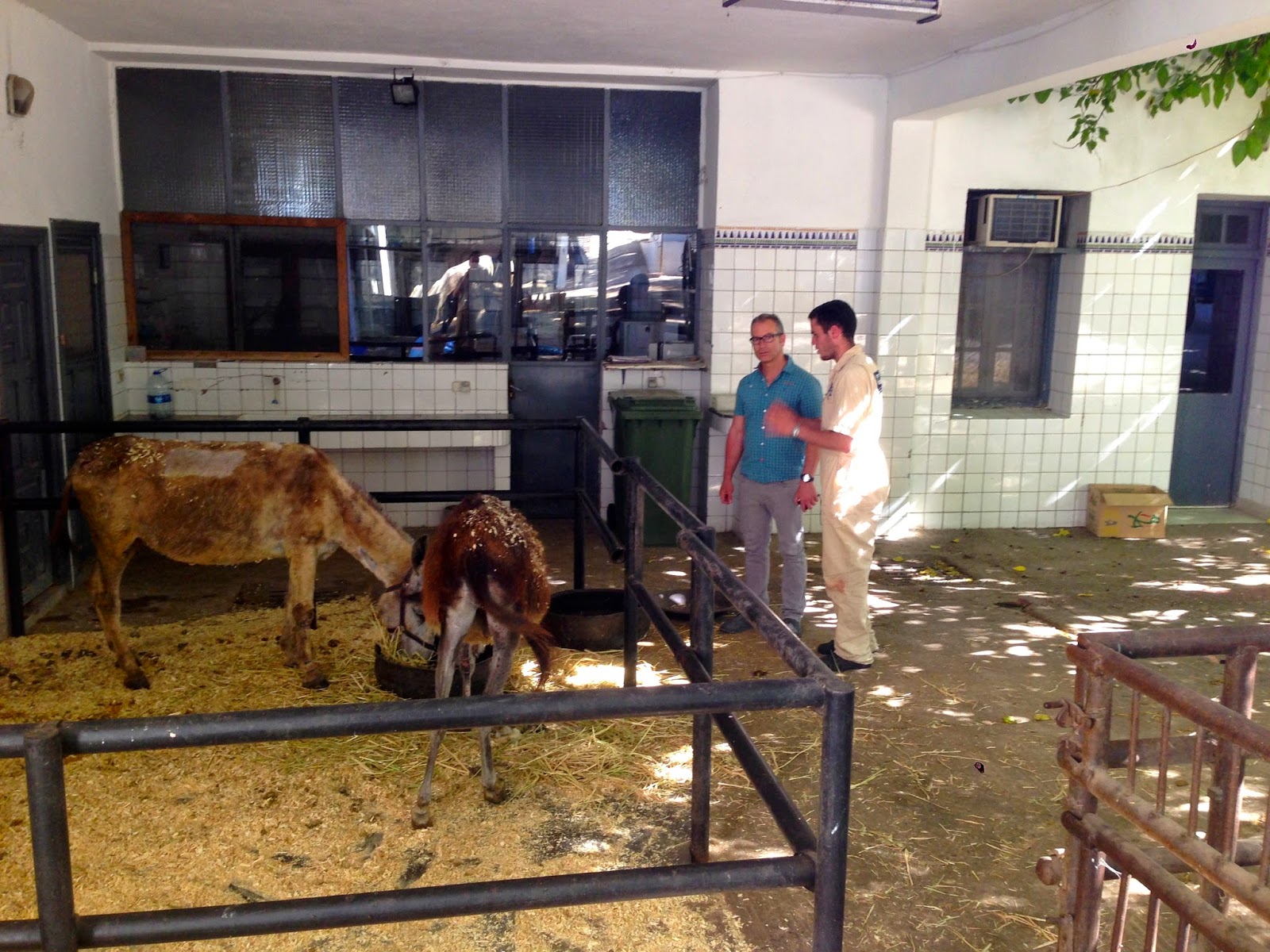 In a manner very similar to the way we used to keep track of the animals in the large animal barn at my veterinary school, the Fondouk keeps a “white board” listing all of the animals currently being treated. 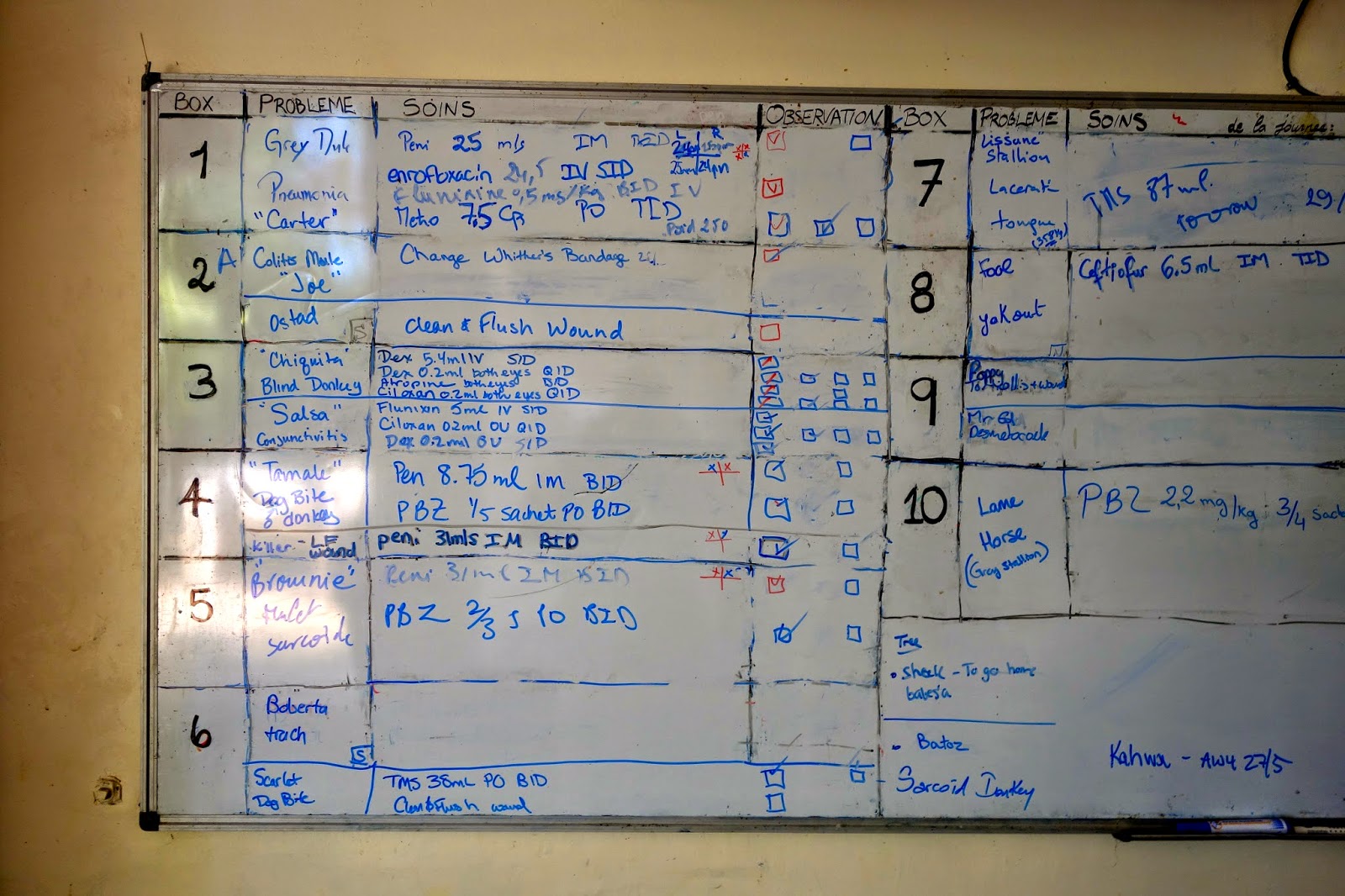 On the premises that warm afternoon was a donkey named Carter with pneumonia; Joe, a mule with colitis; a donkey with conjunctivitis named Salsa; Tamale, a donkey that had been bitten by a dog; and a stallion with a laceration on his tongue.  As we stopped by each stall and Dr. Khairoun gave me a rundown of the case, I felt like I was back in veterinary school again.   And it was a great feeling. 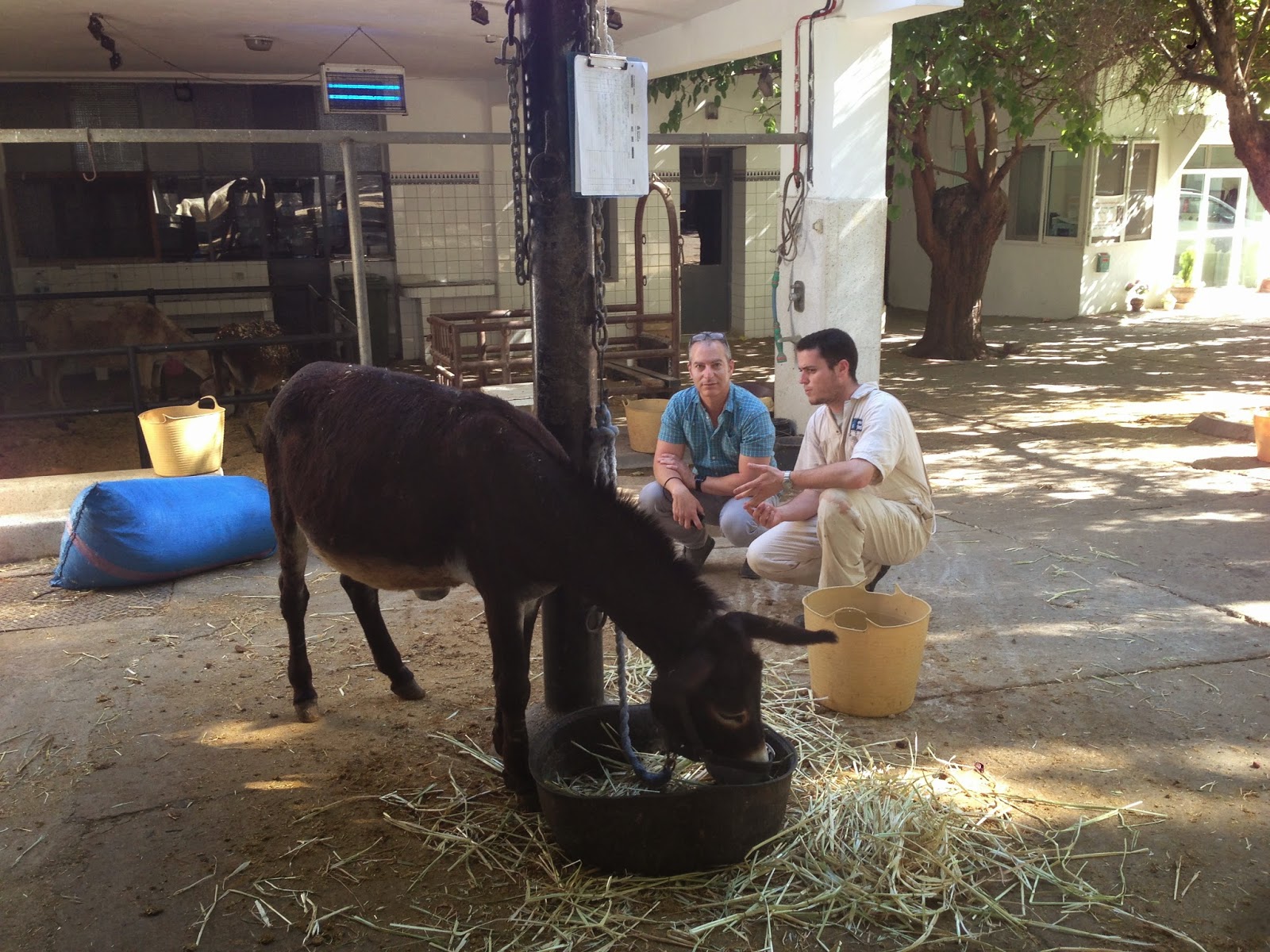 Dr. Khairoun and I immediately hit it off.

It was obvious how proud he was of the Fondouk, and he clearly enjoyed sharing his experiences with an outside veterinarian.  Once he heard that I was a boarded internist, he knew that he could really talk about the medical aspects of the hospital, rather than give a superficial “touristy” tour of the facility.  I was impressed with how well-equipped the facility was. 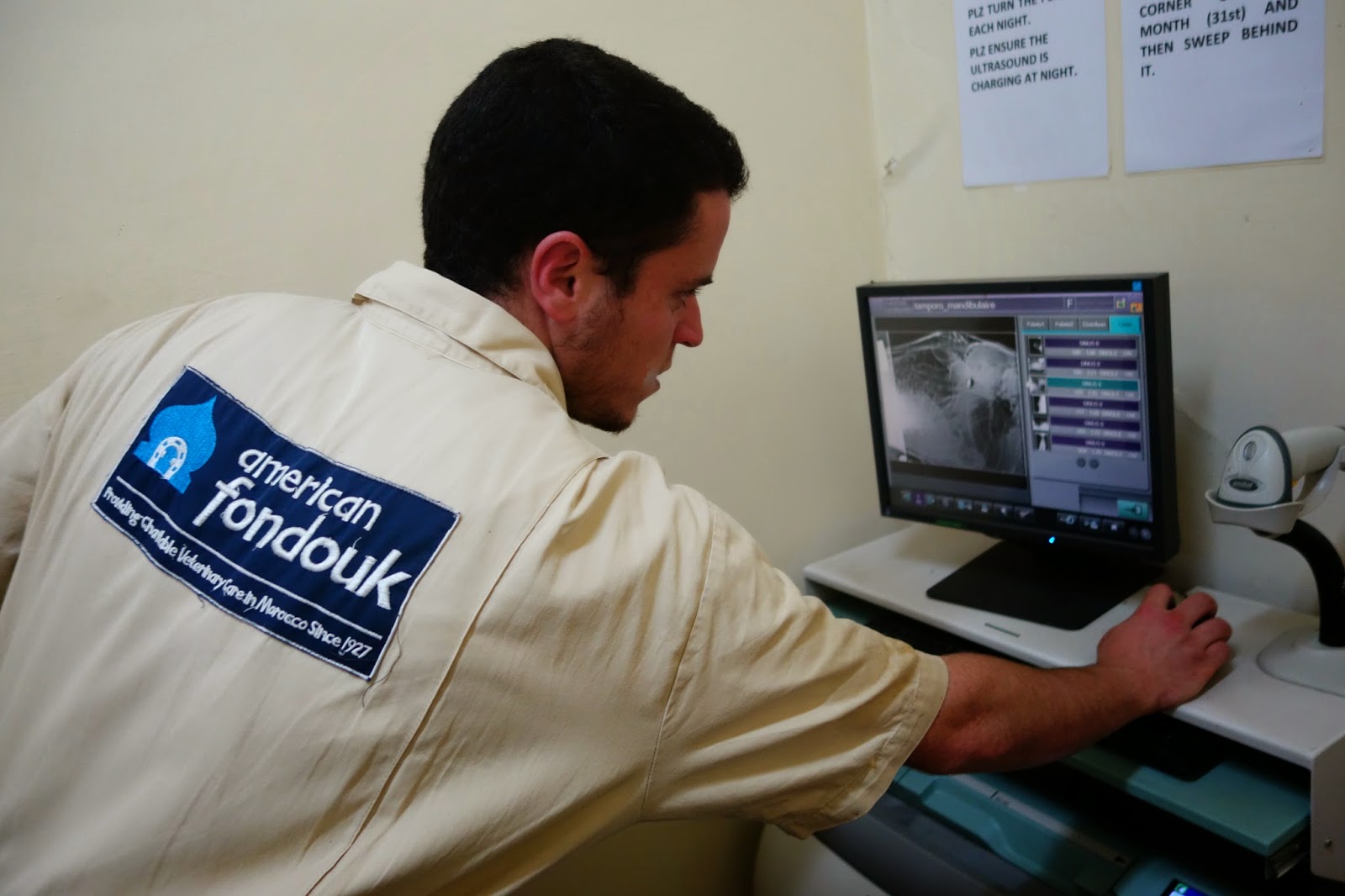 He showed me their pharmacy, their medical and surgical supplies, and their ultrasound machine.

He also showed me their microscope and in-house laboratory. 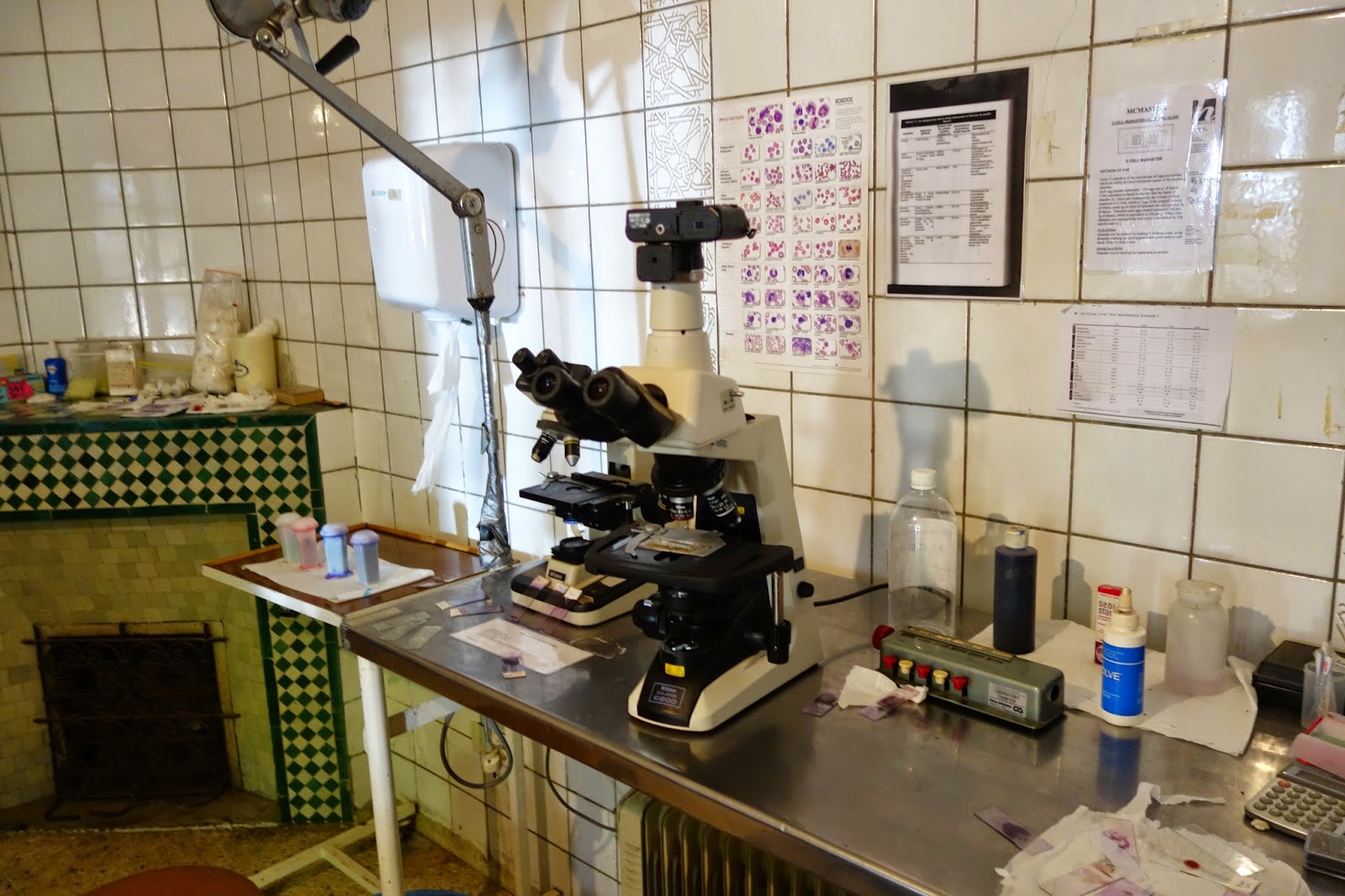 We also posed for a picture in front of their ambulance. 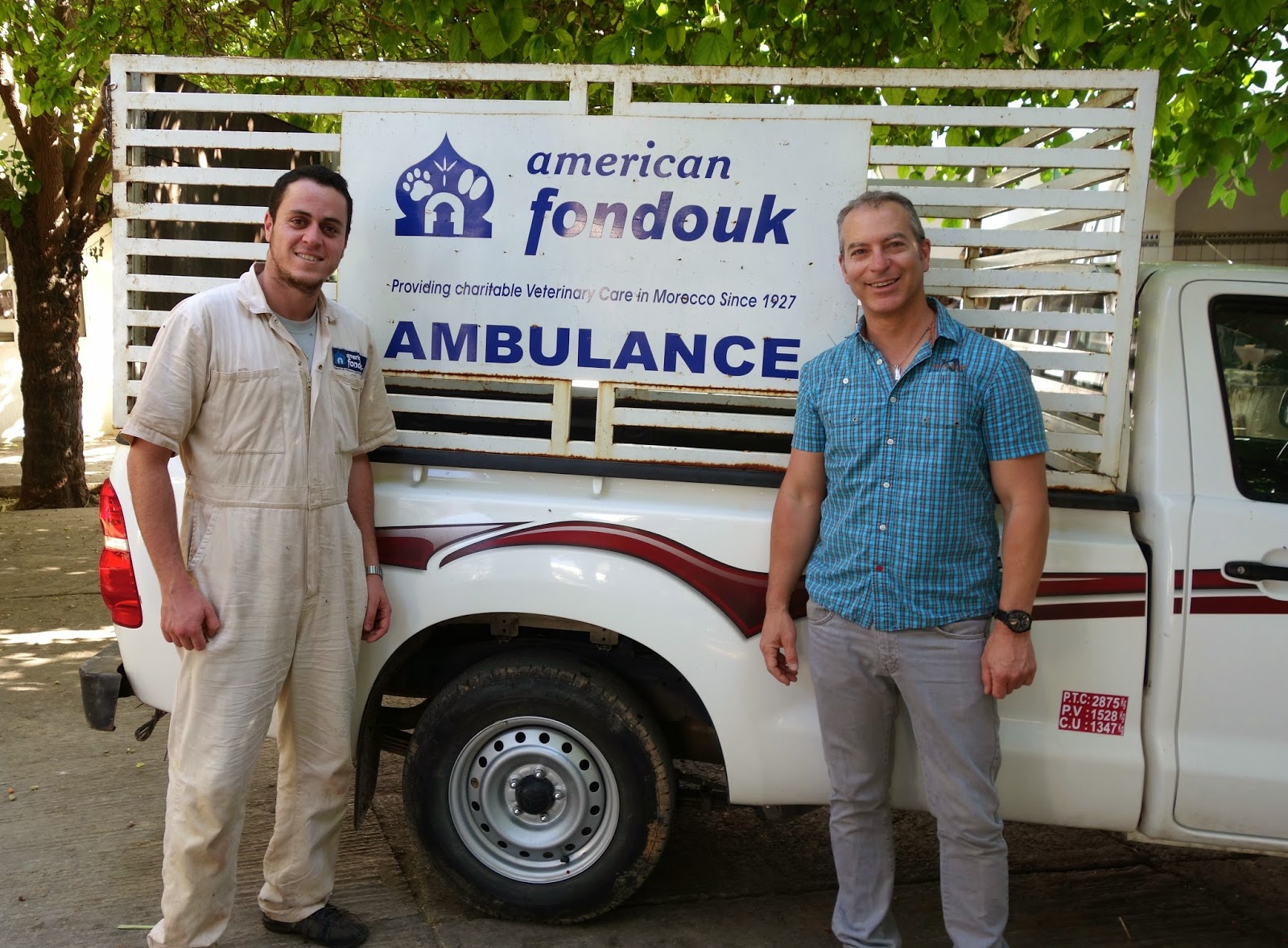 The hospital treats over 20,000 animals for free every year.  More than three-quarters of a century later, Morocco has made enormous strides, but it is still a developing nation, with over 40% of its residents living below the poverty line.  Veterinary care tends to be viewed here as a luxury.  For cats and dogs, it most definitely is; for countries whose economic survival is carried literally on the backs of these animals, it is anything but.  The costs of running the Fondouk are around $25,000 a month, all of it coming from donations. 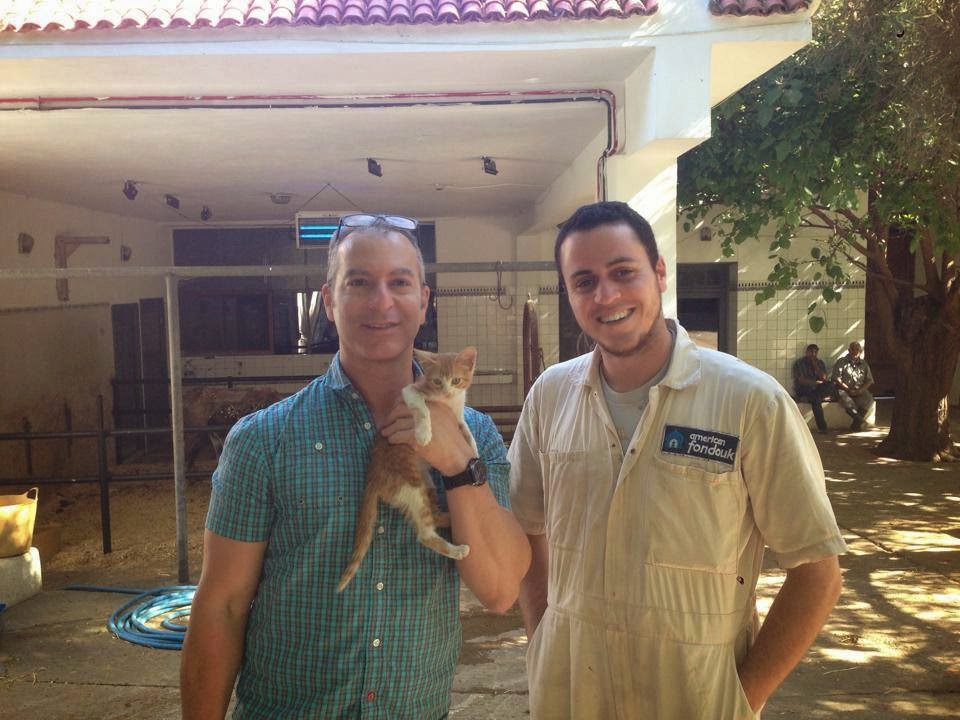 Of course, my focus is on cats, and I was wondering if the Fondouk treated companion animals. Unfortunately, with limited financial resources, the Fondouk can no longer afford to treat cats and dogs. The focus is now entirely on equids. Students from all over the world apply for externships at the Fondouk, and I met a few of them as well.  It is the charitable nature of the Fondouk that appealed most to Khairoun. “The owners of these animals are poor and they cannot afford treatment,” he told me. “Seeing the smiles on the faces of the people who bring us their animals is very rewarding”. After his program at the Foundouk is complete, Dr. Khairoun will be doing an internship in Equine medicine and surgery at the veterinary school in Lyon, France.
As I left, I noticed a sign commemorating the founding of the Fondouk by Amy Bend Bishop and a sign thanking visitors for helping them in any way they can. 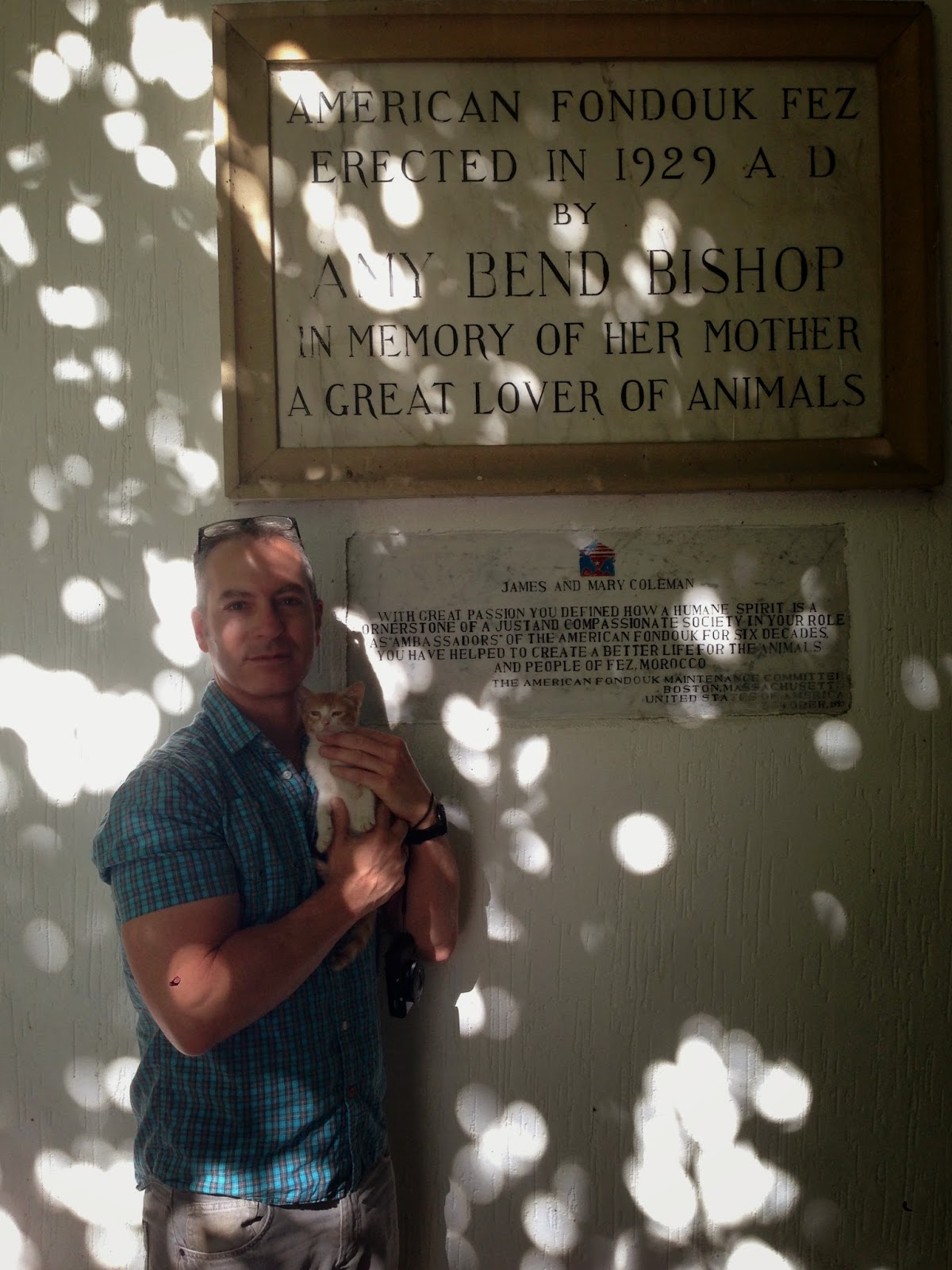 The sign said that “The donkeys of Fez need you”, and they really do. 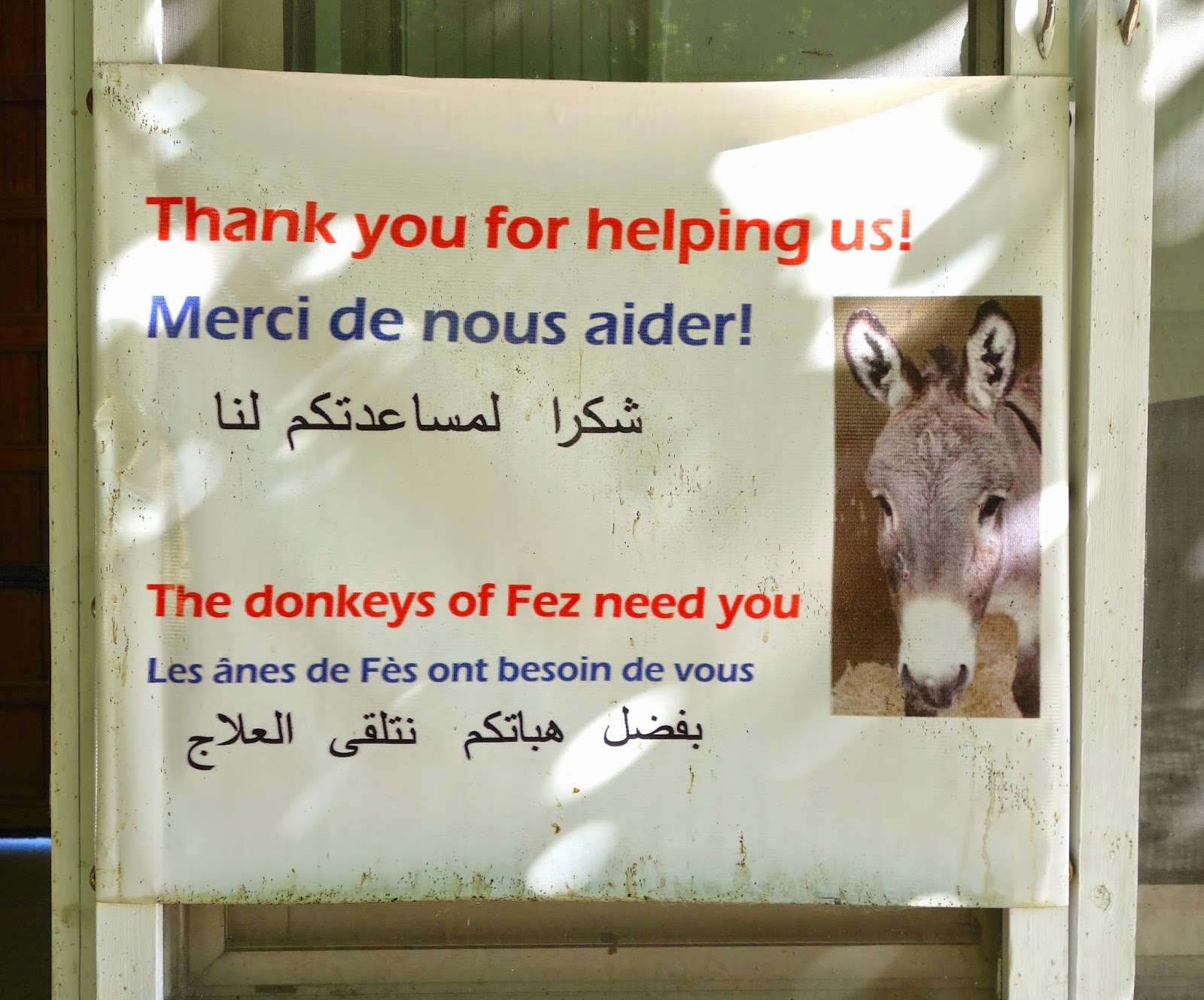 If anyone reading this would like to contribute, please visit their website www.mspca.org/americanfondouk/and click the link for donations.
Naji drove us back to Bab Boujoulud, and we strolled back toward our riad.  Saw a lot of cats gathered around another butcher stand.  I liked the variety of colors….cream, black, tortie, black and white, and orange and white. 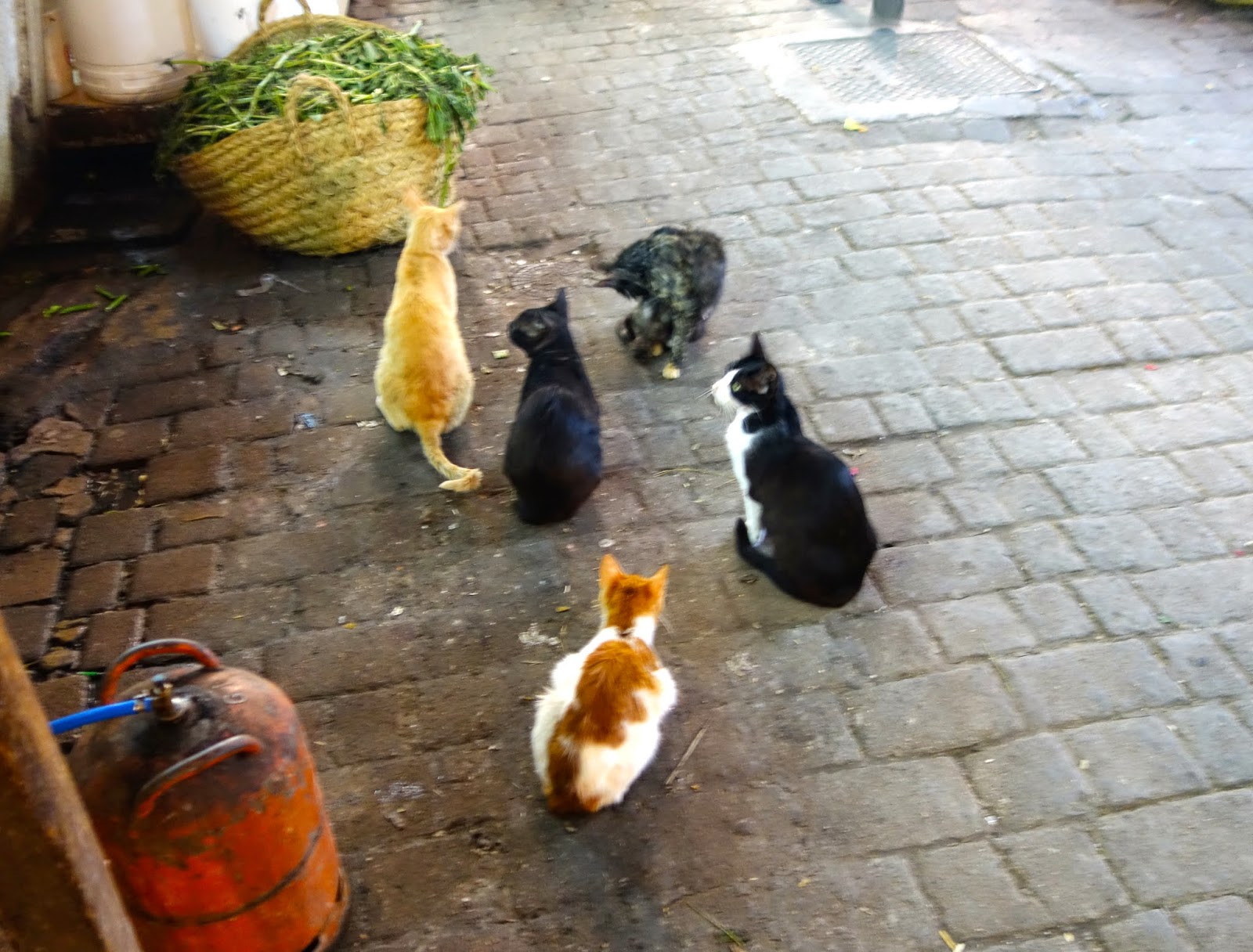 We finally got back to our riad, and we decided to go to the roof and get one last aerial view of Fes.  We got this nice view of the Merenid tombs, where we were the night before, watching the sun set over the medina. 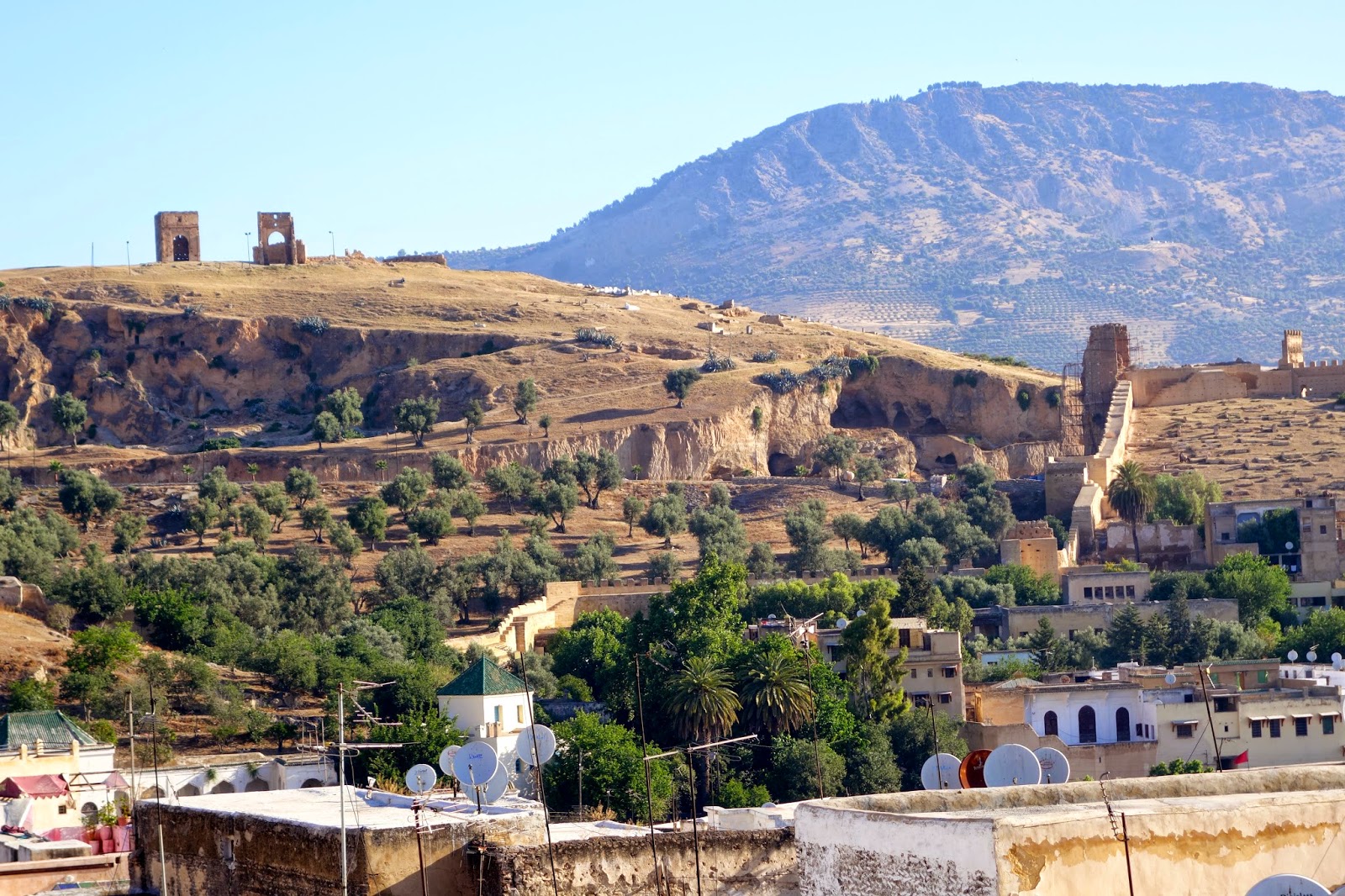 Ruby joined us, and I got some beautiful photos of her. 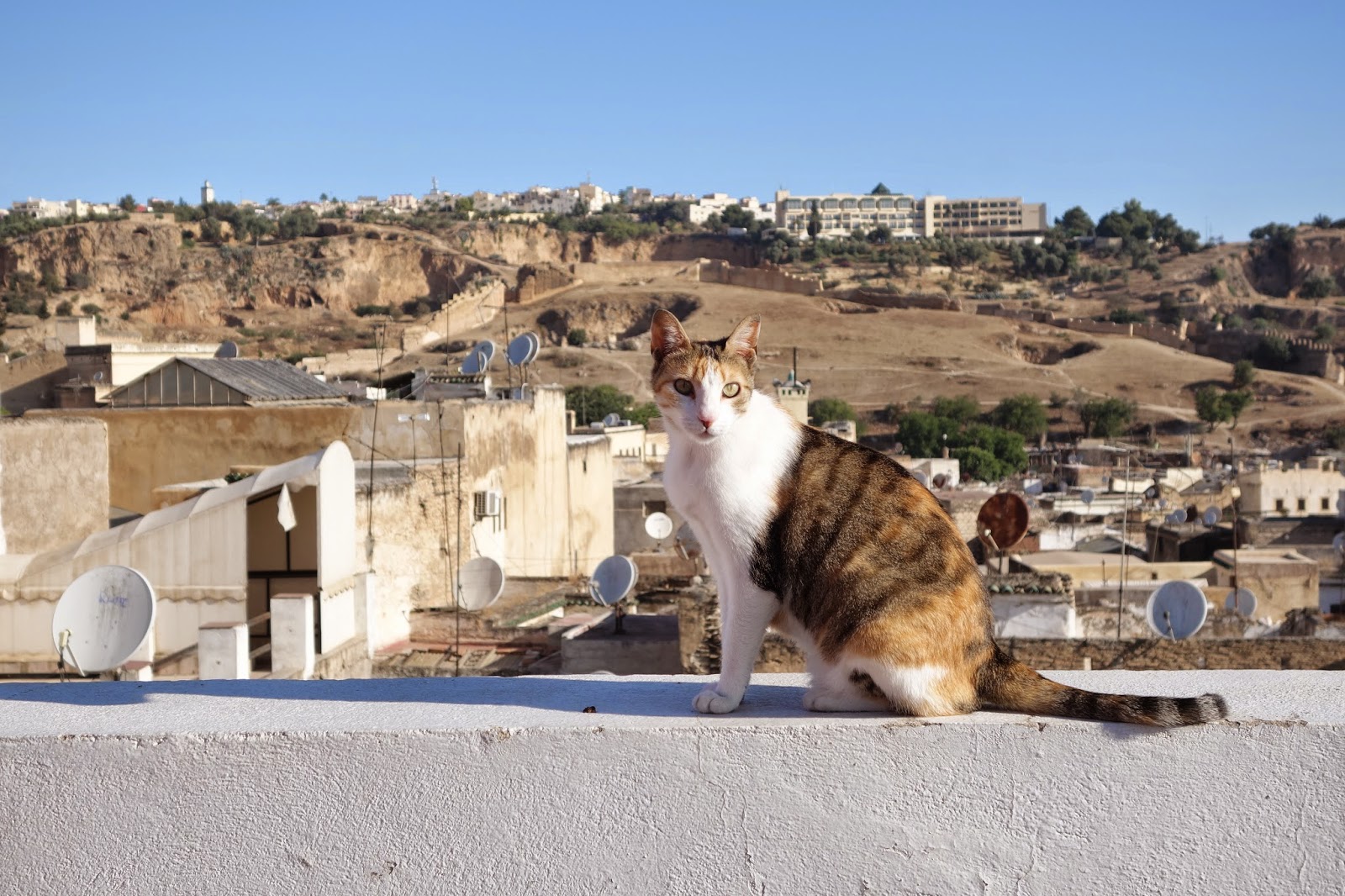 My favorite was this one, with her looking so majestic. 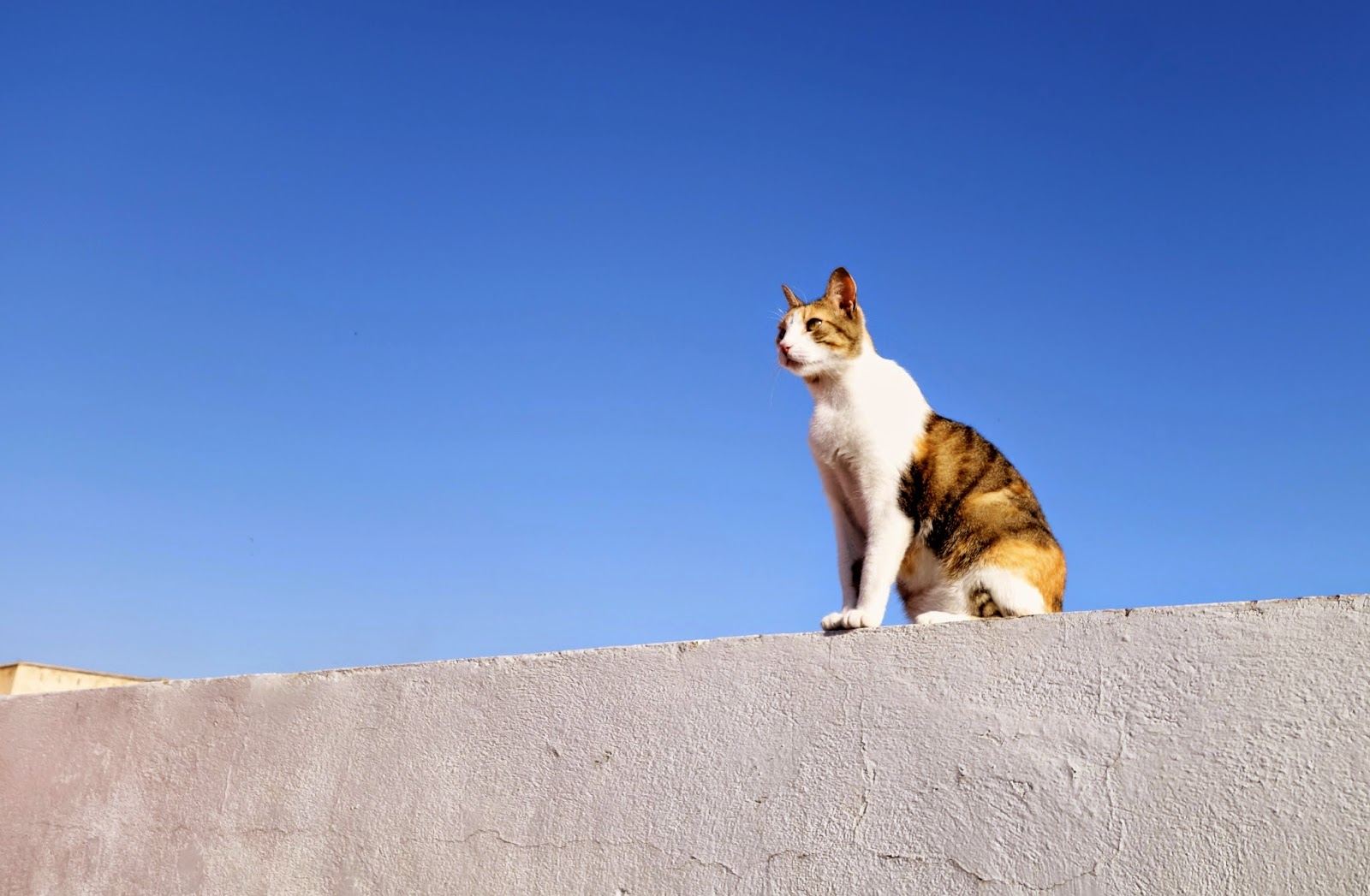 You can see that we had some special bonding moments on the rooftop. 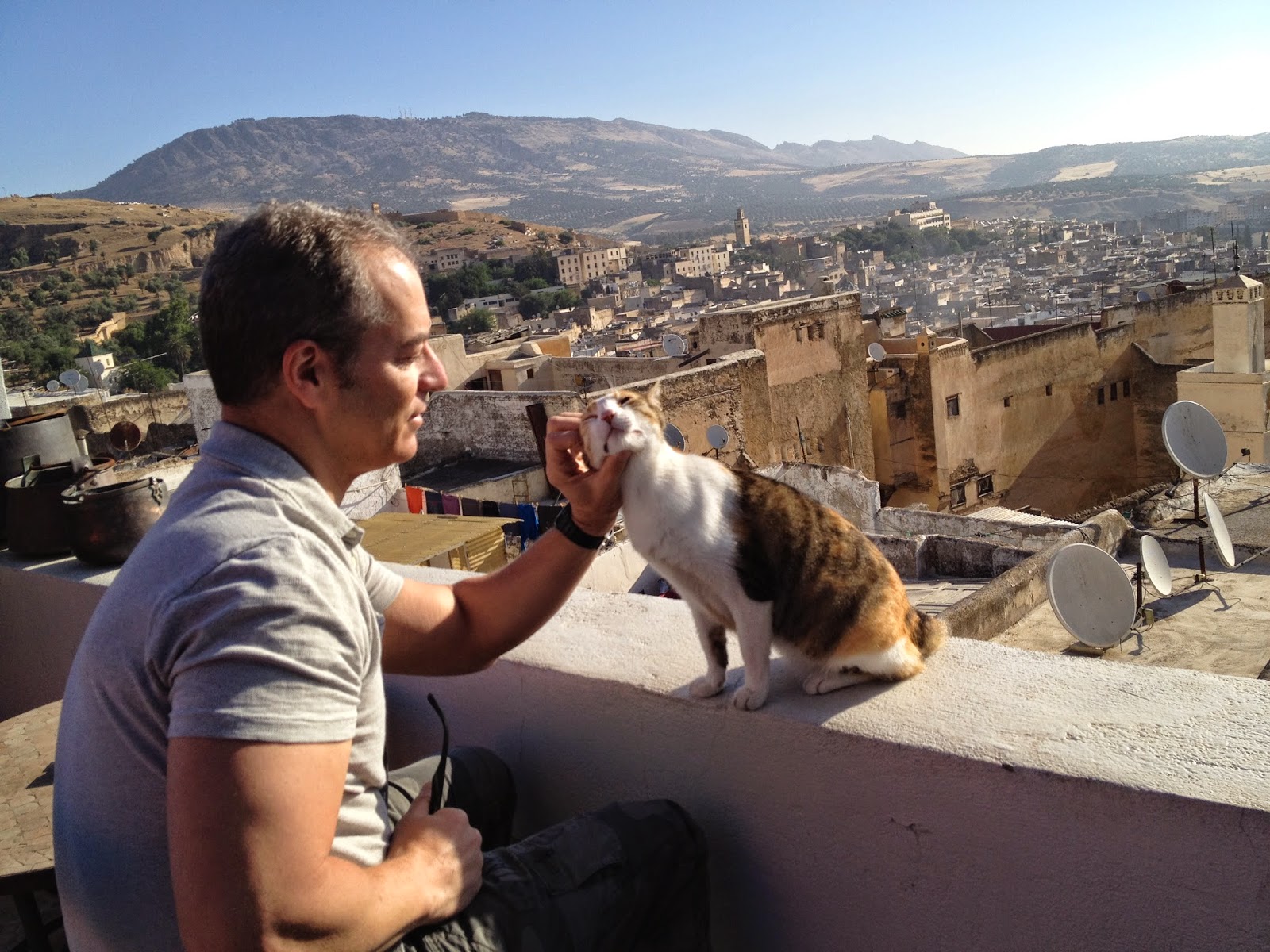 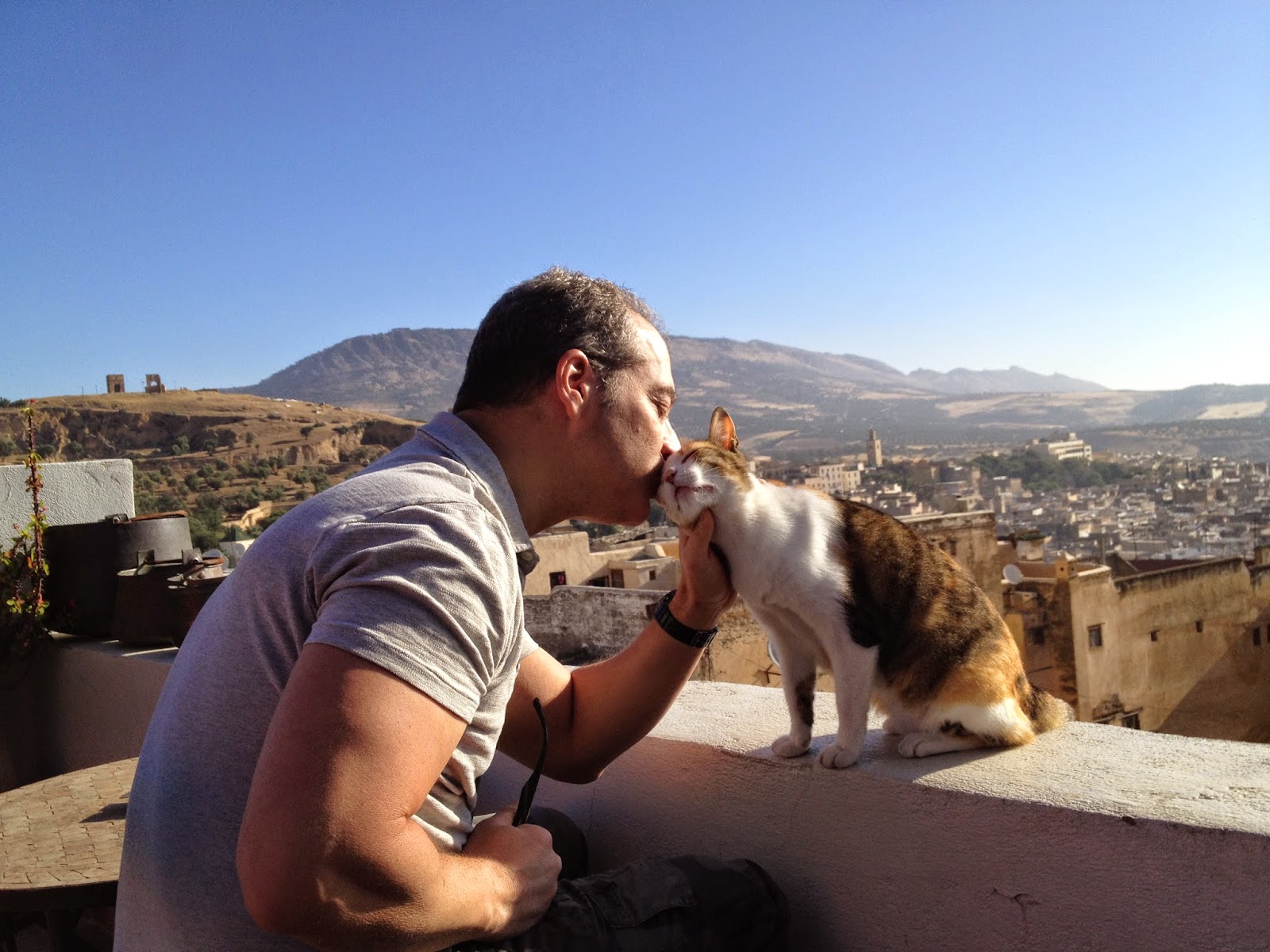 We went to The Clock Café for our last meal in Fes.  Tomorrow, new horizons await us in Tangier.
Continue to Day 9
Tags: Cats, Friends, Mark, Morocco, Musings, Photography, Travel