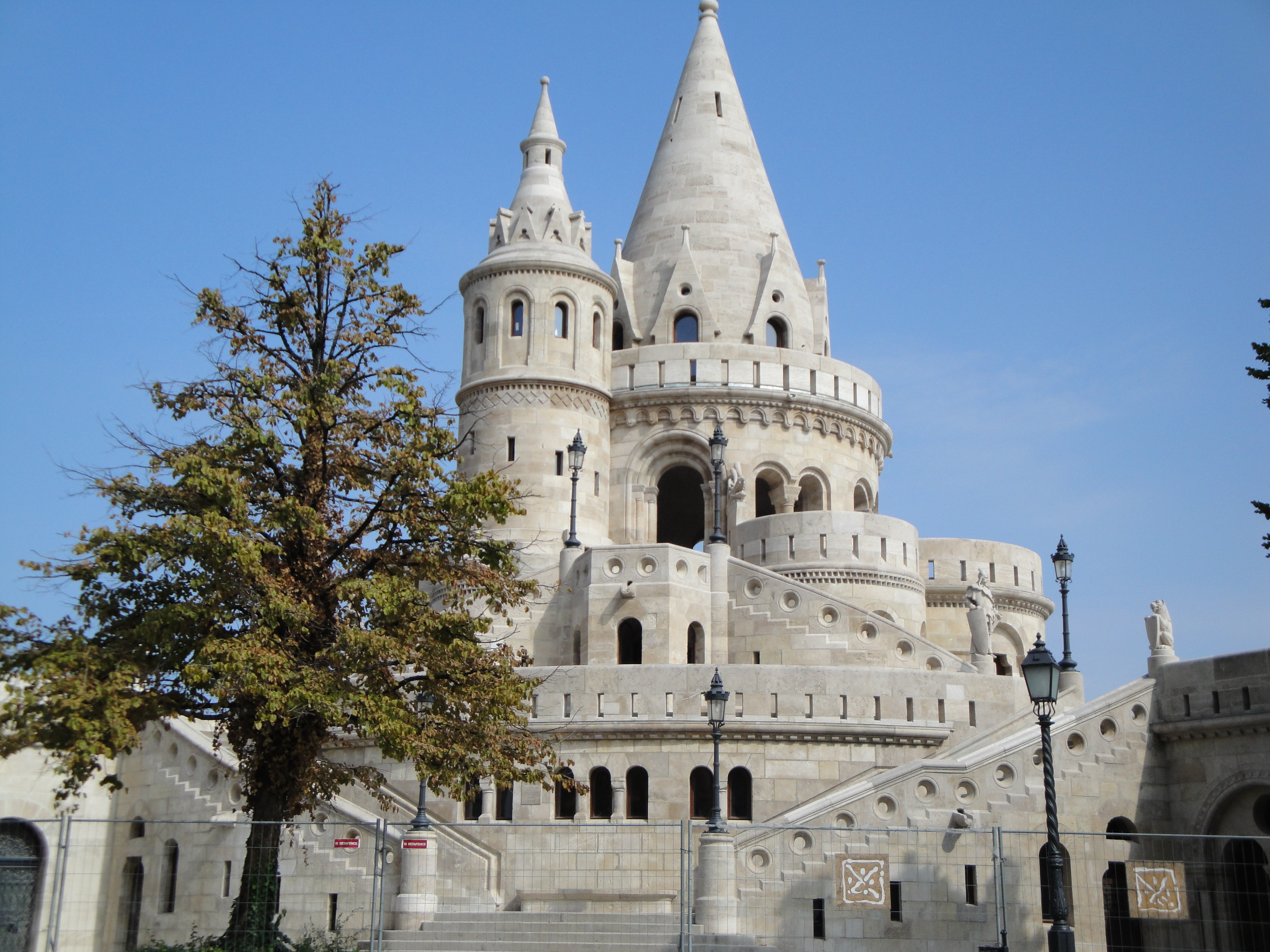 As it turns out, arriving late was not a disaster, because the weather in Budapest was horrible. Despite the steady downpour, we decided to make the best of it, and grabbing our umbrellas, we left our perfectly-located hotel and strolled over the modern Elisabeth bridge to Gellert Hill.

The climb up Gellert Hill was exhausting, but we were rewarded with an amazing view of the Danube,

the bridges that span it, and the city of Pest.

After admiring the view for another half hour or so, we made our way down the hill slowly and gravitated toward the Gellert Baths, where we experienced a luxurious bath experience in a truly elegant setting. After a four hour delay, an eight hour flight, very little sleep, and being cruelly rained on, a leisurely soak in a scorching 38 degree Celsius thermal bath is just what the doctor ordered. After that, it was off to stroll the Danube embankment, Pest’s breezy riverfront promenade. We made our way to Spoon, a restaurant located on a boat moored in front of the Intercontinental hotel, and had a great meal. I skipped dessert at the restaurant, and made my way to Gerbeaud, the most famous café/pastry shop in Budapest, where I had a heavenly bowl of vanilla ice-cream with chestnut puree.

Then, back to the hotel, where I slept like a dead man. The following day (Friday), despite the ominous warnings on the Weather Channel’s website, it was beautifully sunny. On the agenda was an exploration of the Jewish quarter and a tour of Parliament. The Jewish quarter was close to the hotel, and we were soon at the Great Synagogue, the second largest in the world. The architecture was amazing, but to my dismay, the synagogue was closed for Rosh Hashannah. (Ooooh, our train is just leaving the station…Vienna, here we come!). I strolled the rest of the Jewish quarter, taking in some stunning monuments and intriguing buildings.

Next, we were on our way to Parliament. The building is Gothic, but has a Renaissance dome on top. A real mish-mash of architecture, but amazing nonetheless. As (bad) luck would have it, the 12:00 and 2:00 tours were cancelled, as some type of diplomatic function was going on. The building would open at 3:00, we were told. It was only 12:00 noon; I wasn’t going to wait 3 hours. So, off we went to visit some prominent statues and memorials in the area. This included a contemplative statue of Imre Nagy, the hero of the 1956 Uprising, a statue of the pensive Attila Josef looking over the Danube, a popular modern poet who committed suicide at the age of 32. The most striking monument was the relatively new Holocaust Monument, consisting of 50 pairs of bronze shoes lining the embankment of the Danube. The monument commemorates the Jews who were killed by the Arrow Cross, the Nazi’s puppet government, when they came to power in 1944. Many Jews were massacred right on the embankment; they were shot, their bodies falling into the freezing Danube.

Next on the agenda were several picturesque squares. We strolled from Deak Square, to Erzsebet Square, to Vorosmarty Square, the most popular of the three. After photographing the statue of the lions keeping guard over the fountain, and another very cool statue of Mihaly Vorosmarty, Hungary’s favorite poet and patriot, we strolled down Vaci utca, the hopping pedestrian boulevard and tourist magnet.

At the end of the street we arrived at the Great Market Hall, a colorful Old World mall with lots of stalls selling souvenirs (including mountains of paprika, packaged every way you can imagine), and food stalls. Back to the hotel to rest up, shower, and then off to St. Istvan Basilica, for a classical music concert, then dinner at a wonderful outdoor cafe in St. Istvan’s square. Saturday was our last full day in Budapest, and the agenda was ambitious. We started with another quick stroll along the Danube embankment, to the beautiful Chain Bridge. The bridge is lovely, and a stroll across is great fun, very much like a stroll across the Brooklyn Bridge. On the other side is a funicular that takes you to the top of Castle Hill. At the top of the hill is the Turul, a big bird statue. The Turul is the mythical bird of Magyar folktales who watches over the royal palace. The Turul supposedly led the Hungarian migrations in the ninth century. He dropped his sword in the Carpathian Basin, indicating that this was to be the permanent home of the Magyar people. After photographing the big bird, we were off to explore the royal palace, and photograph some amazing statues, including the truly marvelous King Matthias Fountain.

After strolling the palace grounds, we passed Sandor Palace (the official residence of the President), the National Dance Theater, the Ministry of War, Disz (Parade) Square, and arrived at Fisherman’s Bastion, a fantasy rampart offering wonderful views over the Danube, to Pest. The seven towers on the rampart represent the seven Magyar tribes. After that, we went inside the Matthias Church, a landmark neo-Gothic church that was unfortunately undergoing extensive exterior renovations, so much of it was covered by scaffolding.

We took the funicular back down to the Chain Bridge, and headed over to Andrassy Ut, Budapest’s main boulevard, lined with shops, theaters, and cafés. Budapesters like to say it’s like the Champs-Elysees and Broadway rolled into one. Having strolled on both, I’d say that’s stretching it a bit, but it is a very beautiful street, with some fantastic architecture and many points of interest, including the Postal Museum, the gorgeous Hungarian State Opera House, leafy and serene Franz Liszt Square, the fascinating (and disturbing) House of Terror Museum (the former headquarters and torture site of the Nazis and communist secret police), and the breathtaking Heroes Square, which marks the end of Andrassy Ut. This square is a mammoth tribute to many of Hungary’s historic figures. Behind Heroes Square is City Park, a lovely 300 acre park that is Budapest’s backyard. The park contains a zoo, a replica of a Transylvanian castle, an amusement park, and the famous Szechenyi Baths. In my past travels, big parks like this have been a good source for catspotting, and I met some great cats in parks like this in Buenos Aires, Santiago, and Bangkok. We spent a good three hours in the park, relaxing on benches by the lake, strolling through the castle (it’s actually a collection buildings designed to look like a castle), and meandering through tree-lined paths, but alas, no cats. We ended our park adventure with dinner at Robinson, a restaurant stranded on an island in the park’s lake. I had made reservations by e-mail about two months beforehand, asking for a lakefront table. They proceeded to lead us to what was the absolute best table, overlooking the peaceful waters, upon which a few ducks were quietly drifting. It was a fantastic way to spend my last night in Budapest. This morning, we awoke early and tried to squeeze in a few sights before heading to the train station. We took the metro to Liberty Square, one of Budapest’s most picturesque squares. Most Budapesters are still in bed on a Sunday morning at 8:30, and we had the entire square to ourselves. The buildings surrounding the square are architectural masterpieces, and I stood there with my camera, mouth agape. After taking many photos, and admiring more monuments, we decided to stroll to the Jewish quarter once more, to see if we could get into the Great Synagogue.

Sadly, again it was closed to tourists. With an hour left to kill, we headed back to Gerbeaud, where I had a cup of hot chocolate that was as thick as pudding, before taking a cab to the train station. And so, the Budapest part of the trip comes to a close. No kitties to speak of (unless you count the stray I saw peering out from under a car in the Jewish quarter. The photo I took actually came out pretty nice). Maybe I’ll have better luck in Vienna. According to my watch, we’ll be there in less than two hours.