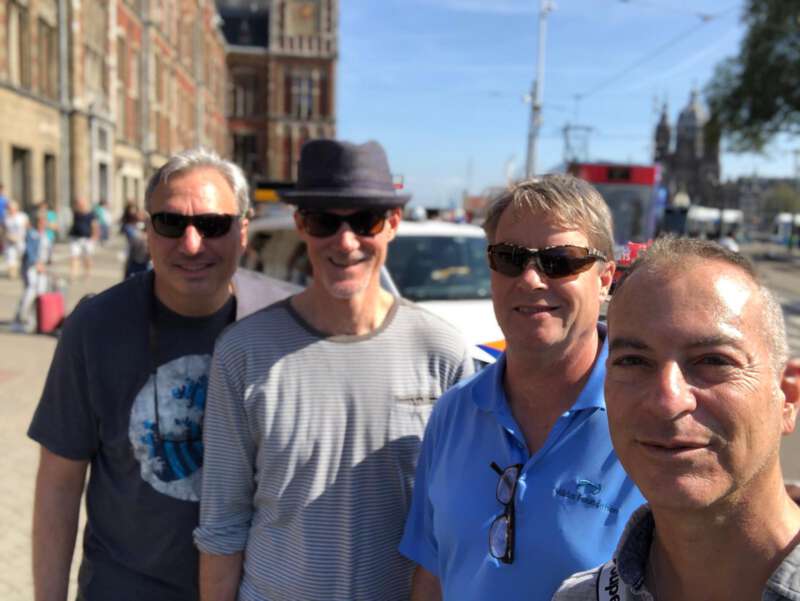 It’s Tuesday in Amsterdam. In two more days, four of my college buddies fly across the Atlantic to join me for five days of eating, drinking, exploring, laughing, and reminiscing about the good old days, i.e., our days together at SUNY Binghamton, back when life seemed like one continuous party. Forty-one years have passed and we’re still good friends, and not for a minute is it lost on me just how fortunate I am, not only to have friends of such caliber, but that our lives are still autonomous enough so that we’re able to convene on another continent, in my favorite city on Earth.

Three years ago, by some miracle, all seven of us Men of the Woods (as we call ourselves) were able to coordinate our schedules, allowing us to rent a lovely house in Woodstock, New York for a few days of camaraderie. Sadly this time, two of the group – Mike Cuda and Jimmy – weren’t able to swing it. I think it’s still quite an amazing feat, to get this many of us together on another continent.

Today is a beautiful day – sunny, breezy, clear. My post-retirement obsession with parks has become transatlantic and, just as in New York, I have my roster of parks that I visit based on my mood that day. For people-watching, Vondelpark is the place to be. For more solitude, I like Westerpark. For dog-watching, it’s Sarphatipark. Today I’m in the mood to commune with nature, and Oosterpark is where the bike takes me. Just as I’ve done in New York, I’ve scouted out most of the benches in these parks, and I have definite favorite benches in each.

I was a bit late in discovering Oosterpark. The eastern part of Amsterdam has an air of mystery, and remains largely unexplored by me. On my last two visits to Amsterdam, however, I stumbled upon this park unexpectedly, and soon came to realize that it was much prettier than any park I had visited here. There are several beautiful lakes and ponds, many interesting birds, lots of dogs, cute bridges and walkways, and quirky little artworks scattered amongst the grassy fields and pathways. This afternoon, I quickly found the park’s beautiful central lake, and then biked toward the southern bank. The brass statue of the guy riding the goat is my landmark. As the statue came into view, I was slightly disheartened to see my bench occupied by a guy and his dog, a Saluki. This is the fourth Saluki I’ve seen on this visit to Amsterdam. For some odd reason, they’re quite popular here. Most of the benches in the vicinity were also occupied, not surprising, given the weather. Fortunately, I found an unoccupied bench on the eastern edge of the lake that not only afforded a lovely view, but also allowed me to see the Saluki and his owner in my peripheral vision. If he decides to leave, it would take a mere 30 seconds for me to bike over there. I parked my bike next to me, took my seat, and ripped open a dark-chocolate-and-hazelnut candy bar I’d stashed in my bag. I’d been craving chocolate for the last hour. As I popped the last bite into my mouth, Saluki guy abandoned the primo bench, which is where I am right now as I type this.

Buying an apartment here in Amsterdam was definitely one of the boldest moves I’ve made. When Mark and I discussed buying here, our conclusion was the same, but our motivations differed. I was (and still am) enthralled with this city, and I was heady with the thought of having our own place here. It’s an unquestionable sign that you have made a commitment to the city. Mark certainly likes Amsterdam, but not with the same affection that I have. His primary justification for us buying a place was that it would be an excellent investment, given Amsterdam’s popularity and the city’s scorching real estate market. An additional, more personal motivating factor for getting a place here was to be able to offer my friend Brad more opportunities to visit here, and provide a safe, cool place for him to stay. Brad’s marketing savvy was a significant factor in my cat hospital’s success, allowing me to attract the ideal buyer and enabling me to live this leisure commando life that I so enjoy. A few years ago, I surprised him by taking him here for a brief vacation, triggering in him a fondness for the city that equals (and probably surpasses) my own. Mark loves the idea of Brad looking after the apartment when we’re not using it, and I derive much satisfaction knowing that I’m helping enrich the life of one of my best friends.

Although everyone here speaks fluent English as well as Dutch, I decided to take Dutch classes so as to feel more assimilated into Dutch society while I’m here. Although het hoeft niet (it isn’t necessary), knowing how to understand signs, posters, and flyers, comprehend weather reports and newspaper headlines, read a menu, and greet, compliment, and thank people in Dutch has enhanced my enjoyment of the city significantly. Language classes are offered every six months, as a two-week intensive course. For my first course last winter, I opted for the student housing that the course offered. Two months after that, we purchased the apartment. When I took the next class in the summer, I now had my own place to stay, which was thrilling. Last winter, I didn’t enroll in the next level. On this trip, although I wanted to, I didn’t take the next level because it overlapped with the days that my college friends are here. That’s my own stupid fault. I didn’t check the class schedule until after my friends and I chose the best date for the trip and they reserved their flights. I did, however, renew my subscription to the online version of the course, and I also purchased the new textbook for the class. My plan is to keep my head immersed in these language videos and lessons for the next four months, and then take the class in January.

When we purchased the apartment, I envisioned friends visiting me in Amsterdam and that my apartment would be a revolving door. I suppose everyone who buys a vacation home in another country imagines the same thing. In reality, though, I think that rarely happens, as people have busy lives and not everyone has the time or resources to come visit.. Winter isn’t the ideal time to visit Amsterdam, so most visits would likely be limited to the summer. The current summer is the second summer that we’ve had the apartment, but the first, really, where the apartment is fully furnished and ready for guests. Happily, I’ve managed to fill it with visitors this summer. My first official guest was my good friend Robb. I met Robb in Baltimore in 1997, soon after my marriage had ended and I had come out of the closet. In 1998, I decided to take my first international trip, and I chose Amsterdam, based on an article that I had read about the Gay Games, which was being held there. Robb drove me to the Baltimore airport. Fast forward 21 years: Instead of taking me to the airport, Robb took himself to the airport and boarded a plane for his first visit to Amsterdam. We had planned this trip for a few months; he purchased the ticket back in March, at my urging. We’ve traveled together before – a trip to San Juan, Puerto Rico, and a trip to Puerto Vallarta, Mexico – and had a great time. We seem to travel well, despite the fact that we have pretty much nothing in common, and now that I have an apartment here, the trip becomes super affordable, and I know the city (and Robb) well enough to plan an excellent itinerary. On July 29th, I picked him up at the airport, for six days of sightseeing and socializing. In my next post, I’ll share the details of Robb’s fun visit.