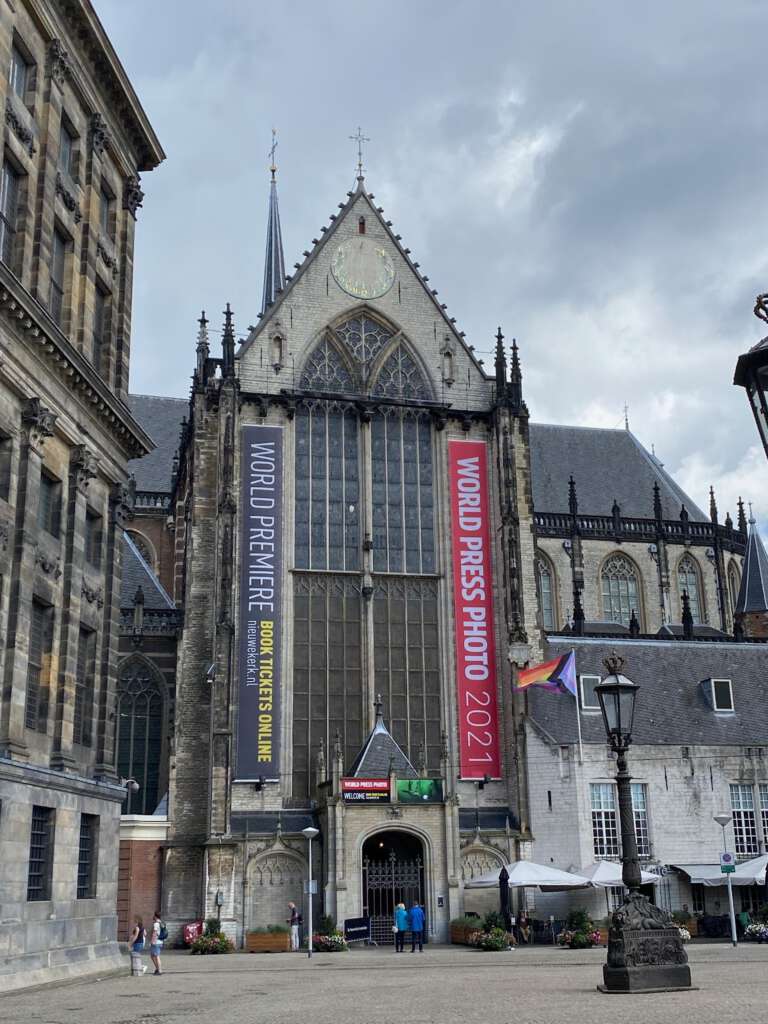 I spent the month of August, 2021, in Amsterdam, and I got very lucky with the museum exhibits.  I love photography, and I always visit FOAM and Huis Marseille, the two photography museums in Amsterdam.  This time, in addition to these two museums, I got to see two great photography exhibits at other museums – the Fred Stein exhibit at the Jewish Historical Museum, and this exhibit, the World Press Photo Exhibition 2021 at the New Church.

I got there just in time.  The exhibit ran through August 29th, so I was there during the final month.

I love visiting the New Church.  I still find it amusing that even though it was built in the 1400s, it’s still the “new” church, because it’s new when you compare it to the Old Church, which is a short walk away. It was built in the 1300s and is the oldest building in Amsterdam.

The previous year was pretty unprecedented.  Besides the pandemic and social justice issues, the world was marked by other urgent issues like the climate crisis, LGBTQ rights, and global territorial conflicts.

The photos on display were absolutely amazing. If I showed you all of them, this post would be enormous.  Instead, I edited it down to the photos that captivated me the most.

This one is pretty incredible.  This is titled “A man and woman disagree on the removal of the Emancipation Memorial, in Lincoln Park, Washington DC, USA, 25 June.”

The Emancipation Memorial shows President Lincoln holding the Emancipation Proclamation, with one hand over the head of a Black man kneeling at his feet.  Some critics argue that the statue is paternalistic and demeaning in its depiction of Black Americans.  They say that it doesn’t do justice to the role that Black people played in their own liberation.  The Black Lives Matter activists were in favor of removing the monument.  Those opposed to removing the monument say that the statue is a positive depiction of people being liberated from slavery, and that you’re erasing history when you remove monuments like this.

Photos in which things are juxtaposed tend to be stronger photos.  They really make you think.  Well, you can’t get any more contrasty than what’s going on in this photo.  Male vs female.  Black vs White.  Masked vs unmasked.  Young vs old.  Wanting to engage vs not even wanting to listen.   It’s all here, in one superb photo.  It’s no surprise that it was nominated for photo of the year.  (It got first prize in the “hard news” category, but it wasn’t the ultimate winner.)

Covid was a big topic, of course.  This photo, titled “A doctor stands at the end of her shift, the marks left by a protective mask and goggles clearly visible on her face, in Mexico City, Mexico, on 19 May.”

In November 2020, Forbes magazine ran a survey on Covid infections among healthcare workers, and Mexico reported the highest per capita rate in the world.  Mexico’s president, Lopez Obrador initially played down the severity of the threat from Covid, but once cases started to climb, a lockdown went into effect.  As soon as case numbers dropped a little, the president declared it under control again. On May 13th, the country reported their deadliest day (353 deaths).  Less than 24 hours later, he announced an easing of lockdown measures.  Healthcare workers were frustrated and exhausted, and this photo captures it perfectly.  (This won 2nd prize in the portrait category.)

In keeping with the Covid theme, we have the first prize winner for the general news category, entitled, “Rosa Luzia Lunardi (85) is embraced by nurse Adriana Silva da Costa Souza, at Viva Bem care home, Sao Paolo, Brazil, on 5 August.”

In March, care homes across the country had closed their doors to all visitors as a result of the COVID pandemic, preventing millions of Brazilians from visiting their elderly relatives.  Physical contact with the vulnerable had to be kept to a minimum.  At Viva Bem, a simple invention, ‘The Hug Curtain’, allowed people to hug each other once again.  This was the first hug Rosa had received in five months.

And then, you have my favorite.  The one that moved me the most.  It’s called “Marion (24), who has metastatic cancer, embraces her son Ethan (7) in the presence of Peyo, a horse used in animal-assisted therapy, at a palliative care unit in Calais, France, 30 November.”

Pet therapy is used in psychological therapy and in palliative care, because animals reduce anxiety and stress.  They also have physical effects, like lowering blood pressure, improving heart rate, and helping in pain management.  In hospice situations, the aim is to use the bond between animals and people to provide comfort, peace, and companionship.  Horses are very in tune with their surroundings and with people, so they’re well suited for palliative care.

The woman in this photo has had a rough life, I suspect.  She’s 24, and that’s her 7 year old son, so she gave birth to him at age 17.  I don’t know for sure, but I suspect she’s a single parent.  She’s in hospice, and you can see the toll that her cancer has taken on her.  She’s skeletal.  In this photo, she derives comfort from her son and this wonderful horse, who gently puts his lips on her arm.

I stood in front of this picture for a long time.  A woman stood next to me and looked at it, too.  I said to her, “I’m a veterinarian.  Everything I stand for, and everything I believe in, is right here in this photo.”  She gave a very understanding nod.  Technically, it may not be the most skilful photo in the world, but in terms of emotional impact, you can’t get any stronger.

I hope the New Church presents the contest winner here every year.  It’s a great venue, and although I don’t need any more incentive to come to Amsterdam, this exhibit definitely adds to the desire to be here.