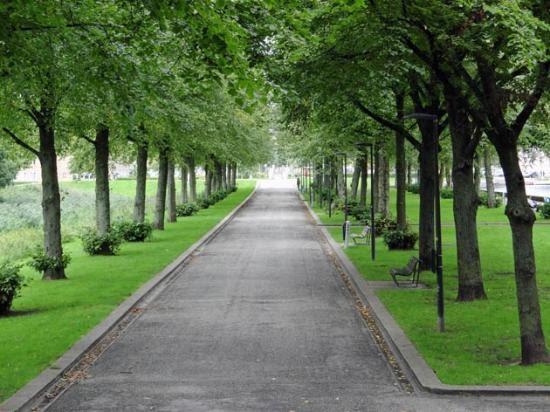 The Parks of Amsterdam – Erasmuspark

I’ve visited Amsterdam many times over the past 20 years, and going to parks is a favorite activity of mine when I’m there, but I’ve managed to somehow miss this park over the years.  Like most tourists, I tend to stick to the most popular parks – Vondelpark, Westerpark, and Oosterpark.  Well, now that I’m not a tourist, I figured it’s time to see the others.  I’m surprised I managed to somehow avoid stumbling upon this park, given its location, between Westerpark and Rembrandt Park.  It’s not all that far from the Centrum.  You’d figure I’d have stumbled upon it at some point.

Erasmuspark is named after the famous Dutch theologian Desiderius Erasmus. He was also a philosopher, author, and Catholic priest.  The park is known for its nice flower beds, and I did bike through them, but for some reason I didn’t take any photos.  That was dumb.  There’s also a football pitch (i.e. a soccer field) in the main part of the park.

The park is unique in that it is completely surrounded by a canal.

There are lots of nice walking paths.

I strolled through the park on a lovely path, until I found a quiet bench that overlooked a nice part of the canal.

I was going to read my book, but I saw an interesting bird, and I spent my afternoon looking at it instead.

At first I thought it was an egret.

Wait… is that an egret or an ibis?

Somehow, this dumb bird had me mesmerized.  I took a few pics, and then edited them on my phone with my Snapseed app.  Here were the two edits I liked the most, although in retrospect, they may be a bit dark and overly contrasty.  I’m not sure:

This is a pretty low-key park.  It’s very quiet, and there are lots of places where you can find seclusion and solitude.  I definitely plan on spending more time here next time I visit Amsterdam.