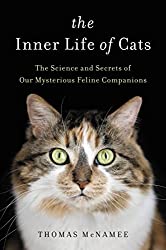 Quick Book Review: “The Inner Life of Cats: The Science and Secrets of Our Mysterious Feline Companions” by Thomas McNamee

As a cat veterinarian, I’ve spent most of my adult life trying to diagnose and treat the many physical ailments, and address the myriad physical issues, that afflict cats. As for their mental state, that’s always been a challenge and a mystery, and I was hoping this book would give me a little more wisdom in this area.  It turned out to be a charming and interesting book, but I think the title was a bit misleading.  The book really didn’t talk much on the “inner lives” of cats, in terms of their motivations and thoughts, which was disappointing.  Nevertheless, the book is very engaging, mostly because of his very charming tale of the author’s adoption of Augusta, a kitten he found in the snow near his Montana ranch.  Personally, I disagreed with his decision to let his cat go outdoors despite the dangers of snakes, coyotes, and other predators/hazards that he readily admits were a problem in their area. He also makes no mention of the risks of contracting/spreading the feline leukemia virus or the feline immunodeficiency virus. His comments about feline nutrition were a bit superficial and throw-away, and his interpretations of some of the medical issues his cat began to experience weren’t technically correct.  Regardless, the book was still a nice read, mostly because it was mostly just a love letter to his cat Augusta, and his relationship with her was endearing and heart-warming.  If you’re looking for a book about feline psychology and behavior, you might be disappointed.  If you want to learn a lot of interesting facts about domestic cats and feral cats, and hear about the charming and fascinating antics of his cat Augusta (including the frank, emotional story of her physical decline as she became elderly), then go for it.

“The Inner Life of Cats: The Science and Secrets of Our Mysterious Feline Companions” by Thomas McNamee