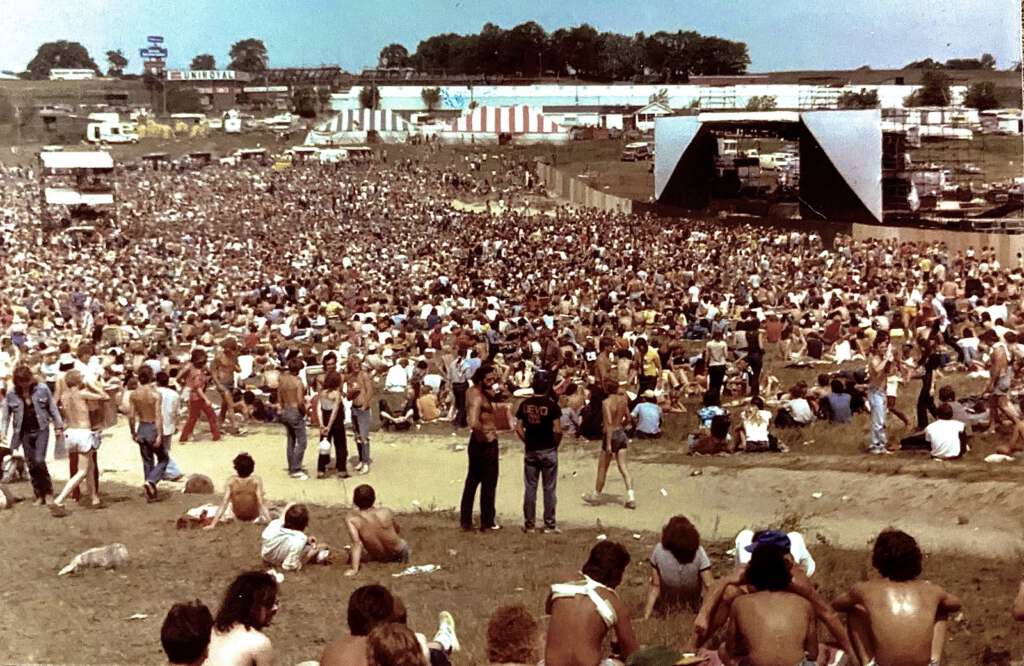 Just about 40 years ago, on a hot summer Saturday, I attended one of the best concerts ever.  Despite the incredible lineup of performers, it still remains relatively obscure.

In the early summer of 1980, I was told about an outdoor concert that was to take place in Toronto in August.  Billed as a “Punk Woodstock”, “New Wave Woodstock”, or as the poster said, “The 1980’s Big Beat Rock and Roll Party”, the festival was called Heatwave. The band line-up was the cream of the post-punk new wave crop: The Clash, Elvis Costello, Talking Heads, The Pretenders, Rockpile, and the B-52’s, as well as local Canadian favorites Teenage Head and The Kings. The timing couldn’t have been more perfect.  It was summer, kids were out of school, and new wave music was really hitting its stride.

Being a crazed punk and new wave fan, there was no way I was going to miss this concert. I told two good friends, John and Chaz, about the show and they were definitely interested in going.  Being college students of meager financial means, we decided to hitchhike from New York City to Toronto. I don’t remember much about the hitchhiking, but I remember us arriving in Toronto on August 22nd, the day before the concert. Our ride dropped us off on the side of the road and pointed us in the direction of Mosport Park, the site of the concert. We trudged for what seemed like miles, until we spotted the other diehards lining up at the entry gate.

We stood in line for a while, and I thought that it would suck if we had to wait in line all night. Fortunately, they let us onto the field around midnight, where we secured our spots on the grass for the concert. Many folks started drinking and partying with their friends, but eventually, things got quiet and most of us fell asleep on the grass. At 7:00 a.m. sharp, we were all rudely awakened by the sound of dozens of alarm clocks blaring over the sound system. They were testing the speakers by waking us all up with Pink Floyd’s “Time”. The park steadily got more crowded as the afternoon wore on, and there was a great feeling of camaraderie.

John took this photo of me at the concert

The first four bands weren’t very memorable.  The opener was Vladymir Rogov and Arkitex, followed by Teenage Head (popular in Canada, but I had never heard of them), BB Gabor, and Holly & The Italians.  John had brought his camera with him, but he decided to not waste his film on these bands.  Remember, this was way before digital cameras and cell phones. Film was expensive.  He did waste one shot on this random punkette in the crowd.

The fifth band to play was Rockpile.  I was into Nick Lowe at the time; his album Pure Pop for Now People was terrific and I had played it to death, so I was excited to see Rockpile.  Their set list was:  Sweet Little Lisa, So it Goes, I Knew the Bride (When She Used to Rock and Roll), Queen of Hearts, Switchboard Susan, Trouble Boys, Girls Talk, Three Times Loser, You Aint Nothing but Fine, Crawling From the Wreckage, Let it Rock, Singing the Blues, I Hear You  Knocking, They Called it Rock, and Ju Man, with Down Down and Let’s Talk About Us as an encore.

I had the album Stiffs Live at home.  It was a live recording of artists on the Stiff record label, which included Nick Lowe.  On that album, he performs a song called “Let’s Eat” which I really like.   At the Heatwave concert, I wrote the word “Let’s” on a paper plate, and “Eat” on another paper plate, in black magic marker.  I have no idea where I got the plates or the marker.  As Rockpile was finishing a song, I held up the plates.  Nick looked out into the crowd, saw my plates and yelled “Let’s Eat!!!”  They didn’t play the song, though.  Years later, I found a recording of their set online, and sure enough, you can hear Nick scream out “Let’s Eat”.

Attendance at the concert was initially pegged at 85,000.  A local radio station was covering the show backstage.  Dan Aykroyd, in character as Elwood Blues, joked to the promoter that he should put everyone listening on the radio on the guest list.  The promoter jokingly said okay, and within 90 minutes, another 15,000 fans with no tickets showed up at the park trying to get in.  The promoter relented, and these lucky listeners got in for free.  Not that it was an expensive ticket: $20 for all of these bands!  (Well, $20 in advance, $25 at the door. Sigh. Those were the days.)  The final crowd estimate, in most articles that I’ve read, is 100,000.

As the majority of those 15,000 ticketless fans descended on the concert, The Pretenders hit the stage.  They played a full, excellent set.  Here’s their set list: Precious, The Adultress, Kid, Space Invader, Private Life, Brass in Pocket, Stop Your Sobbing, The Wait, Louie Louie, Porcelain, Tattooed Love Boys, Up the Neck, and Mystery Achievement.  I’m lucky to have seen this version of the band, while they were at their peak.  In June of 1982, their excellent guitarist, James Honeyman-Scott, would be dead of a cocaine overdose, and then in April of 1983, bass player Pete Farndon would also be dead, from heart failure brought about by (wait for it…) cocaine.

Next came the Rumour (without Graham Parker, who had left the band by that time to go solo).  I don’t remember their set at all.  The album Squeezing Out Sparks by Graham Parker and the Rumour was another one of my favorites, but nobody was really interested in the band without their lead singer, me included.

After the Rumour came The B52s.  John was a big fan of theirs.  He had their single Rock Lobster, which he played often.  I borrowed it and taped it (taping music onto cassettes was big back then).  I loved the B side (52 Girls) a lot, too.  Then their first album came out, and we listened to it non-stop, so we were psyched to see them play.  The night before the concert, while standing in line at the entry gate, I noticed that the guy ahead of me in line was holding a record album.  I looked and saw it was The B52s album Wild Planet!  I had no idea that they had recorded and released a second album.  I asked to see the album, and I distinctly remember being amused at the song title “Quiche Lorraine”.  The B52s set list:  Planet Claire, 6060-842, Devil in My Car, 52 Girls, Quiche Lorraine, Dirty Back Road, Lava, Give Me Back My Man, Strobe Light, Private Idaho, Running Around, Rock Lobster, Dance This Mess Around, and Party Out of Bounds.  The outfits worn by the women in the band (Kate and Cindy) were pretty striking, as was their hair, and John took a bunch of photos.

The sun began to go down, and next up was Talking Heads.  They had just finished recording Remain in Light, but hadn’t released it yet.  They expanded their band to be able to play those funky new rhythms, and this was their first live show with the expanded band, the one that you saw in the film Stop Making Sense.  They played these songs:  Take Me to the River, Psycho Killer, Warning Sign, Stay Hungry, Cities, I Zimbra, Once in a Lifetime, Houses in Motion, Born Under Punches (The Heat Goes On), Crosseyed and Painless, and Life During Wartime.

The headliner, Elvis Costello and the Attractions, took the stage next.  They were great, and they played a ton of songs:  Shot With His Own Gun, Accidents Will Happen, The Beat, Temptation, (What’s So Funny ‘Bout) Peace, Love, and Understanding, Mystery Dance, Green Shirt, You’ll Never Be a Man, (I Don’t Want to Go to Chelsea), Secondary Modern, Pump It Up, Lover’s Walk, Less Than Zero, Big Tears, High Fidelity, Lipstick Vogue, Radio Radio, I Can’t Stand Up for Falling Down, Alison, Clubland, Oliver’s Army, Watching the Detectives, and You Belong to Me.

The Clash did not attend the concert. The story was that they insisted that they get top billing, and when Elvis Costello got top billing, they pulled out.  Is this story true?  Who knows?

Although Elvis was the headliner, he wasn’t the final band to perform.  Local favorites, The Kings, played an hour-long nine-song set that started around midnight.  We never saw it, though.  After Elvis Costello’s performance, me, John, Chaz, and most of the crowd began filing out.  I have no recollection of how we got home.

Creem magazine did a story about the concert soon afterward. In their article there was a photo, and I spotted John, Chaz, and me in the crowd! There was a slightly elevated ridge on the grass field, and we stood there, to be a little bit above the crowd. I knew exactly where we stood, and I’m 100% sure that is us in the photo.

In 2005, Fred Schneider posed for some publicity photos at my veterinary hospital; he was to be the celebrity guest at an animal welfare charity event. I met him and showed him the pictures from the concert, and he mentioned that it was a fun show.

I then asked him to autograph my Heatwave poster and the album Wild Planet, and he obliged (with his huge, wacky signature).

I recently saw the poster for sale on eBay for $750.

I still find it interesting that most music fans haven’t heard of this concert, despite the kick-ass lineup.  Would it have been better known if The Clash had shown up, or if the festival had been filmed, a la Woodstock?  We’ll never know.

Although the concert wasn’t filmed, various recordings abound, including some tapes that were made professionally (despite the fact that no rights agreements were signed).  A studio whose recording truck was there to record Teenage Head’s set actually recorded the entire show.  The tapes were secured by the concert promoter.  The promoter gave the tapes to Jan Haust, a Canadian independent record executive, to ensure their professional restoration and safe keeping.  One hundred and two tracks, by the five major acts – B52s, Talking Heads, Rockpile, Elvis Costello, and The Pretenders – were acquired by Wolfgangs, a website that archives concert performances which you can download (not for free, though.) While browsing the internet, I’ve also come across the set by Teenage Head.

I was too young for Woodstock, but thankfully I was the right age at the right place at the right time and was able to catch this really memorable show.