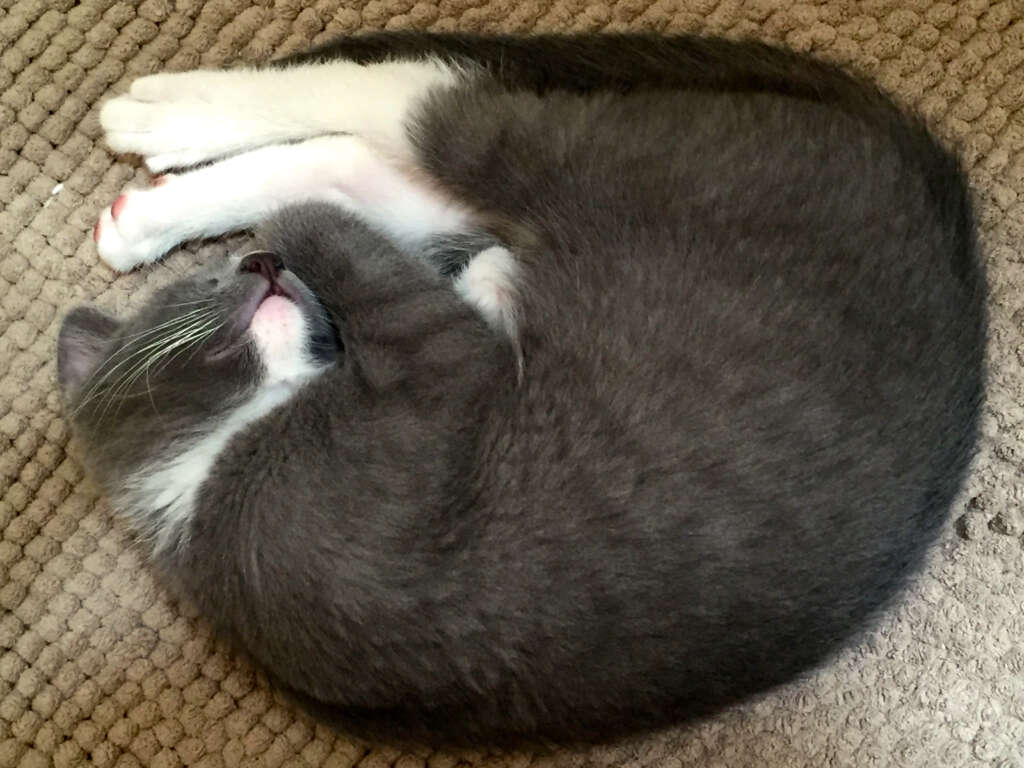 My friends have heard me complain many times about my spouse’s loud snoring. A snoring cat, however, has never bothered me. My beloved cat Crispy, who died in 2017, was a notorious snorer. When she slept on the bed, I found her rhythmic respiratory sounds soothing and reassuring. If the environmental sound generator on my nightstand had a “Crispy Snoring” setting, I would surely dial it in every night.

Snoring occurs when the tissues in the upper airways (the nose and the back of the throat) vibrate during breathing.  This is most likely to occur when cats are the most relaxed, i.e. when they’re sleeping.  Also, any obstruction to the flow of air through the upper airways can contribute to the onset of snoring.

So, is it normal for a cat to snore?  The short answer is…  sometimes.

There are harmless reasons for cats to snore, and some not-so-harmless reasons.  The most harmless reason would be a weird sleep position.  Cats are master contortionists.  Positions that look bizarre to us are often perfectly comfortable for our feline friends.  A sleeping position in which the head is oddly twisted can sometimes result in snoring if that position causes slight narrowing of the air passages.  This occurs with my current cat, Glitter.  If I call her name she’ll briefly awaken, and then fall right back asleep with her head in a new position. The snoring usually disappears.  Basically, this is the equivalent to nudging your snoring spouse, hoping their new sleep position is quieter.

Snoring is fairly common in brachycephalic cats – those with flat faces, like Himalayans, Burmese, and Persians.  These breeds have abnormal nasal anatomy.  Their short nasal passages and smaller-than-normal nostrils can cause obstruction to airflow, resulting in snoring. Another common feature in these breeds is a soft palate that extends further back than other breeds. This elongated soft palate can partially block the entrance to the trachea (windpipe), making it tougher for air to pass through, contributing to snoring.

Obesity can predispose cats to snoring.  Excess fat may deposit in the tissues that surround the upper airways, narrowing the flow of air and making the respiratory sounds more audible, especially during sleep.  Snoring is merely one of many reasons why cat owners should prevent their cats from becoming overweight.

Upper respiratory viral infections are common in cats, resulting in the same type of clinical symptoms that humans experience with colds: coughing, sneezing, runny eyes, and a stuffy nose.  Not surprisingly, a cat with a respiratory infection is more prone to snoring.  Cats with chronic sinusitis (persistent upper respiratory inflammation and infection) are life-long noisy breathers, and are notorious snorers.

In young cats, a common cause of snoring is nasopharyngeal polyps (NPs).  These are benign, pinkish-white growths that typically arise from the lining of the middle ear and extend into the nasopharynx (the back of the throat). The average age ranges from 14 months to 3 years, although I’ve seen many cases in kittens between 4 and 8 months.  While these masses are benign (not cancerous), they can grow to a size that causes obstruction of the nasopharynx.  Affected cats don’t just snore when they are sleeping; they snore all the time, their loud breathing noises often mimicking those heard in bulldogs and pugs. In addition to noisy breathing, cats with NPs often have nasal discharge, gagging, and trouble swallowing.  The most common approach to treatment of NPs involves removal of the polyp using gentle traction.  The cat is anesthetized or is heavily sedated.  Using a spay hook (a probe-like surgical instrument with a small curve at the end), the soft palate is retracted, revealing the polyp.  The polyp is then grasped with forceps and gently pulled out.  Polyps are growths with a small stalk, and it is imperative that the polyp is grasped by the stalk to ensure complete removal, otherwise it may regrow.  Removal of a nasopharyngeal polyp can be a very satisfying surgery for veterinarians, as the cat experiences immediate relief.  I clearly recall my most memorable polyp case: an uncomfortable five-month old kitten whose breathing could be heard across the room.  My staff and I marveled at the dimensions of the polyp – almost the size of my thumb! When the anesthesia wore off, we had a happy, playful new kitten and a shocked (and delighted) owner.

Sadly, snoring can occur for reasons that aren’t so benign.  Tumors affecting the nasal cavity, throat, or trachea can interfere with airflow.  Snoring, however, would likely be accompanied by other systemic signs, such as poor appetite, lethargy, weight loss, nasal discharge, and difficulty breathing and/or swallowing.  The prognosis for these tumors varies greatly depending on the type and extent of the tumor and whether it is amenable to surgery or chemotherapy.

While snoring can be a cute, quirky, harmless characteristic in many cats, it can sometimes be a sign of illness.  If your typically quiet cat suddenly starts snoring, or the snoring becomes louder, or if your cat develops other symptoms along with the snoring like sneezing, poor appetite, weight loss, or difficulty breathing, prompt examination by a veterinarian is warranted.