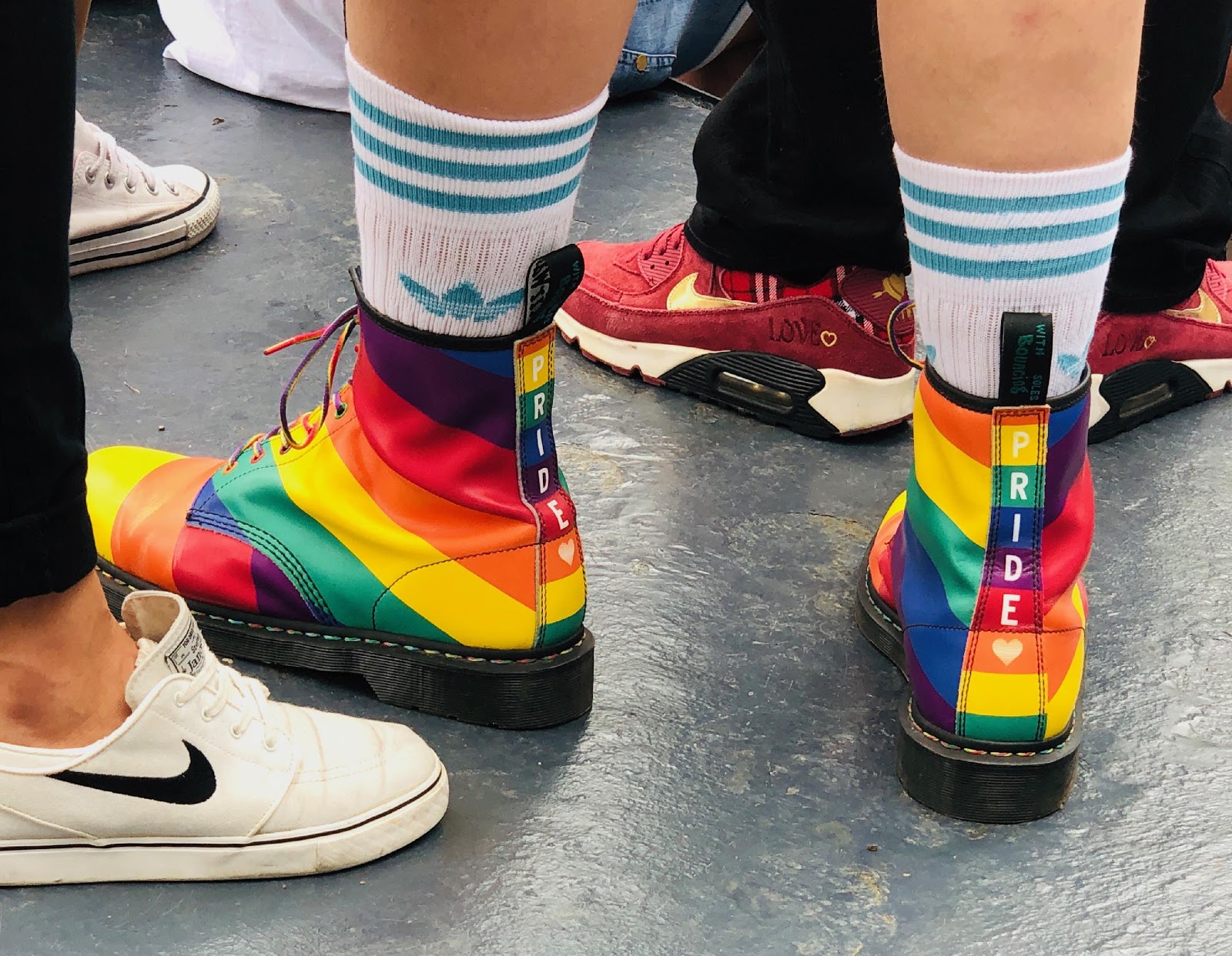 In New York City, the big Pride parade occurs on the Sunday of Pride Weekend, traditionally the last Sunday in June.  In Amsterdam, however, the parade occurs on Saturday. Rather than march down the street, the floats sail down the Prinsengracht canal.  In New York, traffic is a nightmare and trying to get from one side of town to the other is an ordeal. Because it all occurs on the canal, there’s no effect on traffic.  It’s great. And just like in New York, if you want to see all the fun and excitement up close, you need to get to the parade route early and scope out a nice spot.

Despite arriving at what I thought was a pretty reasonable time (11:30; parade starts at 2:00), many of the good viewing spots were taken.  The real primo viewing spots are aboard boats that are docked on the canal. Cool parties often take place on these boats, with lots of food and drinks.  Because the boats are down on the water, and we’re up on the edge of the canal, our view of the parade isn’t obstructed.

We found a nice spot, right by one of these party boats.

Before long, the boat was pretty full.

Rainbows, as usual, were the most common theme.

I particularly liked this one guy’s shoes.

It’s a New York tradition that the parade is led off by the Dykes on Bikes, a lesbian motorcycle group.  They come motoring down the avenue, revving up their engines. In Amsterdam, before the floats start sailing along the canal, the opening act is a performance by some guys (and gals) with funky water-jet boots on their feet, as they ascend and descend their way along the canal, sometimes spraying the crowd with water (last year, it was champagne!) and getting us all psyched up for the parade.


Many of the floats in the parade carried inspiring messages.  The 50th anniversary of Stonewall, which was the birth of the gay liberation movement, was an obvious theme at the parade.

There were lots of inspirational messages all around.

There was something for everyone at the parade, basically.  I can’t think of a group that wasn’t represented.

To say that the parade was “colorful” would be an understatement.

After an hour or so of watching the parade, we connected with Udi.

Away from the edge of the canal, the streets were heavily crowded.  Everyone was laughing and flirting and having fun. After about 20 floats, things in the parade start to look and feel the same, so it’s fun hitting the streets, as long as you don’t mind getting jostled a bit.

Udi has a friend in Amsterdam named Michiel.  I’ve met him a few times. He owns a small motorboat, which I’ve been on twice.  I was sort of hoping that he’d take the boat out during Pride, because it’s really a lot of fun to cruise around the canals, and I thought it would be a memorable event for Robb.  Sure enough, Udi said that we were going for a boat ride! We extracted ourselves from the crowd, hit the supermarket so we could buy drinks and snacks for the boat, and headed to the area where Michiel had docked the boat, about a mile away.  There were already four friends of Michiel on the boat, and with the three of us we had eight total, which was perfect for a boat of this size.

We snacked and drank our way through the canals.  Robb enjoyed it very much.

It’s really fun to go under bridges and through narrow little tunnels.  Michiel has lived here for years and knows the canals very well, so we went through the most picturesque ones.  We came upon a very charming little canal on the east side, with colorful little homes on both sides.

We sailed for two hours.  There were many other boats on the water, and everyone was in a good mood, waving at each other and celebrating Pride.  At 7:00 pm, our sailing adventure came to an end, and we disembarked and headed back to the apartment to rest up for a while.

There were parties all over the city that night. Robb and I had tickets to a big dance event in Westerpark.  There would be food, drinks, and multiple dance floors, some indoors, some outdoors, all with loud, thumping music.

To buy drinks, you had to pay with special tokens, so we purchased a few and had a couple of beers.  We did a little drinking and tried to do a little dancing.

Robb was getting many messages from home on his Apple watch and his iPhone, and he was a bit distracted, so after a short while we bagged the dancing and went to a chillout area: a room with big pillows and cushions on the floor.  We snagged a cushion and spent some time relaxing and people watching. We had two tokens left. In the corner of the chillout room was a bar. In addition to drinks, they were selling balloons with laughing gas!

They cost one token each.  Back in my high school and college days, my friends and I used to do “whippets” now and then.  It had been decades since I’d done one, but hey, we each had one last token, and we were celebrating, so we went ahead and each got ourselves a balloon.  Robb wasn’t impressed with the feeling it gave him, but it brought back fun memories for me. After the whippet adventure, we went ahead and made the long trek back to the apartment and called it a night.