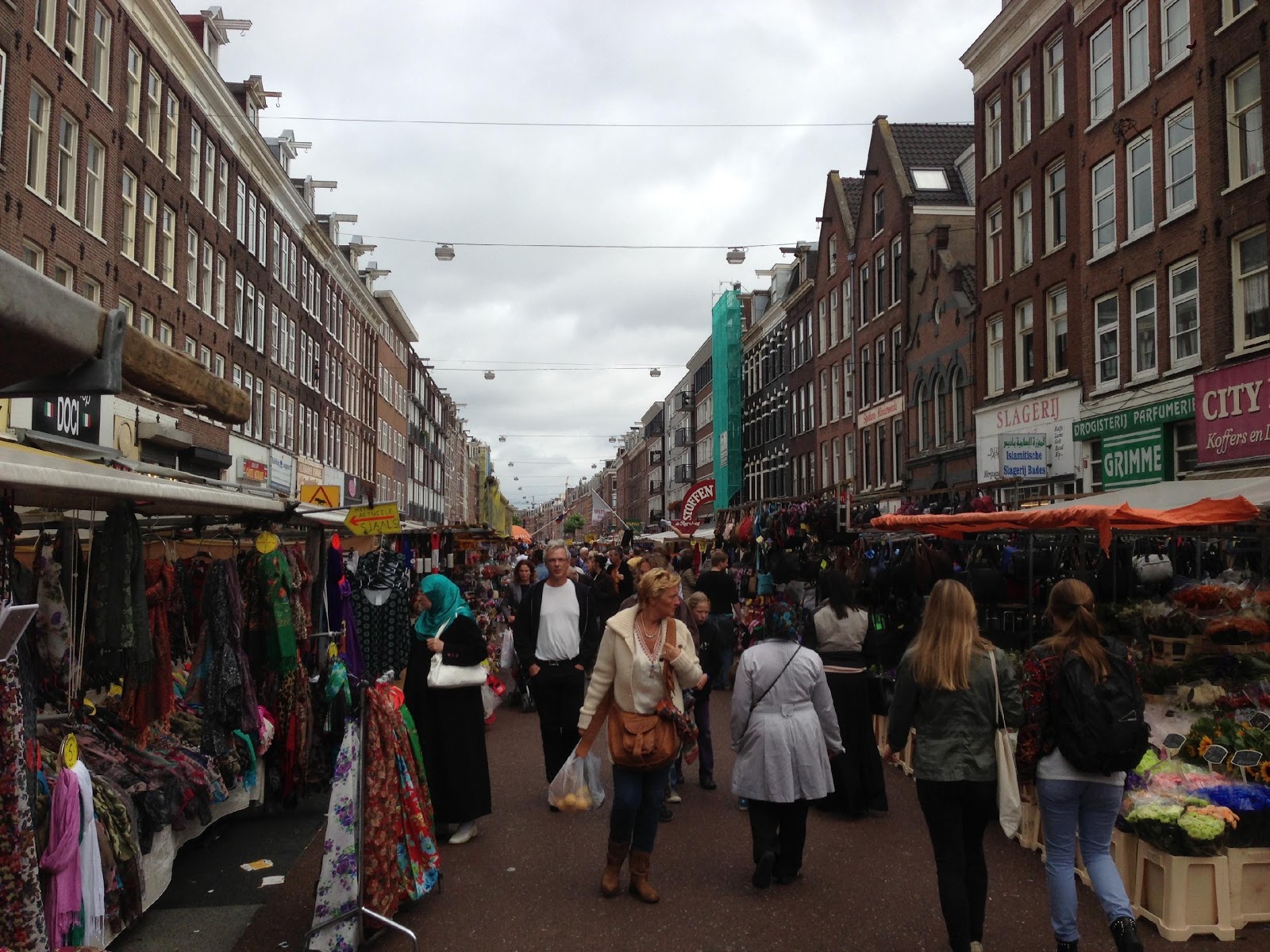 On Wednesday, we decided to check out one of my favorite neighborhoods in Amsterdam:  The Pijp. There are charming, quaint streets, lots of adorable cafes, and the famous Albert Cuyp market, where vendors sell clothes, food, and all sorts of other items down a stretch of several blocks.

The plan was to go peruse the market and then have lunch at Bazar, a favorite restaurant of mine, located at about the midpoint of the market.  We shopped at the market, but were disappointed to discover that Bazar didn’t open until 4:00 p.m. We wandered further and came upon a nice café with outdoor seating.  Happily, a calico cat was chilling out on a nearby bench, and I got my kitty fix for the day.

I told Robb not to have dessert, because a friend of mine, Noam, owns a famous cake shop and café in the Pijp, called De Taart van M’n Tante.  This literally translates as My Aunt’s Cake. Whenever I’m in town, I like to stop by and say hi, and invariably he offers me a piece of cake. We stopped by the shop.  Half the time, he’s not around, but today he was. I introduced him to Robb, we had a nice chat, and then indulged in some really delicious cake.

We returned to the apartment to chill out for a bit, and then hit the street again.  We had no real plans for the evening other than to just stroll around a different part of the centrum.  We headed east, toward the Red Light District. Around the Oude Kerk (Old Church), we found the statue of Belle.  The statue honors sexworkers all over the world. We had to take a photo, as Robb’s sister’s name is Belle!

As we continued toward the Red Light District, we passed through Newmarket, and to my delight, I discovered that the square was one of the staging areas for the many Gay Pride street parties that were occurring throughout the city.

There were beer stalls and a big stage with entertainment, and it turned into a great evening.  Neither of us are big beer drinkers, but we definitely indulged.

There was a lot of singing and dancing.  Many of the songs were Dutch, and the crowd knew the words and they were singing heartily.  It was fun to watch. There were also some pretty crazy stage acts. This one act, with guys dressed up as animals was pretty wild.

And it only got a little crazier as it went on.


After the final act, we headed up Zeedijk, the main street that comprises Amsterdam’s small Chinatown, and had a great meal at a nice Chinese restaurant before heading home.