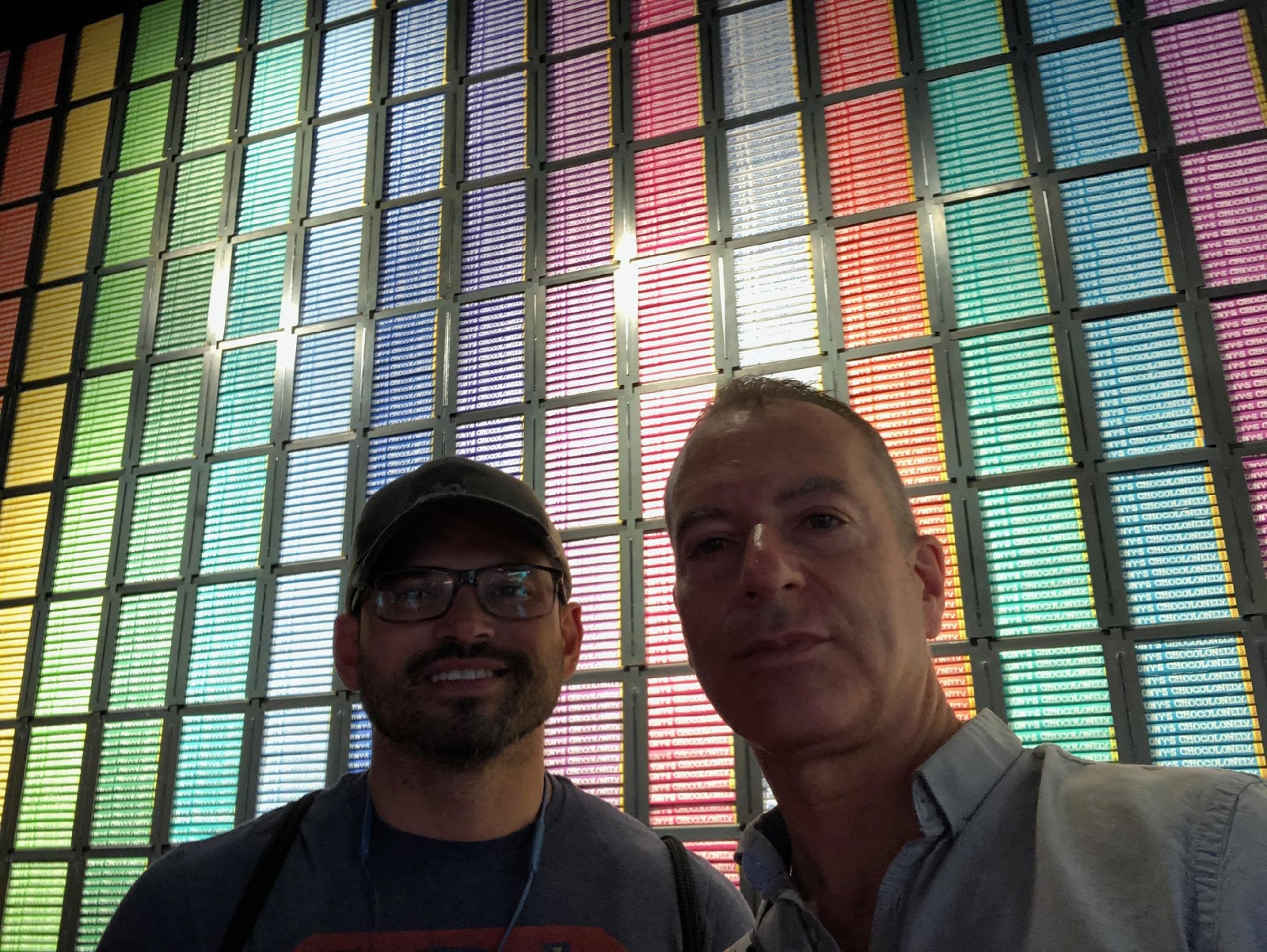 Robb Comes To Amsterdam Pt.6 – The Trip Comes to a Close

The last days of the trip had really beautiful weather, and I convinced Robb to do some biking.  (He was obsessively keeping track of how many steps he walked daily, and he was reluctant to go biking because the pedaling didn’t register as steps. Silly, I know.) Vondelpark is a beautiful, popular park in Amsterdam, and a picnic in the park is a great way to spend the day.  I have a bike, and I have the keys to Brad’s bike, which is always locked up on the bike rack in front of the apartment, so there was no need to rent bikes. Brad’s tires needed a little air, so we pumped ‘em up and headed out.

We found a nice spot on the grass, laid out the towel, and had lunch.

I could hear what sounded like live music in the background.  I knew that Vondelpark’s open air theater was nearby, so we biked toward the music and found the theater.  There was a deejay playing some electronic music and a live band, but it came to an end just as we arrived, unfortunately.

Not far from Vondelpark is a big food court called Foodhallen.  I’d been there several times with Udi. There are about 20 food stalls and bars, and it’s usually a lively scene.  I suggested we go there for dessert.

I was surprised that it wasn’t busy at all.  I guess in the past, I’d been there in the evening, when the after-work crowd descends on the place for food and cocktails.  The middle of the day is much quieter.

I perused the cute little pastries on offer, but we elected to go with frozen yogurt instead.

Although Vondelpark is probably the most popular park in the city, I’ve always preferred Westerpark, which is a little quieter.  Also, the park is home to the Tony’s Chocolonely flagship store, where you can get free samples of chocolate.

We stopped by the shop, got a nice picture in front of the wall of chocolate bars, and then chowed down on some samples.

In the park was a small market, where vendors were selling arts and crafts, and food.

I told Robb that the trip was coming to a close and that this might be our last market for buying gifts to bring back home, but there was nothing that interested him.

We biked back to the apartment and rested for a bit.  A few hours later, we hit the streets on foot. I wanted to visit the Jordaan neighborhood.  The streets are quaint and quiet, and the small canals that run through the neighborhood are really lovely.

On the stroll, we passed by this very colorful bike.

Before continuing our stroll, Robb passed by a coffeesh…  um… a bakery… and got himself a brownie.

We leisurely walked the neighborhood, admiring the houses and canals.  Although I’ve seen and photographed so many canals in the centrum, it never gets old to me.  A view like this reignites my longing to sell everything we have in America and come here and spend the rest of my retirement here.

We passed by one of my favorite stores, Cats and Things, but they were closed.  I like their sign. “Everything for, about, and with cats.”

For dinner, we went to the Leidseplein, where there’s an excellent ramen shop, and we each got a bowl of ramen.

The next day had beautiful weather again.  We went to the gym for the last time.

Every Saturday and Monday, not far from Udi’s apartment, is the Noordemarket.  The Saturday market is mostly food. The Monday market is some food, and a lot of other arts, crafts, and housewares.  I’ve bought all sorts of things here. Robb was checking out the sunglasses.

For lunch, I wanted to go to Spanjer and van Twist.  It’s a café with indoor and outdoor seating. The outside seats are on two levels, though.  One level is on the street. The lower level goes down on a ledge that directly overlooks a little canal.  These are popular seats, as they are great for watching the small canal boats go by. It can be hard to snag one of these tables, but we got lucky.

I love bitterballen, and this place makes them pretty well, so we got some.  Bitterballen are hard to describe. They’re like deep-fried crunchy meatballs, except the interior is filled with some kind of soft gushy meaty stuff.  You dip them in mustard before eating them. Anyway, they were lekker (tasty).

We got the check, and as we were making our way to the main restaurant to pay, I hear, “hey, American boy!”  I look over, and there’s the lovely and talented Naomi van Gelder. I no longer refer to her just as “Udi’s friend” because I’ve been to her home for dinner, seen her art exhibitions, and gone to museums and lunches with her and Udi enough times to consider her a true friend now.  It was so nice running into her.

I told her I was in town for a few weeks, and we agreed that it would be nice to get together while I was here.  (About a week later, she and I, plus Udi and another friend, did indeed get together, at the EYE Museum for an excellent exhibit, and dinner.)

On clear, sunny days, somehow I always end up at Vondelpark.  We took a nice stroll through the park again, and saw this nicely decorated bicycle.

Right across from Vondelpark is Max Euweplein.  Max Euwe was a famous chess player, and there’s a giant chess set in the square that is in constant use.

We continued walking, and came upon one of my favorite streets, Reguliersgracht.  This is a canal street, and is best known for being the spot where seven bridges line up perfectly, making for a nice photo.

Every day, while walking home, we would pass by the ultra-popular pancake house, The Happy Pig.

So, the following morning, before Robb had to head to Central Station to catch his train to the airport, we had our last meal together at The Happy Pig.

I took Robb to Central Station and we said our goodbyes.  Robb and I get along very well, and this was a fun trip. Of the three trips we’ve taken together (Puerto Rico, Mexico and Amsterdam), this was definitely the most fun.  No plans yet for a fourth trip, but I’m sure it’ll happen some time in the future.

Now I get to rest up for two weeks, and then, my college buddies come to visit!  We’re celebrating 41 years of friendship. Stay tuned for stories and photos.