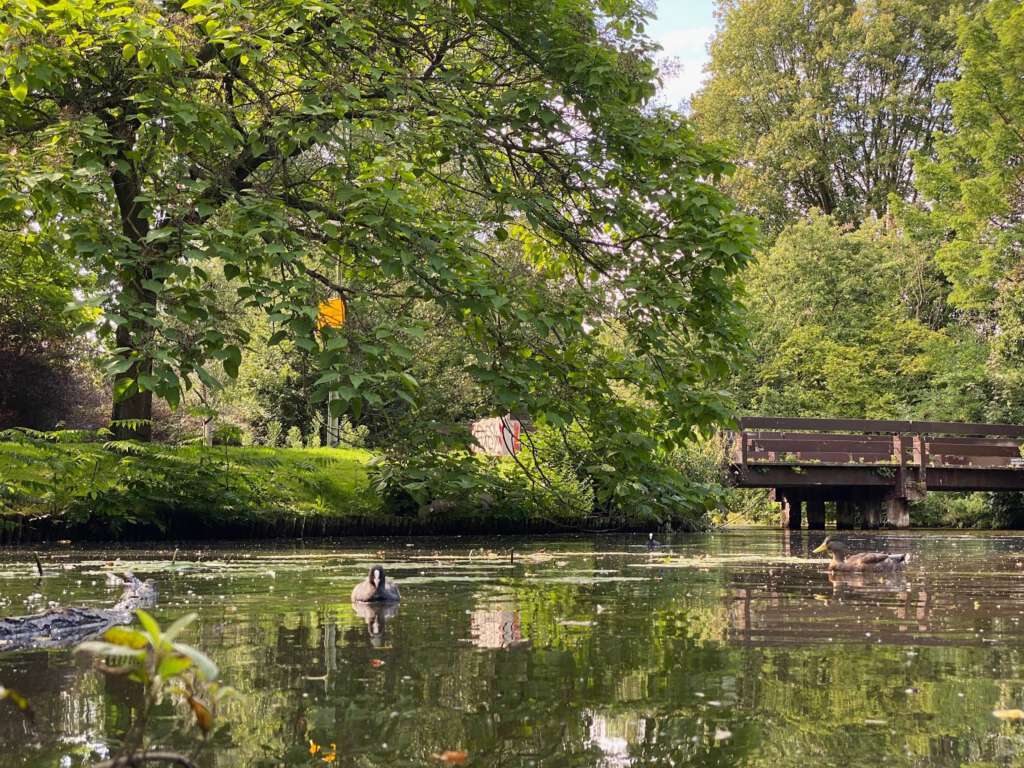 Beatrixpark is one of the oldest parks in Amsterdam, dating from the 1930s.  It’s in the southern part of Amsterdam, south of The Pijp neighborhood.  The park has lots of landscaped paths, a pool,  a playground, and a really lovely pond.  Although I’ve been to Amsterdam many times, I somehow managed to miss getting to this park.  I finally visited when I spent the entire month of August 2021 in Amsterdam.

The pond was really beautiful.

Very serene, with a couple of ducks.

The park is very nice, but it really seems geared more toward families. I did manage to take some pretty interesting photos there, though.  There was one section of the park that had a weird structure for kids to climb on and play in.

It was painted white, except, on the other side, the surface was metallic.

That allowed me to get a pretty cool selfie.

All of the holes and crevices made for good photo opportunities.

I was hanging out by the metallic side, and I managed to get one of the coolest photos of my trip.  One of the little girls who was playing emerged from one of the port holes, and I was there just at the right time. A little fancy editing, and it really looks otherworldly, like the girl is breaking through a hole in the time-space continuum.

At the edge of the park, you could see some buildings off in the distance, with some benches in the foreground.

I thought it was picturesque.

And with the sun shining really bright, the contrast made for a very nice black and white composition.

One of my friends thought it looked too bleak, but I think that’s what I like about it.  Anyway, Beatrix Park was great for photos, but overall, not a park I’m likely to visit many more times.  It seems more geared for families, with the pool and that weird climbing structure.  Definitely check it out if you’ve never been there before.