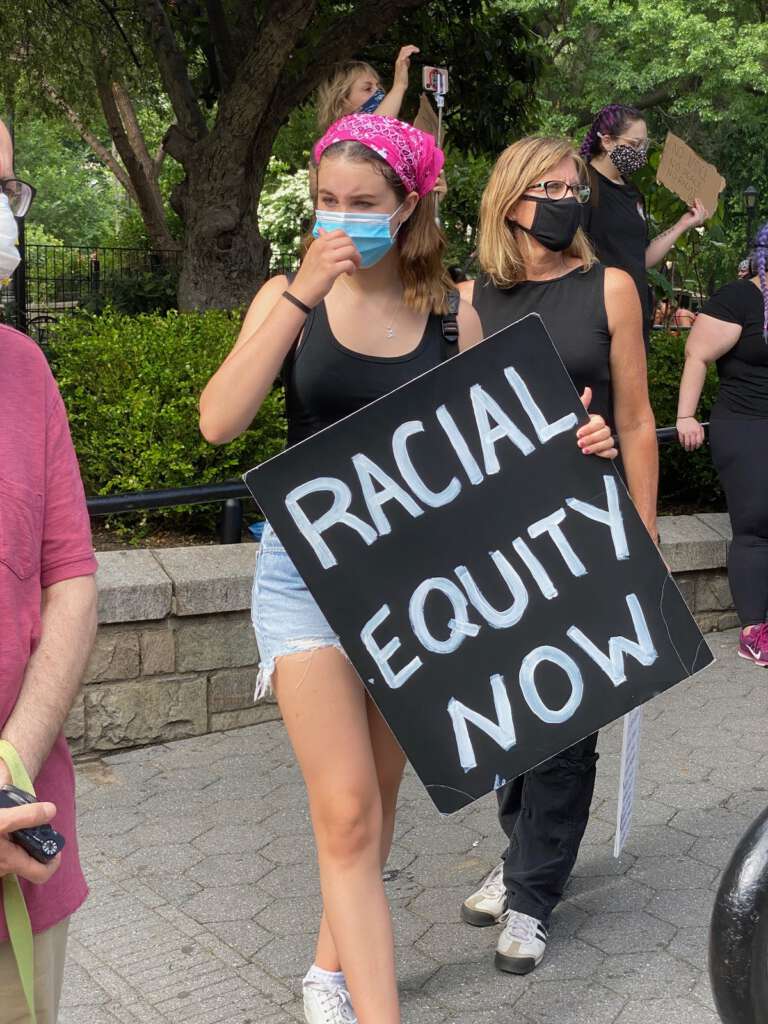 On Riots and Racism

I’ve been slow, and also a little reluctant, to put together a blog post about the events of the last few days.  I live in New York City, and the rioting in the streets has, at times, come almost literally to my doorstep.

A few days ago, I posted my thoughts on my Facebook page.  I had awakened at 3:00 a.m. for the third consecutive night, the state of the world weighing heavily on my mind.  Like everyone, I’d been dealing with the pandemic as best I could, trying to wrap my head around the deaths of over 100,000 Americans.  Compounding my agitation has been my sheer revulsion at every word, every action, every lie perpetrated on the populace by a president too stupid, vile, and despicable for words.

It was the video of George Floyd’s murder that pushed me over the edge, eight minutes and 46 seconds of shocking brutality committed by those supposedly sworn to protect and serve their communities.

As I walked the city streets, the aftermath of the previous days and nights of protest are seen everywhere.  The burned hull of a police car.

Although I haven’t taken part in any of the marches, I do support the protests.  I’m a rebellious person by nature; I grew up in the 60’s and came of age in the late 70’s.  (My favorite genres of music are the hippie music of the Woodstock era, and punk rock, so that should tell you a lot.)  I understand the anger behind the rioting, and the importance of it.  In the early hours of June 28th, 1969, after years of systematic police brutality and abuse, gay patrons of The Stonewall Inn spontaneously decided to fight back, refusing to accept that their oppression was simply “the way it is”.  It took four nights of violent rioting to get their point across, and the uprising led to community action that gave birth to the gay rights movement.  Last night was the tenth night of rioting.

I had the great privilege earlier this year to spend a little over two weeks in Ghana.  I was with a volunteer group called Mission Rabies, working with local veterinarians and health workers to vaccinate as many dogs as possible against rabies.

My mornings and evenings were spent in the company of my fellow international volunteers, all of whom were white.  During the daytime, however, I never encountered another white person.  The populace of Ghana is entirely black. My vaccination team were all black, and the families that owned the dogs that we vaccinated were all black.

In many instances, most notably amongst the children, I was the first white person that they had ever seen or met.

I was regarded with curiosity and fascination, but most notably I was treated with incredible warmth and hospitality.

Never for a moment did I feel any bias, judgment, or bigotry.  I stuck out everywhere I went, but it never was awkward.

Ghanaians experience no racism from each other. They do not walk around constantly aware of their race, reminded of their race, judged by their race, because everyone is the same.  While I know this can’t be expected in a multi-racial, multi-ethnic country like the U.S, I can be forgiven for dreaming, for trying to imagine what it would be like for everyone to feel as welcome and comfortable in their own skin, as I felt during my time in Ghana.  Perhaps these protests will finally bring about the change that is so desperately needed.  I have no illusions, but I’ll do whatever I can to bring it about.

I spend the day walking around, surveying different parts of the city in the aftermath of the demonstrations.  I passed several of those LinkNYC telephone charging stations.

Normally, they flash public service announcements about coronavirus safety, but today, all of them were showing a simple, coordinated message, on a continuous loop: the names of black victims of excessive police force.

I ended up at my favorite park, Tompkins Square Park, where it was peaceful and quiet and I was able to read my book and take some photos.

I walked back, heading through the epicenter of the protests, Union Square.

I was initially met by a large police presence, but there was no tension at all.

Here, I came upon a large group of peaceful demonstrators, young people with a variety of signs and posters, chanting earnestly.

Stores had donated pizzas (I had a slice); Ben & Jerry’s had donated ice-cream sandwiches (I had one of them, too), and bottled water was available free everywhere, handed out by very kind, considerate people.  It was a quiet, powerful show of unity.

I admit to being dismayed by some of the vandalism.  The graffiti doesn’t bother me.  The shattering of store windows and looting, yes.  I understand that this is all part of the rioting, but I feel that it diverts attention from the main message of the marchers, and that’s frustrating.  This pandemic has also wreaked havoc on small businesses.  Employers have had to fire or furlough their workers, home school their kids, and try to figure out where their next meal is coming from, while they await for the social distancing restrictions to be eased so they can hopefully restart their businesses.  For some of these businesses, having their windows smashed and their inventory stolen is going to be the final nail in their coffin.

Today, I walked past a Korean BBQ place two blocks from my apartment.  There was a sign on their window that said that they were already out of business and pleading for their windows to be spared.

The window was smashed anyway.

I do see the big picture, and I understand there will be casualties from the rioting, but I still find it a little distressing.

More demonstrations are scheduled for today, and for the weekend.  I hope they have a lasting effect on society and that we finally see some real change.