The Yu Yuan Bazaar is the city’s largest Flea Market 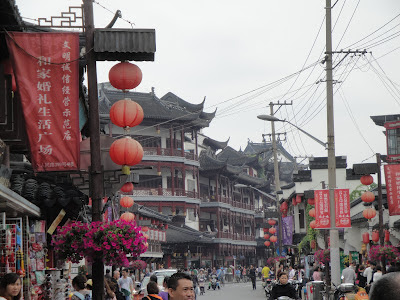 Its narrow lanes are dotted with over 100 shops 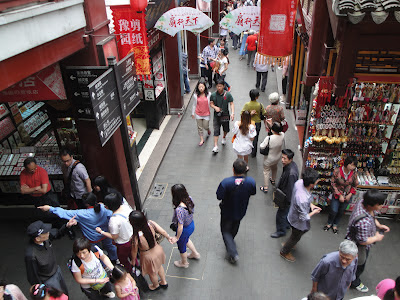 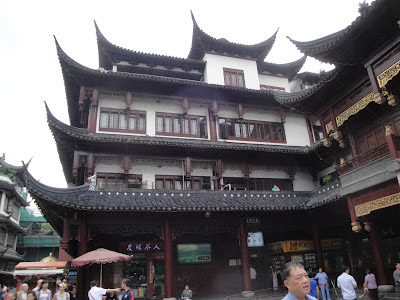 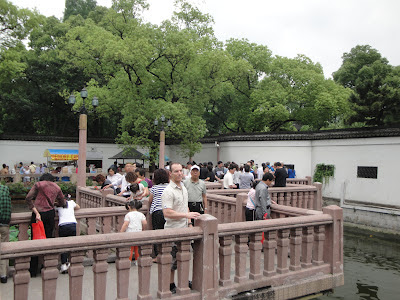 as well as China’s oldest teahouse.  The Yu Yuan bazaar and garden is the most popular tourist attraction in Shanghai and is always very crowded. 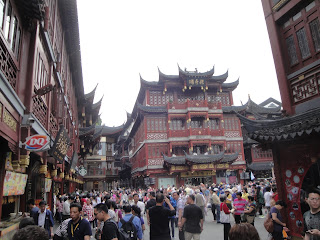 The Yuyuan Garden, adjacent to the bazaar, is exceptionally beautiful. The garden was finished in 1577 by a government officer of the Ming Dynasty (1368-1644) named Pan Yunduan. Yu in Chinese means pleasing and satisfying, and this garden was specially built for Pan’s parents as a place for them to enjoy a tranquil and happy time in their old age.

In the 400 years of its existence, Yuyuan Garden had undergone many changes.. During the late Ming Dynasty, it became very dilapidated with the decline of Pan’s family. In 1760, some rich merchants bought Yuyuan Garden and spent more than 20 years reconstructing the buildings. During the Opium War of the 19th century, Yuyuan Garden was severely damaged. The Yuyuan Garden you see today is the result of a five year restoration project which began in 1956. The garden was open to the public in September, 1961. You can see how lovely the gardens are 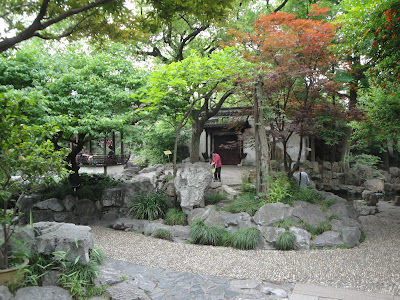 There are lots of bridges, pavilions, and ponds.  Mark tossed a few pieces of bread into the koi pond, and started a koi stampede! 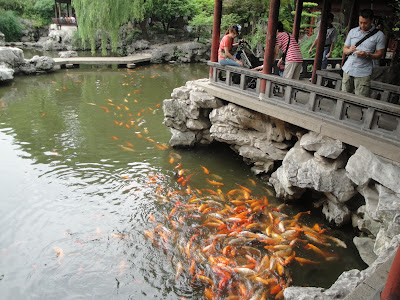 So far, it hadn’t been a very feline filled day. I did see this cat sleeping in the doorway of a shop nearby the bazaar, 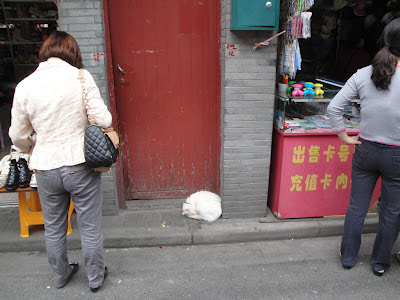 and I managed to get a nice close-up of her sleeping. 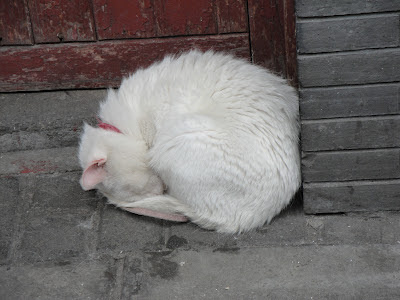 However, as we left the bazaar and gardens, and headed back to our hotel, I hit paydirt!  I came across the cutest cat of the whole trip, an adorable calico kitten outside a shop, resting on a cardboard box 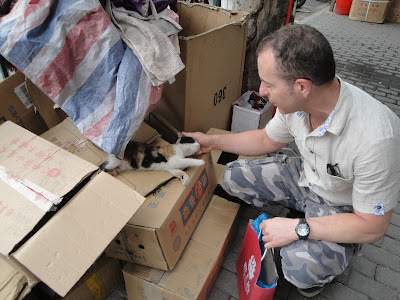 Look how cute she is!  She let me pick her up 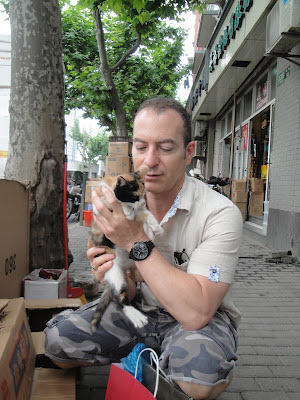 and snuggle with her a little 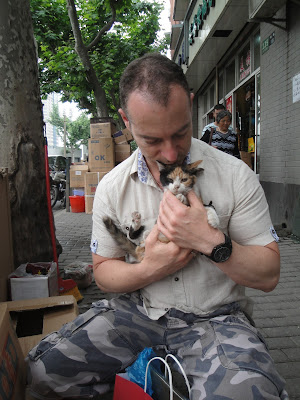 I put her back down, and gave her one more pat to say goodbye, but she got frisky and wanted to play 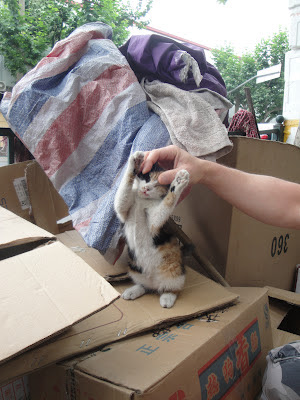 She was the most adorable thing.  I wish I could have taken her back with me.

After freshening up at the hotel, we strolled the Bund walkway, going south this time, to another “lifestyle hub”, as they call them in Shanghai.  This one is called Cool Docks.  It’s similar to Xintiandi, but not as fully developed yet.  It’s basically a contemporary shopping/dining complex with a central plaza and fountain. 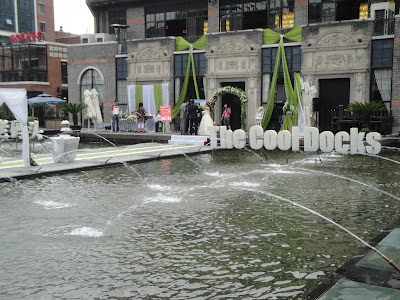 Its first wave of venues included a Starbucks, a Greek terrace restaurant called Mythos, several independent cafés, a gay club and a tattoo parlour. While some (including the aforementioned Stillers and Kebabs on the Grille) continue to do well, others have closed down or relocated, so it’s still in a state of flux.  But it was a fun place to visit, as you can see. 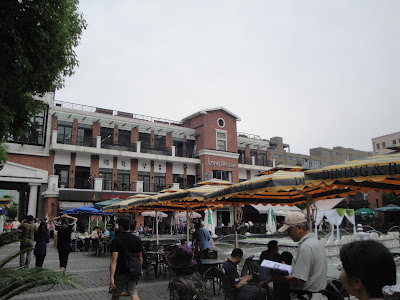 We moseyed back north on the Bund walkway, 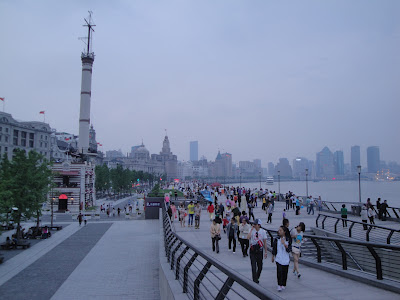 and enjoyed the skyscrapers across the Huangpu at dusk. 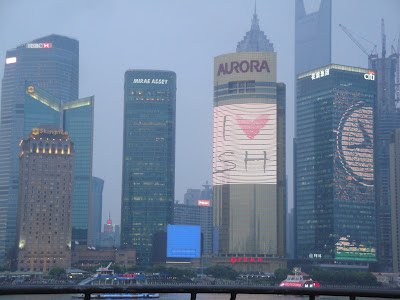 We spotted the Bund Bull, 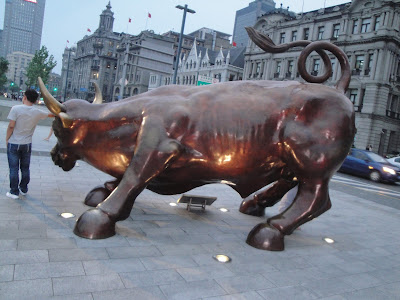 and of course, I had to pose for a crude photo. 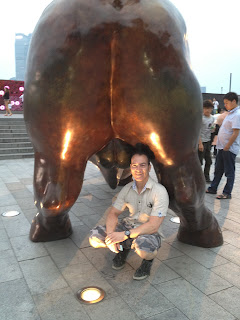 We then went to Lost Heaven for dinner.  It’s the same restaurant we went to on our first night in Shanghai.  I know it seems crazy to go to the same restaurant  twice when you’re visiting a foreign city, but the food and the atmosphere was so wonderful, and there were  so many  other things on the menu we wanted to try, we figured what the heck.  And once again, it was great.
We went back to the hotel for a little disco nap, but we slept a little longer than we had anticipated, and woke up at midnight.  Since it was our next-to-last evening in Shanghai, we still wanted to go out with a bang, so we got dressed quickly and headed to MJ Club, for their “Heaven” dance party. 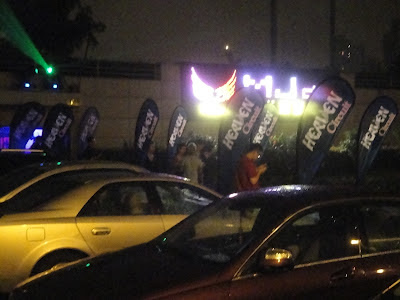 The place was hopping. 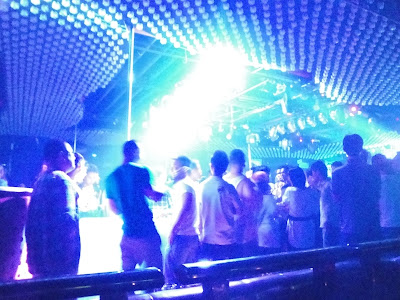 We danced and drank until about 2:30 before calling it a night.
Tomorrow is our last full day.  Hopefully I’ll see a few more cats before I leave.
CHECK BACK SOON, Dr. Plotnick’s China Travelog continues.