My Travels in China: Shanghai Day 2

After another weird breakfast (malar cakes, sesame balls, tiramisu), we headed over to Xintiandi.  This is a renovated two-block complex of converted stone arch gate terraces, with a central boulevard running through it. It’s loaded with lovely shops and restaurants. 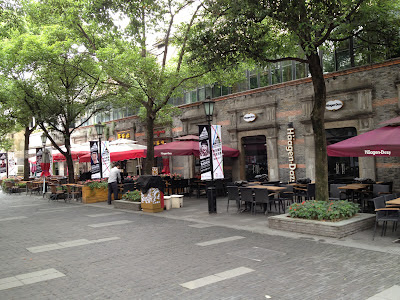 It’s kind of quiet during the daytime, but gets hopping at night. 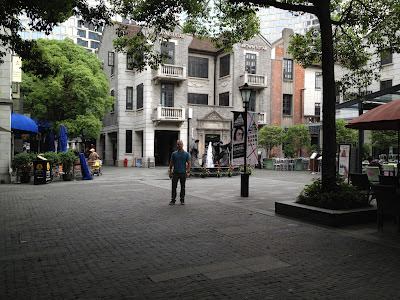 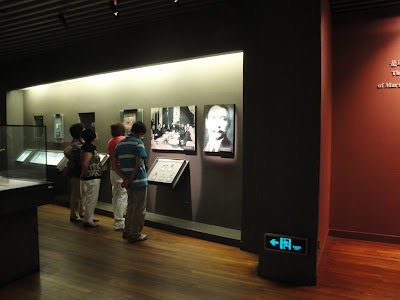 On July 23, 1921, a group of Marxists, socialists, and communists came together to lay the foundations of the communist party. Among the delegates at the meeting was Mao Zedong, a young revolutionary who would eventually become the first chairman of the new People’s Republic. A display with life-size models of the 13 delegates is probably the most popular display in the museum, and even though photos were prohibited, I snuck one when the guard turned away. 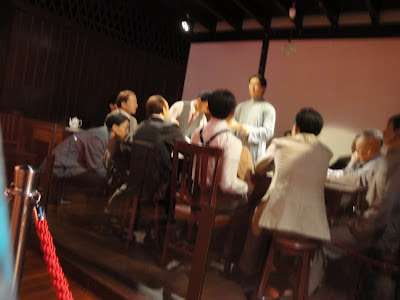 Of course, I grabbed a couple of gratuitous commie photo shots 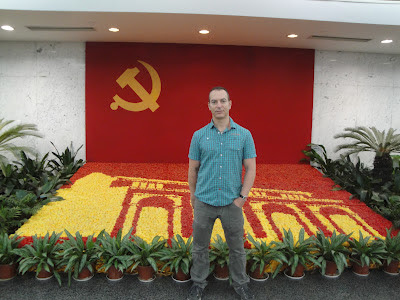 and bought this hilarious watch at the gift shop.

Our next stop was Tianzifang, a little warren of alleys tucked away between two main streets. These little alleys contain numerous stores, art galleries, cafes and restaurants. 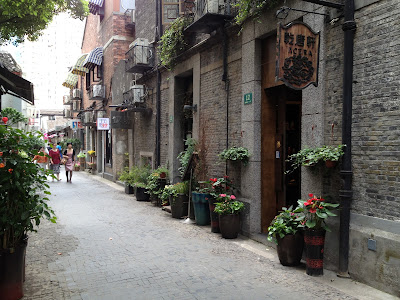 It was really like a maze, and at every turn you took, you discovered a new alley and an interesting collection  of shops. 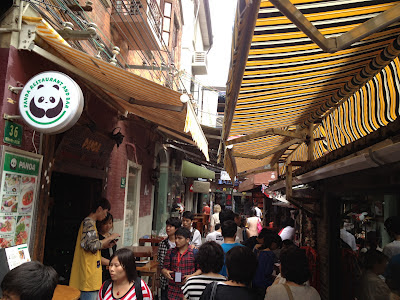 I love these kinds of neighborhoods, and I had a great time.  I also got to see a few cats!  Like this boutique cat. 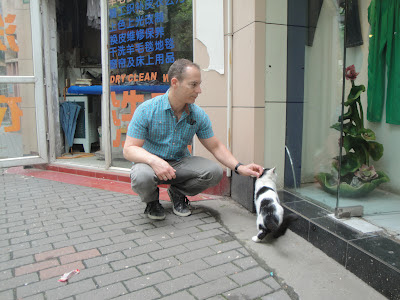 In the same store was, I have to admit, a pretty cute little dog, too. 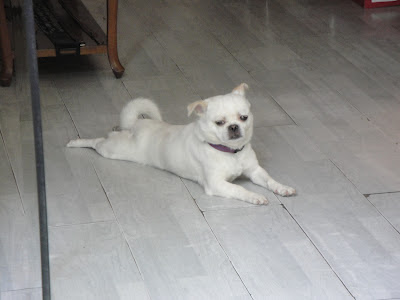 I saw this kitty outside a crafts shop. 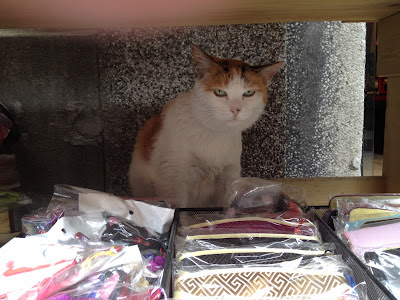 She reluctantly let me pat her. 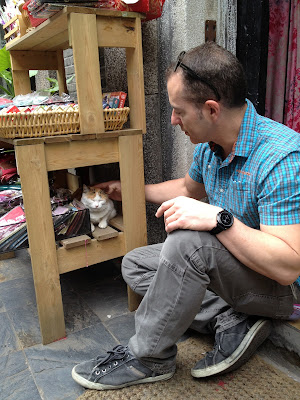 In one restaurant, I spotted a table occupied by two kitties.  The waitress saw me photographing the cats and tried to get me to come in and eat.  We had just eaten, so I declined, but I told her that  I thought it was cool that she had two American Curls in her shop. 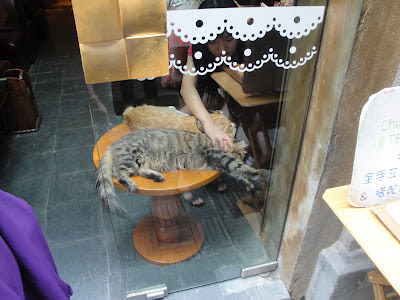 She was amazed that I had heard of the breed (until I told her I was a cat vet from America).

My guidebook had a listing that intrigued me. It was a housing complex called Cité Bourgogne. 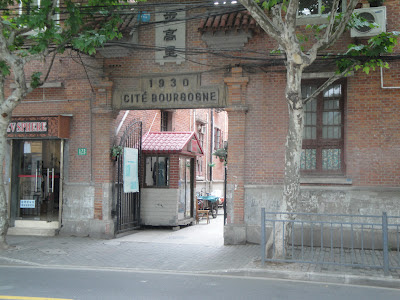 It is supposed to be a unique example of the shikumen (“stone gate”) style lane house dwellings constructed across the city during its early-twentieth-century heyday. The buildings are all 3 story high red brick buildings, with laundry drying on the clothes lines and bikes parked out front of nearly every apartment. 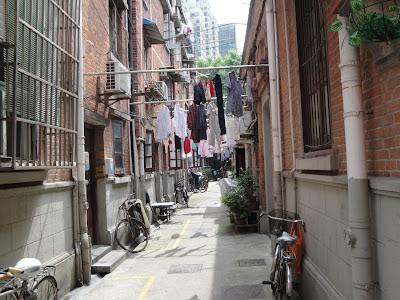 It was built in 1930. Strolling  through the narrow lanes of this block-sized complex gives you a sense of yesterday’s Shanghai.
Designed to accommodate 78 families, and currently occupied by some 450 households, Cité Bourgogne provides a glimpse of a way of life that is fast disappearing as old housing stock falls before the wrecking ball to make way for high-rise developments and glitzy malls. As I strolled the nice lanes of the complex, I didn’t see any cats, but I came across this very cute pup. 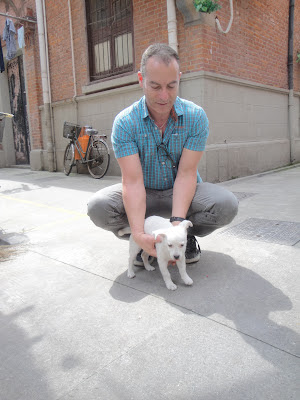 The next site on our itinerary was the Shanghai Jewish Refugee Museum, in the Pudong district. 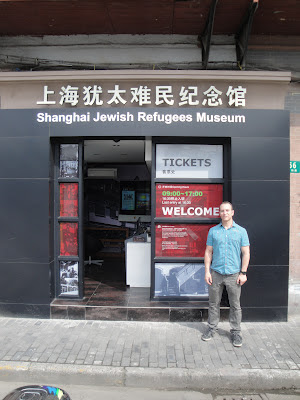 This museum was built in memory of the time during the Second World War when Jewish refugees sought sanctuary from persecution. It is housed in the former Ohel Moshe Synagogue 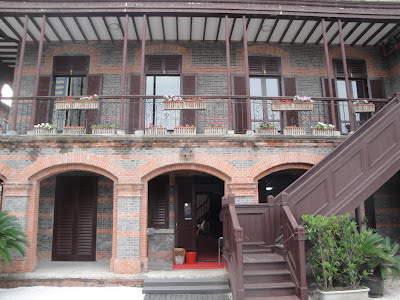 where the Jewish refugees gathered for religious activities. The museum holds many scrolls and other cultural relics. 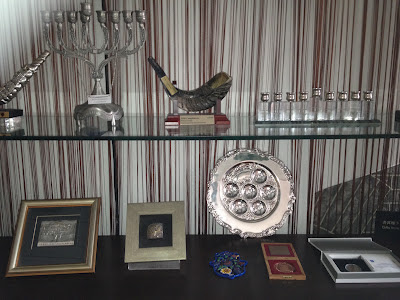 The history of  Jewish Shanghai is interesting. Between the year 1937 and 1941, Shanghai has received 25,000 Jewish refugees and became the only metropolis in the world which did not refuse Jews. The number of Jewish refugees that Shanghai took in was equal to the total taken in by Australia, New Zealand, Canada, India and South Africa. “Ohel Moshe Synagogue” became a synonym for “rescue” and “refuge”. 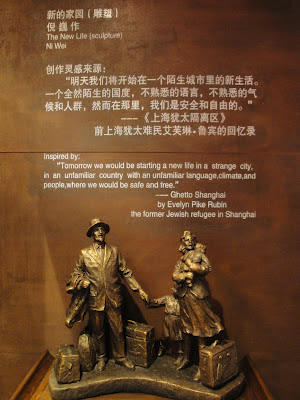 The Jewish refugees lived a free and peaceful life around the former Ohel Moshe Synagogue. Between the end of the Second World War II and 1960’s, many left China and emigrated to all parts of the world one after another. But the life in Shanghai was so memorable, and they considered Shanghai as their second hometown and called themselves “Shanghai Jews”.

After learning a lot at the museum, we went to a very cool building nearby.  Architecture fans would  be pretty impressed with the place.  It’s called “1933”.  It’s a former slaughterhouse that’s been transformed into a large space for art, music and restaurants. 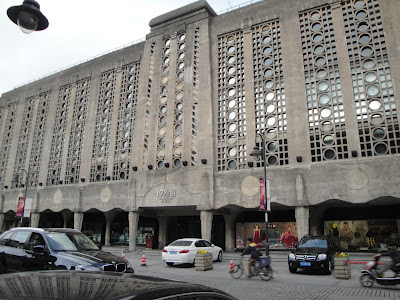 All of the stores and restaurants in the building revolve around a central core that can be accessed by a series of bridges that cross back and forth at various places. 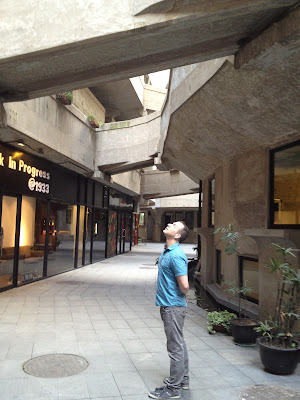 The space between the edge and the core is open air and the entire building reeks of Communist era concrete mixed with Art Deco styling. 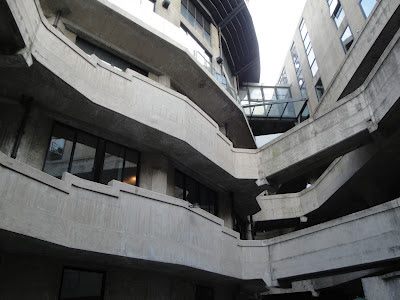 That mixed in with the still existent “Cattle Road” ramp and the tight shadowy corners gives the building a creepy feeling that is juxtaposed by bright airy spaces. Walking  through it, you feel like you’re in an M.C. Escher drawing come to life. 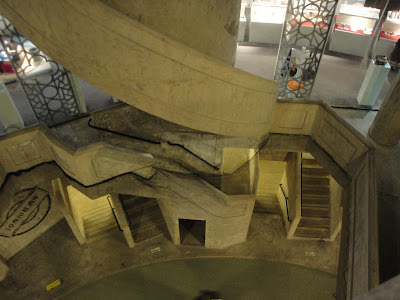 Occupancy was still a little sparse, which made the place even that much funkier.

By this point, we were pretty beat, so back to the hotel for a nap, and then dinner in the neighborhood.  Our trip is starting to wind down; two days left before we head back to the U.S.
CHECK BACK SOON, Dr. Plotnick’s China Travelog continues.