My Travels in China: Beijing Day 5

Today is our last full day in Beijing.  I’m still a little disappointed in the number of cats I’ve seen, but as you’ve been reading, I’ve been having a great time regardless.

The Old Summer Palace is known as Yuanmingyuan, which translates as the Garden of Perfect Splendor.  It was extolled as the “Garden of Gardens” and the “Versailles of the East” during its heyday. It was an imperial summer resort painstakingly built and repeatedly expanded under the personal supervision of five emperors of the Qing Dynasty.  It is located in the northern part of Beijing, and is pretty huge, as you can see in this map. 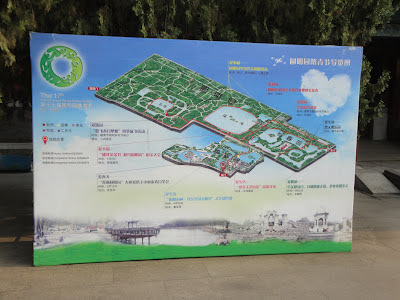 Yuanmingyuan was not only famed for its beauty. It was also an imperial museum with a vast collection of cultural treasures. Alas, the skill and sophistication of the builders of this historic “Garden of Gardens,” and the cultural treasures contained within it, failed to escape the destruction inflicted on China by the Western powers. In October 1860, the Anglo-French forces sacked and looted Yuanmingyuan and burned it to the ground. Yuanmingyuan has since undergone great changes. The Chinese government has attached great importance to the preservation of the ruins. The district and municipal governments have placed Yuanmingyuan on a list of key cultural sites under special protection. Residential land has been requisitioned, and massive reforestation efforts have been carried out. Decades of painstaking work has turned half of the garden into green groves teeming with hundreds of thousands of trees.  It truly is a beautiful, peaceful garden.

Luckily for me, the first thing I spotted upon entering the gardens was this cute long-haired calico kitty. 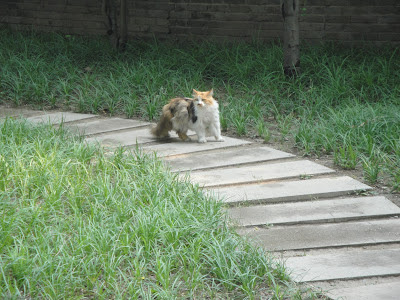 She turned out to be pretty friendly. 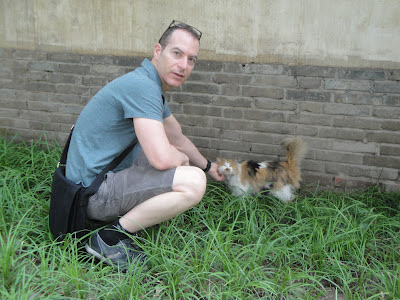 There were lots of peaceful ponds, cute stone bridges, and serene willow trees 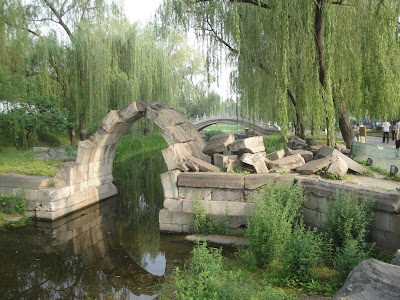 I spotted a black cat by a rock, also enjoying the scenery. 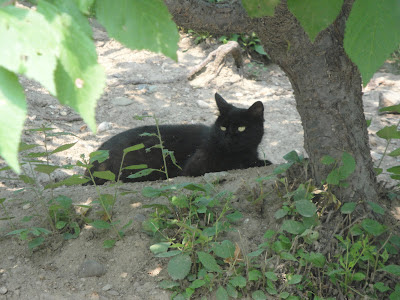 I could have spent all day here, but we had many other things on the agenda, namely, The Summer Palace.  Also known as Yiheyuan, this palace was built in the late Qing dynasty to replace the Old Summer Palace that we just visited, after it was destroyed.  It was created by the Empress Cixi.  Although it’s more popular than the Old Summer Palace, I preferred the old palace, as it was much more serene  You can see the Summer Palace is teeming with tourists. 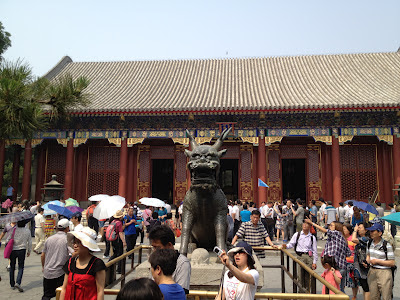 As in every classical Chinese garden, water and mountains make up most of the landscape.  The grounds cover 10 square miles, three-quarters of which are occupied by Kunming Lake.

We ambled down the Long Corridor, a corridor that runs for 765 yards, parallel to the northern shore of Kunming Lake.  The corridor is decorated with countless scenes from ancient Chinese mythology. 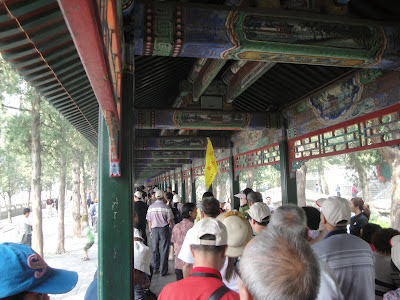 At the end of the Long Corridor, you begin your ascent to the amazing Buddhist temple at the top of the hill. 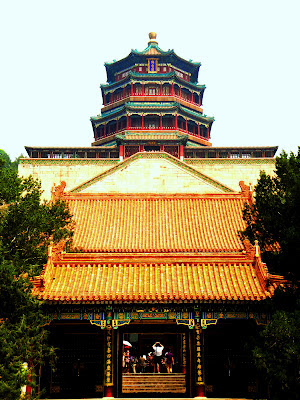 There were a lot of steps to climb to get to the temple at the top, but the view from the top, of the other palace buildings and the boats peacefully drifting along Kunming Lake, was worth it. 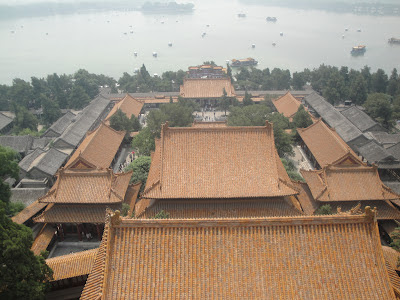 And now for something completely different.  After spending the morning in parks that were steeped in history, it was time for a little modernity.  So we hopped in a cab and headed toward the 798 Art District. 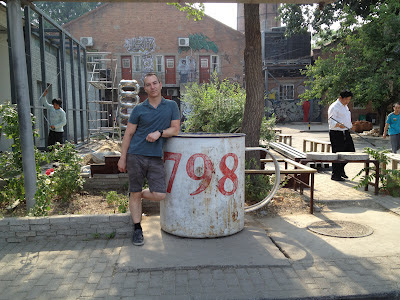 The 798 Art District is named after the 798 factory which was built in 1950.  The area is a showcase for modern art.  The area occupied by 798 Art Zone was once the place for  the Beijing North China Wireless Joint Equipment Factory. Afterwards, the corporation moved out of the area and leased those plants (798 factory being one of them). The architectural style, featuring simple design and varied composition, follows the Bauhaus style. Many art organizations and artists came to rent the vacant plants and transformed them. Gradually there formed a district gathering galleries, art studios, cultural companies, fashion shops, etc. As the area where the early art organizations and artists moved in was located in the original area of the 798 plant, this place was named 798 Art Zone. Nowadays, 798 Art Zone frequently holds important international art exhibitions and art activities as well as fashion shows.  There were many interesting public artworks dotting the street, 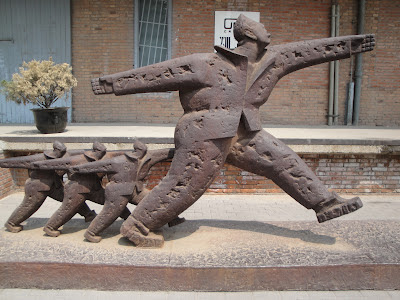 some of which were interactive 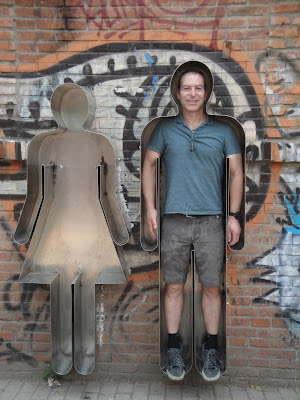 and some of which, um, were probably not meant to be 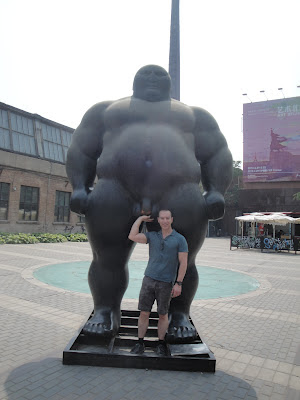 While strolling around the art district, I spotted a very cute tomcat sleeping under a car. 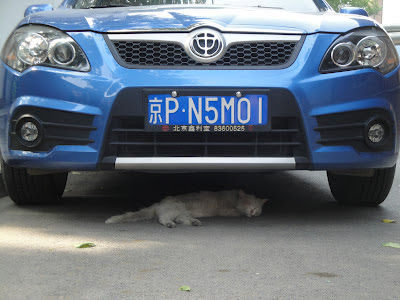 In keeping with Beijing feline tradition, no matter how I tried to get his attention, he just couldn’t be bothered waking up to acknowledge me, so I just contented myself with snapping a few pictures.  I got a really nice close-up of his cute little face. 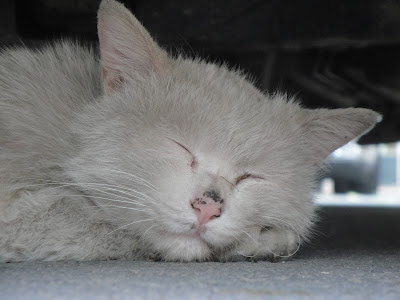 I also found a cute cat in one of the shops, but that’s about it. 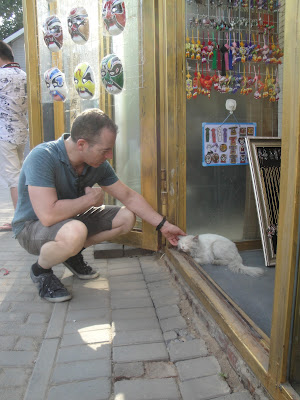 With tonight being our last night in Beijing, we had to give Peking Duck a try.  There’s much debate as to which restaurant serves the best.  Our tour guide, Vivie, told us to steer clear of the well-known tourist destinations, and she directed us to a local restaurant known for its excellent Peking Duck.  Frankly, I never liked duck, and this fancy-shmancy Peking Duck, ritualistically carved by our server, did nothing to change my mind. 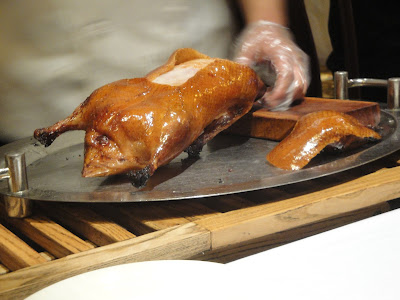 Well, at least now I can say that I’ve tried it.

Back to the hotel.  Our Beijing stint is nearly complete.  Tomorrow’s agenda: Pandas!!

Manhattan Cat Specialists is about to send out it’s Summer Time Feline e-Newsletter.  Add your email address to receive summer health info for kitty. Click below.