(Continued from Day 4, Part 1)
After lunch we strolled down a street called “Tobacco Alley”, which had more cute shops and stores.  This then led to a series of hutongs (old historic alleyways) that were very commercialized, but very cute and quaint, the most popular one being Nanxioliu. 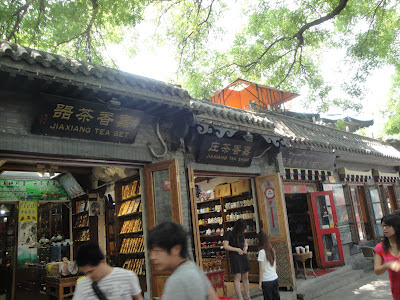 I was on a mission to find what was described as a great t-shirt store, called Plastered T-shirts.  I found it, and was duly unimpressed.  However, right across the street, I found something pretty interesting.  Nanxioliu is a historical alley that underwent a massive face-lift in August 2006. During renovations, an original Cultural Revolution slogan painted on a building’s brick face was uncovered. While the rest of the alley was treated to a fresh paint coat, the resident community group decided that the slogan should be preserved. According to my guidebook, the so called “protected slogan” is right across from Plastered T-shirts.  Sure enough, although faded, it was right there. 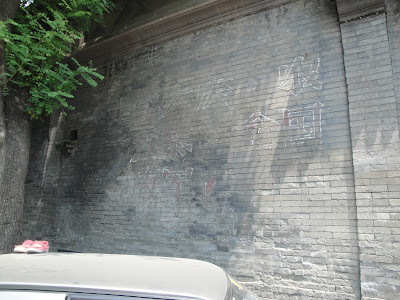 The red-painted characters state: “Learn industry from Daqing, agriculture from the model villages, and the whole nation should learn from the People’s Liberation Army!”

Our next stop was the Drum Tower and the Bell Tower.  These two towers are the legacy  of Kublai Khan.  He had the original ones built nearby to serve as the imperial clock.  The Drum tower used to hold 24 giant drums.  They were beaten to mark the closing of the city gates and the passing of the night watches.  The bell struck the time of day.  As with most Mongol buildings, the towers were replaced in 1420 during the Ming dynasty.  The Bell Tower, which was made of wood, burned down and was rebuilt of stone in 1747.
Today was the hottest day so far on our trip – a blistering 94 degrees.  Mark was melting in the heat, but not me.  I love the summer.  For me: the hotter, the better.  Even in the  heat, it was no problem for me to climb up the very steep steps of the Drum Tower. 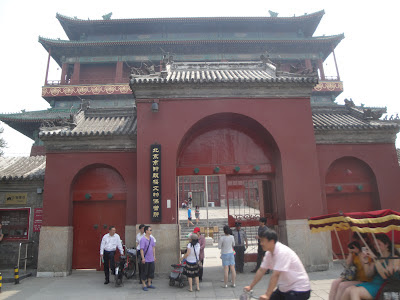 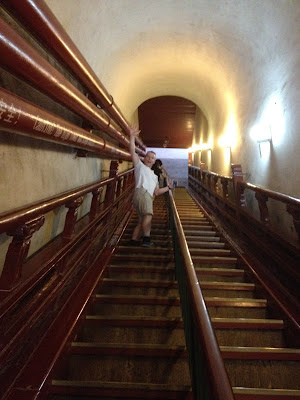 The climb was worth it, as we were treated to a nice view of the Lake District (and  Beijing’s infamous smog) at the top. 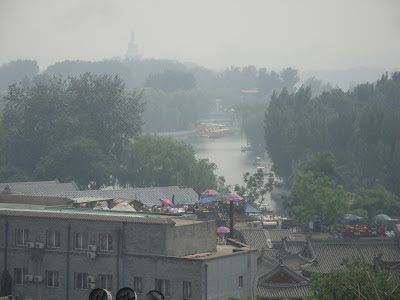 We then went across the street to the Bell Tower, which is more interesting structurally. 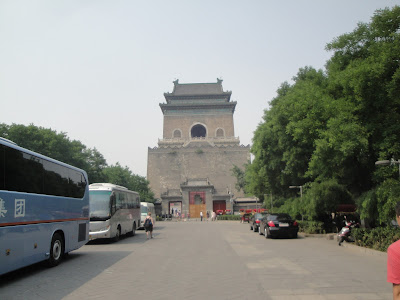 Despite the oppressive heat, we climbed up yet another insanely steep flight  of stairs, just to get a gander at the big bell. 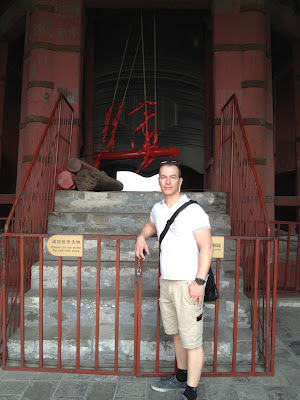 Our final stop on our grueling,  pre-planned itinerary  was Yonghe Gong, also known as The Lama temple. 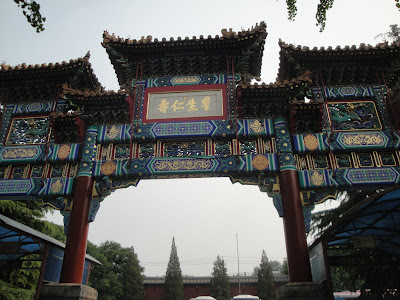 The  name Yonghe Gong actually translates to “The Palace of Peace and Harmony”.  It is one of Beijing’s top tourist attractions, with many lovely courtyards and impressive offerings, such as the 20 foot tall bronze statue of Tsongkapa, the founder  of the now dominant school of Tibetan Buddhism 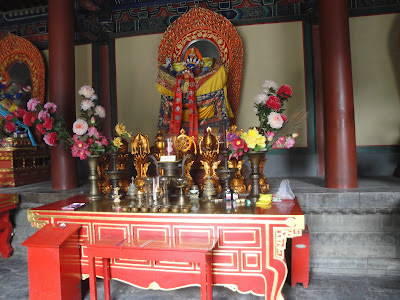 and, located in Wanfu Ge (The Tower of Ten Thousand Happiness), the ominous 59 foot tall Tibetan-style statue of Maitreya (the future Buddha), which was carved from a single piece of white sandalwood. 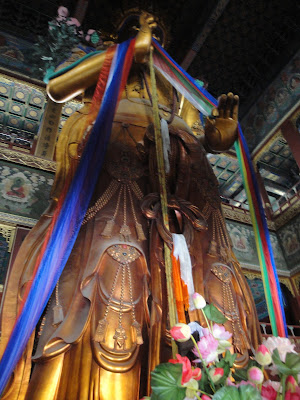 It was pretty awesome.

We were supposed to go to the Confucius Temple afterward, and perhaps Ditan Park after that, but this was turning into a pretty strenuous day, and we were getting park-and-templed out.
Exhausted, we cabbed it back to the hotel.  Mark hit the bed and was out like a light.  I was pretty sore from all the walking in the sweltering heat, so I took a shower, and then heeded my guidebook’s recommendation and took advantage of the super-low prices for massages in China.  I hit Dragonfly Spa, right down the street from our hotel.  Both of my guidebooks recommended this spa as a high-class, peaceful oasis from the hustle and bustle of Beijing.  I ended getting an incredible Japanese shiatsu massage from a Japanese masseuse for just under $40.  I was a new man, and ready to tackle the Beijing subway system.  Being a native New Yorker, I figured out their  metrocard machine pretty easily (aided by the  “English”  option on  the  screen), and we were off to the eastern part of town to try a different type of cuisine – food prepared by the Uighers.  (Pronounced “wee-gur”.) Most Chinese are Han Chinese, although China does have many ethnic minorities.  The Uighers are Chinese Muslims, and their cuisine is very lamb-based as a result.  Both of my guidebooks recommended the Crescent Moon Restaurant.

I ordered the highly-touted lamb skewers and the macaroni type noodles.  It was good, but nothing to write home about. I have to confess, so far I have not been impressed with the food in Beijing.  C’mon, I’m a New York Jew.  I am not unfamiliar with Chinese food. It reminds me of when I went to Italy.  The best pizza I ended up having was right back here  in New York City.

Manhattan Cat Specialists is about to send out it’s Summer Time Feline e-Newsletter.  Add your email address to receive summer health info for kitty. Click below.