(Continued from Day 3)
I woke up Sunday detoxified of smoke, and was ready to head out to Beihai Park, a lovely park just west of the Forbidden City. It is one of the oldest, largest, and best preserved ancient imperial gardens.  It is a classic combination of the grandiosity of China’s northern gardens and the refinement of China’s southern gardens.
The park has a big lake with an island in the center. 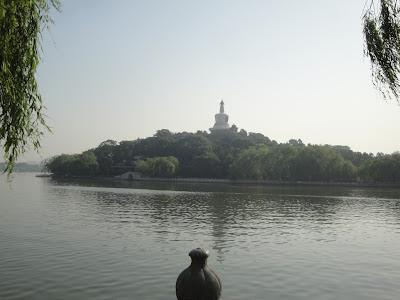 As I mentioned in a previous post, the elderly in China love to exercise, either alone or in a coordinated group, in public parks in the early morning, and Beihai Park was no exception. 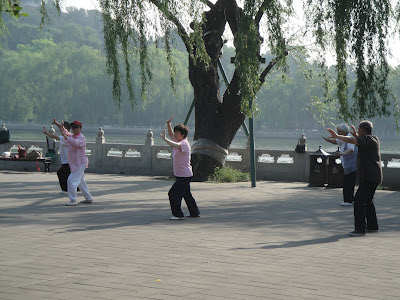 There were lots of people singing and playing music.  Everyone really seemed to be enjoying themselves.  One  of the neatest things I saw were men doing “water calligraphy”, where they dipped their brushes in water and wrote on  the concrete. 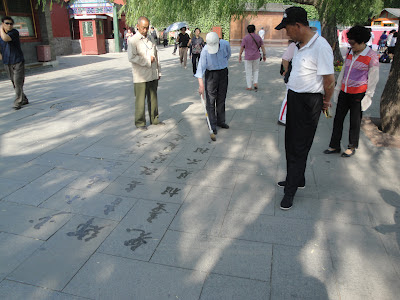 To the northwest lies the well-known Nine-Dragon Screen.  Among the three Nine-Dragon screens in China (there’s one  in the Forbidden City and one in Datong in the Shanxi  Province), the one in Beihai Park is the only one having nine huge dragons on both sides.  Built in 1756, the Nine-Dragon Screen is about 89 feet long, 22 feet high and 4 ½ feet thick. 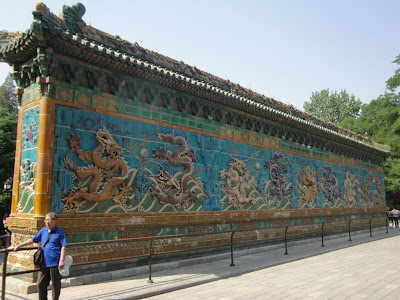 It is composed of 424 seven-color glazed tiles embossing the screen. There are nine huge coiling dragons on each side of the screen and big or small dragons in different postures decorating the two ends and the eaves, making a surprising total of 635 dragons. Even after 200 years, the Nine-Dragon Screen is still bright in color and complete in appearance, showing the high techniques of Chinese arts and crafts in ancient times. 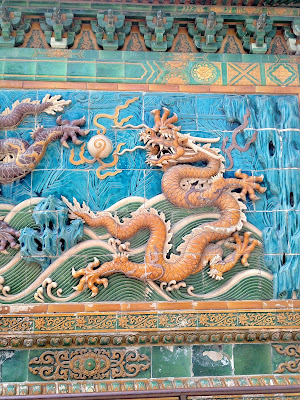 Frustratingly, I hadn’t encountered many cats on this trip at all, but I finally found an old, sleepy cat in Beihai Park. 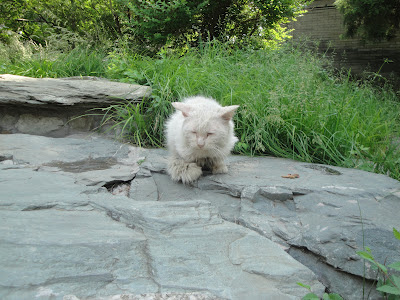 He looked like one of the wise old Chinese sages depicted in much of the Chinese artwork I’ve been seeing on this trip.  He seemed more interested in sleeping than in being patted, but he indulged me a few pats before going back to sleep. 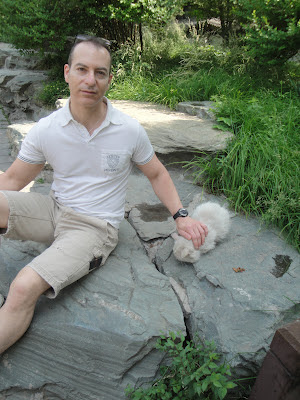 We finally exited at the north of the park and continued on to Houhai Lake and Quinhai lake.  This area, north of Beihai Park, is often referred to as The Lake District.  There are three lakes just north of Beihai Park, with Houhai and Quinhai being the most popular.  The banks of these lakes are overflowing with alfresco bars, cafes, and the odd curio shops. It wasn’t always this way, however. These banks were once exclusive areas for nobles and merchants. Prior to 1911, only people with connections to the imperial family were permitted to maintain houses and conduct business here.
Strolling the area, I came upon a tea house, and the resident tea-house kitty.  She, too, pretty much ignored me as I tried to engage her. 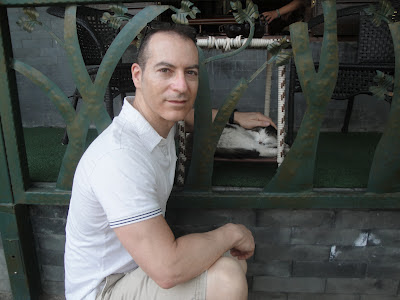 Normally, I’m The Cat Whisperer, but today I seem to just be whispering them to sleep.
We crossed Yinding Quao, also known as the Silver Ingot Bridge, the little bridge that marks the  boundary between Qianhai Lake and Houhai Lake.  This turned out to be a nice spot to watch boats drifting along below. 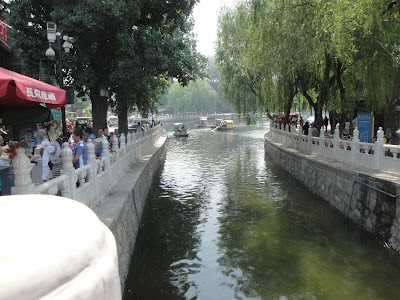 We decided to try a “hot pot” restaurant in Beijing.  This is a popular form of dining, in which  you cook your food at the table yourself, in a giant simmering metal pot at the center  of the dining table. Our tour guide, Vivie, knew we were going to the Lake District today, so she recommended a good hot-pot restaurant in the area, called Nan Men. 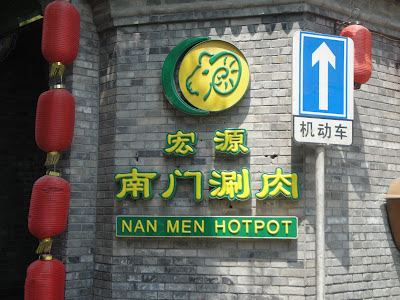 I know it’s childish, but I still find translational humor kinda funny.  Check out these signs in the restaurant: 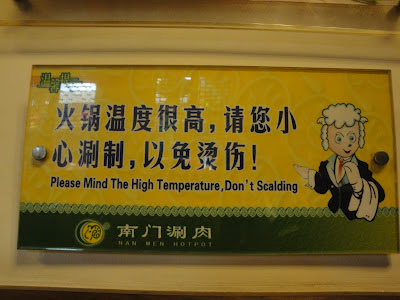 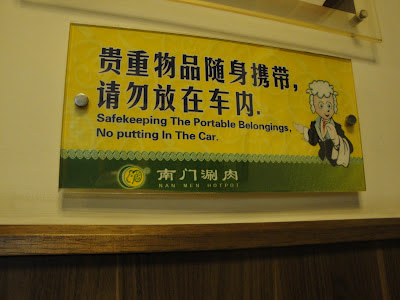 Anyway, here I am, enthralled by the giant hot pot. 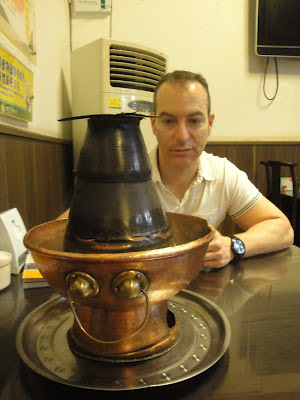