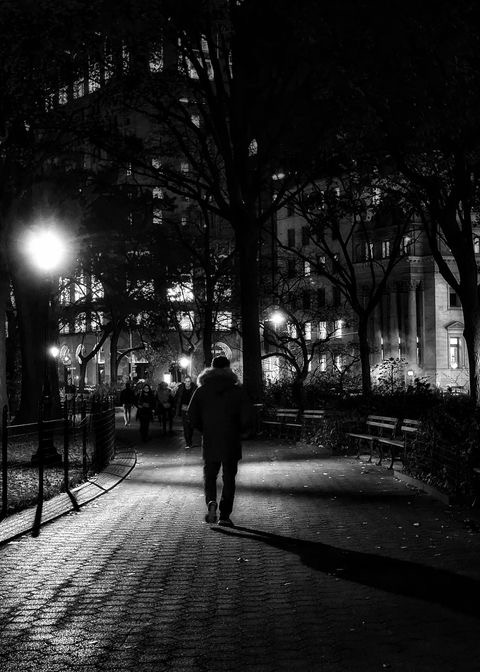 As I mentioned in a recent blog post, I undertook a cool photo project in 2021.  I endeavored to take at least one new, interesting photo every day, whether I was in the mood or not.  Being forced to think about photography every day definitely opened my eyes to photographic subjects and opportunities that I definitely would have passed by or ignored had I not been deliberately attuned to my surroundings.

When going through the 365 photos, several categories and patterns emerged.  One category was night photography.  Only about 3% of the photos were taken at night.  That’s 12 photos.  Here, I’m presenting the eight best.

The first one in this post is the first one of the project.  Day 1 (January 1st) had me capturing a guy going up the stairs of a dramatically lit subway station on the upper west side in the evening.  The street lights and the overhead lights combined to give the walls of the stairwell a really nice glow.

The Empire State Building figures prominently in several of the photos (necessitating a blog post, in a few weeks).  In this photo, the glowing red and blue lights and the motion of the car nicely captures late night NY.

I spent the month of August in Amsterdam.  At night, the lights reflect off the surface of the water on the canals. There are many nice spots to choose from, but this one really caught my eye.

I was in midtown, and had just taken some photos of this woman as she talked on her cell phone in front of a shop window.  The lights in the window were changing color, which cast vivid color reflections on her.  After she hung up her phone, she took out a cigarette, and I thought this pose gave her a timeless, European movie star look.

While walking home from a museum, I passed by this subway entrance on 28th Street.  The light emerging from below ground was a little striking, however, I suspected that if I had lowered the exposure, it would be much more dramatic.  I’m very happy with the final result.

Late in the evening, Mark was surfing the internet on his laptop.  All the lights in the apartment were off, and it was very dark outside.  I like how the bright light from the screen reflects off his shirt, the leather couch, and his skin.  I thought it was cool that the source of the light can be seen in the lenses of his eyeglasses.  A nice portrait.

While heading to a concert at Fotografiska (the photography museum) in the Flatiron area, Mark and I decided to cut through Madison Square Park.  The park was nearly deserted and the glowing street lamps were casting dramatic shadows.  I let Mark wander ahead of me, and then grabbed a shot that showed that we’re in a city (the building in the back) and a park (all of trees.)

Again, while walking home from Fotografiska one evening, I passed by the Krispy Kreme shop on 23rd Street.  The light in the doorway was dramatic, and there was a lot of traffic in and out of the store.  I liked the red color of the sign and the green color of the door, I waited until a few people had accumulated beneath the light, and then grabbed the shot.

In the next few weeks, I’ll share some more of my favorite shots from the project.