Regular readers of my blog know that I like street photography, and that last year I purchased a camera that was designed for the street: the Ricoh GR III.

Street photographers rave about this camera for several reasons, the main ones being the small size, the super sharp images it produces, and the image settings (particularly the black and white settings, most notably the high contrast option.)

The Ricoh GR III has a fixed focal length of 28 mm.  This is kind of wide.  If you take a survey of street photographers, you’ll find that half of them feel that 35 mm is ideal for street photography, while the other half prefer 50 mm.   Personally, I also find 28 mm to be too wide for my liking, but so many fans of the Ricoh have said that a 28 mm lens ultimately helps you become a better photographer that I gave it a shot.  They said you get better at composing your photos, because with so much in the frame, you really have to get close to your subject to fill the frame, removing all that extraneous stuff on the edges.   You can’t get good bokeh at 28mm, so you can’t use bokeh as your gimmick to draw attention to the subject of the photo. Instead, you have to rely more on composition technique. Shooting at 28 mm challenges yourself, which is always good in photography, they say.  It’s good to get out of your comfort zone, they tell you.  Blah blah blah.

The bottom line for me was: I don’t like shooting at such a wide angle.  This meant that my Ricoh GR III sat on my desk. I felt silly spending money on an iconic, beloved-by-many camera, and then barely use it.  I would just use my iPhone instead. Speaking of iPhones, if I use my iPhone 11 Pro as an example of how I use lenses:  the iPhone’s 1x lens is 26mm, and the 2x lens is 52 mm.  Which lens do I use more when I’m out shooting street photography?  I probably use the 52 mm lens 70% of the time and the 26mm lens 30% of the time.  If the iPhone had a 1.5x lens option (39mm), I’d probably use that almost all of the time.

A few weeks ago I was looking at photos in some of my Facebook photo groups, and I noticed that one of the Ricoh groups had incorporated the term “Ricoh GR IIIx” in the title.  It was there that I discovered that Ricoh was releasing this new version of the Ricoh GR.  The Ricoh GR IIIx is nearly identical to the GR III in every way, except for the lens:  40 mm!  Perfect!

I sold my barely used GR III and ordered a GR IIIx.  It arrived two weeks ago.  I haven’t used it much, mostly because it’s gotten pretty cold outside, and I don’t like doing street photography when it’s nippy out, but so far I like it a lot.  It still offers up great color, and still takes sharp photos.

Glitter has always been my photographic muse, and I’m going to use her for this post, since she wasn’t moving much.. Here are some examples of the different image modes, taken with the GR IIIx. (Note: it’s a grey, gloomy day, so you’re not going to see a lot of color.  Anyway…)

Below is another popular color mode, the Positive Film mode.  It’s supposed to be reminiscent of old color slide film. It’s my favorite of the color modes.  Unfortunately, the scene doesn’t have much color in it, so it’s not a great pic for comparing color modes.  The only colorful thing, (Ed van der Elsken’s photobook “Feest”) isn’t in the photo.  Sorry.

I didn’t take a picture using the Vivid mode. Whoops.

And finally, the High Contrast black and white that Ricoh users go nuts over, but I find just too contrasty for my liking.

The Ricoh does have a crop setting, which does allow you to shoot at a closer angle, but you lose resolution when you do it.  On the GR III, the two crop modes let you shoot at 35 mm and 50 mm, the two focal lengths that street photographers really like.  It’s possible to customize buttons on the camera, so you can just press a button once and it’ll go to 35, and press again and it’ll go to 50.  Frankly, that probably would have just solved all of my focal length issues, however, I have a really nice printer at home, and as I get more into photography and I start printing more, that loss of resolution may become visible in the prints. Most Ricoh users don’t use the crop mode, and neither do I.

FYI, the crop modes on the new GR IIIx now allow you to shoot at 50 mm and 71 mm.  I stayed in the same position and took pics of Glitter at these crop modes. I didn’t move closer.  Here’s 50 mm:

If I find myself wanting to just experiment and see what it’s like shooting at 50 mm, like so many street photographers do, I can give it a try, especially if I’m just messing around and not taking pics that I would ever want to print.  Not sure if I’d ever need to shoot at 71 mm with the Ricoh, but at least I know it’s an option.

Anyway, here are some street pics I took recently with the GR IIIx.  Ya gotta love this lil’ thing. 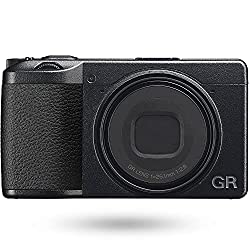