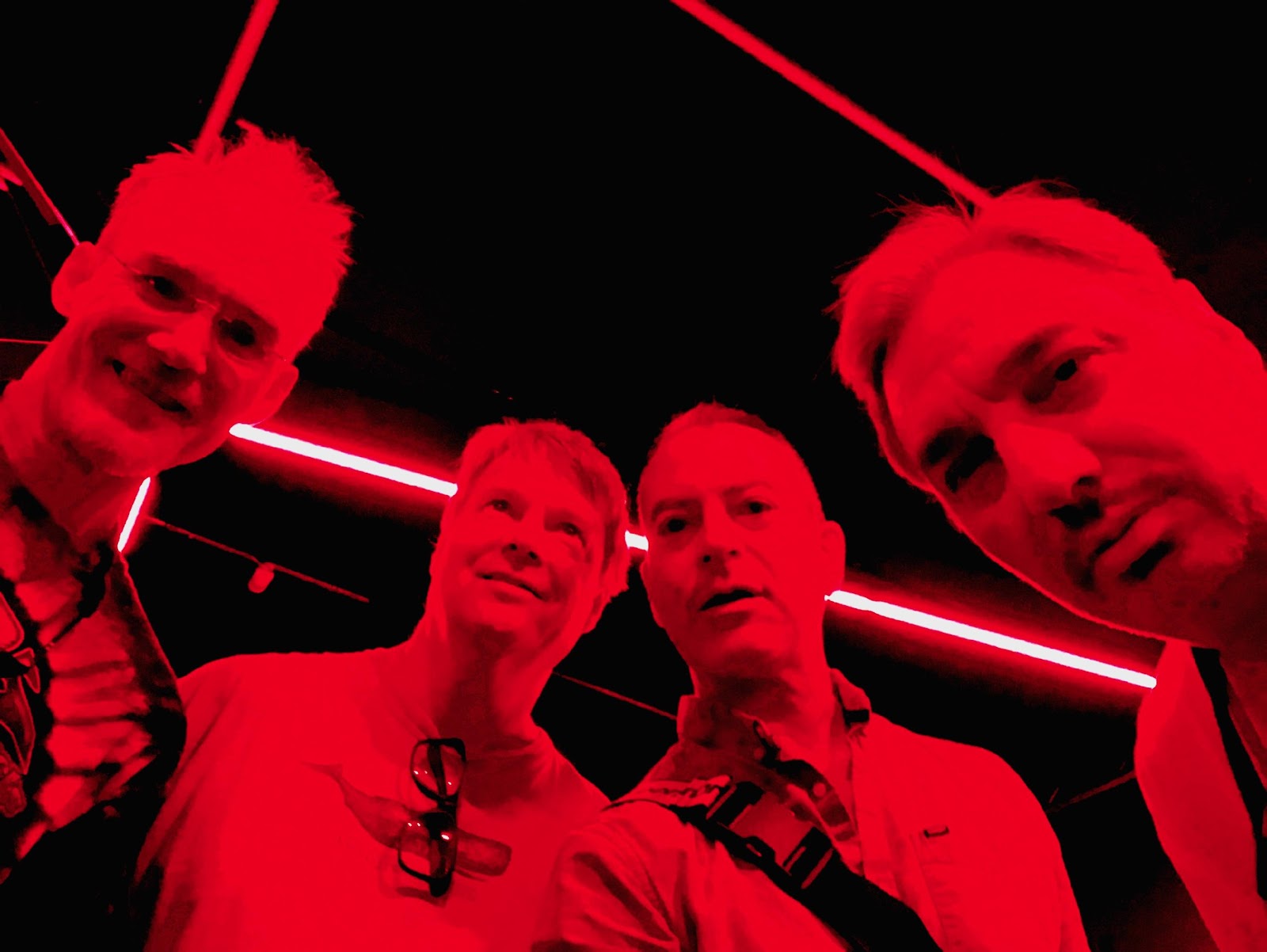 Men Of The Woods in Amsterdam Pt.5 – The Grand Finale

Monday was the last full day with all four of us, and it was really a terrific day.  We saved the best museum, the Van Gogh, for last. There was a fascinating temporary exhibit about his painting, The Sunflowers.

First we attended a short talk about the painting.  Apparently, after he painted it, Van Gogh felt that the uppermost sunflower was too close to the top edge of the canvas, so he extended the length of the canvas adding a strip of wood across the upper edge of it.  X-rays revealed the strip, and the nails, and it was determined that Van Gogh himself hammered in the nails. We then checked out the real item. Photos were prohibited, but I managed to sneak one when the guard wasn’t looking.

There was another temporary exhibit about how many of Van Gogh’s paintings were like dreamscapes.  In the exhibit, there were separate rooms that had something surreal or dreamy installations. The rooms were interesting and colorful, like this one with strange lucite flowers.

In these rooms, the group selfies were definitely album cover material.  Like this one.

The next room was another weird dreamscape, with everything bathed in red.

This room gave rise to the best album cover group selfie of them all.

After viewing these temporary exhibits, we went back to the permanent collection. This was my fourth visit to this museum over the years, and I never get tired of it.  Photos weren’t allowed, but of course, that’s a rule that I often violated.

The view of the museum from the balcony is pretty nice, and was a great place for another album-cover group selfie, which I took despite the security guard’s vocal objection.  For heaven’s sake, I’m not taking photos of the precious artwork.

Anyway, after the museum, we took a stroll through the Red Light district.  Photos of the girls in the windows are not allowed, and this was a rule that I did not violate.  In this area, there are also a lot of coffeeshops.  The most popular one is The Bulldog. All that weed smoking affects their ability to do math, apparently.

Chaz and Rosen again popped inside, to get supplies for tonight’s concert.  Plumeau waited outside, but he wasn’t alone.

Music played a big role during our Binghamton days. It was a constant presence.  While I brought an enthusiasm for punk and new wave into the mix, our true love was definitely for classic rock, and one of our top groups was Pink Floyd.  They were definitely Plumeau’s favorite group. In fact, we painted the logo from the Wish You Were Here record label on the wall of our suite at Binghamton.

So it was some amazing kind of synchronicity that the Paradiso, Amsterdam’s famous music venue, was commemorating Pink Floyd’s last appearance at the club 50 years ago by featuring a Floyd tribute band.  I saw the show advertised on a flyer in a record store where I was browsing, and I couldn’t believe it! They were playing on the last night of this trip! I zoomed home after seeing that flyer, went online, and snagged tickets immediately.

There’s no disputing it:  Pink Floyd’s music sounds best when you’re in an altered state of consciousness.  What better circumstance is there to revisit those altered states than in Amsterdam, with your college pals, at a live Pink Floyd tribute show?  So, while Chaz and Rosen indulged in their recently purchased space cakes, Plumeau and I went the more conventional route, splitting a joint between us.

The Paradiso was pretty cool inside.  There was a nice stage, lots of room to move around, a bar in the far corner, and places to sit on the edges of the room.

The opening act was a girl in a green dress with an acoustic guitar, singing suicidal songs in a flat breathy monotone. We had no idea who she was. I wasn’t sure how effective Chaz and Rosen’s brownies were working, but Plumeau and I were totally baked.  As I listened to this skittish little waif singing her sad songs, Plumeau asked me if I had any idea who she was. I said I didn’t know, but that for our purposes, we should just call her Skittish Waif. This caused us to break up in total hysterics. Yes, we were stoned indeed.

Finally, the tribute band came out.  They used to be called The Use of Ashes, but they updated their name, and I don’t remember what they were calling themselves now.  They started the show with a very slowed down, psychedelic version of Arnold Layne, a fantastic song from the Syd Barrett era. It was the perfect start to a great show.  A few weeks before, I took the train to Connecticut to get together with Plumeau to attend Nick Mason’s Saucerful of Secrets. Mason is Pink Floyd’s drummer, and his psychedelic concert tour features songs dated pre-Dark Side of the Moon.  To our delight, the band tonight was doing the same thing, focusing on songs from the Syd Barrett era. The band was being very faithful to the original recordings, which I admired. I actually found a video of theirs, doing Arnold Layne.

Here’s a snippet of them doing it live in Amsterdam tonight.

During the show, Chaz and I decided to move up to the front of the crowd, and we went right up against the stage.  Great views of the band.

The show was really much better than I think we all expected.  The band, the lights, the venue… it was all just perfect.

We leisurely strolled back to the apartment, and the Plumeau and Rosen packed up their stuff for their flight the next day.  Chaz told me that he’d be staying an extra day. His daughter was going to be flying to Amsterdam on Tuesday, and they would both then visit his sister, who lives in the Netherlands.  Well, Chaz miscalculated with the dates. His daughter was actually coming in on Wednesday. This allowed Chaz and I to spend the entire Tuesday together. I rarely get to see Chaz. To be able to spend an entire day chatting and hanging out is a real treat.

Plumeau and Rosen departed. Chaz and I took a tram to one of my favorite restaurants, Waterkant.  The place overlooks a canal, and has an eclectic menu that includes Surinamese dishes. We got some cider, and some Surinamese food and hung out by the water.

We then trammed it to Westerpark to the Tony’s Chocolonely flagship store for some more chocolate samples.  The staff are probably starting to recognize me by now (as the guy who comes in, scarfs up a ton of samples, then leaves.)  I got a cool photo of Chaz in front of the rainbow wall of chocolate bars.

We then went into the park, found a nice spot on the grass that overlooks the park’s central pond, and spent a few hours just talking about life.  It’s rare to have each other’s undivided attention like this, and I really enjoyed it.

Chaz was due to depart the next day, and I was to depart the day after that, so we had to eat all of the food that was in the fridge.  For dinner, we ate the last of the cold cuts and bread, and just as we finished, Udi called and asked what we were doing for dinner. I said that we had just eaten, so he said he would grab something from the store and come by, and hang out.  He came over, popped his meal in the microwave, and we all sat around and chatted.

The next day, Chaz’s daughter arrived.  She had recently spent a summer in Amsterdam and knew her way around pretty well, so we didn’t need to pick her up at the airport or at Central Station.  She made her way to our apartment on her own pretty easily. The three of us went to lunch, and later that day, Chaz and Hannah departed for Dwingeloo, the town in the Netherlands where Chaz’s sister resides.

I spent the rest of the day walking around, enjoying my last hours in this beautiful city this summer.  I strolled down Rozengracht, one of the loveliest streets here, and then had one more cider at Café Luxembourg, where I was treated to an impromptu breakdancing performance by some amazingly athletic young dancers.

This was definitely the best summer I’ve spent here.  Having friends visit makes all the difference, and I’ve lived here long enough now that I really feel more like a resident than a tourist.  I’ll be back in the winter for two or three weeks, to take the next level of my Dutch class, and definitely again next summer, hopefully with more friends visiting.