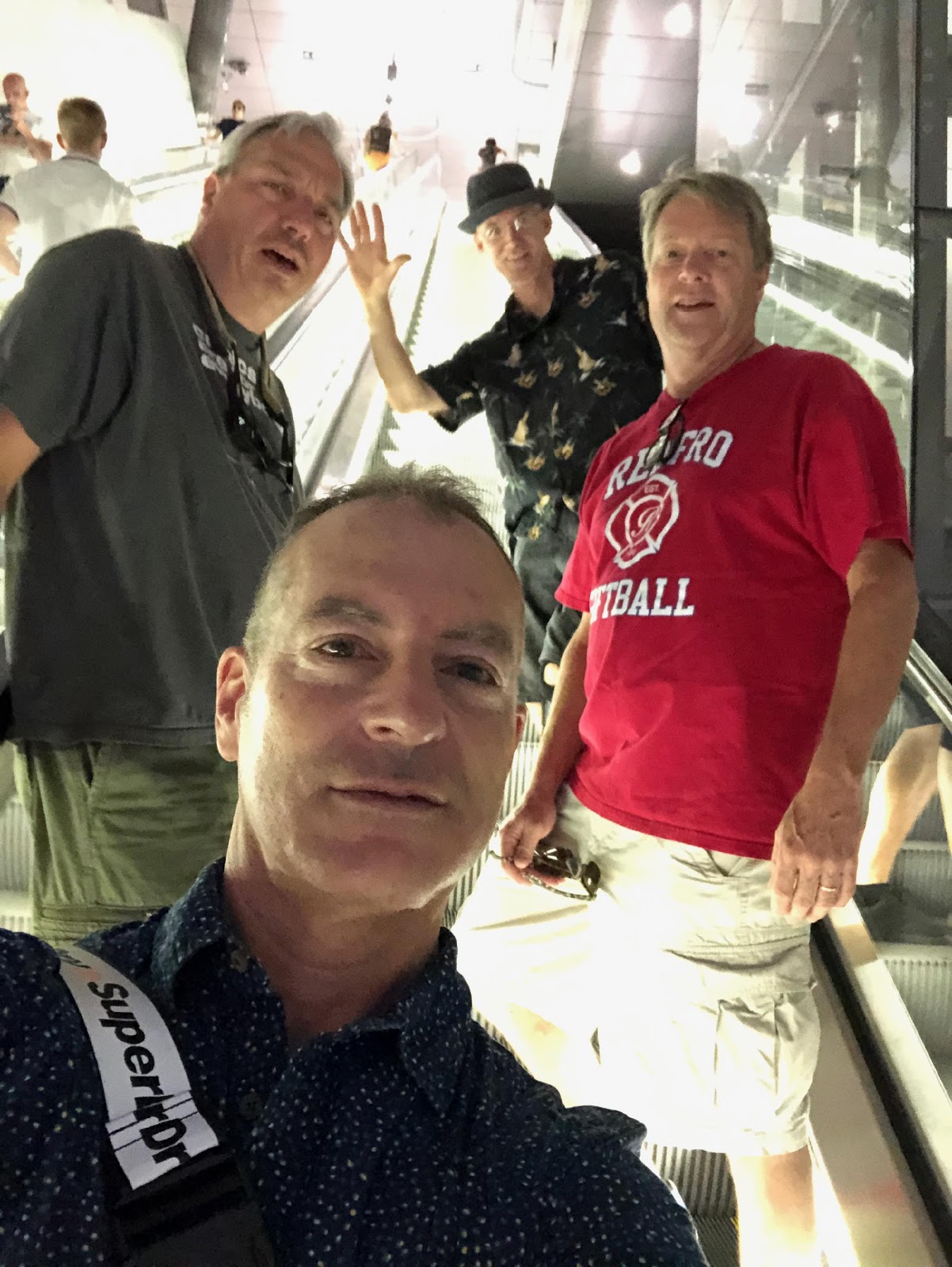 Men Of The Woods in Amsterdam Pt.4

On Saturdays, there’s a nice farmer’s market called Noordemarkt, on the northern part of the Prinsengracht.  The plan was to check it out, and since Udi lives close to the market, pop by his place, introduce the guys to him, and show them the joys of a canal-view apartment.

The market was very nice, as usual.  Lots of fresh fruits, breads, and pastries.

Rosen was able to indulge in his newfound obsession for stroopwafels, which were made fresh to order right there while you wait.

The market also features all sorts of other items for sale – shirts, sunglasses, bedding, etc., and we perused all of the merch, but didn’t buy much.   Udi was off getting his hair cut, so we timed our arrival at his apartment with his return from the salon, and met him in front of his building. I foolishly didn’t take any photos of him and the guys, but I got Udi to take a nice pic of the four of us on his windowsill.

The big event for the day was a trip to The Heineken Experience.  We were going to figure out how to get there by tram, but Udi reminded me of the recently built new metro station that stops just a block away from the brewery.   After cappuccinos at Udi’s (he’s such a proper host), we said our goodbyes and strolled to the metro stop at Central Station. Although I have been teased for having and using a selfie stick, I’d been taking nice pictures of the four of us together, and we remarked that some of them looked like they could be album covers.  Well, I took a selfie of us on the escalator in the metro station, and I think this picture would make a great album cover. (Later on in the trip, I would take one of us in a room with blood red lighting that would prove to be even more album-like, but you’ll have to wait for that one.)

We got to the brewery pretty quickly.  Tickets for the Heineken Experience have to be purchased online in advance, and once again, we had Barry’s extra, sadly unclaimed ticket.  This time, however, Chaz was in fine form, and he managed to sell Barry’s ticket to an attractive blonde woman in the ticket line.

Unlike the other Men of the Woods, I have zero interest in beer. I have to admit, however, the Heineken Experience was pretty impressive.  It’s really part museum, part arcade, and part amusement park. There are historical exhibits, like photos of the original brewers, and the evolution of the Heineken bottle over time.

There are also demonstrations of how the beer actually gets brewed.  You get to mix up the stuff and play around with it. Chaz was getting into it.

They let you try samples of the unfinished beer, while it’s still in an early stage of brewing.  I thought that was pretty cool.

As the tour continued, you end up in a room with images projected on all four walls, as you simulate the pathway that a beer bottle travels as it goes through the brewery.  Corny? Yeah. Fun? Definitely.

Finally, you get to sample the finished product (in a pretty small glass), and then the tour part of the experience is kinda over.

The rest of the time is spent playing games and taking photos. There was a wall of green Heineken bottles, and we ran into the woman who bought Barry’s ticket.  She was trying to take a selfie in front of the wall. Chaz offered to take the photo for her.

One of the games on offer was a simulated bartender station.  You had to fill a beer glass with Heineken from a fake tap, and turn the glass just at the right time so as to get the perfect amount of foam.  Chaz gave it a try. Then Rosen gave it a try. Chaz commented at the end of Rosen’s attempt, “You had less head than I did.” I held my tongue.

Plumeau then kicked a simulated soccer ball, and after a failed first attempt, managed to score a goal.

I guess this allowed him to claim the gold on the pseudo-Olympic pedestal.

We finally came to the last room of the tour: the bar.  There’s a pretty happenin’ pub inside, where you can finally cash in your two little tokens (they come attached to your wrist band, given as you enter) for beers.  Chaz and Rosen’s prior attempts to pour the perfect beer at the simulated tap set the stage for the real thing, because in the bar was a contest to see who could pour the perfect beer, and this time, you use real taps.  Chaz and Rosen both entered, along with two girls. The winner? Take a look.

And what did the winner get for pouring prowess?  An enamel Heineken pin!

Chaz, meanwhile, was up to some scheming.  Although his beer wasn’t chosen as the winning pour, it was certainly still potable. While the other contestants treated their beers as contest props and left them on the bar, Chaz wasn’t about to let this one go to waste.  While hanging around the bar, I noticed a cup filled with beer tokens. I pointed it out to Chaz, who jokingly (at least I think) tried to grab a small handful of them. This caught the attention of a female employee, and she was furious.  Chaz assured her he was just joking, but she remained offended. Some people have no sense of humor.

All of us had noticed, during the tour, that one of the attendees was dressed as a matador.  We spotted him again at the bar, and Chaz told him that he admired his outfit and asked the significance.  The guy said that there was no particular significance to it. He just thought it would be fun. He returned the compliment to Chaz, admiring his Heisenberg-esque appearance.

It was finally time to leave. Of course, you have to exit through the gift shop.  They had quite the array of things to buy, including special edition bottles of Heineken, like Pride Heineken and Van Gogh Heineken.

They also had every size and variety of beer glass, and I spotted the perfect gift: a three pack of Heineken glasses, just screaming to be engraved with the names of the other Men of the Woods who couldn’t be with us. I gave the engraver a piece of paper with the proper spelling, and she skillfully engraved the names, freehand, on the glasses.

Although we weren’t thirsty when we left the brewery, we were hungry, so we headed to Albert Cuyp street.  We perused the Albert Cuyp Market for a bit, before reaching our lunch destination: Bazar, a really good middle eastern restaurant with a funky décor.  It’s one of my favorite places to eat. After lunch, we made our way to Museumplein, the big grassy field where the Rijks, Stedelijk, Van Gogh, and Moco Museum are all located.  This weekend was a big festival called Uitmarkt. The edges of the Museumplein are dotted with stages and food stands, and everyone eats, drinks, and soaks up the sun and the music.

It was a perfect way to spend the rest of the afternoon.  We actually stayed until dark, and then took the tram back to the apartment and called it a night.